I was intrigued the second I read that La Bola described themselves as a gastroguachinche. The very essence of guachinches, a unique north Tenerife creation, is they’re rough and ready places to eat cheap, good local nosh. An added attraction was La Bola was nominated as one of the best restaurants on the island for Canarian cuisine. Chef Jorge Bosch was also the winner of the best tapas in Spain’s gourmetapa contest in 2014. A visit was a must; although, it took us eight months to actually get round to booking a table. 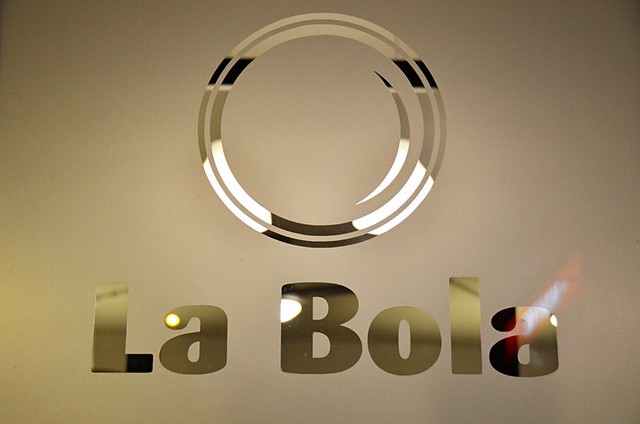 Being located inside a typically bland modern block, from the outside La Bola doesn’t look different from any number of restaurants in similar edifices on Tenerife. We drove past a whole raft of more inviting looking places which had popped up since our last after dark foray into the hills above the north coast, mentally pencilling a date with some for a visit sooner rather than later. A handy landmark for La Bola is it’s opposite the market in La Matanza. There is also parking outside the restaurant which is a godsend in those hills. Although off the beaten track as far as tourists are concerned, restaurants can be rammed at weekends and parking near one isn’t always easy.

As we approached the door I realised we’d eaten there before, shortly after we moved to Tenerife. It wasn’t La Bola then, just a typical traditional restaurant which had stuck in my mind because the pre meal bread and olive oil had been been accompanied by green chillies. Walking through the door it was clear La Bola isn’t a guachinche, it’s a decent sized restaurant with three separate dining rooms, the main one with grandstand views along the north west coast. Even after dark, when the coast was obscured, the twinkling lights from the Orotava Valley made for an enchanting vista. 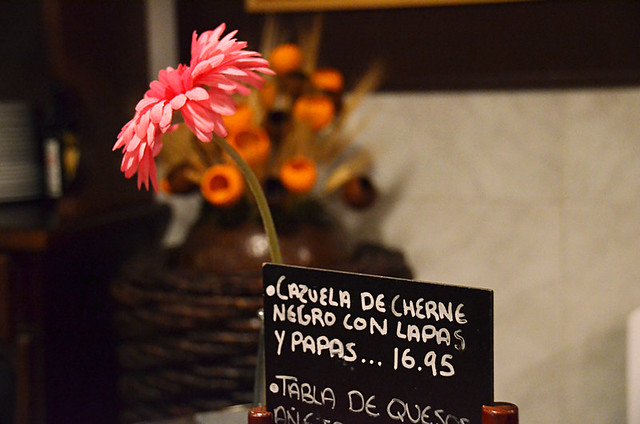 We’d booked a table for 8.30pm and were glad we’d done so as most of the tables in the main dining room were taken and the place buzzed with non-stop chatter, as restaurants populated by locals usually do. Big sincere smiles on the faces of the only two serving staff, a waiter and waitress, made the place feel instantly welcoming.

Black tables split by narrow red tablecloths lent a quasi Japanese feel, softened by a happy flower and a mini blackboard featuring the chef’s suggestions on each table. Prints of agricultural scenes seemed a throwback to the days when it was a conventionally traditional restaurant. Empty of people it might feel quite masculine, but the Canarian chatter filled it with homely warmth. 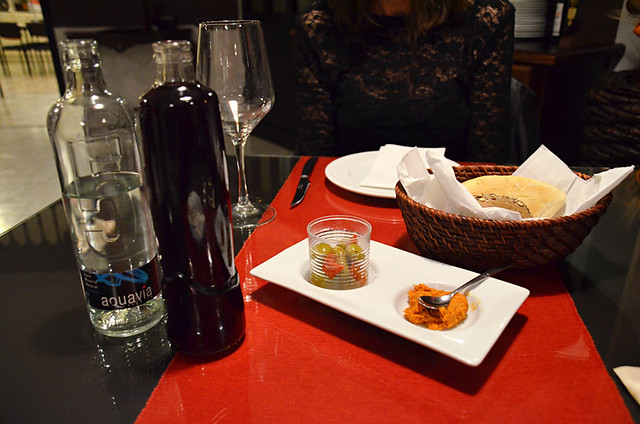 The food at La Bola
La Bola’s gastroguachinche claim is derived from chef Jorge Bosch’s use of very local ingredients, the sort you’d find in guachinches, to create a menu featuring ‘renovated’ traditional dishes. In that respect the menu lists familiar Canarian dishes. What arrives on the table is anything but.

Having seen a photo online, we’d already decided we were having churros de pescado as a starter. We knew La Bola’s take on ‘fish and chips’ was quite sizeable so we paired it with jamón Canario asado (Canarian roast ham) as well as homemade bread with spicy olives and chorizo paste (sobrasada). 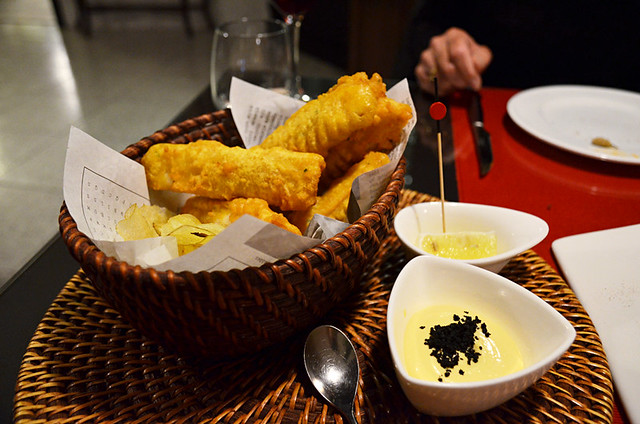 As it turned out, the churros de pescado, with homemade crisps and mango mayonnaise with black olive shavings, were enough for a substantial main portion. The entrantes at La Bola aren’t ‘starters’ sized, they’re more designed for sharing.

For lubrication, in true guachinche fashion, we went for a half litre of local artisanal red wine which was pleasingly quaffable, especially given the bargain basement €4 price tag.

Despite La Bola being packed, the starters arrived pronto – the two waiters working quickly and super efficiently, but also taking time to explain the ingredients in each dish. 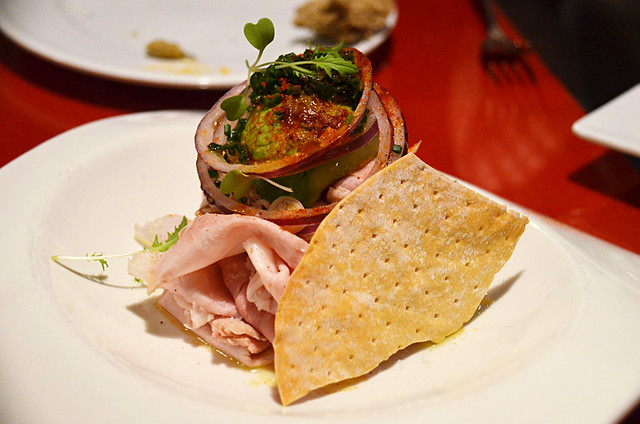 Andy’s main course of black pig cheeks on a bed of sweet potato purée proved too much and one meaty ball was sacrificed in an attempt to leave space for dessert. There was no chance of anything being left uneaten with my chunky pork fillet in a mustard sauce on a roasted potato bed. It was just too good. 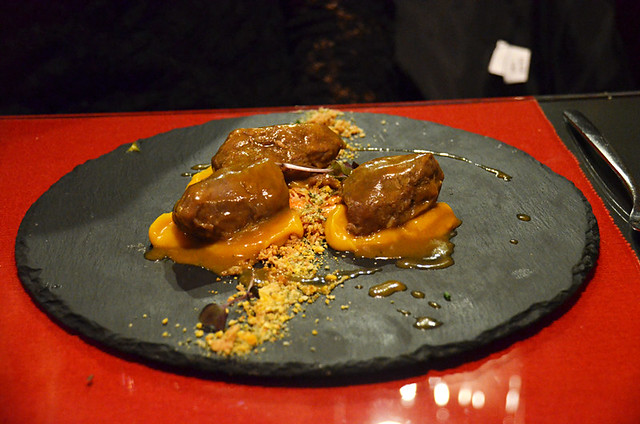 In truth we were too full for dessert, but that didn’t prevent us ordering coulant de chocolate, a crunchy chocolate sponge filled with warm, melted chocolate, and a light as a balloon banoffee pie. Both of which reached the giddy heights of the previous two courses and were worth risking busting our bellies for.

Although courses seemed to come and go relatively quickly, two hours had passed since we’d walked through the door. Time simply slips by easily when you’re enjoying yourself. 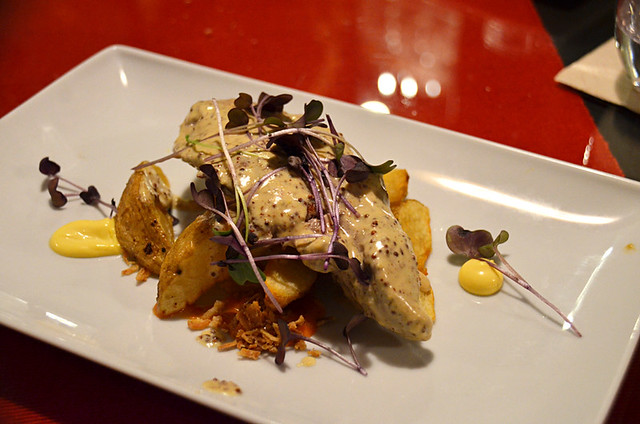 Restaurants like La Bola provide further evidence why Tenerife remains the gastronomic capital of the Canary Islands. It’s perfect for anyone looking for top quality local food off the beaten track.