Just over ten years ago we were totally charmed by a visit to La Tasquita de Nino and also San Miguel de Abona, which has remained one of our favourite towns in the south of Tenerife ever since.

We had a lunch of tasty tapas dishes on the mezzanine area in the cosy little cottage that has in former lives been a tobacco warehouse and a post office. It was probably the first time we realised that eating good traditional cuisine in historic surroundings wasn’t a dining experience exclusive to northern parts. 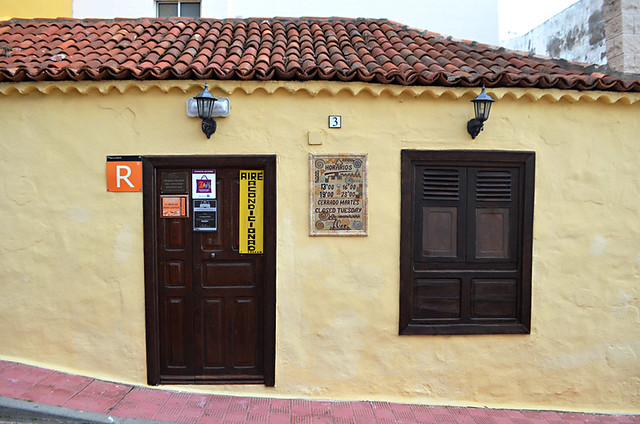 We were wide-eyed and bushy tailed back then, probably over-enjoying every new Tenerife experience. So we were intrigued to see if the intervening years changed our first impressions of La Tasquitade Nino.

The restaurant is tucked into a side street of the old historic road that runs parallel to the new road through San Miguel de Abona. Our base was the Hotel Rural San Miguel; a hop, skip and a jump away – which was handy as it wasn’t the kindest of nights as far as the weather was concerned. 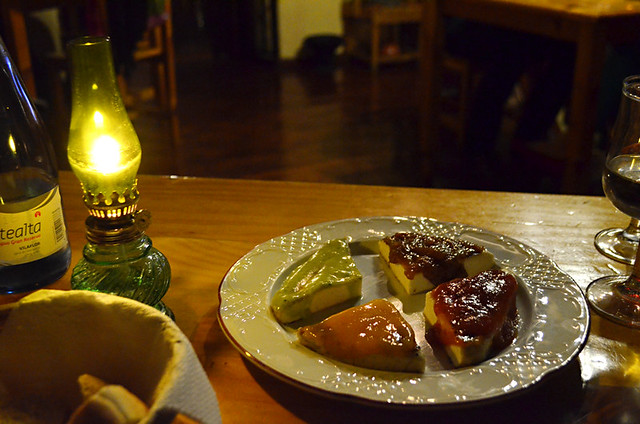 Stepping through the door felt like stepping back a decade, nothing seemed to have changed. It was as rustic as I remembered – lots of polished wood surfaces; farm implements; beamed ceiling; a handful of tables (most filled even though it was a Monday night) and that mezzanine area where there was one table left, tucked into the corner under a beam – perfect.

The Food at La Tasquita de Nino
The menu at La Tasquita de Nino is familiar and yet it isn’t. It’s traditional Canarian cuisine ‘plus’. You get all the favourites – homemade croquettes, morcillas (blood pudding), goat, rabbit, meatballs, fried pork, steak, octopus etc. but there’s a slightly different take with lots of the dishes. So there’s also bananas/dates with panceta, stuffed chayote, fried figs and the meatballs are albóndigas sorpresa (no, I don’t know what the surprise is). There is also a vegetarian selection featuring plenty for non-meateaters. 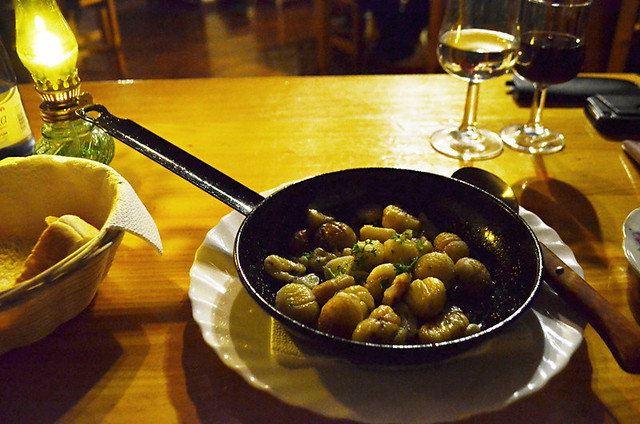 The only problem we had with the menu, as we dipped our bread in a chorizo paste and an almogrote appetiser, was deciding what not to have. In the end we reluctantly made a decision on four dishes which owner Alvaro suggested we share.

Castañas al ajillo (garlic chestnuts) were a taste revelation. Queso fritos (fried cheese) is a common starter, but less common were the ‘mermeladas‘ drizzled on the cheese – tomato, avocado, fig and papaya. Another difficult choice was picking which of those tasted best. 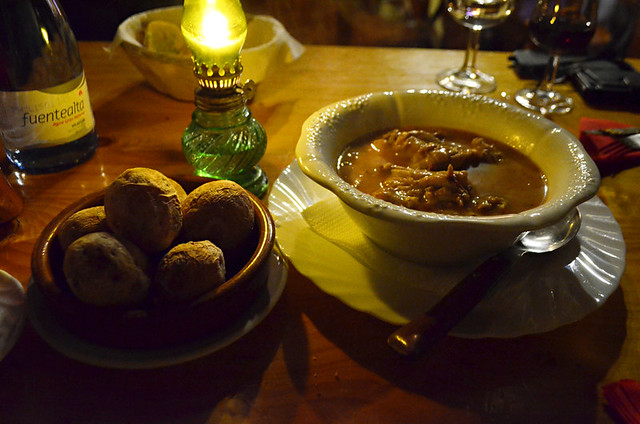 We’re suckers for carne frito (fried pork) and papas arrugadas. Nino’s came with the added flavours of a mojo (sauce). By the time we reached the conejo en salmorejo (rabbit stew) we were full. But we did manage to just about see off some delicias de la casa which were a bit like frangollo balls drizzled with a choocolate sauce… and too heavy when you’re already stuffed.

The food was just as good as we remembered, if anything there was more imagination in the choice of dishes. The restaurant was just as friendly as when we first walked through its doors a decade earlier. As we ate we watched (eavesdropped) Alvaro spend ages with a group of Canario girls, talking them through the menu, describing dishes, suggesting wines. Nothing was too much trouble. 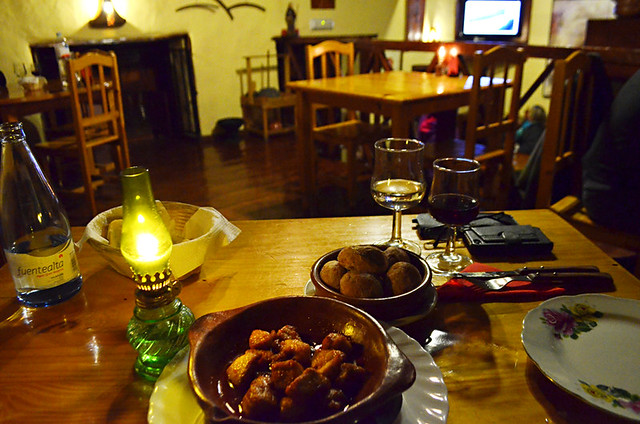 Visitors who don’t posess a good guide to Santa Cruz and who stick to the port area are probably unlikely to accidentally stumble on Plaza de los Patos as it’s tucked away in the streets inland from Plaza España. […]