It’s a perfect summer evening so we decide to walk the three kilometres into Puerto de la Cruz rather than catch a bus.

The sky is clear all along the cumbre to Mount Teide, shrouded by a haze as the sun slips westwards. The low rays illuminate the wide banana palms flanking us and toward the coast we can see paragliders glide gently above the calm, blue Atlantic. 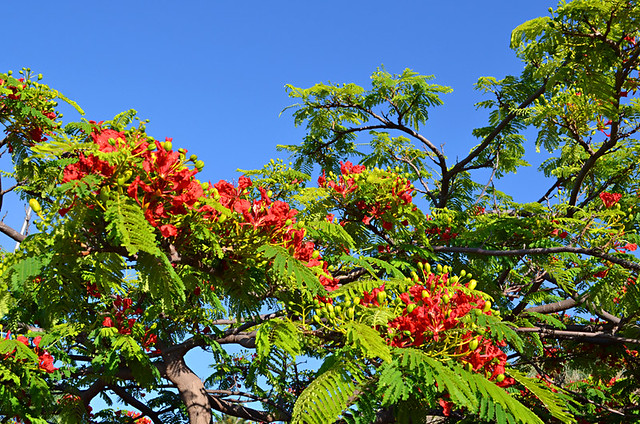 As we reach the main road we stop to admire the perfectly named flamboyant trees in bloom. Opposite them, enshrouding huge palm fronds is a city of gossamer webs, glistening in the sunlight. We don’t really want to meet the architect of that.

Our route takes us past the Botanical Gardens and the old cottage where at weekends the younger end of the population pick up the booty for their small-scale botellons before heading into town. 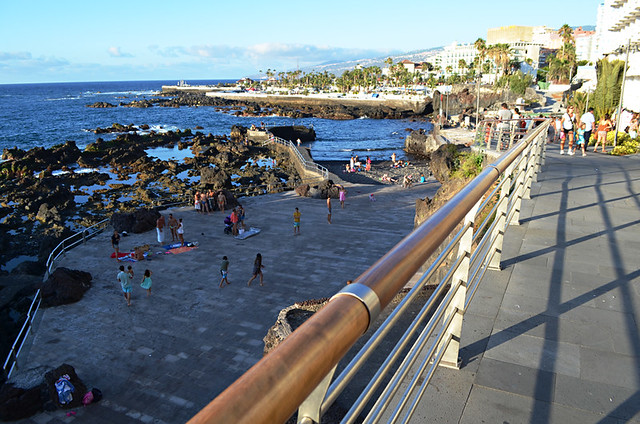 We descend towards the coast past the areas where much of the hotels are located, before reaching the coast at the new San Telmo promenade, which hasn’t progressed a lot in the period since the elections (no surprises there). But it’s still a million times better than what existed before, jazzing up the old, ugly bottleneck. Locals and Spanish holidaymakers line the railings, gazing over the new sun-deck area where a few people bask in the last of the sun’s rays as shadows slowly lengthen to claim the semi-circular promontory. 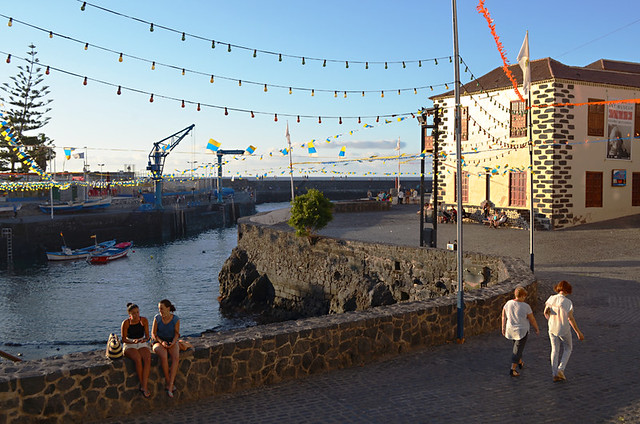 We’ve half an hour before the Heinekan Jazz and Más Festival officially begins, so in reality a bit longer, to grab some eats. It’s always difficult to decide where to have tapas, too much choice, and we wander cobbled backstreets before being attracted to the menu at Casa Mediterranea which, despite the name, has an Argentinian influenced menu. We order a couple of things we haven’t tried before and a couple that are familiar. All are delicious and slightly different, even the alioli has been given an Argentinian makeover. Friendly people and a nice place slightly off the main tourist drag. 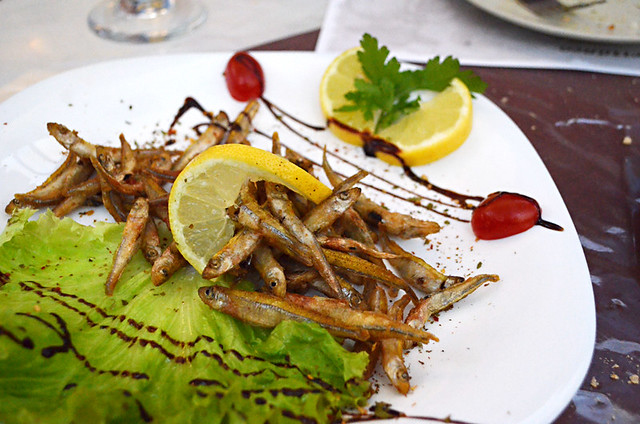 It’s so nice we take longer over dinner than we had planned and the Jazz Festival is in full flow by the time we arrive in Plaza Europa. The Macaronesian Quartet are already performing to an audience of around six hundred people.

Plaza Europa is a perfect setting for small festivals like this. Carved tea wood balconies and the plaza’s fortified sea walls add a suitably atmospheric and historic backdrop, brought up to date by the row of thirty-somethings sitting  on the wall above the stage, enjoying a grandstand view of the free festival. Behind them the sky is a velvet curtain, broken initially only by the sparkling lights that are Jupiter and Venus. 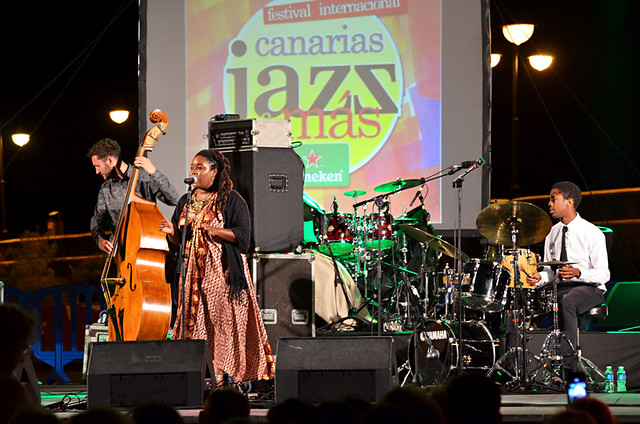 The Macaronesian Quartet are replaced by one of the reasons we didn’t want to miss this year’s festival – Britain’s Zara McFarlane, a rising star of the jazz scene who is backed, we discover, by equally talented musicians.

Zara chats intimately to the audience in English about the story behind a personal song. The only language we’ve heard ,as we grab a couple of beers and wander around to find the best spot, is Spanish. How much is understood of what Zara says is difficult to tell, but the audience responds enthusiastically to her interaction. Looking around it’s made up mostly of Canarian/Spanish thirty and fortysomethings, all looking casually stylish in their summer togs – they look like a jazz audience.

As soon as Zara sings, it’s instantly obvious why she’s one of the hottest jazz talents around at the moment. She has the voice of a jazzed up angel, her soulful songs carry beautifully in the still air, hypnotising the audience… except those who stand at the back chatting incessantly (something we’ve come to accept is just part of the culture here). 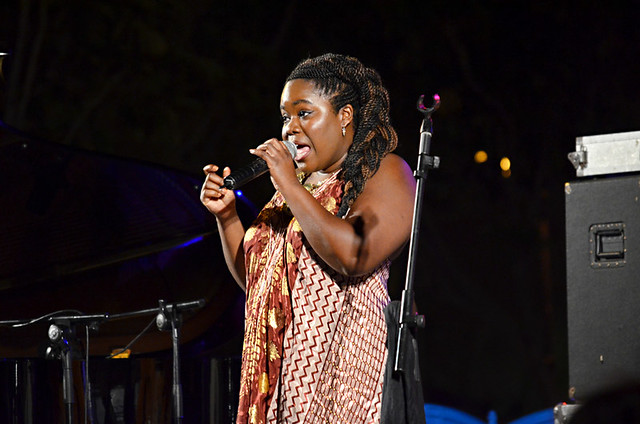 It’s a mesmerising scene – all the ingredients combining to remind, not for the first time, why Puerto de la Cruz is such a special place.

As is so often the case, time slips away far too easily; a factor a Cuban poetess noted about the town many years ago. Zara finishes her set to a standing ovation and we head for home as the old streets start to fill with younger local revellers on their way out.

We take a taxi home, or partly home as a road system doubles the fare thanks to us having to criss-cross municipality borders.

Subsequently we walk back through the bananas on a road which is totally unlit. It does have street lights, they’re just not working at the moment.

It doesn’t matter, it’s a crystal clear night. So clear we can see Mount Teide and the cumbre even though it’s after midnight. As we look up the hill toward the island’s spine we hear Latino music from another fiesta in La Orotava. Then the sky lights up with explosions of colour as the town up the hill throws a small firework display (commonplace around the Orotava Valley at this time of year).

It’s a fitting end to a special Saturday night. Special, but not uncommon.