We regularly say to enjoy a fully rounded flavour of Tenerife’s towns/resorts it’s important to experience them after darkness falls. We also urge people to research thoroughly before deciding where to stay on Tenerife as it’s all too easy to end up somewhere which doesn’t suit personal preferences. 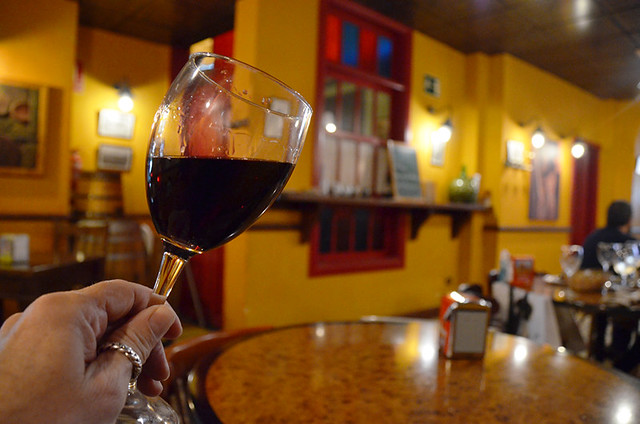 These views were reinforced when we travelled around the island, staying in five different locations – Santa Cruz, Puerto Santiago, Los Gigantes, Puerto de la Cruz and La Laguna. It was an illuminating circumnavigation of Tenerife revealing, once again, an island with many faces.

Sunday and Monday nights in Santa Cruz
As it was Sunday night most of the restaurants we wanted to try were closed, so we didn’t stray far from our base, the Hotel Contemporaneo, located beside one of our favourite parks anywhere, the exotic and arty Parque García Sanabria. 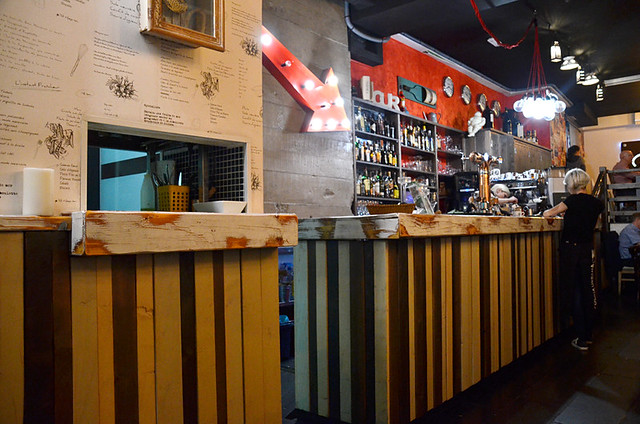 The difference between resorts and traditional towns on Tenerife is one moves to the beat of those who visit, so there’s often little difference from night to night, whereas the other sashays along to the rhythm of those who live there, meaning weekdays can be quiet but weekends come with that TGIF buzz. Santa Cruz on a pre-carnival Sunday night was quiet, but stylish Cocina Urbana beside the hotel offered a friendly sanctuary, its patrons including a mix of guests from nearby hotels and locals. It had that cool urban ambiance of a city bar/restaurant and was a pleasant spot to while away a Sunday night with a bottle of Balcón Canario whilst munching on a Canarian burger (chunky beef topped with cheese from La Palma and Canarian mojos). 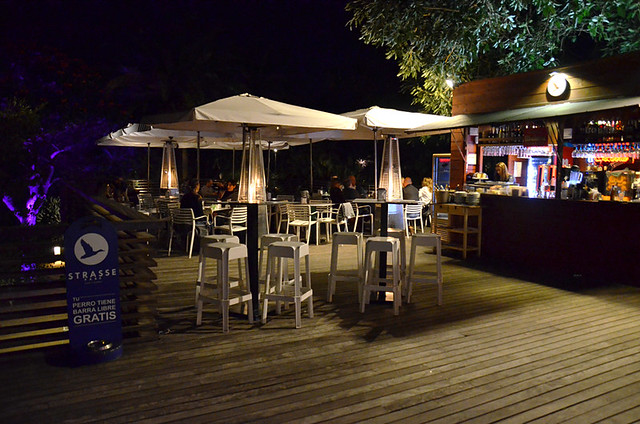 Monday night is quiet in Canarian towns and cities. But the evening started off lively enough, meeting a friend we hadn’t seen for far too long for early evening drinks at Strasse Park. We sat above the lush foliage of the park, sipping wine whilst bright green parrots streaked noisily past our heads – it’s a sophisticated, subtropical spot where it’s far too easy to get comfortable and sink too many copas de vino. Our nocturnal plans were only to grab some raciones (small dishes) in Mixtura (Calle Patricia Estrevez 2), a restaurant owned by a friend of our friend. We were the only diners and the city streets outside were devoid of Santa Cruceros. How many other people there are around doesn’t really matter when you’re in good company. 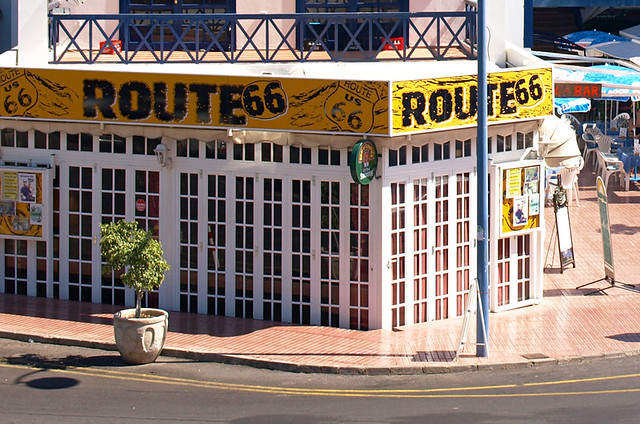 Tuesday and Wednesday in Puerto Santiago
Anytime we stay in Puerto Santiago we head to Route 66, a great holiday bar with quality music, good enough to draw even those staying all inclusive in nearby hotels. After Santa Cruz it was initially a bit of a culture shock. Instead of being surrounded by Spanish speakers, English was the dominant language, the clientele consisting mostly of holidaymakers, unsurprisingly as it’s a resort bar. Despite suffering from the gripe (flu) which seems to be affecting Europe, Old Dogs New Tricks did their usual professional set, reminding us why it’s one of our favourite resort bars on Tenerife. We returned on Wednesday night to hear No Limits perform an even better set, by which time we were fully immersed in holiday resort mode. Two excellent nights were marred only by the bar staff adding an extra round to our bill. To be fair, there was no quibbling when the error was pointed out. 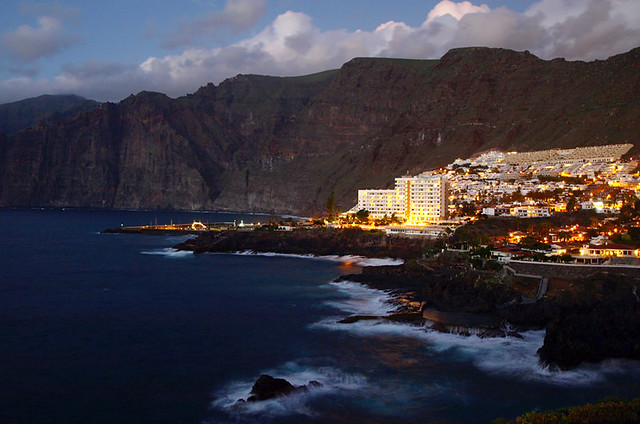 Thursday and Friday in Los Gigantes
We booked an apartment in Los Gigantes in order to dine at Michelin star restaurant El Rincón de Juan Carlos. Los Gigantes is located in a stunning position, but we often have odd little experiences there. This time was no different. First a barmaid tried to pass off a carton of orange juice as being the same as freshly squeezed OJ. Then she turned away a family, bizarrely telling them people under 18 weren’t allowed in places which sold alcohol (this was at midday). A waiter become flustered when we asked specifically what the ‘Tenerife wine’ listed on the menu actually was. Added to this the people in the apartment next door blasted out UK TV programmes from dawn till dusk.  Oddest of all was an exchange in the Highland Paddy bar where we headed for a dram to toast Burns Night.
“I don’t really know much about Burns Night,” remarked an amiable young English barman when we told him what we were after. “It’s a Scottish thing isn’t it?”
When we asked what whisky they stocked his answer was priceless. “Bushmill’s, Jameson’s, Jack Daniel’s…”
Is it too much to ask to expect a bar with the name Highland Paddy to be able to tell the difference between Scottish, Irish and American whisky? 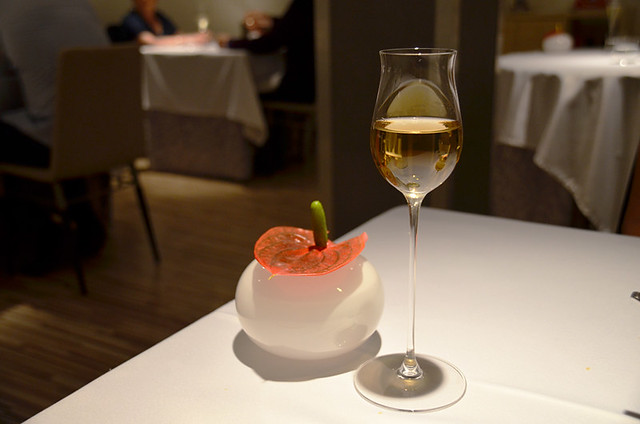 Friday night was dedicated completely to El Rincón de Juan Carlos; three and a half hours of glorious gastronomic indulgence.

Saturday to Monday in Puerto de la Cruz
Succumbing to the flu doing the rounds, we weren’t as lively as we’d hoped to be to meet up with another friend to tour our favourite weekend bars in Puerto de la Cruz. We confined ourselves mainly to La Fragata on the harbour. Even if we didn’t know the town well, one Saturday night in January would be enough to illustrate why many visitors don’t fully experience Puerto’s bar scene at its most vibrant. The town experiences a personality change after the hours of midnight at the weekend, evident in La Fragata itself. Before 11pm this friendly bar is filled with mainly a mix of expats and British visitors. By midnight most have departed, replaced by Canarios. A conversation with a British holidaymaker at the bar showed why the best of the nightlife remains hidden to so many. He complained a pub quiz at one of the town’s few British bars started too late as it didn’t get going until 10.30pm.
“I’m normally tucked up in my bed by that time,” he told us.
If 10.30pm is too late, he was never going to witness the Puerto after dark scene we’re familiar with. 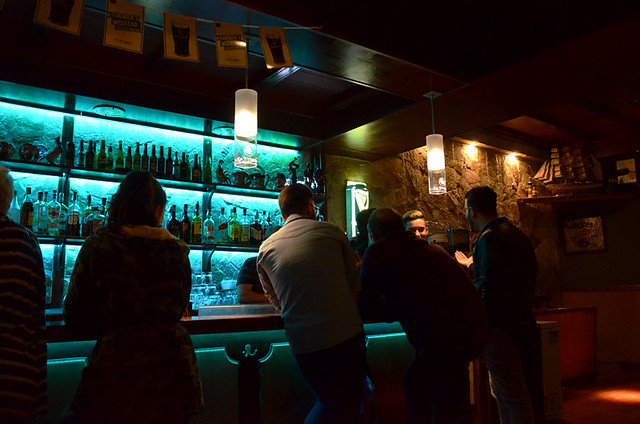 Tellingly, by the time we left the bar the town’s streets were completely empty of visitors. But there were plenty of young Canarios at the start of their night out, laughing and dancing their way along the streets of the old town.

Tuesday and Wednesday in La Laguna
Bad weather from the north of Europe brought rain, snow, wind, hail to the Canary Islands. Not unusual for end of January weather. When these sort of conditions hit, La Laguna at 600m above sea level generally takes the brunt. Subsequently the weather was dreich as we say in Scotland; cool and very wet. However, I’d rather be in a city when the weather is bad than in a resort where the sun is the main draw. Apart from museums and the eclectic mix of colonial buildings, La Laguna also has loads of atmospheric tascas in which to shelter when the rains come, and they did. We drank wine in a tasca which was the birthplace of Spanish artist Óscar Domínguez, and watched rivers cascade down the street from a bar filled with cheery Laguneros sipping from carafes of vino del pais whilst listening to Canarian folk songs. There’s an infectious local camaraderie in these sort of bars in traditional towns, no matter what the weather is doing. 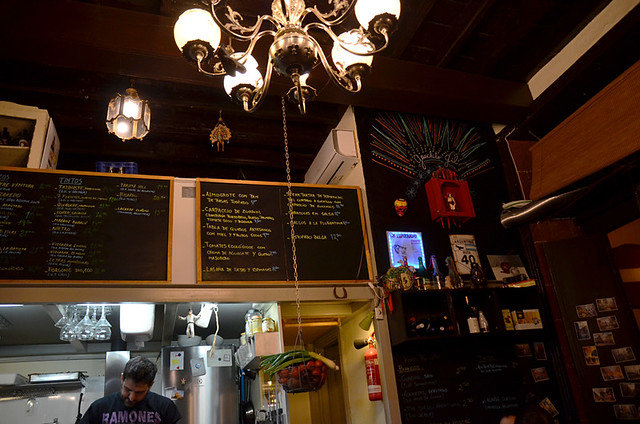 Heavy rain on Wednesday night kept the streets even quieter than they normally would be midweek. Nevertheless, we were lucky to squeeze into tiny El Jinete Sin Cabeza (Headless Horseman). Surprisingly, two of the handful of other tables were also taken by Brits, seemingly unperturbed by the weather and clearly enjoying the distinctly local scene and food. The blackboard menu was only in Spanish, prompting two men at one table, who couldn’t tell starters from main courses, to ask for help from the Brits at the other. The staff were friendly, the tasca relaxed and buzzing with lively chatter. It was cosily comfortable. 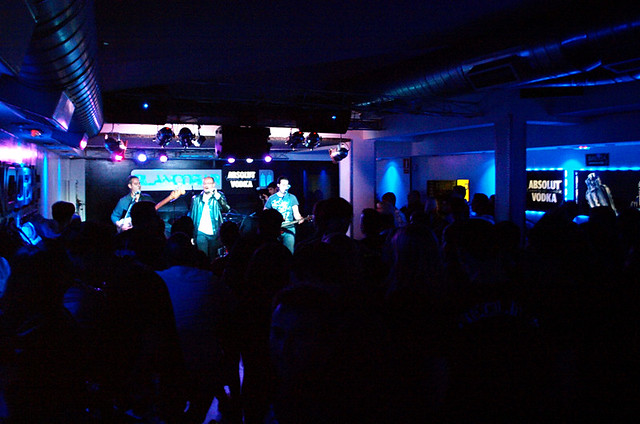 It was around this point the contrasts between varying Tenerife locations were truly rammed home. The diners in El Jinete Sin Cabeza looked and acted like visitors on a break in a historic European city. A week earlier, in Route 66, the scene was of holidaymakers dressed for warm winter weather in a bar designed purely for their pleasure. The yin and yang of Tenerife. Both enjoyable places to spend the night, but poles apart from each other. In both bars it seemed the patrons had chosen a Tenerife base suited to them.

They were unlike the person who’d ended up in a La Laguna hotel purely because they liked the look of a rooftop pool and who, revealing as much about themselves as La Laguna, commented – “It’s in the north of Tenerife where there isn’t much to see nor is it near a beach.”