One day when seven locals, and a few of their mates, reminded us why the Orotava Valley is such a wonderful place to live.

It was triggered by a commission for a travel article about guachinches. We were already backed up with work. In fact Andy was working on another article about the live music scene in Tenerife and Gran Canaria when the email came through. It was partly prompted by the fact that a photographer who works a lot with airline magazines was already on Tenerife for the live music shoot. The editor of the magazine thought it was a good opportunity to kill two birds with one stone.

Had it been for any of the run of the mill content which often requires a strong tourist resort connection, it might have been turned down as the deadline was seriously tight. But the guachinche idea had been pitched a long time ago and we didn’t want someone else who didn’t really know guachinches writing about them and getting it wrong. So the gauntlet was taken up. 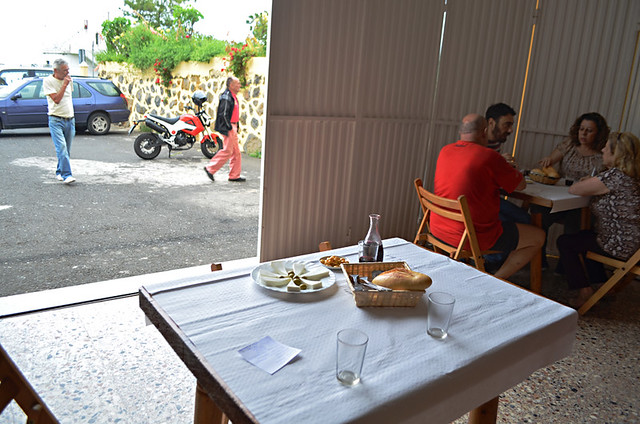 These types of articles involve quite a bit of planning, especially when there’s a specialist travel portrait photographer involved. Normally people are set up way in advance so they can be interviewed in a place that is photographer friendly.

But the very nature of truly authentic guachinches mean that there is no ‘phoning ahead’ to arrange things. Guachinches come and go and you never know if one’s going to be open or not.

We had one day in which to gather enough material and photographs for six mini interviews with local people who were involved with traditional food and guachinches.

Andy and I hatched a plan, met the photographer Tim and off we went, fingers crossed that enough people in the right place at the right time would agree to talk to us and be photographed. 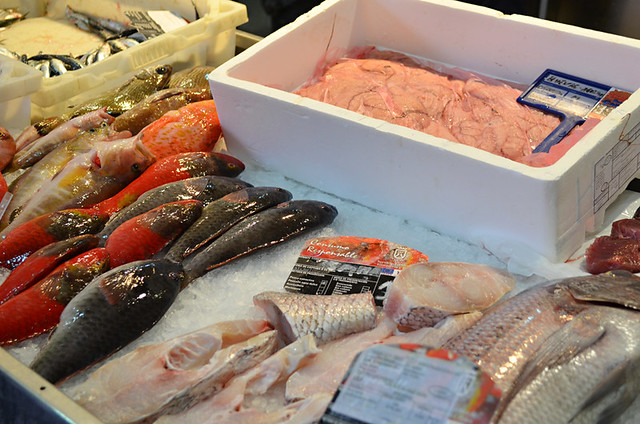 The Fish Stall
First stop was the fish stall in Puerto de la Cruz. There was a wonderful selection of freshly caught fish (perfect for photos) but the fishmonger, gutting fish as he spoke, didn’t want to be photographed. At first he was on the grumpy side, but he soon thawed, telling us about his favourite fish etc. But without the photos of him, it was useless. It was a bust and not a good start.

The Market
There’s always a food market on the upper floor of the Mercado Municipal with lots of photo friendly fruit, veg and fish. The first stall boosted our spirits. The owner, Nora, was only too happy to pose and chat. As she posed with papas negras, owners from other stalls came out and teased here, telling her she’d be famous. She was fantastic, full of information. The only problem was she didn’t stop talking for a second. “I’m not sure I’ll be able to use any,” Tim told us as we left Nora to move on. “I don’t think I’ve got one shot where she’s not speaking.”

A couple of stalls away was a young fishmonger who also was happy to be interviewed. Again more interesting information, good shots of fish and a great subject as he had a hipster look about him.

We were up and running. 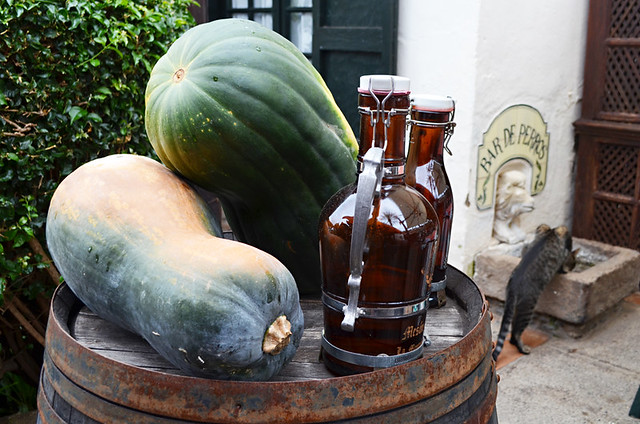 The Monastery
We know the people at El Monasterio are always relaxed about anyone turning up and taking photos and, as there’s been a connection with food and wine on that spot for centuries, it seemed perfect. By the time we’d wandered round talking to the jefe (manager) of one of the restaurants it was after midday. We needed a lot more material.

The Mill
Next stop was a gofio mill in La Orotava. Again, another dream of a subject in miller Lolo who was worth a blog post to himself. 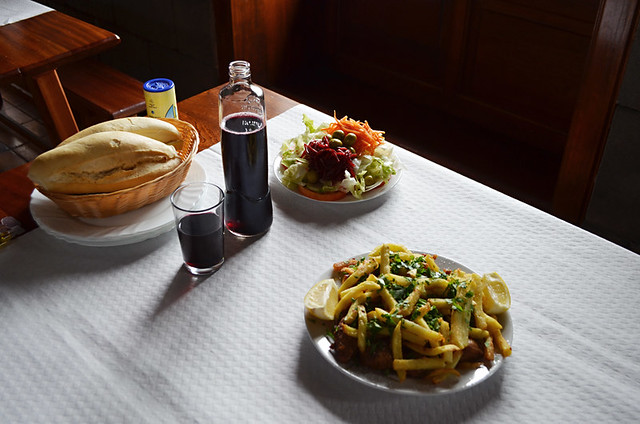 Guachinche Number 1
As it was for a travel mag we’d deliberately tried to find a guachinche that was a bit more like a ‘proper’ restaurant. The more rough and ready guachinches ooze character when you’re in one, but they’re not exactly photogenic. Casa San Antonio fitted the bill perfectly. Waiter Francisco needed a bit of coaxing before he agreed to be photographed and then found it difficult to compose himself, collapsing in infectious hysterics as Tim positioned him for the best light. The people running guachinches aren’t used to being the subject of travel articles and it was clear we were causing interested amusement wherever we went. It was good fun and the food was excellent and dirt cheap.

Guachinche Number 2
This time we wanted a guachinche that was set in a garage, so we tried El Ratino… and got lucky. A few days later they would have been closed, having reached the end of their ‘allowed’ period of opening.
El Ratino was great, full of colourful local characters, each of whom insisted on chatting. Not only did they agree to be photographed, they demanded it. We were given free reign to wander, talk and take photos. We could always tell where Tim was at any one time as there were hoots of laughter coming from that direction – a sure sign he was in the process of ‘positioning’ someone to be photographed.
The people were fantastically friendly. It made us feel proud to be able to show Tim this extremely amiable face of Tenerife. It’s not one a lot of visitors see, yet it’s one that lies at the heart of the island. 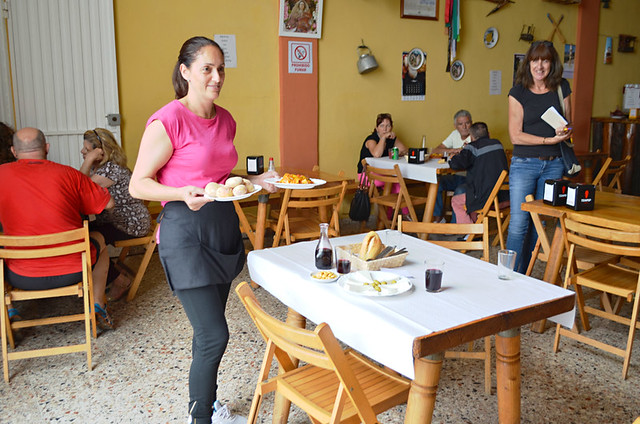 We were congratulating ourselves for pulling a diverse mix of people and local foods out of the bag when Tim threw in a curve ball.

“I’d really like some photos of people working in the fields.”

“What?” There was a clunk as our jaws hit the floor. “At four on a July afternoon? It’s not going to happen.”

There followed a bit of serious chin stroking.

One of the guachinches on our short list was surrounded by vines. It was a long shot, but we figured at worst we might be able to ask one of the owners to ‘play act’ pruning vines.

The Singer
After descending on a steep, narrow road to reach the guachinche, we parked in a piece of flat ground.
Unbelievably, opposite the rough car park was an allotment where two women were collecting vegetables. Andy rushed across before they could toddle off and asked if we could photograph them at work. They were proud to show off their eco-allotment and to chat away. It was ideal. More than ideal as it happened.
As Tim took photos of one of the women cutting Swiss chard, her friend said: “She’s a famous singer you know.” 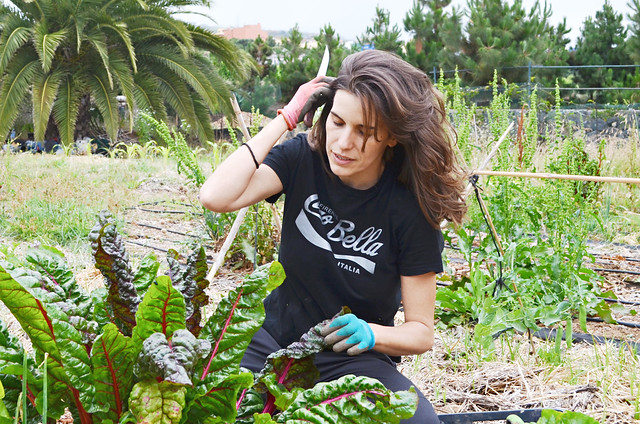 The allotment owner turned out to be Marta Solis, one of Tenerife’s top female singer songwriters and winner of the Benidorm Song Festival in 2002.
If you want someone working in the fields for a travel mag article, you’d be hard pressed to find a more interesting subject.

Talk about luck. It was an unexpected and perfect end to quite a day.

Marta was the icing on an incredible day with the people of the Orotava Valley. Despite us bringing disruption and chaos to their working lives, they had all treated us with exceptional friendliness and hospitality.

This unconditional friendliness is one of the reasons Tenerife is an extra special place.