“Aargh,” the shout was on the high-pitched side. “LOOK OUT!”

“What the hell is it?” My friend stopped mid-step in our living room as a scaly creature headed in his direction so fast it was a blur.

“It’s just a lizard, I was worried you might step on it.”

“What about the girly scream?”

“That was cause it fell on my head when I opened the door,” I replied sheepishly. “It always gives me a bit of a turn when they do that.”

One of the things that nobody warned us about when we moved to Tenerife was about learning to live with lizards. 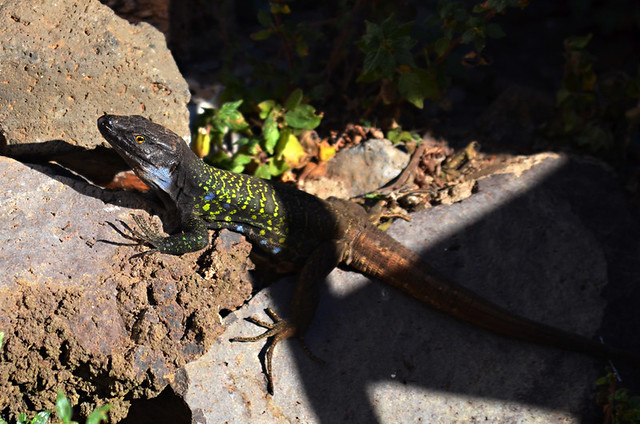 We have at least four types who inhabit the same space as us. The Tenerife lagarto (lovely markings), copper-coloured skinks with a metallic sheen, a small striped lizard (no idea what that’s called) and the nocturnal geckos which we positively encourage to come into the house as they are mosquito munchers, not that we get too many of those.

Most confine themselves to the garden, living in the woodpile and using the compost as a sort of fast food joint so that nothing actually gets to compost down (eggs are extremely popular in the lizard world).

Some live quietly under the terracotta roof tiles. Quietly until there’s a fight and then it sounds like the migration route for a herd of wildebeest just happens to go across our house. The frantic scuttling noise freaked us until we got used to it. 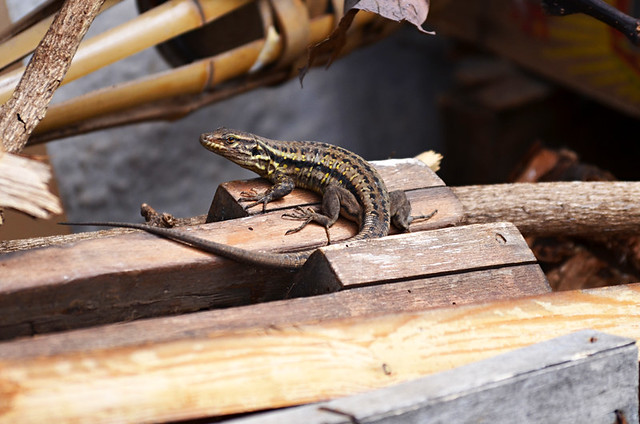 The biggest problem about living with lizards lies in trying not to kill them accidentally. They are subconsciously suicidal.

In the first couple of years we murdered far too many. Door and window frames, popular places for them to hang out, soon became ‘decorated’ with flattened bodies, like a reptilian version of leaf collecting. Skinks were regularly mowed in half, skylights were guilty of doing a magician’s trick on lazing lizards. In one case we had to live with the top half of a big lizard peering in at us when we were in the bathroom until I eventually took to the roof to scrape it off. Others suffocated after being trapped in roller blinds.
In some cases there was nothing we could do to prevent it – a charred head falling out of the boiler, barbecued to a crisp after the hot water tap was turned on. They’re just not smart at choosing where to hang out. 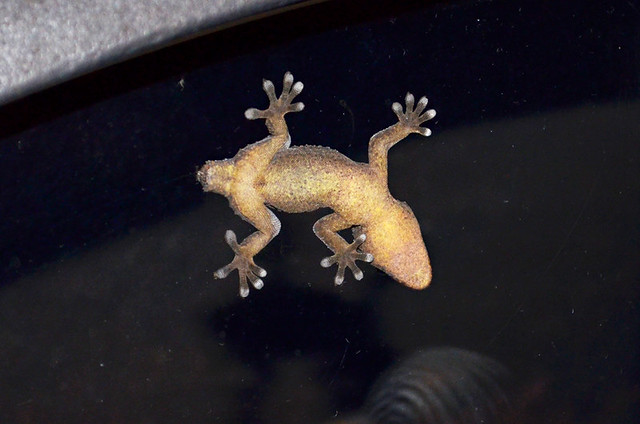 In recent years we’ve become more careful; checking frames before closing windows and doors, not stepping into the bathroom or kitchen without scanning the floor (one lives under the fridge, another lives under a chest in the bathroom) and so on. We’ve come to live in something close to harmony with our reptilian house and garden guests. Now the garden lizards even let us know if we’ve not been putting enough food for them on the compost.

Living with the local wildlife can get ridiculous. Our sun umbrella was out of action during much of the summer as not only did we have a gecko inside it, we had a bat as well so it couldn’t be put up. At the same time, a frog set up home in the umbrella’s base which also posed a bit of a problem as we didn’t want to accidentally skewer it. 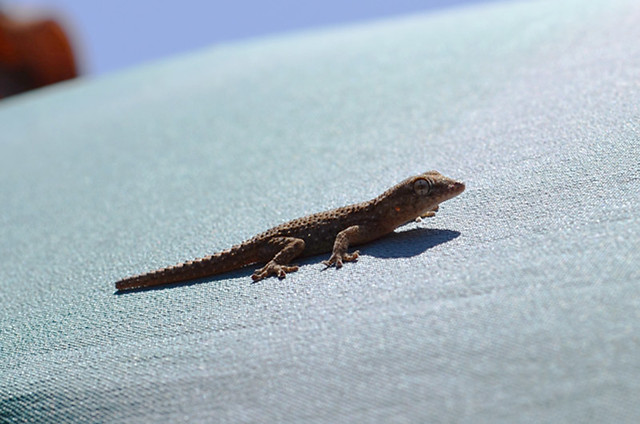 Our latest ‘living arrangement’ with a lizard involves a gecko which likes to sit on the top of the roller blinds in the living room. We discovered him on spotting an odd-shaped bump after rolling the blind up. He was none the worse for wear, in fact I think he enjoyed it a bit as it was probably like a roller-coaster ride.

He’s a smart wee fellow. Initially we had to tap the blind behind him to make him move so we could roll the blind up without trapping him in it… again. Now when we get close he shifts automatically, returning after the blind has been opened.

And so it goes on. The reptilian army has just become part of domestic life here.

In truth we like living with lizards. They do their thing, we do ours. It’s got to the point we even worry they’ll be okay when we go off on a trip.