Top ten beaches on Tenerife? It’s a subjective and occasionally emotive subject. Everyone has their favourites. In many discussions I’ve read, these tend to be the ones people are most familiar with. People quote places as being the ‘best beach’ without having set foot on many of the island’s other beaches.

We’ve visited beaches all around Tenerife’s coastline, from the ones everyone knows about to coves that require three hours of trekking to get there. But we’re as subjective as the next person. We prefer beaches with a distinct personality that aren’t backed by hotels and which don’t have row upon row of sunbeds lined across them.

Which is why this is called ‘Our’ Top Ten Favourite Beaches on Tenerife. 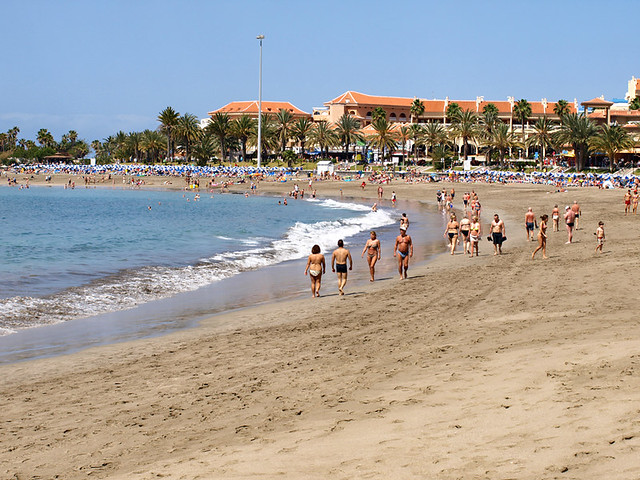 Although the wide golden sands of Playa las Vistas just doesn’t do it for us, we can see how attractive it is as a holiday beach. There’s loads of space, it’s pale golden and therefore looks good, and there are lots of restaurants and bars nearby. But it’s just too manicured; it doesn’t feel like a real beach… which is why it comes in at number 10 on our list. 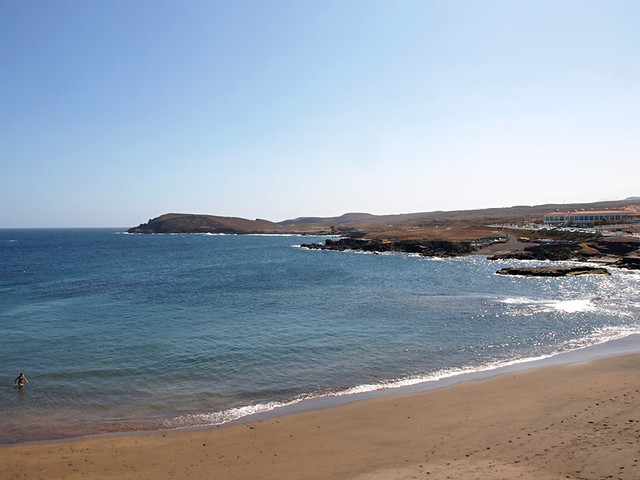 One of the few places where you’ll find a naturally pale golden (ish) sand beach on Tenerife. Abades charms because it has a remote cove feel to it and is blissfully quiet outside of summer months. It is a complete contrast to the immaculately designed resort beaches. And it has a mysterious abandoned town behind it that adds interest. The development beside it is bland and not particularly aesthetically pleasing which knocks the beach down to ninth position. 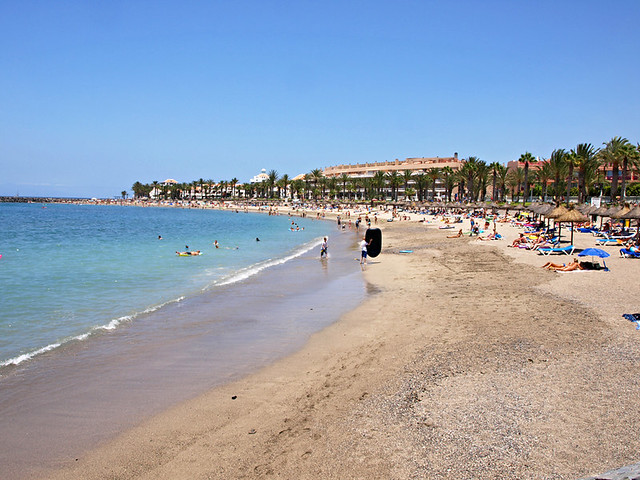 In some ways this is our favourite beach of the main southern resorts. Playa el Camisón lies tucked in between Los Cristianos and Costa Adeje. Because it’s on a headland it doesn’t feel crowded by hotels and benefits from having the five star retro good looks of the Sir Anthony Hotel behind it. It feels smaller, more intimate and more natural than other beaches in the area. The downside is that it gets very, very busy. 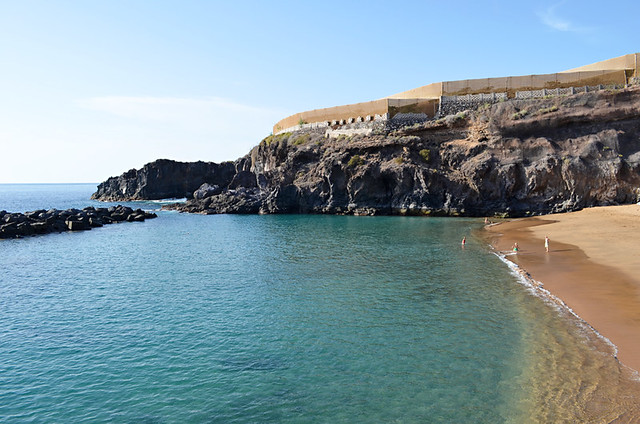 Tenerife’s exclusive beach as it lies hidden from view in the cliffs below one of Tenerife’s top hotels, the Abama Golf & Spa Resort. Golden sand, its sheltered setting and a coastal path to explore make it feel very different from other beaches in the area. There’s no denying it looks the part. However, even though it’s a public beach there’s no escaping the fact that it feels as though it belongs to the Abama. If the lovely new beach at Alcalá lasts it might replace this one as one of our favourites. 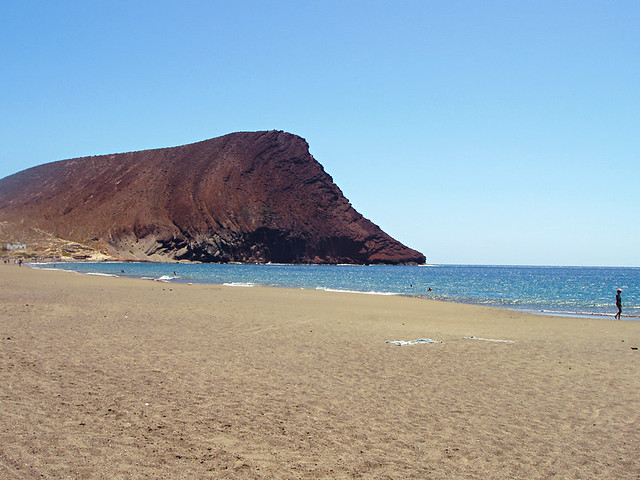 Acres of pale golden sand, a red mountain, loads of space and ideal if you want to go for the all over tan, Playa La Tejita ticks a lot of the boxes that puts it up there as one of the best looking beaches on Tenerife. But this is the east coast, there’s wind… a lot of wind. 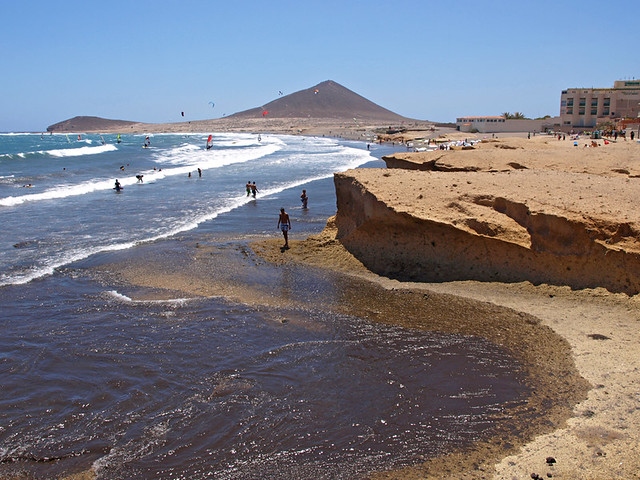 There is more than one beach stretching from El Médano to Montaña Roja, creating coves in the pumice formations and a long stretch of pale golden sand. El Médano beach has a wild and carefree feel to it and feels like a local beach. Windsurfers and kite-boarders add splashes of colour to the scene as well as giving sunbathers something to watch. Bars and restaurants lining the beach have a pleasantly surf scene feel. But, like its neighbour Tejita, it’s too windy to make it a great beach. 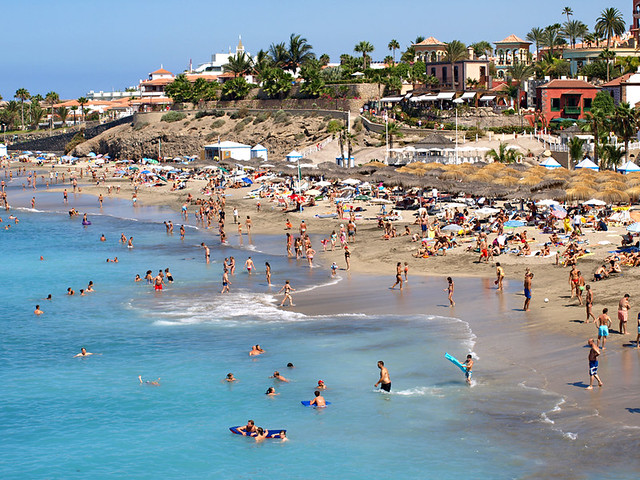 This is the perfect beach for the area often referred to as the ‘upmarket’ part of Costa Adeje thanks to its profusion of luxury hotels. The beach is segregated from the rest of the southern resorts by a rocky outcrop with a mock castle, adding to that air of exclusivity. The sea is turquoise, the beach is white and straw umbrellas, striped beach huts and a colonial restaurant on stilts lend it a personality that mixes south of France with the Caribbean. It’s a beautiful looking beach. The downside? The sand is really odd. 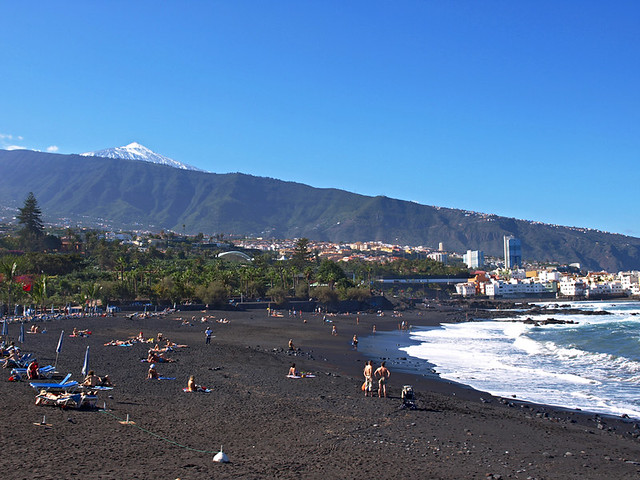 It’s been developed and landscaped with gardens by César Manrique, hence the name ‘Garden Beach’, but this black sand beach at the western end of Puerto de la Cruz gets our vote because it’s a beach that bridges the gap between tourists and locals. It’s a resort beach but parts feel quite wild. It’s also a community beach and huge fiestas are held on it. Plus it has Mount Teide towering above it. When the mountain is snow clad it is a feature alone that pushes the beach into such a lofty position. The downside is that the sea is often rough (also an upside for strong swimmers). 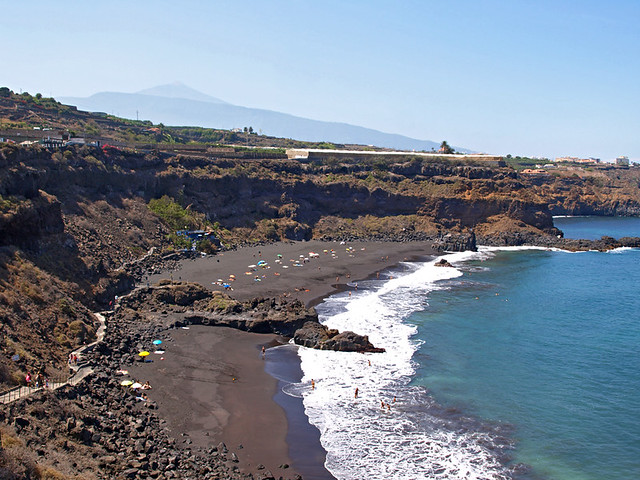 In reality, Playa Bollullo is probably our favourite ‘all round’ beach on Tenerife. There are no hotels backing it, only a beach café, and facilities are primitive. It takes effort to get there and the waves are constantly frisky. All of which are plus points in our book. This is a beautiful looking local beach tucked into the cliffs beyond the banana plantations. This beach epitomises what we think of as the ‘real’ Tenerife. It’s also got two neighbouring beaches that are equally beautiful. 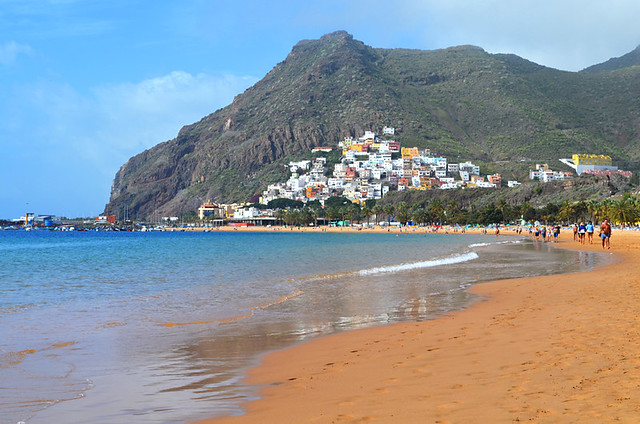 It’s man made and often windy so why does Playa de las Teresitas get the number one spot? Because it is the most beautiful beach on Tenerife. It’s the sort of beach that when people see a photograph of it they want to visit. When travel articles in magazines and newspapers print a feature about Tenerife, nine time out of ten times you can bet it will include a photo of Teresitas… even if the article doesn’t mention the place. Golden Saharan sand, a calm turquoise lagoon, palm trees, kiosks selling traditional grub at the rear, loads of space, a stylish Santa Cruz vibe, pretty fishing village next door and an Anaga Mountain backdrop. No other beach on Tenerife boasts this mix of juicy ingredients.