Overall
The Hotel Colon Guanahani was a pleasant surprise, a small hotel in the centre of one of Tenerife’s main southern resorts that looks elegant and has a refined, but not stuffy, personality to match. As it’s also an adults only hotel, it’s an ideal choice for anyone wanting a child free holiday. 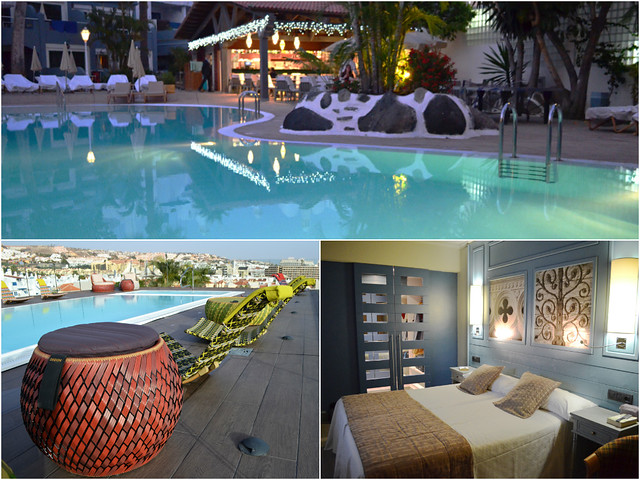 Where is the Hotel Colon Guanahani?
The 4 star Colon Guanahani is located about 150m from Playa Fañabe. It’s in a good position for being able to access the Del Duque part of Costa Adeje or to take advantage of the boat trips from Puerto Colon. There are loads of restaurants and bars nearby, on the promenade and in the streets around the seafront. Basically the Guanahani is in a great position for accessing quite different areas of Costa Adeje ranging from upmarket to budget friendly (aka cheap and cheerful).

What is the Hotel Colon Guanahani like?
Entering the Guanahani feels a bit like escaping into an elegantly designed oasis. The décor is tasteful, with a calming colour scheme. The blurb classes it as colonial in style which it is, but there’s also nice blend of old school grandiosity – pillars and sweeping staircases – and modern chic (see the rooftop pool especially). I liked it a lot, the design is attractively easy on the eye.

Because it’s a small hotel, the interior courtyard area isn’t huge. But it’s been laid out cleverly to give the feel of being more spacious. For example, the bar and restaurant terrace sits on a level above the two main swimming pools (heated to 29C) like a mezzanine area, which means neither levels feel crowded. It’s a design which looks good as well, adding an element of sophistication. 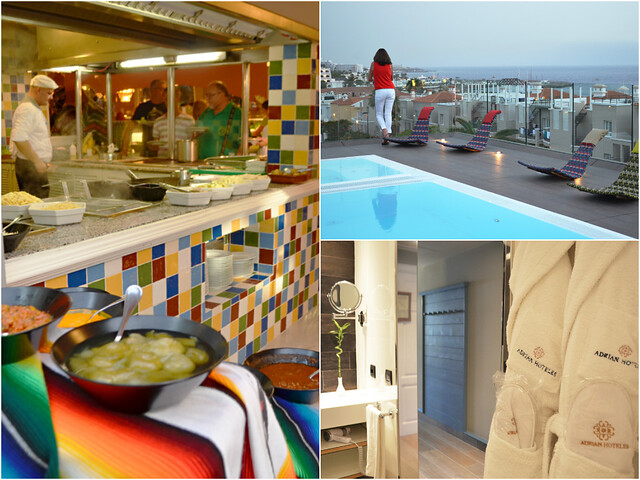 My favourite feature is the funky new rooftop pool with views to the sea and mountains. The elevator leading to it is ultra contemporary in design with a chic urban style that lends a boutique aspect to the hotel which is further complimented by the rooftop pool area itself. The seating up there is great fun, probably not in the slightest bit practical but the imaginative seats and cushions could grace the pages of a style mag.

Within the courtyard area is a well equipped gym (nope, I didn’t try it) and a spa/wellness centre with a discreet open air jacuzzi and a good range of treatments including chocolate therapy and pinda massage (that’s a new one on me, it involves heated bags apparently).

I also rather liked the layout of the bar. It’s typically hotel bar big, but it’s separated from the main foyer which gives it more of a ‘proper’ bar feel than you find in some hotels. Plus the terrace is small enough so that it doesn’t feel too detached from the live entertainment programme. The outdoor terrace is a nice place to sit, drink and have a chat whether there’s live music or not. 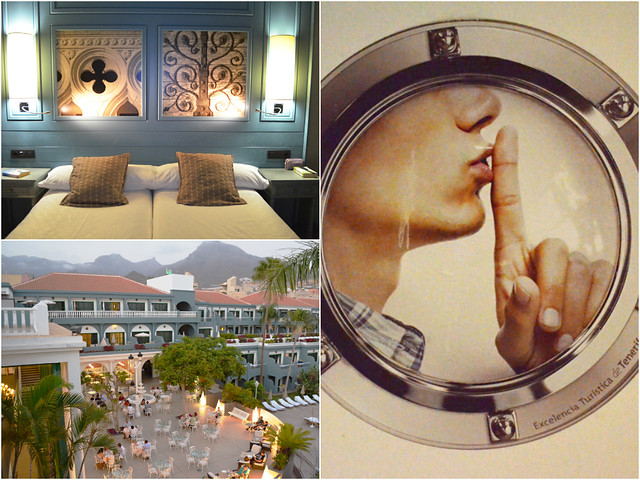 What are the Bedrooms Like?
There are 154 bedrooms with a choice of double, superior double, suite and superior suite.
The décor in the bedrooms is right up my street – classically colonial with plenty of modern touches. The use of turquoise wooden panelling and artistic prints show what can be done with a standard hotel room layout when you apply some imagination.
Our double room was big enough for us to wander around in without bumping into each other. The walk in wardrobe was huge, plenty of space for clothes and luggage storage. There were a couple of comfy chairs, useful for when it cooled on the balcony later at night. There was also a desk area, always appreciated by us as we usually have a wee bit of work to catch up with. The bathroom was sleek and modern with slate grey and white tiles, a powerful shower and bathrobes, slippers and toiletries. Our balcony overlooked the courtyard and grounds and was nicely private (I don’t like balconies where you sit in full view of your neighbour). There was a satellite TV, hairdryer, mini bar, safe and fast, free wifi – all the things we needed to make our stay comfy.

How Good is the Food?
Most meals are served in the main restaurant although there is also a poolside restaurant for lunches and snacks. It’s a buffet affair with plenty of seating in three areas (two interior and one exterior, the most sought after). 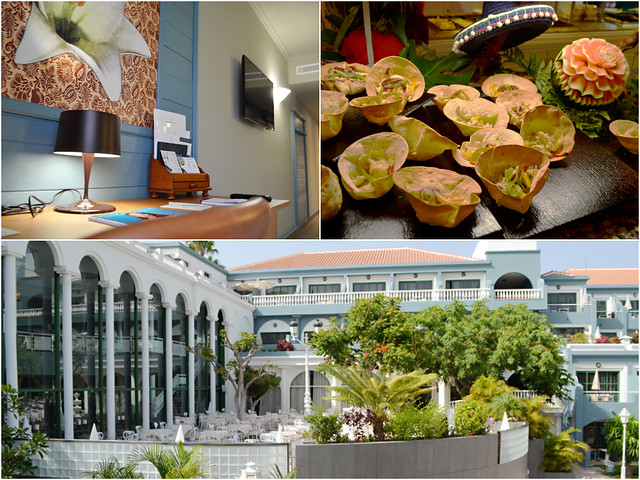 There were a couple of factors which raised dinner above the typical hotel buffet. The first was a team of chefs who prepared dishes to order. The second was the imaginative and extensive range of  the food on offer. It was a themed Mexican night when we stayed and there were lots of interesting little goodies I wanted to try. The display looked great as well. The third was that there was a selection of main meals you could also choose from a menu.

Similarly breakfast involved plenty of choice as well as freshly prepared dishes.  Nobody should be complaining that there wasn’t something for them.

What is the Best Thing About the Hotel Colon Guanahani?
For me, it’s the overall look and ambience which is partly due to the design and partly because it’s an adult only hotel. It has more of a sophisticated feel than many other resort hotels but not in a snooty, pretentious way – it just feels like a hotel for grown ups.

Who Would it Suit Best?
Definitely couples wanting to enjoy time together in attractively tranquil surroundings.