From the moment we first set eyes on the menu at Andana Beach Club behind Playa Jardín in Puerto de la Cruz we were keen to try it out. In a Tenerife town where traditional Canarian menus can dominate, it’s always a treat to be presented with a menu which is both original and creative.

The first time we tried to eat at Andana, there was a private party taking place. As it’s behind the beach, and we only tend to head to the beach when we have sun-seeking visitors, our Andana eating experience was postponed by a couple of months. 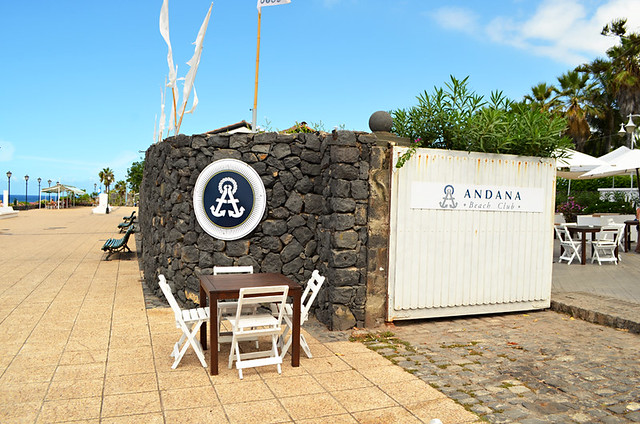 Eventually at the end of summer (our summer, not the one in northern Europe) we managed to get to eat lunch at Andana. Despite Playa Jardín being packed with Spanish mainlanders, there was hardly anyone else in the restaurant. A couple of hundred yards along the beach, a bog standard restaurant was jam packed with lunching sunbathers. Some travellers are of the belief that this might have been a sign Andana wasn’t very good as there’s a formula which goes along the lines of ‘lots of locals automatically equals good food’. Often it can be an accurate measure, but sometimes it can just be ‘lots of locals equals familiar food… or even cheap familiar food’.
The prices at Andana are competitive but another look at the menu told us many of the dishes might be a wee bit too adventurous sounding for anyone who likes their meat and fish simply grilled and served with the staple papas arrugadas and mojos. 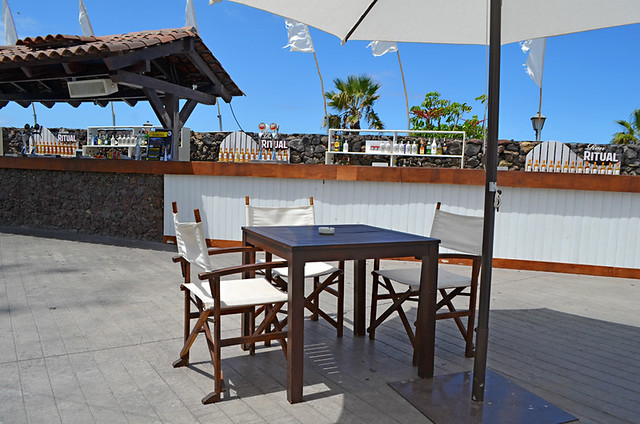 Andana doubles as an after dark beach club (rammed with locals at weekends) which makes its outdoor terrace feel more cocktail bar than restaurant. There’s also an attractive indoor area as well for when the weather isn’t behaving, or when you really need to escape the sun. We chose a chunky wooden table with white director chairs and a shade-giving umbrella on the terrace. One of the downsides, and maybe partly an explanation why there was a lack of lunch customers, is that a wall obscures views of the ocean.

Although the place opens at midday lunch isn’t served till 1.30pm. We were a bit on the early side but a thirst quenching Dorada helped pass the time until the kitchen opened. 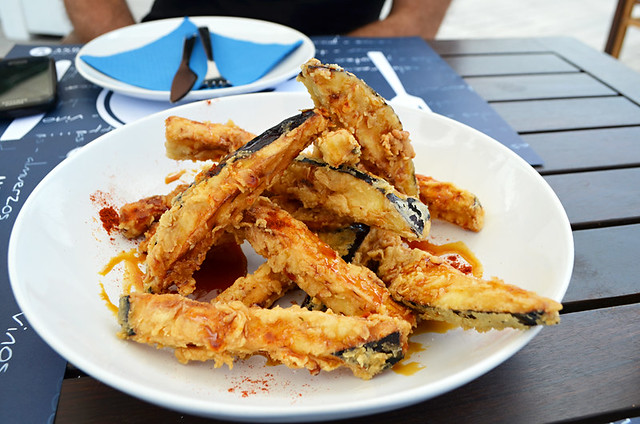 The menu consists of five sections – appetisers, finger food, land in sight (meat main courses), ocean swell (fish and seafood mains) and sweets.
We could have happily ordered every single thing listed, but in the end settled for four dishes from the appetiser and finger food choices.

The Food at Andana Beach Club
First to arrive was a generous plate of crispy, deep fried aubergine with miel de palma (palm honey) and paprika. It was good, it was very good… and quite filling. €5 spent on food, one dish down and three of us were already on the edge of being satisfied.
Dish two bombarded us with more fabulous flavours – red pepper hummus (I think it was red pepper as the menu only had it down as hummus) with light and crispy pastry twirls. More ‘MMMs’ all round. 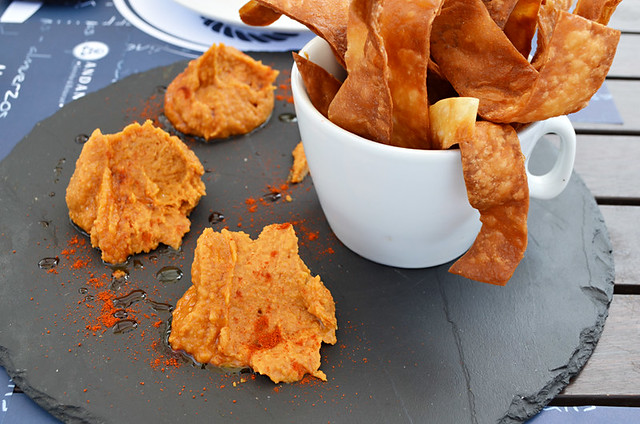 By dish three we were worshipping at Andana’s culinary altar and it didn’t let us down. The fish carpaccio, guacamole and nachos were exceptionally delicious.
The final offering of papas bravas with roasted garlic alioli was a dish too far. Again it was a generous portion, generous to the point it overfaced us. It was good, but not the strongest of the selection. Plus we were too full to really appreciate it… even though we ate it all;  it’s impossible to leave chunky wedges of crispy potato (it is for me anyway). 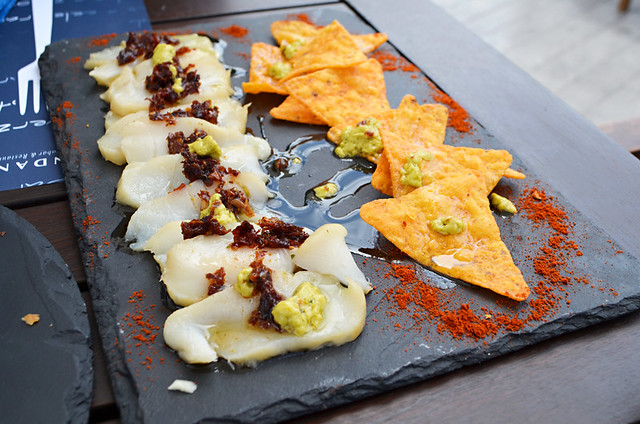 We left very impressed. Andana has aesthetically pleasing and relaxing décor and the staff were friendly in that wonderfully sweet Canarian way. Most importantly the food had the wide range of flavours we’d hoped for and had managed to surprise us with how different from the norm it was. It was also incredibly good value. Our four dishes came to €20. It was crazy that Andana was empty when places selling mediocrity on a plate were full.

I’m not even sure I knew there was such a thing as Chilean tapas. After trying some at the Arlequin restaurant in Playa San Juan, I’m kicking myself… […]