Even though the La Paz area of Puerto de la Cruz is only a 20 minute walk from us, we don’t often go there for a meal or to drink.
Despite having the Botanical Gardens, one of Tenerife’s classiest hotels and the spot where a key scene in one of Agatha Christie’s stories took place, it generally feels quite modern. So when we go out locally, we normally head to Puerto’s old town.

But I’ve come to the conclusion that we’re being stupid. Over the years a few cracking small restaurants have quietly appeared and then El Aderno, the king of Tenerife cake makers opened a café outlet that flourished.

Amongst the decent, but run of the mill, crowdpleasers there are imaginative and traditional tapas restaurants, an ecological Canarian vegetarian restaurant and the wonderful La Vinoteca Wine Shop. 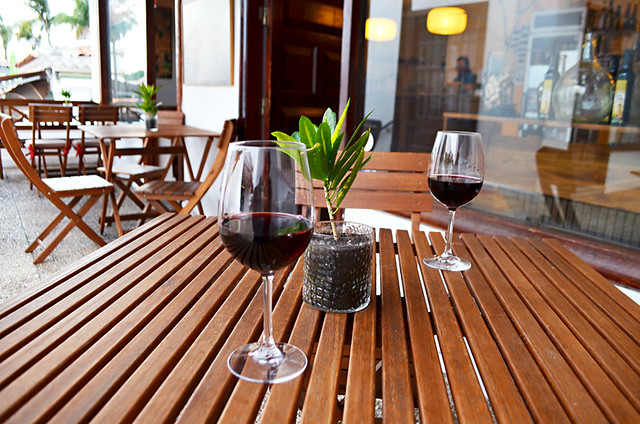 La Vinoteca is ostensibly a classy off-licence that specialises in Spanish and, more specifically, Canarian wines. Not just any old Canarian wines at that. Although there are familiar labels, quite a few bottles aren’t to be found on supermarket shelves. They come direct from small bodegas. There was one bottle of white from the Orotava Valley I’d only seen previously when it was Tweeted as a recommendation by an Oxford wine bar. Most of the bodega’s bottles, but clearly not all, are exported.

There are a few table and chairs outside of La Vinoteca. Inside is mainly devoted to wine and tapas with one table to sit at plus a chunky barrel with stools. 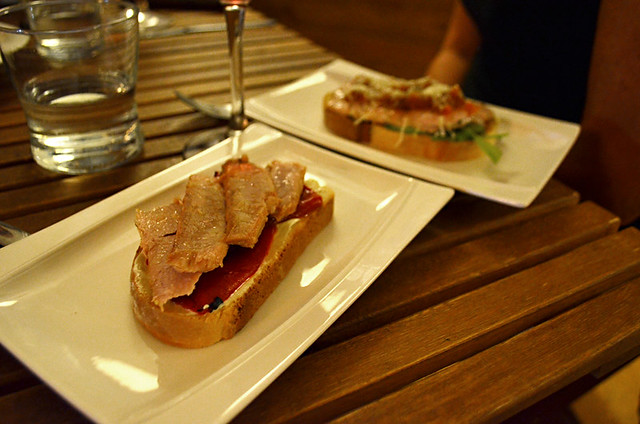 It’s unfussily stylish and cosy; drinking in an offie has a certain appeal. Copas of vino (a glass of wine) are good value – €1.90 to €2.20 – and the wine is quality. We settled down with a glass of Celeste Ribero del Duero whilst we waited for our pals to arrive.

Tapas treats at La Vinoteca
In many places on Tenerife the tapas served is often a racion (or medio racion) – which is like the tapas’ big brother. At La Vinoteca tapas are tapas with prices ranging from €1.50 to €6. The menu looks traditional Spanish but what arrives on your table tends to exhibit a bit more flair than the name on the blackboard suggests. 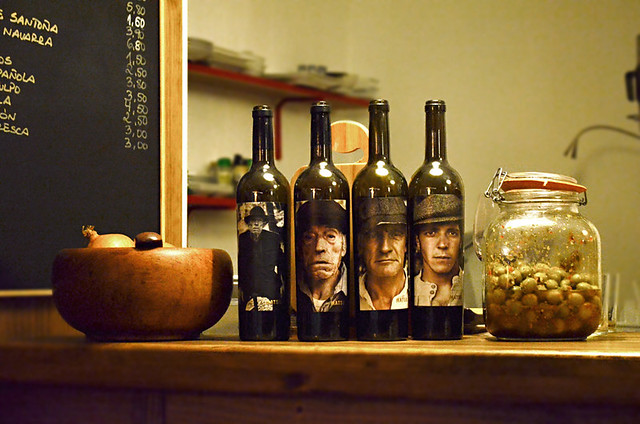 When our friends arrived we asked for a bit of help in picking a smooth, light and fruity local wine, opting for Arautava maceración; a true local red as it came from the valley behind us.

We picked at almogrote (cheese pate from La Gomera) and then montaditos with ventresca (quality tuna), spicy lomo (pork) and jamón ibérico before Andy’s nose was sweet-talked by an aroma from the tiny, open kitchen and enquiries were made as to what was being rustled up for a young Spanish couple.

It was chicken marinaded in wonderful curry-esque spices and plonked on a bed of mango marmalade made with fruits from Tegueste. Four more were promptly ordered. 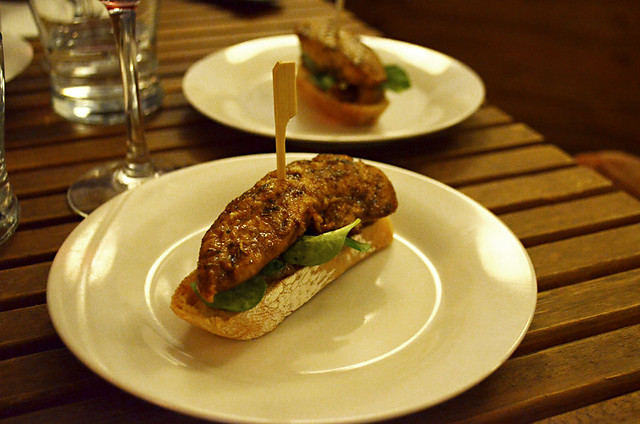 One of the things that is so good about La Vinoteca is that food and wine often come with information attached; like where the fruit for the marmalade came from. It makes wining and dining here a real personal experience. The owners are passionate about wine and food. Ask a question and you better hope the babelfish is in place. When I asked about good wines from around Tenerife for drinking without food, they were off an running, reeling off label after label.

La Vinoteca is one of those places that fits like a comfortable, and rather snazzy looking, shirt. It’s easy to spend time sipping at wine and picking at tapas.

Without being aware of the passage of time,  three and a half hours and a couple of bottles slipped by and it was time to head off back through the banana plantations to home, with Andy announcing that we should spend every Saturday night there.