We wanted to grab something to eat before heading to Plaza Europa to the Jazz y Mas concert on Thursday night. As usual, neither of us could make a decision about what or where to eat but Jack had noticed a new tasca opening four days ago in the La Ranilla district. We decided to head there and see if the menu rang our bell. At first we weren’t sure. We didn’t want a lot to eat and the ‘main’ courses looked a bit intimidating. But the list of starters looked interesting. We agreed a selection of shared starters would do us nicely and went in. 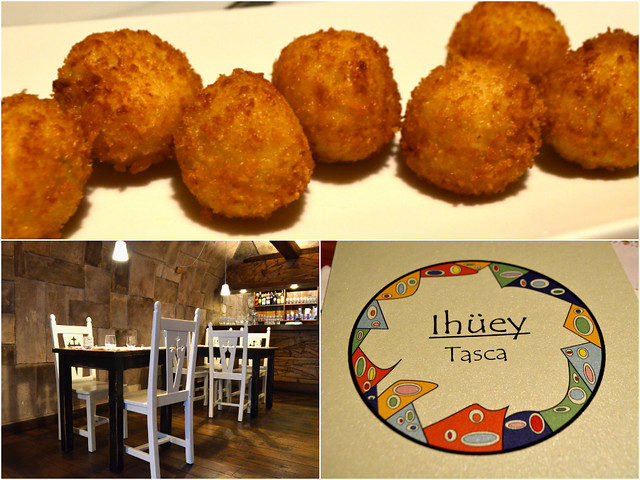 The only customers, we worried about the wisdom of opening a new restaurant in what is traditionally low season for dining in Puerto. The Spanish mainlanders who fill the town at this time of year tend not to dine out much so it’s a favourite time for restaurants to hang ‘cerrado por vacaciones‘ signs on their doors and disappear for a month.

We needn’t have worried for them. By the time we left, only three tables were unoccupied and the place was buzzing.

Where is Tasca Ihüey
By now, most people know that the place to find great gastronomy in Puerto de la Cruz is  La Ranilla, the former fishermen’s district which has now become the restaurant hub of the town. Formerly favoured by traditional, old fashioned restaurants, Calle San Felipe which borders the Ranilla district on its southern side is joining the district’s gastronomic ranks and it’s where you’ll find Tasca Ihüey, right next door to the excellent El Taller Seve Diaz. 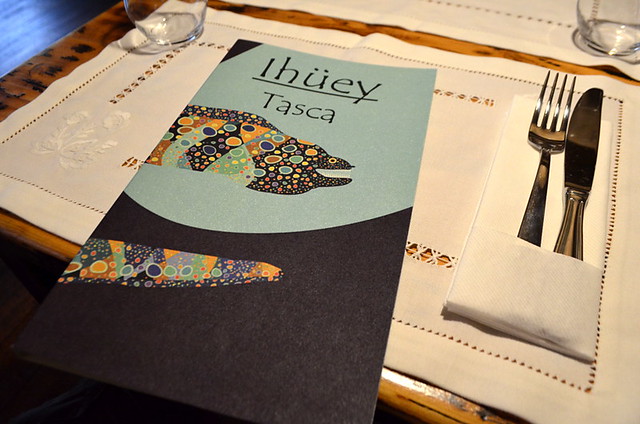 The new owner has taken a small space and transformed it into an intimate, chic, dining concept. The design is a simple, modern take on a wine cellar with exposed stone, vaulted ceiling and pillars. Gothic-style, white wood chairs suit the space perfectly. Pendulous lighting adds that intimate finishing touch to the restaurant which, with its glass frontage, looks sexy and enticing from outside.

The only feature I would change would be the outside terrace seating which looks cheap and out of place. Presumably the idea is to make that space more chill out but plastic tables and chairs just don’t do it.

The Food at Tasca Ihüey
The menu at Tasca Ihüey is small, just eight tapas starters and salads; six main meat and fish dishes; and three desserts. What that tells me is that this is a good restaurant where the chef prefers to prepare a few excellent dishes than a lot of mediocre ones. 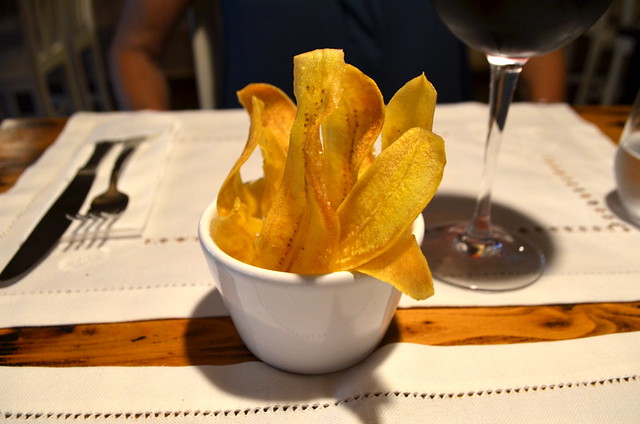 Ordinarily, I would have opted to share a starter and then choose a main course, any one of which I would happily have selected. The pork belly with garlic and honey praline and mashed potatoes had already caught my eye, as had the creamy rice with monkfish but as we’re not ravenous, we opt to share three starters between us as tapas and I had made a mental note of chocolate brownie hamburger on the dessert menu.

A tasty amuse bouche of salted, fried bananas whet the appetite as we chatted to the waitress and discovered that the chef is her boyfriend, Claudio Jean, who has worked in restaurants in various parts of the Spanish mainland before returning to Puerto to set up Tasca Ihüey.

The first of our dishes was cheese balls with palm honey. Looking like mini croquettes, the cheese balls were a beautiful balance of fresh goats’ and blue cheese in a light, crispy batter. The blue cheese livened up the flavour while the fresh goats’ cheese kept the richness in check. Dipped in a bowl of miel de palma from La Gomera to add a sweet finish, the dish worked beautifully. 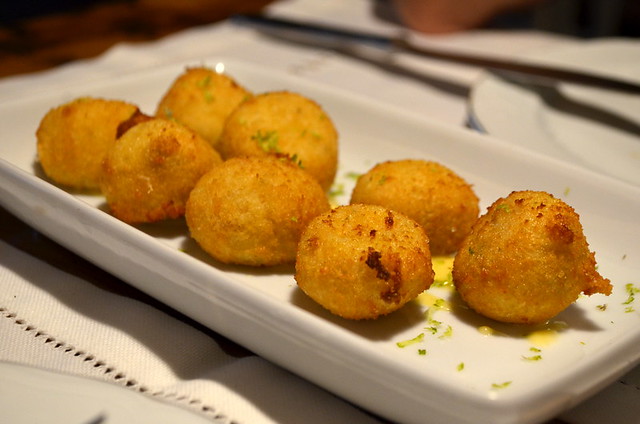 Next up was fish and Mediterranean herbs croquettes. We hesitated before ordering this dish, mainly because having just spent five days in Madrid, we’d indulged in croquettes on several occasions. When they arrived, they looked very similar to the cheese balls, having the same golden, crisp batter, but biting into them, the taste was very different. The use of fresh herbs and the smoky, creamy texture raised them into a very different league from the standard tapas menu offering, and the lemon Hollandaise sauce on which they sat just finished the dish perfectly with a mildly spicy aftertaste. 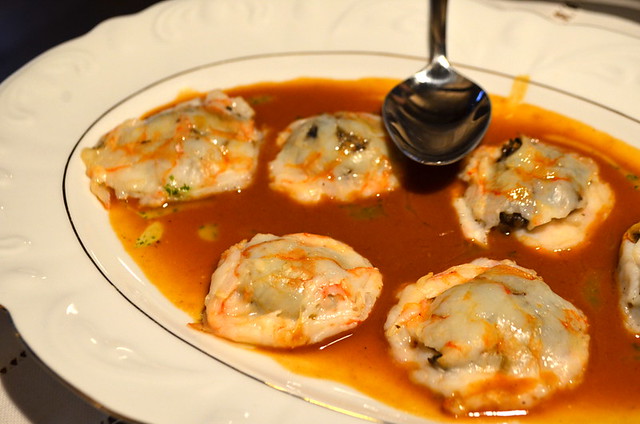 Our third dish was shrimp ravioli filled with mushroom served in a shrimp reduction which, when it arrived had a deliciously Chinese aroma. Cutting into my first ravioli, I was surprised to find the pasta didn’t yield as easily as I expected and, popping it into my mouth, it didn’t taste like I’d expected either.
“The ravioli is made from shrimp!” Jack declared, a smile spreading across his face.
Savoury, minced mushrooms effectively stuffed inside a shrimp, drizzled with a shrimp reduction, this was the most surprising, and the best, of a trio of excellent dishes. When Claudio Jean popped out from his kitchen to say hello, I asked him if the shrimp ravioli were fiddly to make.
“No,” he said. Then he hesitated before contradicting himself. “Yes, they are,” he admitted, laughing. “But once you’ve done a few it gets quicker and easier.”

As hoped, there was just enough room left for dessert and although I was pretty much set on the hamburger chocolate brownie, we asked to see the menu again.
“Gofio crumble, cherries and white chocolate ice cream,” said Jack. I hadn’t spotted that one.
“We also have tiramisu with red fruits,” said the waitress, throwing more fuel onto the indecision fire.
The gofio crumble won. A clever balance of textures and flavours, sweet, soft cherries formed the base layer, topped with crunchy, nutty, gofio crumble, and finished with creamy white chocolate ice cream. It must have taken around two minutes for us to devour it. 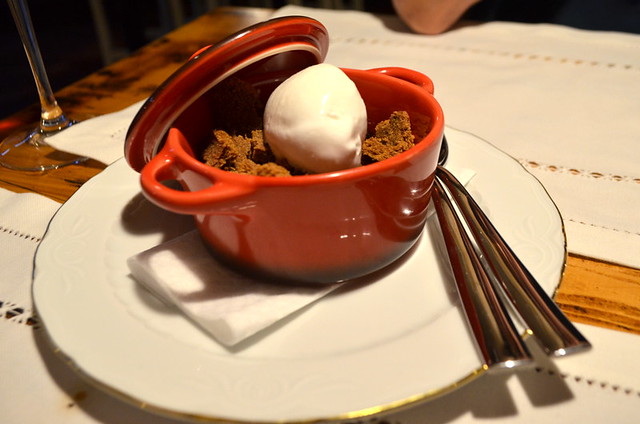 Tasca Ihüey is another excellent addition to Puerto’s gastronomic scene which continues to blossom. Fresh, innovative dishes prepared and presented with skill and care, and a regularly changing menu will ensure we’ll be back.

Andrea (Andy) Montgomery is a freelance travel writer and co-owner of Buzz Trips and The Real Tenerife series of travel websites. Published in The Telegraph, The Independent, Wexas Traveller, Thomas Cook Travel Magazine, EasyJet Traveller Magazine, Wizz, you can read her latest content on Google+