I’ve been carrying out research recently which partly involved reading Tenerife restaurant reviews. I have a slightly masochistic love of reading restaurant reviews. The more they make me exclaim “YOU CANNOT BE SERIOUS” , the more I like reading them.

Certain topics come up on a regular basis that can result in restaurants being given negative reviews which are undeserved for a number of reasons. These reasons are often cultural ones, which is understandable. Visitors who are unfamiliar with the culture can’t be expected to know how things work. But that doesn’t necessarily warrant a restaurant being given a bad review.  Cultural differences might explain why some restaurants get great reviews from locals but not from visitors, and vice versa.

With this in mind here are ten tips to eating in traditional restaurants on Tenerife. 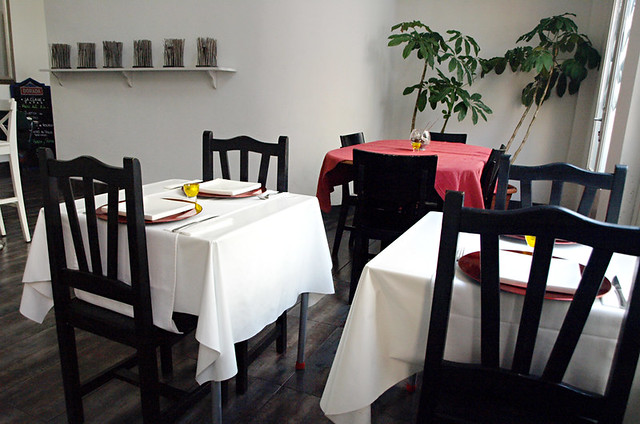 Get the timing right
People regularly remark about a lack of atmosphere or an absence of other diners in traditional restaurants. Stick to popular British eating hours and that’s no surprise. Lunch here is eaten after 1.30pm and dinner can be anywhere after 8.30pm. Eating lunch at midday or dinner at 7pm in a Canarian restaurant and you could be dining in a restaurant with all the atmosphere of the nearest cemetery. 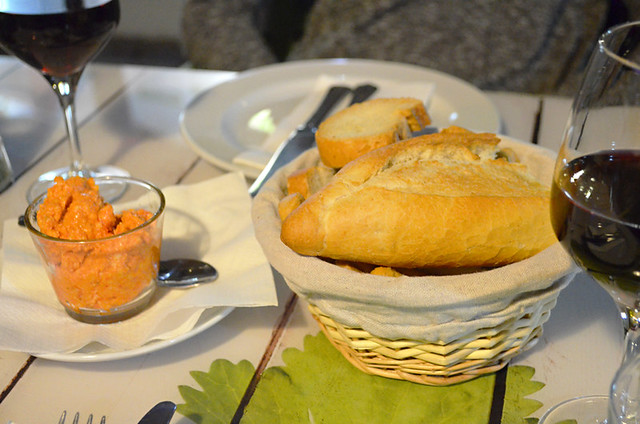 The bread basket
A basket of bread is one of the first things to arrive on the table even though you haven’t requested it. Mostly this isn’t a freebie, diners are usually charged for bread. Personally I like having bread with my meal mainly because of the next tip on the list. Sometimes you might be asked if you want bread, often you won’t. But if you don’t want bread say so as soon as it arrives at the table.

I can’t believe it’s not butter
Often with the bread comes things to dip it in or spread on it. Normally this doesn’t include butter. In the more contemporary Canarian restaurants, flavoured butters are increasingly common. But in traditional ones the chances are you’ll get mojos (Canarian sauces) or alioli (garlic mayonnaise). I’ve read comments saying it was strange to be served mayonnaise with the bread. Strange maybe in Tenby, but it’s the done thing on Tenerife. 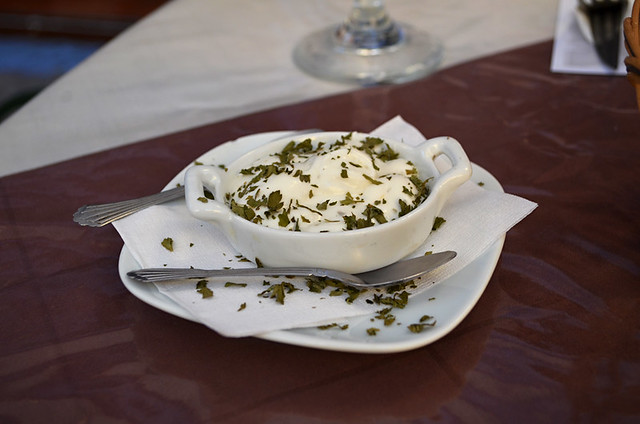 Slow food is good
Slow service is a common complaint. When we first started travelling together we treated dining as something to get over quickly so we could hit the bar. Restaurants on Greek Islands drove us barmy with the snail’s pace of a service. But over the years we came to view the meal as the evening’s entertainment. Living here has consolidated that. We lose afternoons over lunch and dinner can last for hours. The culture here, as it is in other parts of Spain, is that dining is to be enjoyed at a leisurely pace. Service can reflect this. 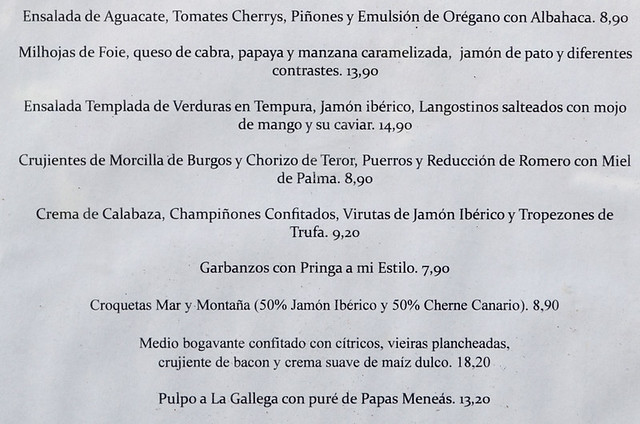 The mystifying menu
We always ask for the menu in Spanish even in restaurants in the heart of Puerto de la Cruz which are used to serving a variety of nationalities. It’s good for our Spanish and what’s more, English translations aren’t always accurate. Shortly after we arrived Andy ended up in one restaurant with a cold terrine after ordering what had been described as a fish pie (visions of chunky fish and prawns topped by creamy mash). In one restaurant we know there are items on the Spanish menu that aren’t on the English version. It’s worth asking for an English and a Spanish menu so you can compare and contrast. 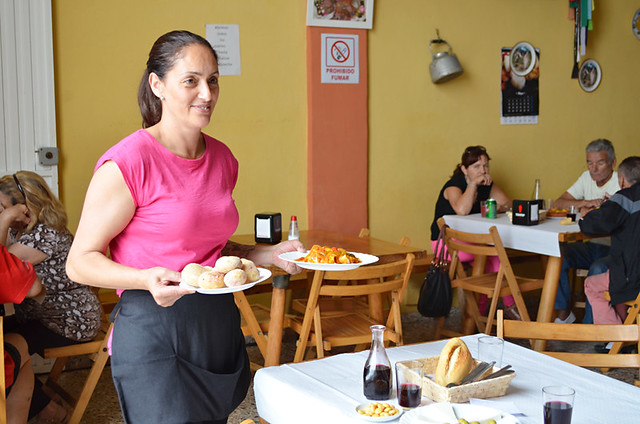 Rude staff
I’m constantly reading about surly staff in restaurants where we’ve only ever encountered amiable ones. We have had experiences with waiters who came across as rude or surly, but not usually in traditional areas. This is Tenerife amable after all.
On many occasions we’ve witnessed communication problems due to language differences. Waiters struggling to understand what a customer wants can be interpreted as rudeness. English isn’t as widely spoken as people might expect and attempting a couple of basic words in Spanish goes a long way to unlocking smiles and a different attitude. 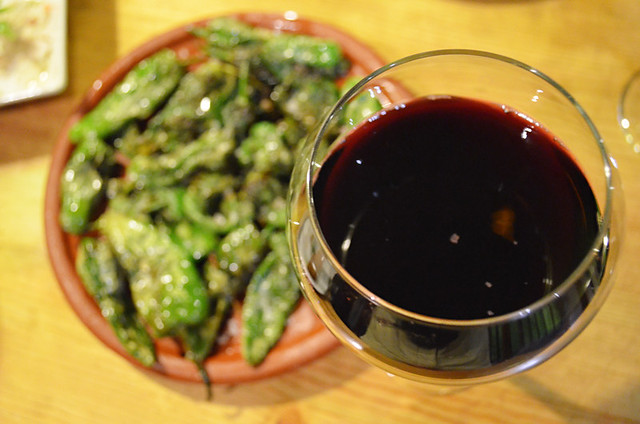 Go local with the wine
Forget Rioja and Ribera del Duero and try the local wine. There are some excellent Tenerife wines; literally award winners. There are over 70 bodegas on Tenerife producing white, red, rosé and sparkling wines with varying flavours. Look at some online discussions about wine on Tenerife and you wouldn’t know Tenerife produced its own wines as they’re dominated by suggestions for mainland brands. We only buy local wines now. 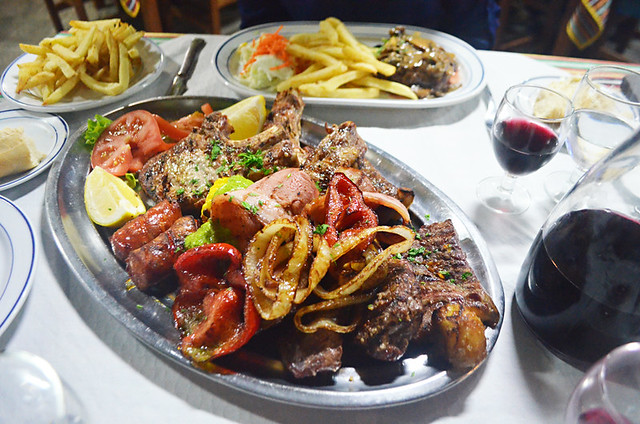 Murdering steak
In a restaurant a friend asked for her steak to be well done, adding “you know, that way which makes it really tender.” The waiter replied candidly, “but if you want it well done it won’t be tender.”
The number of reviews which criticise restaurants because the steak didn’t have the flavour and tenderness burnt out of it has me banging my head against a wall. The behind-the-scenes book Kitchen Confidential revealed chefs kept the worst cut of sirloin for diners who requested steaks ‘well done’ because they wouldn’t be able to tell the difference between a good steak and a bad one after it was turned into ‘a flavourless, leathery hunk of carbon’. Often on Tenerife steaks which were supposed to be ‘well done’ arrive with a pink middle, the chef clearly unable to massacre a good piece of meat. I mentioned this to a friend and he responded “if I like it well done then surely that’s my choice and I shouldn’t be criticised for it?” I totally agree… as long as he doesn’t then post a review online criticising a restaurant for serving him with a perfectly cooked steak instead of one which has been ruined. 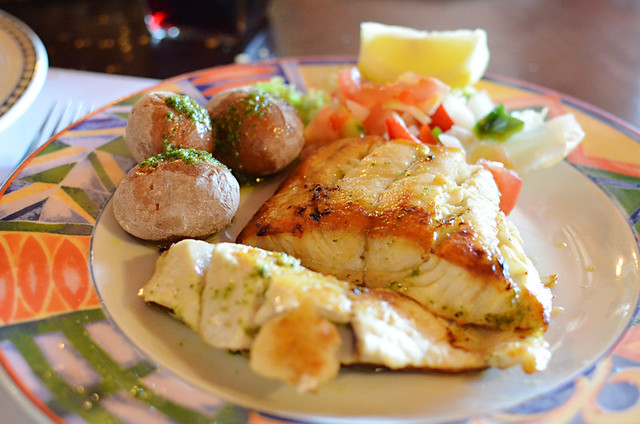 Where are the vegetables?
A lack of any decent vegetables is a regular cause for complaint from British visitors. A variety of vegetables turn up in stews on Tenerife but rarely accompanying meat or fish. The best you’re likely to get is a bit of salad which is more garnish than anything else. In the words of Bruce Hornsby & the Range, that’s just the way it is. 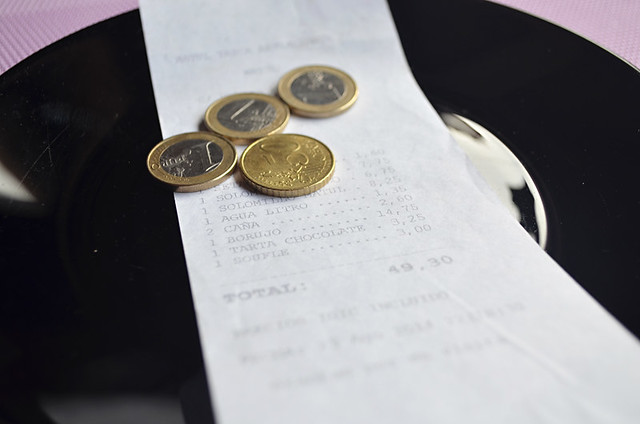 One final tip
There’s no expectation when it comes to tipping on Tenerife. We always left 10% until a Canarian friend told Andy off for leaving too much. Locals just round up if they leave a tip at all. Now we do the same and round up…  to something close to 10%. Old habits die hard.