We were gutted when Mil Sabores changed hands as it was one of our favourite restaurants in Puerto de la Cruz. Apart from a tapa on a ruta de tapas, we still haven’t had a meal in the new version even though friends have given it the thumbs up.

A couple of months ago we heard Mil Sabores (the old version) had been reincarnated in another part of the town and with a different name, La Esencia.

La Esencia is located at the end of the passage Calle Uruguay in the Martiánez side of Puerto de la Cruz. It’s not a passage most people would walk down, so easy to overlook. However, given that Mil Sabores’ ‘thousand flavours’ seemed more popular with visitors than the local Canarian population, the new location on the tourist side of town probably suits the menu better. 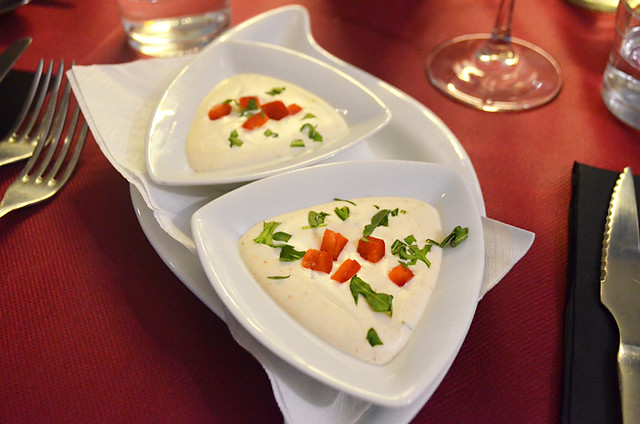 First chance we got, we booked a table to find out if La Esencia still had that certain essence we used to enjoy so much.

On a coolish Saturday night in January only a couple of die-hards occupied the terrace tables. Inside most of the tables in the tastefully stylish interior dining area were taken by Brits, Germans and Scandinavians. The balance changed more to Spanish speakers later in the evening, illustrating the  ‘two sittings’ you find in some restaurants in Puerto de la Cruz thanks to Northern Europeans eating early and Spanish/Canarians eating late.

One look at the menu and it was immediately clear that the name might be new, but with Angel y Diablo, Torre de Babel and Atlantic fish with langoustines in a lobster and Pernod sauce this was a menu we’d pondered over many, many times in the past. 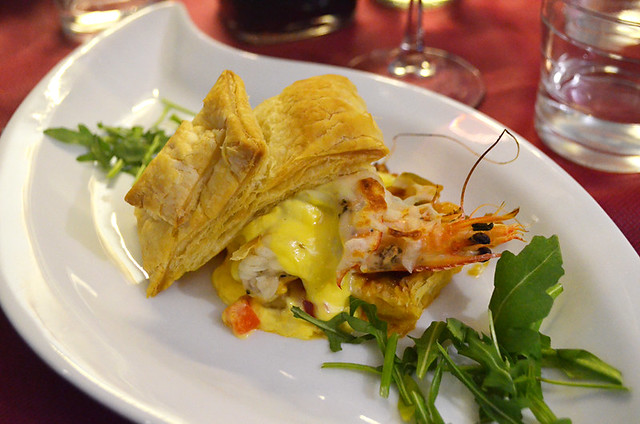 And, once again, we pondered some more, taking ages to make a decision as so many dishes sounded so tempting.

The Food at La Esencia
Creative soups, tapas and salads cause enough problems, but add imaginative pastas, meat, fish and a couple of vegetarian dishes and our foursome of folk who all love to have their tastebuds swept of their metaphoric feet were in trouble.

The atmosphere was relaxed and casual and a couple of ‘a few moments more’ requests didn’t fade the smiles from the waiters’ faces. Eventually decisions had to be made. 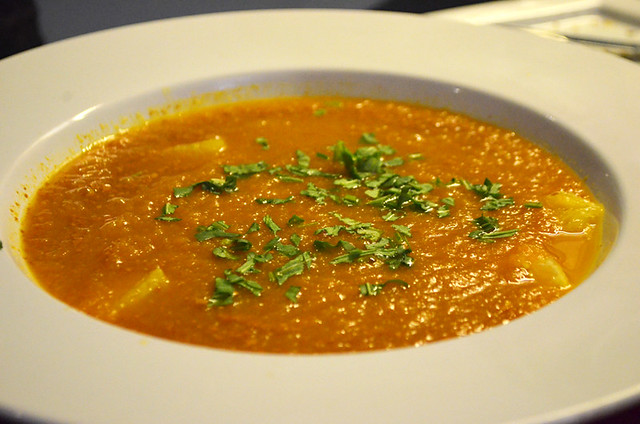 Andy was finally seduced by the idea of carrot, orange and ginger soup whilst I found it impossible to say no to gratinated prawns and vegetables in puff pastry. To follow, I mentally tossed a coined between the Biblical contenders Angel y Diablo (spicy pork fillet and chicken in honey sauce) and the Tower of Babel (a tower of beef and pork medallions with a hollandaise/herb sauce). The angel/devil combo won. Andy was slightly more decisive, choosing beef medallions in Madeira sauce with gnocchi potatoes and seasonal vegetables.

Whilst we waited a couple of daintily attractive appetisers did a good job of warming us up work for the main performance, whilst a carafe of house wine helped chill the atmosphere even more. 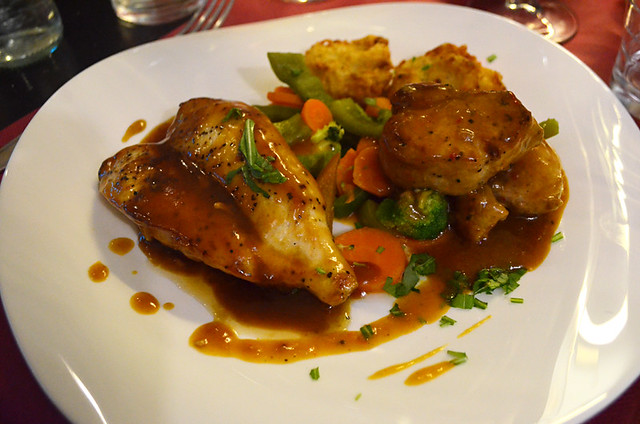 It felt like catching up with an old friend after a gap of a couple of years and finding nothing much had changed. The food was still packed with flavours that complimented each other and was beautifully cooked to the point that it seemed to be gone before I registered it (helped by the fact that we were chatting incessantly). It was all comfortably familiar which was obviously a nice, easy feeling.

On the other hand, it was so familiar I realised afterwards that enjoyable as it was, it didn’t feel like a new dining experience. Maye a downside from my point of view but not something that’s likely to be an issue for anyone who hasn’t feasted from this menu lots of times. 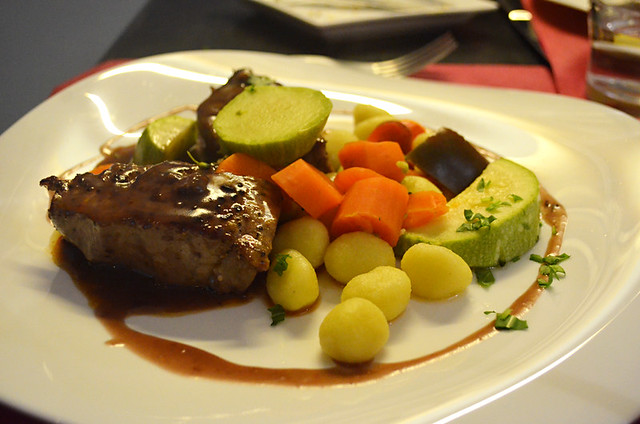 La Esencia occupies a culinary middle ground that combines robust, generous portions with contemporary cuisine with a Mediterranean influence. It’s the sort of restaurant that would please a wide mix of diners; from those who like their meat and two veg to people who enjoy a bit of creativity and a burst of flavours. With good vegetarian dishes, it’s also ideal for mixed company (meat and non-meat eaters).