In our A to Z of Tenerife Part 1 we included a diverse range of things we like and find interesting about Tenerife, from a leper village to its colourful, and sometimes spicy, sauces. Part 2, N to Z, includes a famous English admiral, an other-worldly flower, and the Canarian gastronomic speciality that everyone loves. 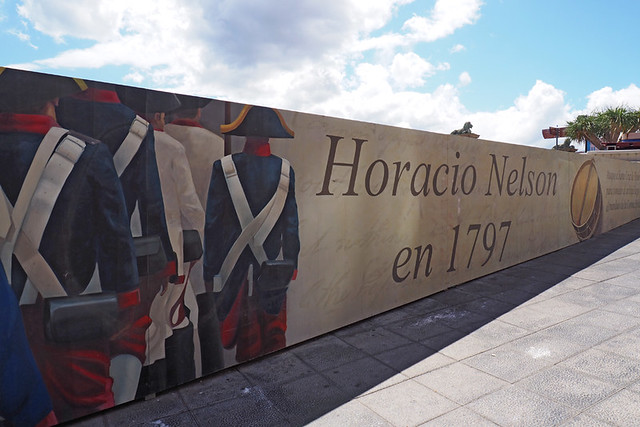 N is for Nelson. For anyone who doesn’t know, on 25 July 1797 Rear-Admiral Horatio Nelson launched an assault on Santa Cruz in which his troops were repelled by the Spanish and the admiral lost his right arm. The victory is re-enacted in Santa Cruz each July and el Tigre, the canon allegedly responsible for Nelson’s injuries, can still be seen on display in the ruins of the Castillo de San Cristóbal underneath Plaza de España. According to Spanish history Nelson wasn’t the only British admiral to come a cropper at Santa Cruz. Robert Blake was also defeated during the Battle of Santa Cruz in 1657. However, with that one, British history shows a different view of the outcome. Our neighbour claimed to have the last letter Nelson wrote using his right hand. But then, he claimed a lot of surprising things. To be fair, many of them turned out to have substance. 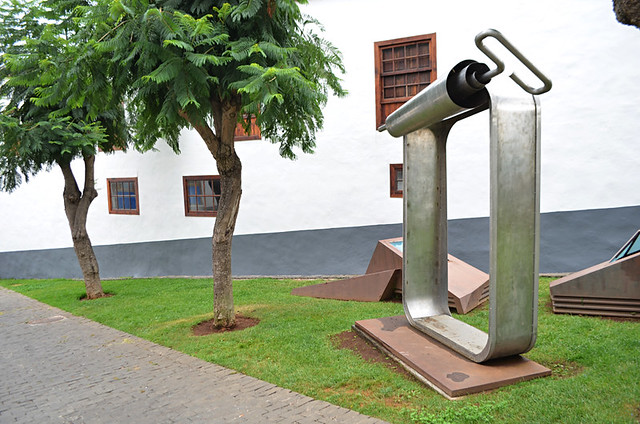 O is for Óscar Domínguez. Óscar Domínguez is arguably Tenerife’s most famous artist. He was a renowned Spanish surrealist whose works have been exhibited in the most prestigious art galleries around world. He was born in La Laguna but raised by his abuela in Tacoronte. Óscar Domínguez was a fascinating and troubled character, with a lifestyle which was nearly as colourful as his paintings. He died prematurely, taking his own life during New Year’s Eve when he was 51, an act he’d depicted years earlier in one of his paintings. There are nods to Óscar Domínguez in locations across the north of Tenerife, especially around Tacoronte. The house in which he was born in La Lagunas is now a tasca; the trunk of a drago tree in Tacoronte is encased in a sculpture in his style; the walls of the restaurant at Bodega Monje feature many prints featuring Domínguez and his work. 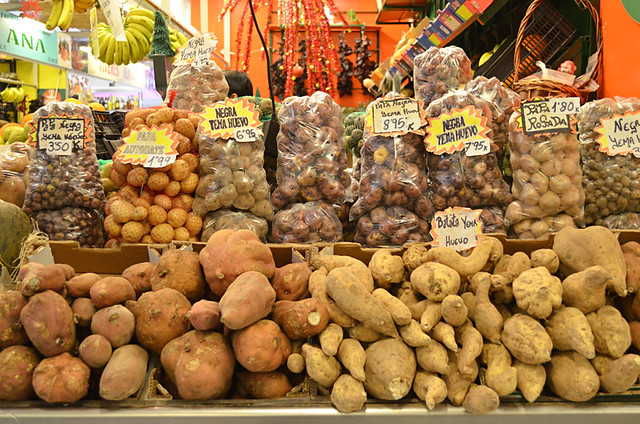 P is for papas. This is another which works equally well in Spanish and English as papas are potatoes. We’re not just talking the papas arrugadas that everyone knows about, we’re talking special Tenerife papas. Tenerife is known for its potatoes as there are nearly twenty varieties which are descended from the very first potatoes brought to Europe from the Americas. These are the ancient varieties and tend to be small, like misshaped new potatoes. They’re also delicious – to paraphrase a UK supermarket, you can really taste the difference when you’re served these. They’re common in some traditional areas, especially in the best Canarian restaurants, and you find them at farmers’ markets. But most of the varieties used for papas arrugadas outside of traditional areas are bog standard ones rather than Tenerife’s speciality, ancient papas. 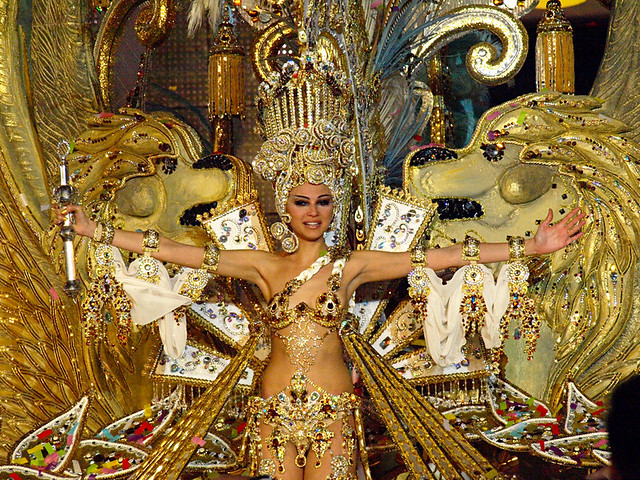 Q is for queens. Beauty queen contests might seem a thing of the past in Britain. But on Tenerife they are still going strong. The most spectacular and flamboyant of them is the election of the Carnival Queen in Santa Cruz. But just about every fiesta that takes place throughout the year in towns across Tenerife has fiesta queen competitions as part of the events, even the smallest ones in out of the way places in the hills. Then there are the old school beauty contests as well, featuring competitions for males as well as females. There’s a reason there are so many hairdressers around the island. 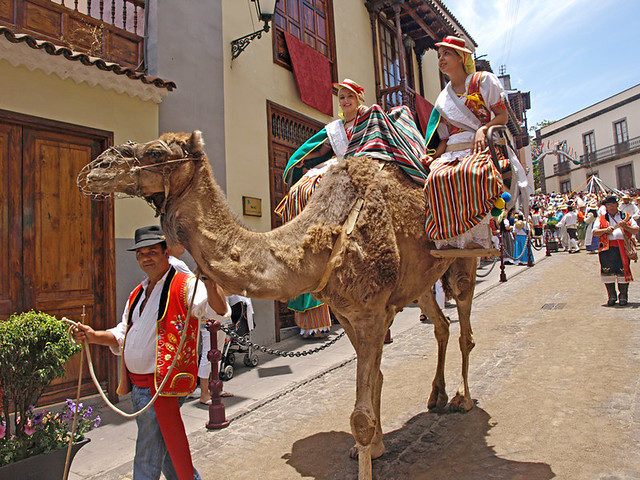 R is for romería. Romerías are a huge part of traditional Tenerife. They’re colourful processions, usually linked to the land and culture, which had there origins in people travelling from their homes to towns where festivities honouring particular saints were taking place. The journey tended to involve much singing, dancing, drinking, and eating. They might have been religious but there were pagan influences as well, often the case among countryfolk. The idea hasn’t changed much in centuries, at today’s romerías people wear traditional dress and travel in oxen-drawn carts, handing out food and drink as they trundle along. There are loads of romerías held across Tenerife. I started to count them once and gave up trying at 100. They take place year round, although there are some months where there are none or hardly any (November, December, February, March). May and June are the best months for them, although July to September is also good. Some are huge, attended by thousands, whereas others are small scale local affairs. 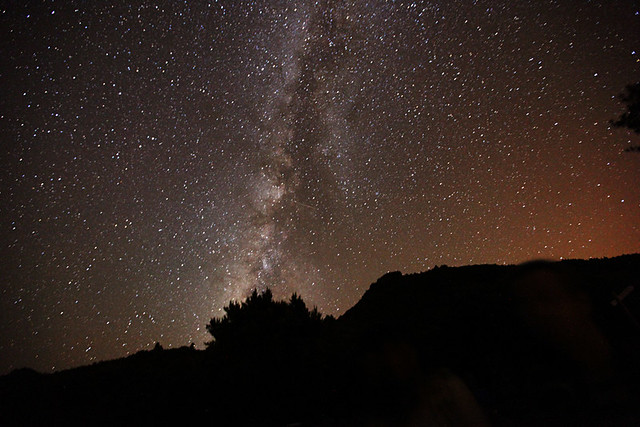 S is for stargazing. The three best places on the planet for stargazing are Chile, Hawaii, and the Canary Islands, specifically Tenerife and La Palma. During daylight hours, the gleaming domes of international observatories at Izaña add to the other-worldly vibe in Teide National Park. Whilst there are stargazing tours on Mount Teide, you don’t have to travel to the top of Spain to enjoy the magical night skies. Anywhere away from urban centres will reward with special views of a sky which is alive with sparkling jewels. Stare at them for a few minutes and there’s a decent chance you’ll see shooting stars. 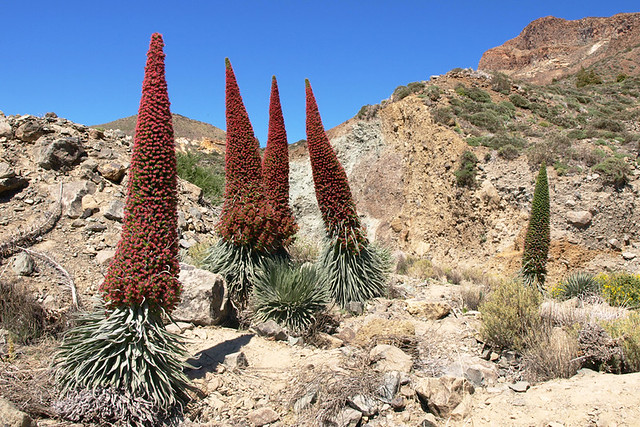 T is for tajinaste. The wildly contrasting colour schemes, solidified lava flows, and twisted rock formations of Teide National Park create a surreal landscape at any time of the year, but in late spring life bursts onto the scene in spectacular fashion when the tall tajinaste rojo plants bloom, their scarlet spikes (up to 3m high) making the crater seem even more other-worldly. You can’t seem them all over the park, they tend to bloom in clusters in various areas, so it’s possible to drive through the crater when they’re at their best (May/June) and not spot any. Tajinaste rojo tends to grab most of the attention, but there are other gorgeous tajinastes to be seen around the island – whites, blues, and purples. 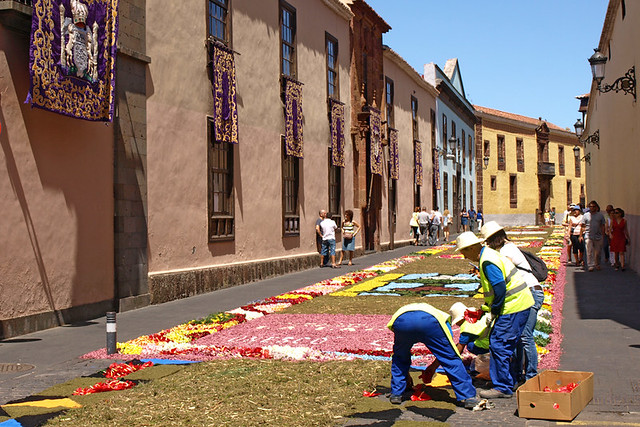 U is for UNESCO sites. Having somewhere declared a World Heritage Site is a big deal as, to use UNESCO’s own definition, “World Heritage is the designation for places on Earth that are of outstanding universal value to humanity and as such, have been inscribed on the World Heritage List to be protected for future generations to appreciate and enjoy.” In shorthand, these are very special places, and Tenerife has two; the old quarter of San Cristóbal de La Laguna (a blueprint for cities across the Americas) and Teide National Park. Tenerife actually boasts a third UNESCO title, Anaga is a UNESCO Biosphere Reserve. These are areas recognised for having an ecologically sustainable and balanced relationship between humans and nature. 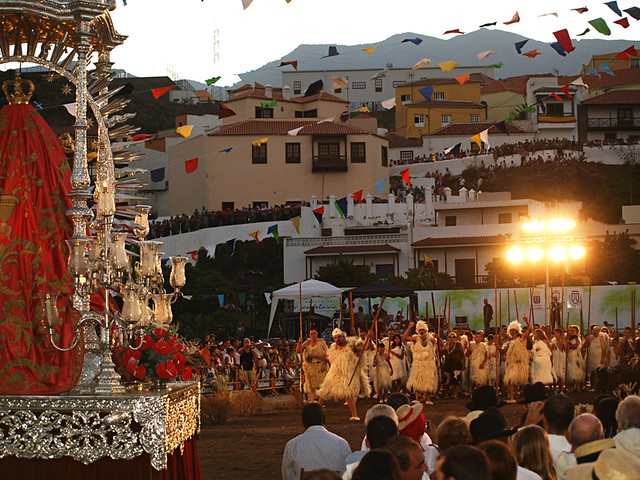 V is for Virgen de la Candelaria. Legend has it the patron saint of the Canary Islands, the Virgin of Candelaria, first appeared to two Guanche goatherds near Candelaria long before the conquest of Tenerife. The re-enactment of this even is a hoot. Subsequently there are fiestas in her honour, the main one being in August when tens of thousands of pilgrims make their way across the island to the town of Candelaria on Tenerife’s east coast in order to celebrate the Virgen’s ‘arrival’ on the islands. 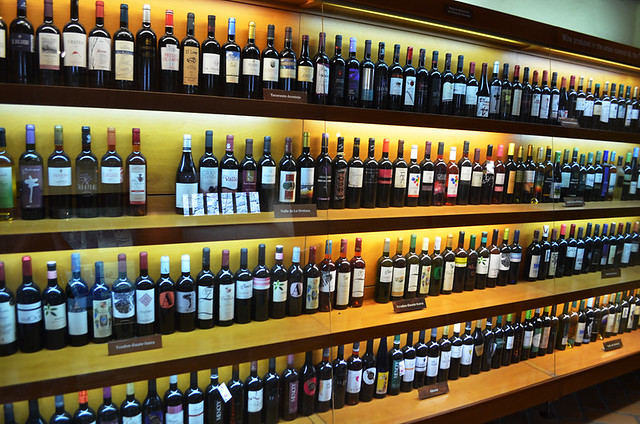 W is for wine. It drives us mad when someone on the travel website Tripadvisor asks about wine on Tenerife and replies flow in recommending Spanish Rioja, or Ribera del Duero wines. It drives us mad because Tenerife has so many excellent home-grown vinos. There are five wine growing areas on the island, each producing wines with contrasting flavours (some are better for reds, others known more for whites), and there are at least 70 wine-producing bodegas. Add to that all the small-scale producers, including guachinches and houses with ‘Se vende vino’ notices pinned to their walls, and you’ve got a hell of a lot of local wines to try. The photo shows a selection of the Tenerife wines available. We prefer them to many mainland Spanish wines as they’ve generally got a more interesting character. 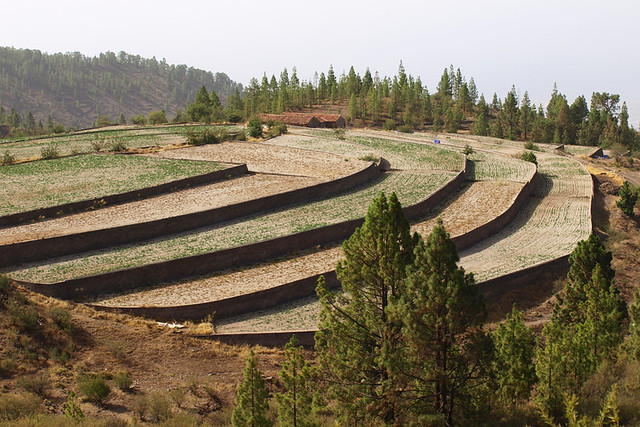 X is for Xeriscape. Xeriscapes are, and I didn’t know this till I searched for an X word that might fit, landscapes designed to reduces the need for supplemental water from irrigation. These are especially useful in areas susceptible to drought. In Vilaflor there are lots of pale-coloured, stepped terraces used for growing potatoes. These are covered in jable (pumice), sometimes also known as zahora, which collects and retains water from the low clouds, keeping the plants under them watered and therefore cutting out the need for irrigation. 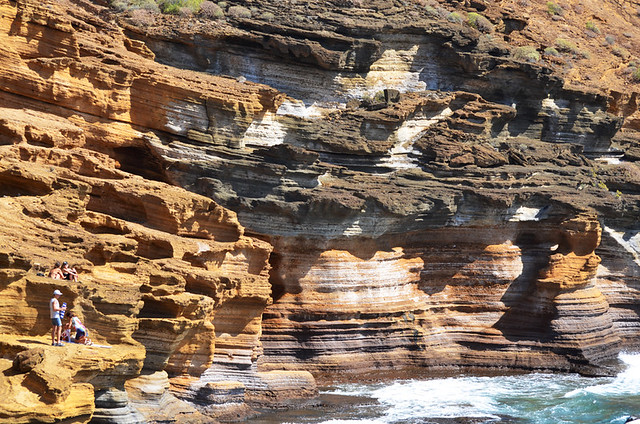 Y is for Yellow Mountain. The Yellow Mountain, or Montaña Amarilla to give it its Spanish name, is a striking volcanic cone at the coast in Costa del Silencio. Due to its yellow tones and layered shelves, it’s one of the most unusual and captivating sights around Tenerife’s coast in our view. It’s unusual in another way in that it was formed by an underwater eruption rather than a land based one; and you don’t find many of those around Tenerife. 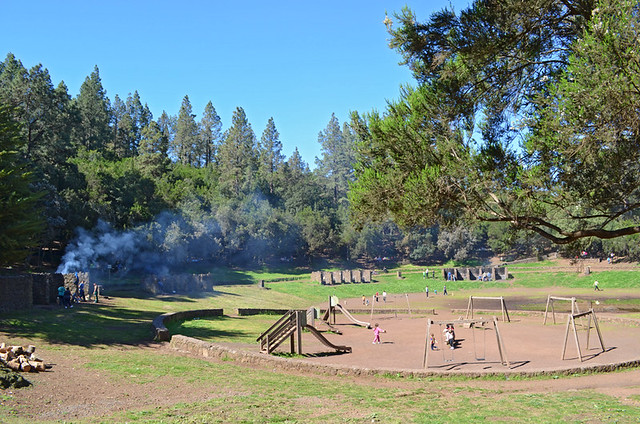 Z is for zona recreativa. A zona recreativa is a picnic zone – an area, usually in a natural beauty spot, where there are picnic benches, stone barbecues and various other leisure facilities. At weekends, locals flock to these and there’s a wonderful party atmosphere, as well as some incredible aromas. There are 20 official ones around the island (16 in the north, 4 in the south) with enough benches to accommodate numbers ranging from a couple of hundred to over 800 picnickers. Years ago we took friends who live on the south coast on a walking route around Arenas Negras, passing its zona recreativa, which can accommodate 400 people. It was a weekday and the place was virtually empty.
“Why so many tables?” One of our friends asked. “They’ll never be enough people to warrant all of these.”
He’d never seen a Tenerife zona recreativa on a Sunday.