June kicks off the start to a long dry (normally) summer. The Spanish mainlanders arrive towards the end of the month whilst in between are some of the most colourful events of the year.

Corpus Christi and Tenerife’s Flower Carpets
The most colourful and sweetest smelling festival on Tenerife is the Corpus Christi celebrations in La Orotava. This year it falls on 11 June (always a week after the date of Corpus Christi).
Beautiful flower carpets are laid on the lovely old streets around Orotava’s town hall and the Iglesia de la Concepción. The centrepiece of the event is the huge sand tapestry in the plaza in front of the town hall which is a transient work of art, weeks in the making and tramped over at the end of the Día de Alfombras (day of the carpets). There’s a party atmosphere and people travel from all over to see the carpets. Up until siesta time it gets vary, very busy, but it’s worth the slow crawl around the route to see these fantastic creations. Turn up after 3pm and you’ll find the streets are a lot quieter. 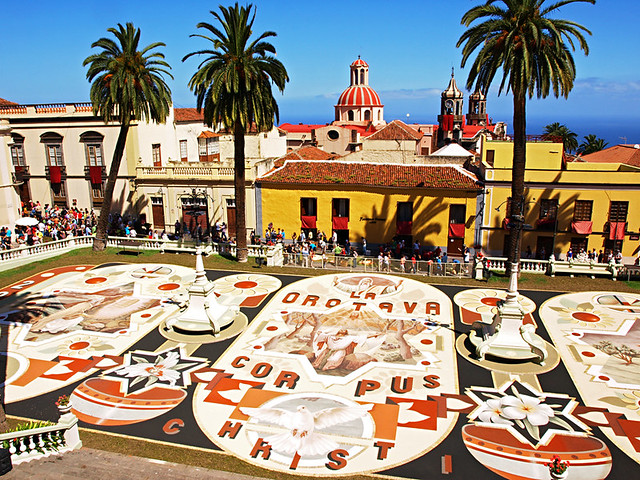 Flower carpets are laid in lots of towns across Tenerife (Santa Cruz, Guia de Isora, Tacoronte, Adeje etc.) in the week before La Orotava’s, but none are in quite the same scale, or as elaborate. La Laguna’s (7 June) has more carpets but, like a lot of other places, most are made with coloured salt rather than flowers.

Three days after the Día de Alfombras, La Orotava holds one of the most vivacious romería’s on Tenerife in honour of San Isidro and the streets are filled with colour yet again.

Fiestas de San Juan
The time of magic and love, on Midsummer’s Eve (23 June) Canarios head to the beaches across the island to enjoy beach parties and a midnight swim. The biggest and best, usually featuring live bands, is at Playa Jardín in Puerto de la Cruz. It’s not the place for anyone who doesn’t like crowds as the beach is packed to capacity with revellers. If you don’t mind crowds and a party atmosphere it’s great fun – food, lots of wine and a swimming costume are essential. Midnight bathing is said to guarantee good health, fertility and the chance of love. 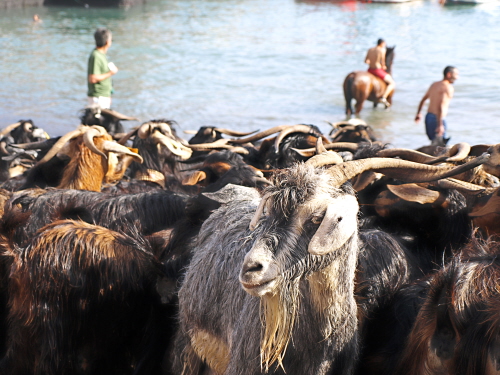 In some other towns, especially in the hills above Icod de los Vinos, the San Juan tradition is to leap over bonfires (called Los Hachitos). Bumming about on the beach is a far less risky business.

Midsummer morning (24 June) sees the wet and noisy baño de las cabras (bathing of the boats) in Puerto de la Cruz at the harbour. The goat bathing starts from early morning and is fascinating to watch as goats from the La Orotava Valley are dragged kicking and screaming into the water. No animals escape their annual dip; after the goats it’s the turn of horses and any other animal that wanders by. It’s a tradition that dates back to the time of the Guanches.

There are a few romerías to choose from this month: Guamasa, La Laguna (7 June), Tacoronte (28 June). There are also traditional fiestas in El Sauzal, Santiago del Teide and Guimar. 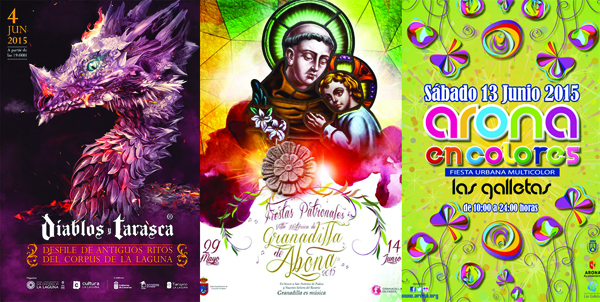 Ritmos del Mundo (Siam Park, Costa Adeje, 13 June, 3pm to Midnight)
Once again, like last year, the good news is that one of the biggest and most popular summer DJ fests is back rocking Siam Park. The bad news is it’s totally sold out.

Latino Festival (La Laguna, Plaza del Cristo, 9pm, 6 June)
Anyone who regularly goes to any of Tenerife’s big fiestas might ask ‘aren’t they all Latino?’ But this free festival in the former capital is entirely devoted to hot and steamy Latino sounds and moves.

Fiesta de la Música (La Laguna, Plaza de Santo Domingo, 20 June)
A bit of a musical free for all with all sorts of music styles. It’s a good way to see some local talent in one of Tenerife’s historic cities. 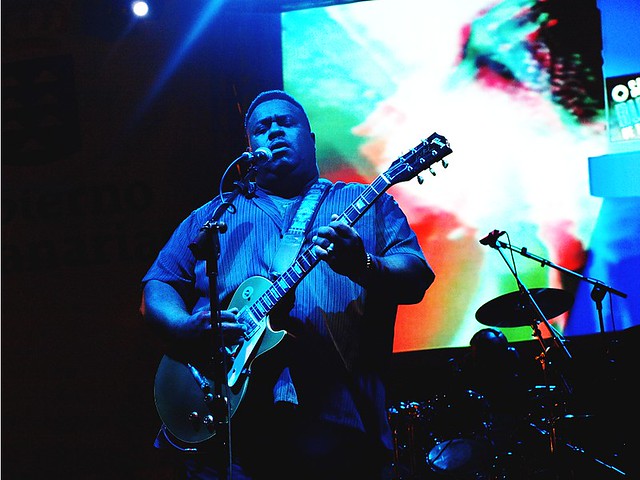 Santa Blues (Santa Cruz)
As always there’s no information about Santa Blues yet. This happens every year and then, not long before the date, details start to appear. It usually goes ahead and it’s always wonderful. Just annoying they never publicise in plenty of time.

Evita, the Musical (Santa Cruz, Auditorio de Tenerife, 4 to 7 July, tickets from €30)
It’s July rather than June, but as it’s early in the month it’s worth knowing now about Evita being performed at the Auditorium. Of course in this version you get ‘No llores por mi, Argentina’.

Artisan Market (Las Galletas, Rambla, 10am till Midnight, 13 June)
The main Rambla in Las Galletas is a nice spot for browsing through some unique hand crafted goods and local foods.

Ruta de la tapa, Ruta Dorada del Chicharro (Santa Cruz till 14 June)
Tapas route which includes a glass of Dorada and a tapa for €2.20 in Tenerife’s capital, Santa Cruz. Eating, drinking, exploring – it’s a good way to get to know the city. 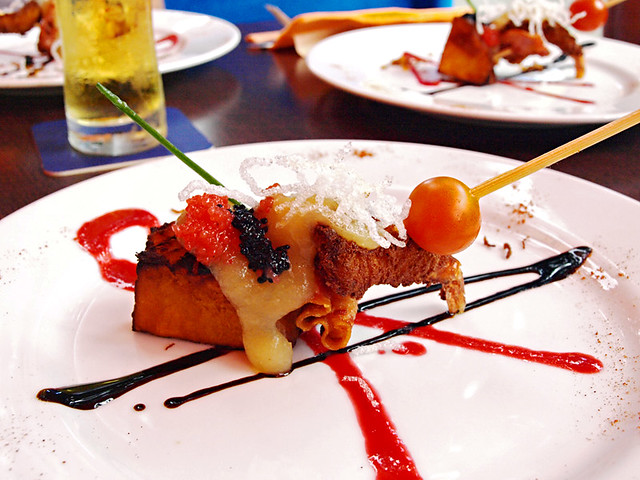 Dragon Battle Race (El Médano, 28 June)
The dramatically titled Dragon Battle Race sounds like it’s a cousin of the InfinityXtreme race held in Puerto de la Cruz each year – a cross between It’s a Knockout (for anyone who remembers that show) and an army assault course. If so, it should be good, messy fun.

De Tapas por Garachico (5-21 June)
Tenerife Tourist Board have this tapas route on their cultural agenda for June, Garachico council’s website doesn’t mention it. That doesn’t mean it isn’t going to happen, it probably means the council. Like so many others, are just slow to post publicity. If you’re in Garachico between 5 and 21 June look out for De Tapas posters.