Last week, 88 members of the BGTW (British Guild of Travel Writers) arrived on Tenerife for their AGM (Annual General Meeting). Travel writers, photographers, editors and broadcasters whose publications cover the gamut from guide books and glossy magazines to national press and the BBC, this was Tenerife’s opportunity to impress. 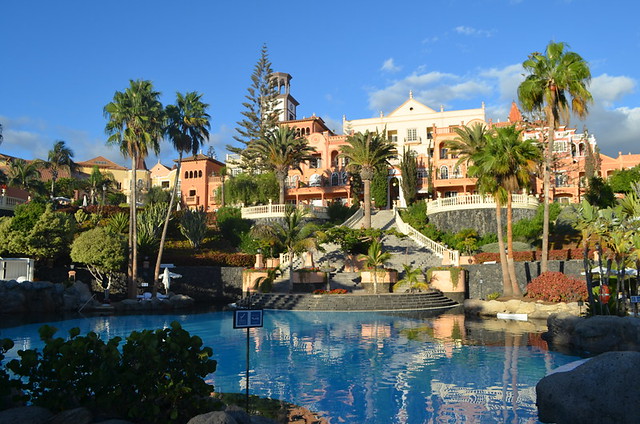 With sizeable hurdles of preconceived ideas and destination snobbery to clear, how did the island do?

The one factor you can never control is the one that makes the biggest difference to anyone arriving in Tenerife from a frosty UK, and that’s the weather. With the island currently experiencing its warmest January on record, blue skies and wall to wall sunshine provided the glorious backdrop to the event.
Tenerife was off to a flying start.

The principle underlying the organisation of every aspect of this visit, was one of showcasing everything that’s good about the island’s natural resources and its traditions. From its food and wine to its myriad landscapes, this was ‘operation Tenerife’. Other than the accommodation which had, through necessity, to focus on large resort hotels rather than small rural hotels which would have had members scattered all over the island and been a logistics nightmare doomed to failure, the event kept the focus entirely on local. On the plus side, the Bahia Del Duque, Iberostar Anthelia, the Sheraton, the Hotel Botanico and the Beatriz Atlantis all provided a suitably impressive experience of the island’s luxury developments, a sector that shows little sign of abating. 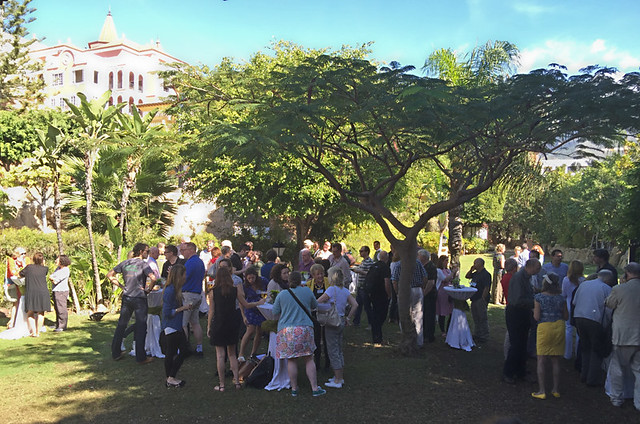 A taste of Tenerife
Dining venues during the three day event ranged from a banana plantation to the Beach Club at Bahia Del Duque, with the cable car station, the pine forest terrace of Hotel Villalba and the contemporary chic of TEA Museum in between. The food throughout the event was first class and focussed almost exclusively on local and traditional produce and dishes.

From tapa favourites such as croquetas, tortilla and churros de pescado; through barbecued meats and fish; fine seafood; traditional dishes like costillas con papa y piña de millo, bacalao encebollado, and the ubiquitous papas arrugadas con mojo; to delicious postres and excellent local wines, the Guild experienced the very best of the island’s gastronomy away from its Michelin starred restaurants.

Wow experiences
There are many things that Tenerife does well, and some things that simply cannot be duplicated anywhere else. The event managed to incorporate into its brief stay, some of the most WOW! experiences the island has to offer. 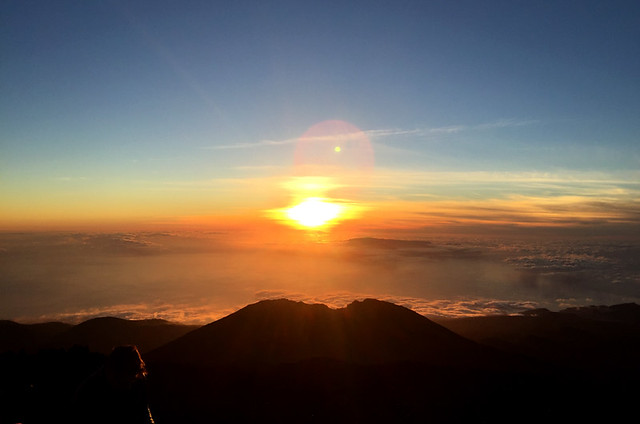 After a day of formal business spent in a conference room, delegates were treated to a sunset trip up Mount Teide followed by a stargazing session. The sunset duly obliged with a stunning display and while the moon clearly hadn’t got the memo about keeping a low profile so that the stars could dominate, it stole the show. Casting other worldly moon shadows over the landscape and shining so brightly we could clearly see its surface through the lens of a telescope, everyone returned to their hotels with an entirely different perspective of Tenerife and a retinal shadow that took ages to disappear. 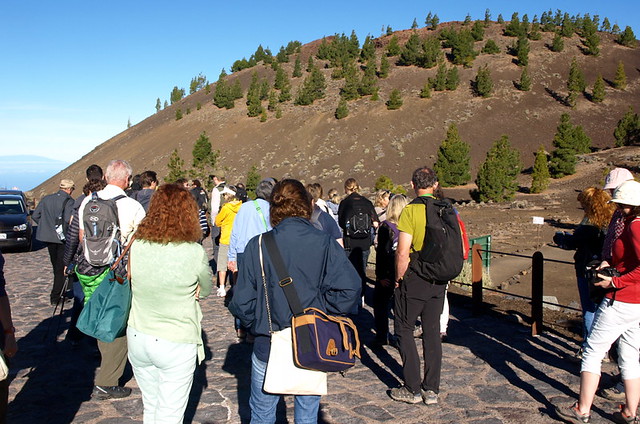 The following day, the formal business concluded, one half of the delegates returned to Teide National Park while the other half headed to Santa Cruz. Finding ourselves looking up at the spot from which we had watched the sunset and gazed down upon the crater the previous evening, our group headed off along the Samara Volcano trail to experience the unique landscape of the National Park’s youngest eruption. Once again, the weather obliged with excellent visibility and we were treated to wondrous views over three neighbouring islands.

The grand finale
Given how high the bar had been set with the sunset and stargazing tour, it was difficult to know how the organisers were going to impress with the venue for the Gala dinner that traditionally follows the AGM. But impress they did.

Dressed in their finery, delegates were taken to the Finca Del Lomo banana plantation in Guargacho where they walked through tunnels formed by gigantic banana palms, under-lit in shades of lilac and red to emphasise their size and beauty. Expecting to hear the trumpet of an elephant or the cry of a hyena at any moment, I have rarely seen so many saucer eyes in one place, my own included. 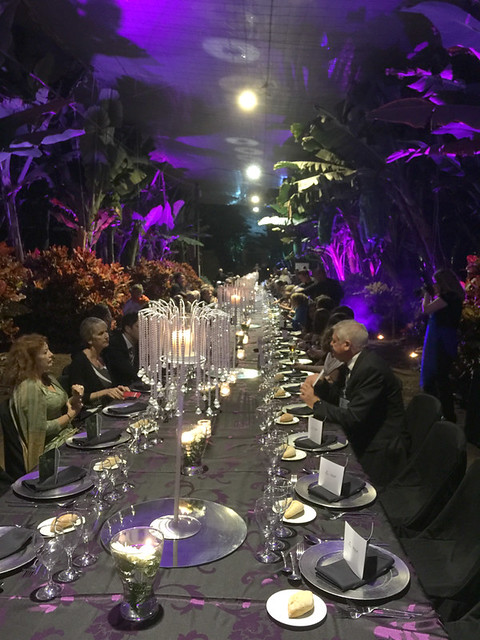 Moving from the welcoming cocktail, the Finca managed to wow Guild members even further when they arrived at their dinner table, the longest and loveliest table on Tenerife. Set like a scene from a fairytale, the glass chandelier centrepieces shone in the candlelight beneath a canopy of banana palms bathed in indigo. With the food every bit as impressive as the surroundings, it was the perfect end to a show stopping AGM.

To Tenerife and beyond
The following day some delegates left to return home while others went on to enjoy swimming with turtles or whale watching from a catamaran before heading to the north of the island to spend their last day experiencing a range of cultural and adventure activities.

From hiking the Las Vueltas path to Taganana; mountain biking; taking a gourmet food and wine tour; zip lining and even tandem paragliding, the social media airways were buzzing with BGTW members posting amazing images of their adrenalin packed day. 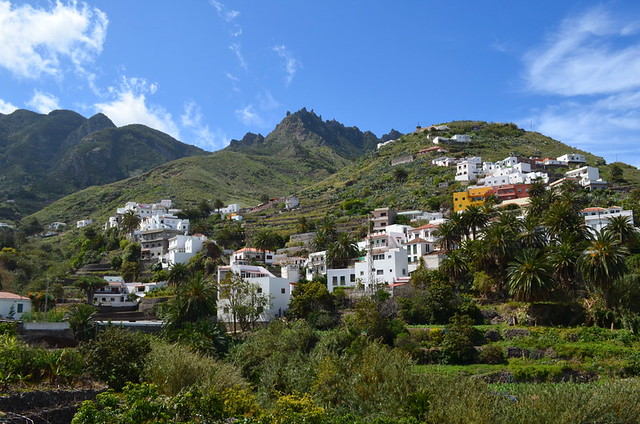 From young writers joining the Guild for the first time and never having set foot on Tenerife before, to venerated professionals whose bylines have appeared in the most prestigious pages for decades, the people I spoke to during the trip were, to a man and woman, blown away by their experiences and had been shown sides to Tenerife they never suspected existed.

Whatever the monetary value of the publicity this trip will bring in return for the investment made, and if the figures from the last time the island hosted the Guild six years ago are anything to go by it will be suitably impressive, 86 hugely influential individuals left this island yesterday with experiences, memories and images that stretch far beyond sun, sea and sangria.

Applause has to go to Tenerife Turismo and the island’s PR agency, Hume Whitehead, who worked with the BGTW secretariat to arrange a trip that showcased the very best of our unique and mightily impressive island. Now let’s watch the ripple effects…

Andrea (Andy) Montgomery is a freelance travel writer, guide book author and co-owner of Buzz Trips and The Real Tenerife series of travel websites. Co-author of The Real Tenerife and Walk This Way Tenerife; published in The Telegraph, The Independent, Wexas Traveller, Thomas Cook Travel Magazine, EasyJet Traveller Magazine, you can read her latest content on Google+