Gofio is an ingredient every Tinerfeño grows up with, yet many of the millions of visitors who pass through Tenerife are totally unaware of its existence. Every supermarket stocks packs of the stuff, but still it remains invisible.

We first became aware of gofio at our first romería when we found ourselves with lots of little packets of aluminium foil wrapped around a dense brown cake. Later we found out it was gofio amasado.
In some traditional towns we noticed a distinctive aroma wafting around certain streets. Later we discovered it was from mills where cereals, millet, corn and chickpeas were toasted before being ground into gofio. 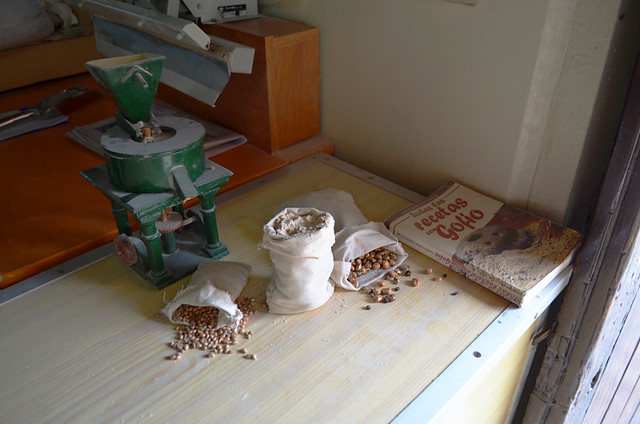 A visit to a gofio mill in La Orotava beefed up our knowledge of this local ingredient which pre-dates the conquest of the island.

Recently we made a return trip to the La Maquina Molino as part of the research for a travel article for Wizz Air. La Maquina is tucked away behind Casa Lercaro where it has been keeping locals stocked up with gofio since the time the same water from the hills was used to power a number of gofio mills in the town.

When we arrived, sacks of flour were being humphed up the small passage from a lorry parked on the perilously steep, cobbled street. We must have been in the mill for twenty minutes or so. The men were still carrying sacks to the mill when we left, such is the popularity of the stuff. 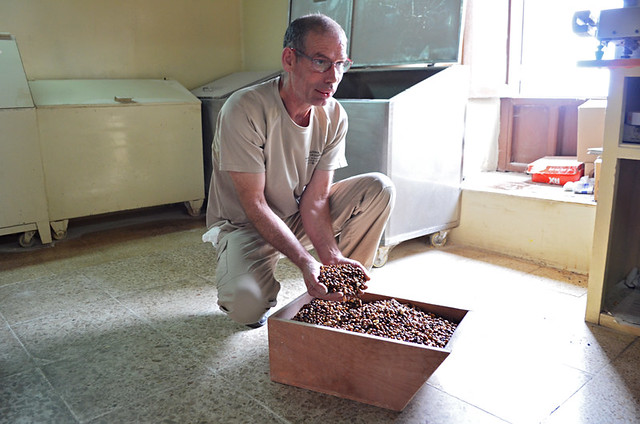 As well as getting quotes and information for the article, we were after some local ‘profile’ shots and had a specialist photographer from the UK with us who had Lolo, the amiable miller, in all sorts of positions much to the amusement of his sack carrying amigos. The funniest being when Tim, the photographer, was taking photographs of Lolo with his hands in a box of toasted grains. We couldn’t understand why Lolo’s expression seemed to be more grimace than smile until he dropped the grains with a small yelp explaining they were red hot, having just come out of the oven. Keeping your hands in hot grains whilst the photographer gets the right shot, that’s professionalism.

The tiny mill looks like it comes from a different age, but it had been updated since our last visit with some new products lining the dusty counter. One was gofio flavoured mojos, the other was gofio energy bars. 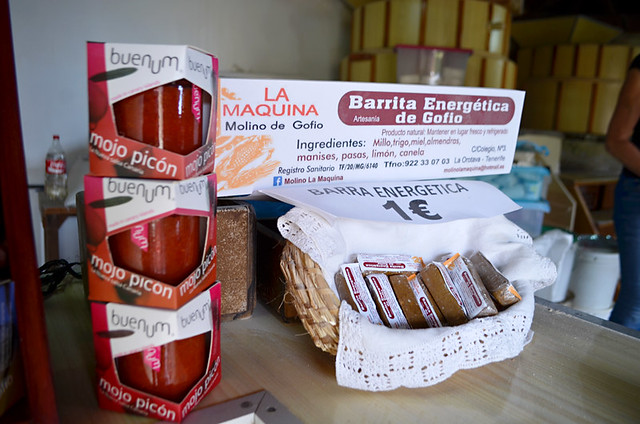 We already knew gofio is used for energy, usually mixed with milk, as it is said to release carbohydrates slowly into the body, keeping hunger at bay for hours and making it ideal for anyone working the land. The gofio energy bar was a variation on this, the new ‘old’ take on the cereal bars you can find on the shelves of any supermarket these days. La Maquina’s is a mix of millet and wheat gofio, honey, almonds, peanuts, raisins, cinnamon and lemon. At €1 a bar, we thought they were worth trying out and bought one each. Actually, we tried to buy but Lolo insisted we have them for free… even after we’d been responsible for burning his hands.

That’s typical of the people who run small family businesses on Tenerife and have a passion for what they do. We encounter this sort of spontaneous friendliness and generosity on a regular basis.

As for the bars, we’ve only eaten one so far. It’s a bit like gofio amasado but more flavoursome than most amasados we’ve tried. We shared a half each one energy-sapping hot morning when we were flagging. The result? Like Popeye eating a can of spinach.

Basically, gofio energy bars are the Tenerife equivalent of the Elven lembas bread in Lord of the Rings.

The Best Fiestas, Festivals and Events on Tenerife in January 2014

January on Tenerife is often a sunny month even though we think of it as the true start of winter with the nights becoming quite chilly for the next 6 or 7 weeks. […]