We discovered two things after deciding to eat at Tasca Matul on Saturday night.

The first was that getting from the Puerto de la Cruz side of the TF5 to the La Orotava side of it on foot is no easy task. (NOTE: Matul has changed address and is now in the centre of La Orotava).

The second is that there’s an increasing trend in restaurants, in the north of Tenerife at least, to take traditional Canarian menus and inject new and more sophisticated life into them; it’s a Canarian menu, Jim, but not as we know it.

We pass Tasca Matul in lower La Orotava at least once a week. It sits right next to the autopista just before the exit for Puerto de la Cruz (Botánico side). Their stylish sign had caught my eyes and a subsequent perusal of their facebook page was enough to suggest the restaurant was worth a try. 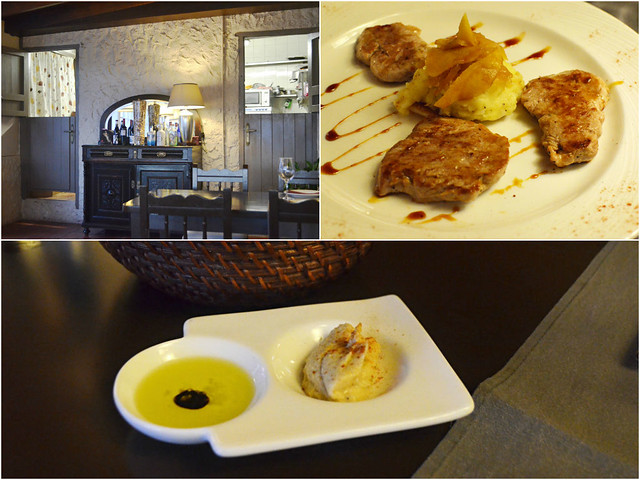 Although we live within easy walking distance, getting there on foot involved negotiating two autopista slip roads; one of which we had to walk up a section to reach the access road to the restaurant. In Britain it would seem madness. In Tenerife, where pavements outside of towns can be conspicuous by their absence, it’s no big deal. However, most diners do arrive by car or taxi.

The restaurant is inside an old stone cottage with a sloping, beamed wooden roof. It’s not unlike our own house, so we immediately felt at home. The décor, an attractive mix of traditional and contemporary, reflects the menu. It’s cosy and comfortable.

At 8.30pm we were the first diners to arrive.

“We’re too early,” Andy commented to the waiter.

“No,” he smiled. “Better. More time to enjoy yourself.”

It’s typical of the easy Canario way. Eating is an activity to be enjoyed at a slow pace.

The short walk on a hot summer night had left us thirsty, so a couple of cañas were ordered whilst we checked out the menu. 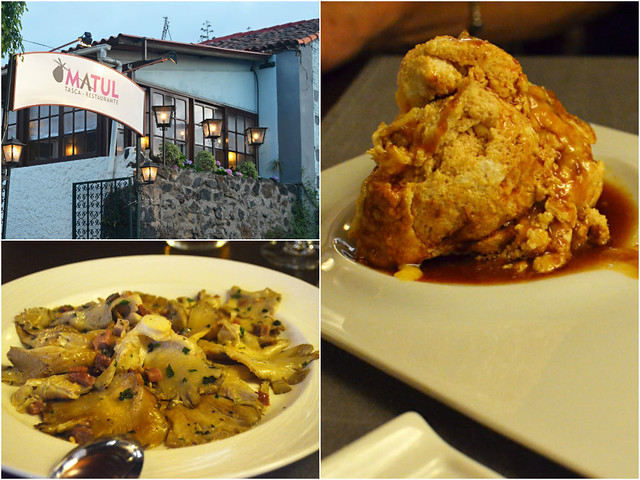 The Food at Tasca Matul
On the face of it, the menu looks not that much different from other restaurants in these parts; montaditos, fried octopus, tortilla, cod and pork fillets etc. But there are hints that things aren’t quite as they seem – tartar of salmon and avocado, cheese with foie, cod in romesco sauce.

It’s a small but, as they say, select menu. Translated that means I wanted to try most of the things on it.

We chose an ‘off the menu’ special, sautéed oyster mushrooms, to share between us followed by chicken in a Roquefort sauce with wild rice and pork fillets with potatoes and caramelized onions on grilled cheese. For the wine, we went for a bottle of Borujo, a smooth red from Arafo.

Whilst we waited for our food we nibbled on two types of hot bread that we dipped in a dollop of hummus or a small well of olive oil flavoured with rock salt and balsamic.

With no other diners to see to, it didn’t take the chef long to prepare the starter; a plate covered in sprawling mushrooms dotted with savoury ham cubes.

As we worked our way through the courses, more and more people arrived; mostly young, stylish couples (another trend we’ve noticed in places that stray slightly from the traditional path). 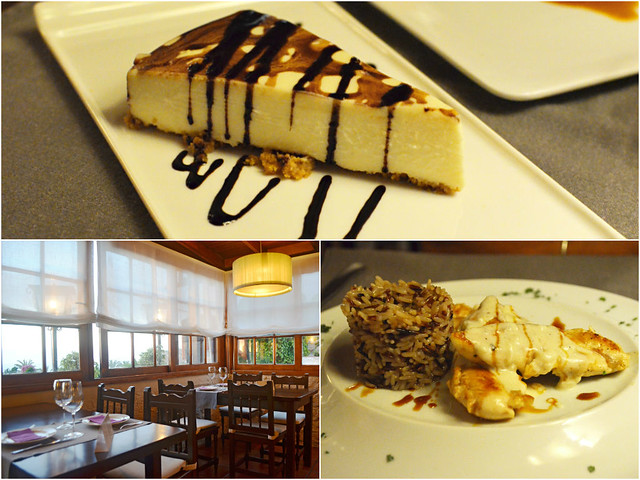 By 10pm, the restaurant had filled; the lively, friendly chatter boosting the atmosphere. One of the things I love about eating out in Spain is there’s no stuffy, ‘eating in a library’ type dining with Spanish diners. It’s the way good food should be enjoyed; enjoyed being the operative word.

All too soon the postre arrived (actually about and hour and a half after we’d arrived but time had flown). Andy’s sweet soufflé was an abuela special (there’s always got to be one of those) whereas mine was bang up to date; a white chocolate tart and one of the best desserts I’ve stuck in my mouth in a long time (and there have been some crackers this year).

Basically, Tasca Matul ticked all the right boxes. Friendly, professional and with an easy ambience in which to enjoy creatively presented fresh, imaginative dishes with bags of flavour.

It’s the sort of food that would please both traditionalists looking for something familiar as well as people with a more adventurous palate wanting to try something new.

Definitely worth navigating two slip roads to get to.

The Best Fiestas, Festivals and Events on Tenerife in September 2015