*Island Walks Offer – ALL FOUR TOWN & CITY ROUTES for only €8*

Detailed walking routes – discover Tenerife on foot with Town & City Walks which you can download as soon as you make a purchase. 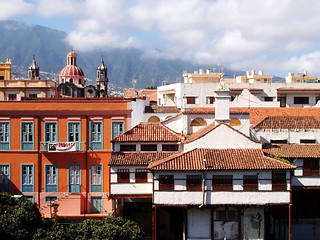 From the lush gardens of Puerto de la Cruz and the elegant courtyards of La Orotava to the perfectly preserved streets of old La Laguna and the artistic parks and pretty plazas of Santa Cruz, our Tenerife town and city walking routes meander through the most atmospheric, interesting and picturesque areas of Tenerife’s historic towns (see more details below).

Town & City routes include main and lesser known attractions, city and town highlights, parks, restaurants and cafe recommendations as well as lots of local snippets, many of which you won’t find in other guidebooks (unless they’ve found out about them from us).

Many people might not have the time to stroll the old streets of all four Tenerife historic centres included in our Tenerife Town & Cities Walks. To provide greater choice we’ve now created two sets of town and city routes; one which is more easily accessed from the south of the island and one which is convenient for people staying in and around Puerto de la Cruz in the north. 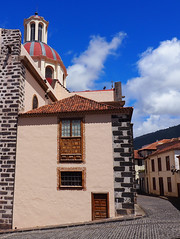 whose links can be traced back to the conquest of the island. La Orotava is, in our view, one of the prettiest towns on Tenerife; a place where we always find something new to photograph every time we visit. Puerto de la Cruz mixes tourism with tradition. There is much to discover hidden away in the streets of the older part of town formerly known as the Port of Orotava. See below for more details on each of these historic towns.

Tenerife Northern Town & City Guides:- The Orotava Valley. Discover the most interesting parts of La Orotava and Puerto de la Cruz for only €5. 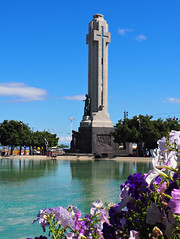 attractions of Tenerife’s former and current capitals. The streets of La Laguna old town are so perfectly preserved it has UNESCO World Heritage Site status. Set out in what was at the time a groundbreaking grid format, there are secrets behind many colonial doorways. On the face of it Santa Cruz seems more of a modern city, yet there are many historic areas to wander, as long as you know where to look. It also has one of the nicest parks we’ve seen anywhere. See below for more details about our walking routes through both of these small cities.

Tenerife Capitals Town & City Guides:- The Metropolis. Discover the most beguiling parts of La Laguna and Santa Cruz for only €5. 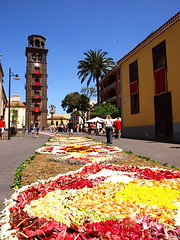 Town & City Guides:- La Laguna – UNESCO World Heritage Site. The old quarter of Tenerife’s former capital and one of the two UNESCO World Heritage Sites on the island bizarrely remains off the excursion agenda for most of the visitors to the island. Although nearly every Victorian adventurer who came to the island visited Tenerife, there are actually less places to stay now than there were in the mid 19th century. It’s a perfectly preserved old city whose diverse architecture owes a lot to the mix of nationalities who settled here following the conquest. It’s fascinating to stroll around this historic city which has a personality that owes much to an artistic bent combined with a religious heritage, not always a compatible mix.
Where: North Tenerife; Time: The route would only take about an hour to walk without any stops. However, add in up to six hours worth of sightseeing that includes museums, parks, plazas, exhibitions, churches, markets and an eclectic mix of old buildings with hidded courtyards and there’s a lot to pack in. Once you throw in some of the most atmospheric tapas bars and cafés you’ll find on Tenerife plus uniquely independent shops and the chances are you’ll want to do this route more than once. 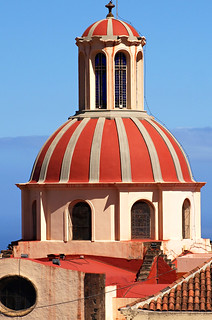 Town & City Guides:- La Orotava, Tenerife’s Noble Town. The first time we visited La Orotava many years ago, we missed a lot of the best bits. With this route around the most beautiful and interesting streets in La Orotava you won’t suffer the same fate. Our town walk is more than simple directions, it is also a detailed guide to the old town and includes places most visitors overlook as well as the main highlights. The guide also includes restaurant/café recommendations (researched thoroughly and enthusiastically) as well as snippets of information you won’t find in other guides. We love walking this route and are sure you will too.
Where: North Tenerife; Time: The route would only take about half an hour to walk, but there are so many interesting things to see and courtyards to explore that there is at least four hours worth of activities and browsing involved. Allow at least half a day and more if you want to enjoy some local tapas bars. Town & City Guides:- Santa Cruz, the Friendly Capital City. With our City Centre and City Highlights routes visitors to Santa Cruz no longer need to spend valuable hours searching for the city’s top spots. Our detailed routes include the most popular attractions, parks, plazas, museums, art galleries, restaurants, bars, shopping areas and even toilet stops. Our unique info guide to the main attractions means that you can even customise your route to suit your preferences adding up to 5.5 hours of activities to your visit to Santa Cruz . If you want to see the best of the city, this is the essential walking guide to Santa Cruz. (IDEAL FOR VISITORS ARRIVING ON CRUISES)
Where: North East Tenerife; Time: City Highlights route is 1 hour 32 minutes & the City Centre Route is 56 minutes. Town & City Guides:- Puerto de la Cruz, Tenerife’s Cultured Resort. These Tenerife routes focus on Puerto de la Cruz, the resort which mixes having a strong Canarian personality with being a tourist resort. Our two detailed routes include the historic buildings, garden, plazas, museums, restaurants and refreshment stops. Our unique info guide provides extra information about the most interesting sights you’ll discover en route, with suggestions on how long you’ll need to spend at some of the attractions to get the best out of them. If you want to get to know Puerto de la Cruz better, this is the essential walking guide to Puerto de la Cruz.
Where: North Tenerife; Time: Exploring the Town route is 1 hour 17 minutes & the Garden Route is 1 to 2 hours with up to 5 hours of garden strolling.

A Captivating Coastline – FREE with any purchase Some parts of Tenerife’s coastline are simply breathtaking in their beauty and many coastal paths are accessible for most people. From hidden coves and lush palm groves to cobbled paths and grand old mansions; rock pools and cyan seas to dramatic cliff top paths, our ‘A Captivating Coastline’ guide includes our top five favourite coastal walks on Tenerife.
We will send you a complimentary copy of A Captivating Coastline following any purchase of Town & City Guides, Island Walks, or Real Tenerife Island Drives.

If you enjoy reading about our walks and want to discover the beauty of Tenerife for yourself, you’ll find Town & City Walks invaluable.

In order to view and print your single route PDF itinerary you need Adobe Acrobat Reader software. If you don’t already have Adobe Acrobat installed on your PC, click the image for your FREE download.