The last time we ate at El Maná, in the Ranilla district of Puerto de la Cruz, we worked our way through a delicious and creative taster menu. The only reason we hadn’t been back was that there are just so many good restaurants between Puerto de la Cruz and Santa Cruz to try that we simply hadn’t managed to fit in a return visit.

A visit to Puerto by four friends, three of whom didn’t eat meat, pushed this stylish vegetarian restaurant to the top of the list, especially as El Maná had changed hands and menus since our last visit and we were curious to see if the food was still manna from heaven.

The décor in the restaurant is as bright and colourful as the freshly squeezed fruit juice and smoothies which feature on El Maná’s drinks menu. It’s stylish and fun, unlike some of the clientèle that night who were already well through their meals when we arrived. 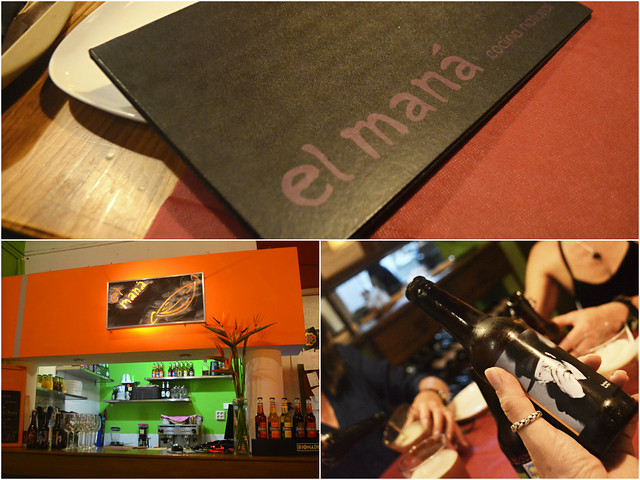 Two of our friends were of the ‘eat dinner so early it’s late afternoon’ variety so we had to compromise and book a table ‘early doors’, not long after the restaurant had opened. This meant it was way before the lively, chatty local Canarian population ate. Subsequently the restaurant was populated by some very serious people who’d clearly taken a vow of silence. As we subscribe to the Spanish way of eating (i.e. it’s a fun and sociable activity), it wasn’t long before our chatter and laughter drew a few narrow-eyed glances. We ignored them; when in Rome my quiet friends…

Sombre diners aside the restaurant itself was warm, friendly and small enough to feel cosily intimate.

The Food at El Maná
Even when we didn’t eat meat, we hated it when we were dished up the blandly boring and, frankly, too healthy looking food that many people who aren’t vegetarian visualise when they hear the word ‘vegetarian’. One look at El Maná’s menu and it was instantly obvious that it was our sort of vegetarian restaurant – creative and yummy sounding food that gets the juices flowing whatever your culinary persuasion. The first item on the menu was goats’ cheese nests with honey and thyme. By the second, hummus with mojo verde and toasted bread, I knew I wasn’t going to be able to make a decision any time soon.

The tactic in this case is to order drinks to buy some extra pondering time. 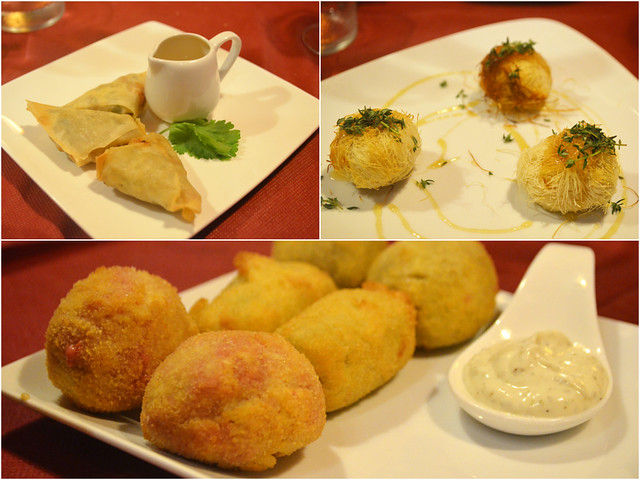 Thankfully the menu at El Maná is quite select and, as there were six of us, we were able to order quite a sizeable percentage of the delectable sounding dishes and beers on offer.

So the cheesy nests were joined by a mix of home-made croquettes (leek, beetroot and mushroom) and a plate of samosas with mango and chilli sauce to start.

The second round included freshly made pastas (with sauces such as roasted pumpkin and leek with thyme and shavings of aged cheese) and stir fried seasonal vegetables; one in a Thai coconut curry sauce, the other with cumin-dusted potatoes.

The seasonal vegetable options veered closely to the type of vegetarian dishes that don’t really do it for me. But all others I would have ordered and eaten happily in any restaurant – with or without a vegetarian tag. 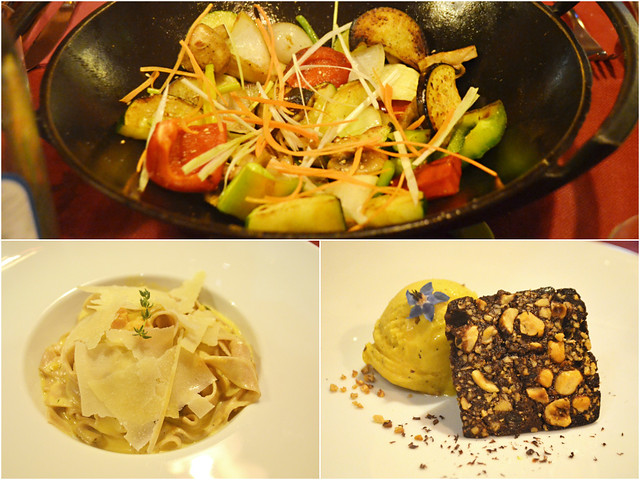 By the time we reached the dessert stage, the serious early diners had been replaced by people who actually spoke to each other, so our incessant chattering fitted in with everyone else’s.

The dessert menu is one of those that has you searching for a wee bit of extra space in an already too full stomach. The likes of home-made ice creams, hazelnut brownie with banana-passion fruit sorbet, and molten chocolate cake with vanilla ice cream show no mercy when it comes to twisting your arm to squeeze a little bit more in. So we did, resulting in groans that were three parts pleasure, one part pain.

In the end El Maná was the perfect choice for a group of people that consisted of mainly non-meat eaters but which included people who do devour meat (us two) but enjoy anything that’s tasty, creative and made with care.

Note: El Maná labels what dishes are suitable for vegans and which have gluten free options. They’ll also adapt food for other food intolerances where they can.