Way back in early July (where has this year gone?!), something extraordinary happened. We went for a very special meal and I did not take a single note of what we ate.

In my defence, it was my birthday and this was my birthday weekend, and I didn’t want it to bear any resemblance to work. In that respect, it was a deliberate act. Besides, I had never eaten Japanese before and quite frankly, didn’t have a clue what was being placed in front of me. Research plus scrutiny of the photos we took have led to this review. I simply cannot let such a pleasurable Tenerife dining experience go by without mentioning it. Apologies in advance for the errors I am almost guaranteed to have made. 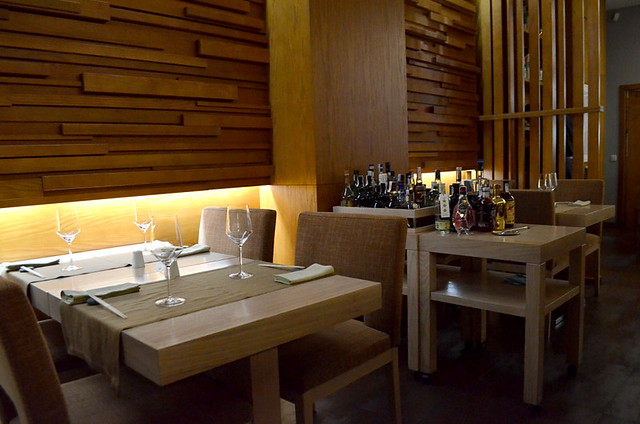 Located off Plaza España in Santa Cruz de Tenerife, Kazan first came onto our radar when it was awarded a Michelin star in 2015. We’ve been ‘meaning’ to go ever since and my birthday weekend at The Mencey provided the perfect excuse.

As you might expect for a Japanese restaurant, Kazan’s décor is understated. Walls, tables, chairs and counters are all in wood, Simple. Elegant. Calm. There are sliding screen doors to further dining rooms and an open plan cooking area. The noise level is minimal and at first, I feared it might be like eating in a library. But you can always rely on the Spanish and Canarios to add volume to an experience, and as the tables filled, the buzz created a relaxed and informal atmosphere.

The food at Kazan
Faced with a menu which meant very little to us, when the waiter suggested we allow the chef to prepare a selection of dishes for us, we jumped at the opportunity. Opting for the degustación menu is something we frequently do in good restaurants, it allows us to sample a far wider variety of dishes and gives the chef freedom to use seasonal delicacies. 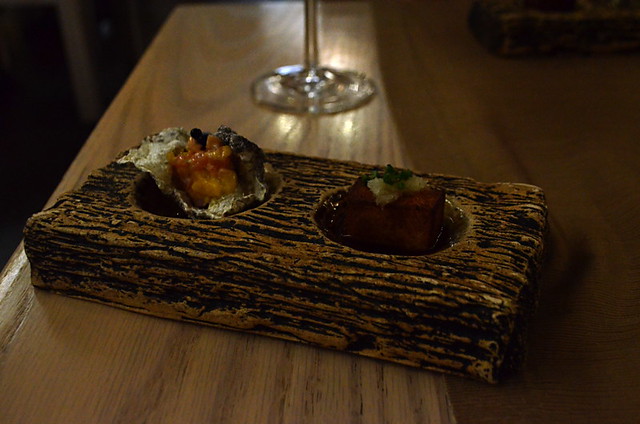 Our amuse boûche opening salve set the tone for the entire meal. Two, bite-sized dishes served in a block of wood. One was crispy tofu and the other was a tempura of some kind. The delicate balance of multiple flavours combined in such a small parcel and presented so elegantly reminded me of sampling a Ferran Adriá hors d’oeuvre many years ago. Sublime. 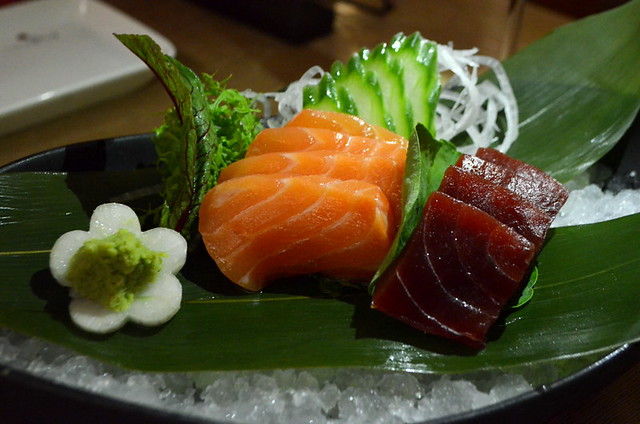 First of our taster courses was a Sashimi of red tuna and salmon served with wasabi and soy sauce for dipping. Once again, the freshness and tastiness of the fish combined with the wasabi and soy sauce was delicious, and the presentation on leaves over ice was perfect. 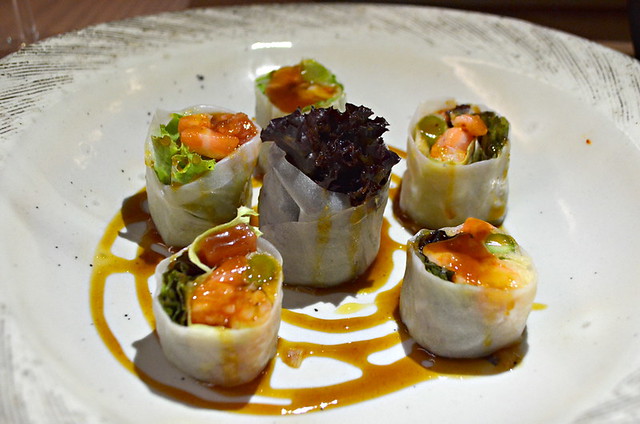 Now into our stride, we embarked on the plate of mixed sushi rolls with barely disguised relish. I couldn’t tell you if they were Futomaki or Hosomaki Rolls, or something else entirely, I can only tell you they were heavenly. 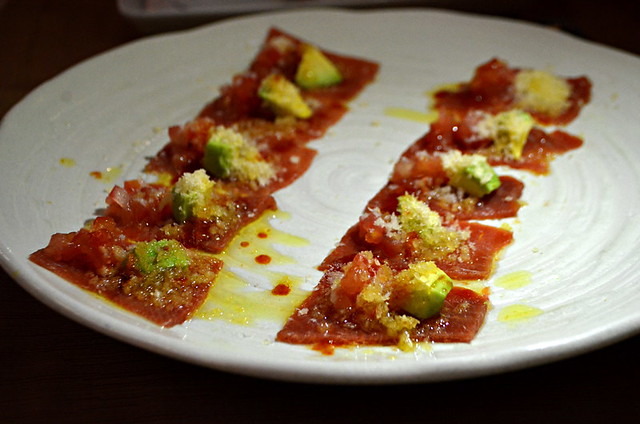 My favourite dish of the evening was the Usuzukuri which followed next. Picking it up with chop sticks without losing a single element of its perfection was a challenge but the combination of flavours was superb. 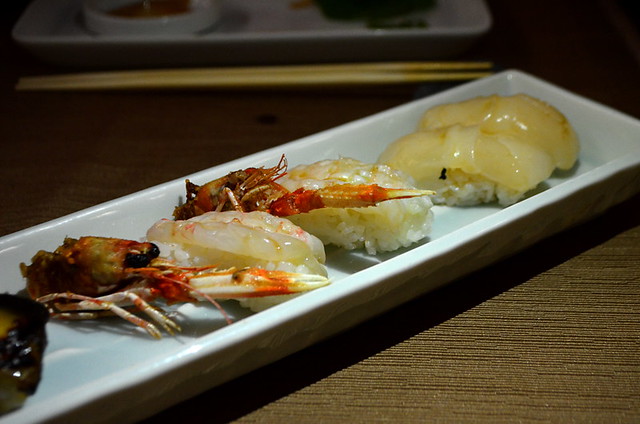 Next up was a selection of seafood sushi which was probably my least favourite dish simply because I’m not a fan of cold rice. But that’s just me. Suffice to say, as sushi goes, this was the Rolls Royce version. 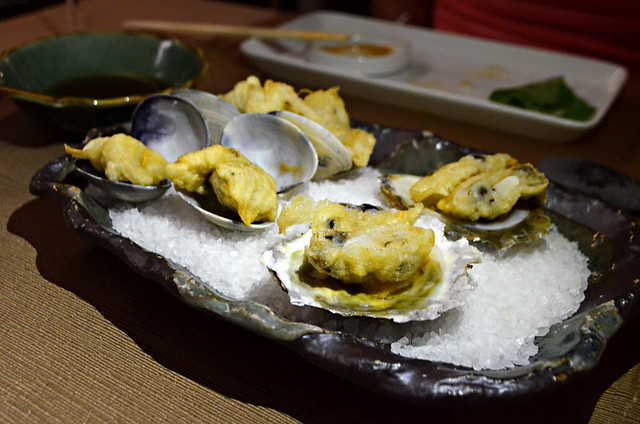 At the other end of my scale is seafood tempura which I could eat every day of the week, especially if it was always this light, crispy and moist with a surfeit of flavour. 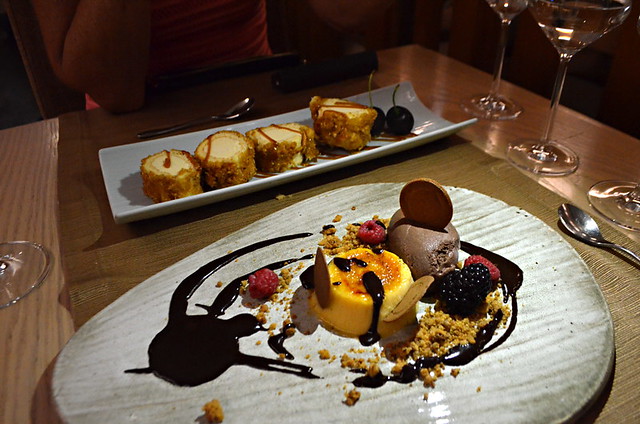 At that stage, we really should have called it quits and finished, our appetites sated with an elegant sufficiency. Not us. Unlike the Japanese, we like to take satisfaction up another notch and decided to order not one, but two, desserts. The waiter raised a barely perceptible eyebrow and brought two fabulous dishes, each large enough to have shared. I’m afraid I couldn’t tell you what they were, just that they were lip-smackingly good.

Andrea (Andy) Montgomery is a freelance travel writer and co-owner of Buzz Trips and The Real Tenerife series of travel websites. Published in The Telegraph, The Independent, DK Guides, Wexas Traveller, Thomas Cook Travel Magazine, EasyJet Traveller Magazine, you can read her latest content on Google+