Overall
Before the new kids on the block came along, when I thought of a luxury hotel on Tenerife it was an image of the Gran Hotel Bahía Del Duque in Costa Adeje that popped into my mind. It is the the complete opposite of the bland, apartment block hotels I associated with popular holiday resorts.  Sitting behind one of the most attractive beaches on Tenerife the Bahia del Duque looks like a cross between Disneyland and Portmeirion. This is where the ‘upmarket’ revolution on Tenerife began. 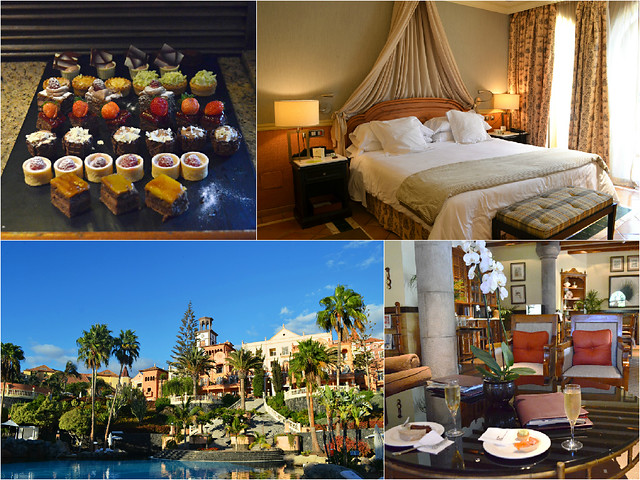 Where is the Gran Hotel Bahía Del Duque?
The Gran Hotel Bahía Del Duque is like a small town at the western end of Costa Adeje in the exclusive area of El Duque where it’s surrounded by other 5 star hotels. However, with its pastel coloured spires and towers, the Bahía Del Duque stands out from the rest. Directly in front of the hotel is Playa del Duque, a peach of a beach with pale sand, turquoise water, beach restaurants and an attractive rock jutting out into the sea, cutting out the rest of Costa Adeje.
Within a few minutes from the hotel are upmarket restaurants and the super chic shopping centre of Plaza del Duque.
Prices in the area are unsurprisingly higher than in just about any other area of Tenerife. But the more budget friendly area of Fañabe, where there is a greater selection of restaurants and bars, is just a short stroll away. 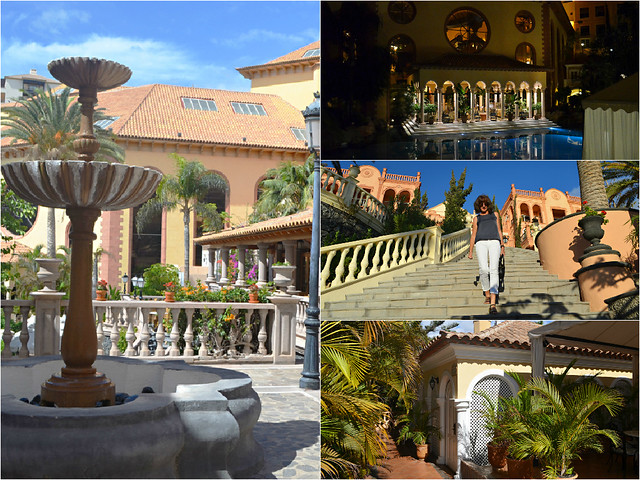 What is the Gran Hotel Bahía Del Duque like?
The Gran Hotel Bahía Del Duque is like a small, exclusive and very eclectic town. From the moment you arrive, greeted by a doorman in traditional Canarian costume, the first standout sight is a Louvre type glass pyramid in the car park.
Once inside, the colonial foyer is split into numerous levels so that the space is broken up into smaller, more intimate areas with a selection of bars whose terraces overlook what could be an immaculate Mexican pueblo. It’s bright, airy and feels like being outside and in at the same time. Whilst we waited for our room to be ready we were given a complimentary glass of cava and moreish snacks.

The grounds are also on various levels, which can be confusing until you get a feel for the lay of the land. The first time we visited we struggled to find our way from reception to beach level. These levels also create the feeling of smaller, more personal spaces. The design is lively and eye-catching, meant to reflect some of the personality of traditional Canarian architecture – the mock Torre de la Concepción being the obvious. There are touches of trad Canarian styles all over; a bench underneath a painting of the Virgen del Candelaria in a shady alcove, a trickling stone fountain in a small, cobbled plaza. Overall, the feel is of a modern take on colonial styles with a touch of the Caribbean thrown in courtesy of the beach bar and restaurant on stilts on the edge of one of the swimming pools. The mix of elegant casualness alongside the classic prevents any feeling of stuffiness. 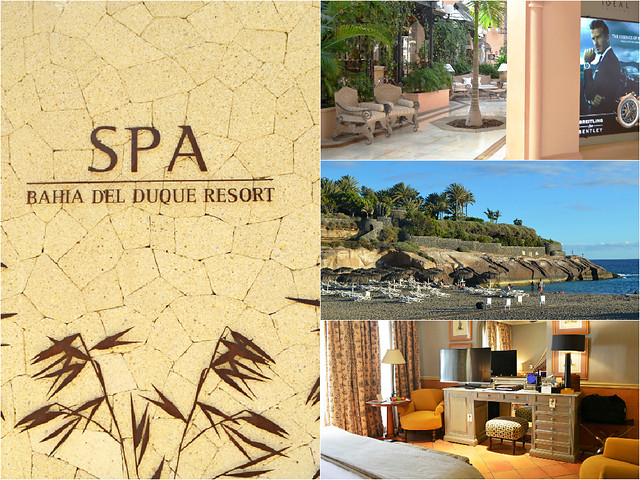 As for the facilities, there are loads – a fully enclosed spa (got a look, didn’t get to try it out) tennis courts, boat trips, pools with Hollywood star looks, an observatory for stargazers, Balinese beds on the lawn and special clubs aimed at children up to 12 as well as teenagers (lounge with video games, table football etc.). Even a walk around the grounds serves as a stroll through mini botanical gardens. Basically, nobody should get bored.
There is after dark entertainment around the pool. We briefly watched a fashion parade and a standard hotel cabaret type act, but preferred to spend time in our room. Then next section should explain why.

What are the Bedrooms Like?
We stayed in Los Sauces, one of the Casas Ducales which have their own reception and lounge area. Again the style is attractively colonial, maybe more Caribbean than Canarian, with a large, half canopy bed (wonderful pillows, so no need for the pillow menu), quasi-distressed wood furnishings contrasted with contemporary touches (flat screen TV, speakers for iPhone, good free WiFi). The mini bar was as well stocked a mini bar as I’ve seen and I was impressed with a ‘customised’ drawer full of goodies (gin, whisky, vodka, chocolate). In fact there were loads of things to snack in the room (fruit, jars of sweets). The spirits were around €5 which didn’t seem to high for a luxury hotel. Similarly, to dine in the room would have cost around €21 for a main course; not dissimilar from the restaurants outside the hotel.
The bathroom had a double sink and a massive walk in shower with a glass wall which opened up views of the bedroom, or the other way around (there are shutters for those who prefer discreet showering).
The room had a balcony large enough for two sun loungers and a small table and chairs. It overlooked the garden area and, after dark, it was simply just a nice place to sit with a bottle of wine, listening to the sounds from the resorts nearby and gazing at the stars. 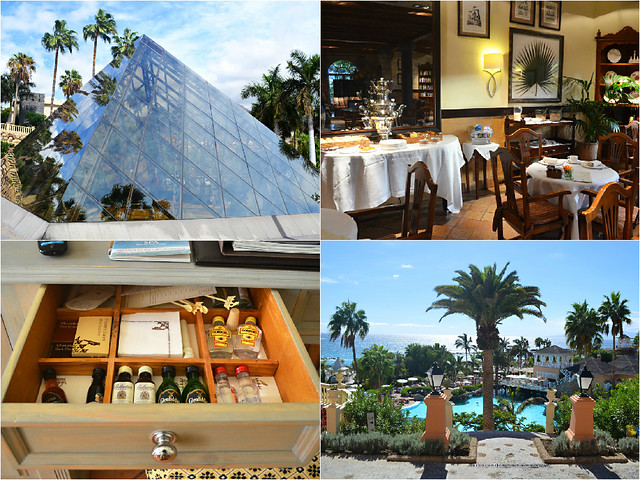 How Good is the Food?
The hotel has around eighteen various bars/restaurants/cafés. Restaurants include traditional Canarian cuisine, Italian, Asian and French. Whilst for snacks and drinks there are beach bars, a burger bar, zumería (fresh juices) and piano bar. Once again, there’s a lot of choice. Prices in some are surprising given the hotel’s status. For example, salmon tagliatelle in La Brasserie was €12.70.
I can’t say how good the food is. Apart from breakfast and some lovely little montaditos and tiny tarts, we ate out.

We had breakfast on the small, leafy courtyard at the Casas Ducales’ lounge. The buffet there has a small, but diverse, selection of cereals, fruit, meats, pastries and cheese. Hot breakfasts are cooked to order. Ours was slightly disappointing, the bacon overcooked and brittle. We heard the main restaurant, El Bernegal, was better. 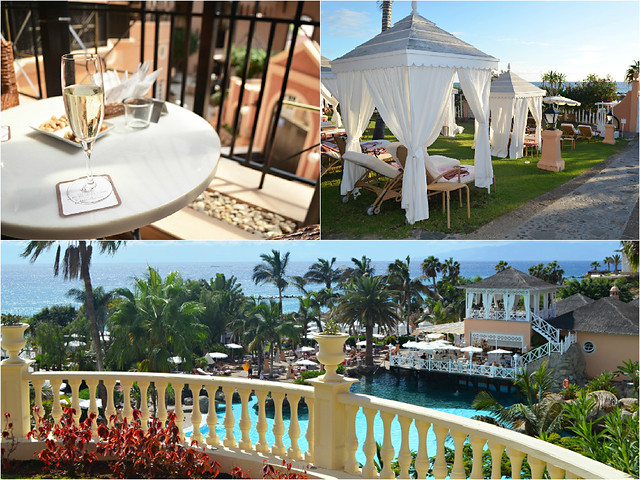 What is the Best Thing About Gran Hotel Bahía Del Duque?
I would say range of choice and its looks. It’s an interesting hotel to wander around, it really is like exploring a small town. There is loads to see, do and eat. To me it feels more tropical than other Tenerife hotels and, at times, it was easy to believe I was in the Caribbean rather than the Canary Islands.

How much is it?
Double rooms are from €224 a night (breakfast included) in low season and from €399 in peak season. There are more luxurious and more expensive options available – for example the villas, often featured in the likes of Condé Nast.

Who Would it Suit Best?
Just about anyone, except people who prefer small hotels. Families and couples of all ages should revel in its multi-layered luxury.

It’s the hotel that set the bar for other luxury hotels on Tenerife.