Ever since I had my head blown off in Krabi by foolishly plunging into a bowl of nam prik without testing the water, I’ve had a love of Thai food. If I was forced to pick my favourite world cuisine, Thai would be up there in the running.

I love the diversity; the perfumed elegance of some of the dishes and how some curries can be spicy but you can still taste the individual flavours. 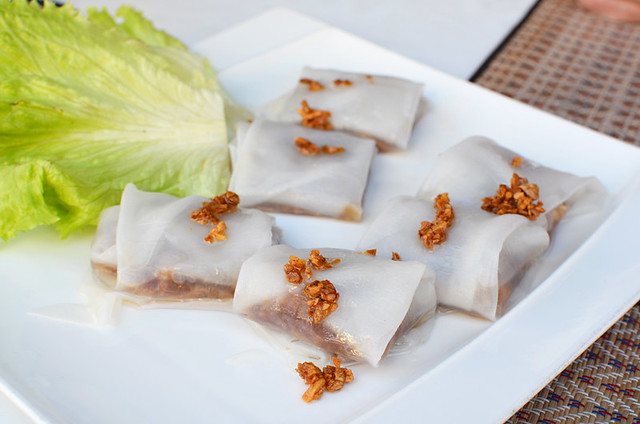 In over ten years on Tenerife we’d eaten Thai only twice. Part of that was because most of the time we eat at Canarian/Spanish restaurants. But part of it was because we enjoy Thai food so much and on one of those two times, the food was such a massive disappointment that it put us off Thai restaurants on Tenerife. Basically it had been Chinese masquerading as Thai.

The experience meant we had avoided Sawadee Ka in Puerto de la Cruz despite the authentic name and having to pass it every time we visited the post office.
But on a sunny December day when we couldn’t decide where to have lunch, we decided to give it a chance.

Décor wise, Sawadee Ka isn’t what you’d call inspirational. The signs of what the ‘local’ used to be before are still evident even though it’s been Sawadee Ka for years. But there was a photo of Thai royalty over the bar area which suggested at least the people who owned it were actually Thai. 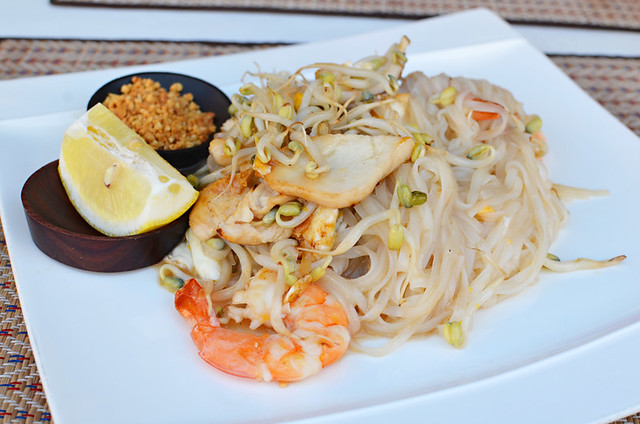 Service was equally as austere; within moments an unsmiling waitress handed us the menu.

Neither signs were promising and we wondered if we’d made a mistake.

The Food at Sawadee Ka
Things started to brighten up when we saw the menu included some Thai favourites. The waitress thawed when we asked her about various dishes, possibly a smile may even have flickered across her face at one point, but I couldn’t swear to it.

It didn’t take us long to choose what we wanted: tod man pla (Thai fish cakes) and Khao Kriap Pak Maw (steamed Thai won ton) followed by crispy duck with chilli and basil and Phad Thai Gai Goong (fried noodles with chicken and prawns). I’ve written the Thai names purely because I just love the way they sound as I roll them around my head. 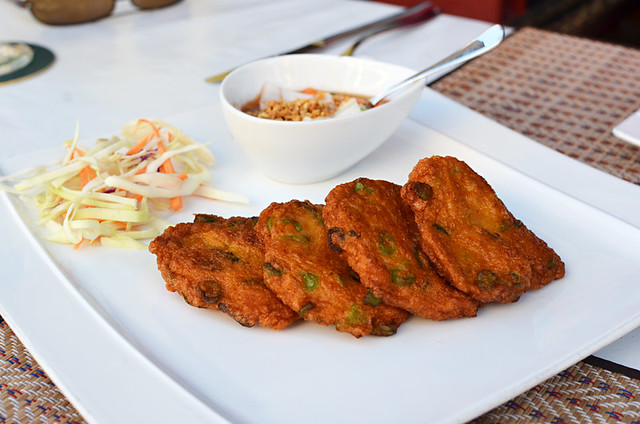 It took ages for the starters to arrive. But we weren’t bothered. We had bottles of beer, the sun was shining, we were in no hurry and the fact that it took a while to prepare suggested dishes were being prepared from scratch.

When the fish cakes arrived, they certainly looked the part. But the first bite would reveal all.

They were simply aromatic Thai fish cakes and wonderful. The steamed won ton was a revelation; delicate in appearance and an unusual and addictive flavour  – a sweet savoury combination of ground peanuts, pork, palm sugar and garlic in a rice flower dumpling wrapping.

Any thoughts we were going to be palmed off with faux Thai again evaporated as quickly as those fish cakes. 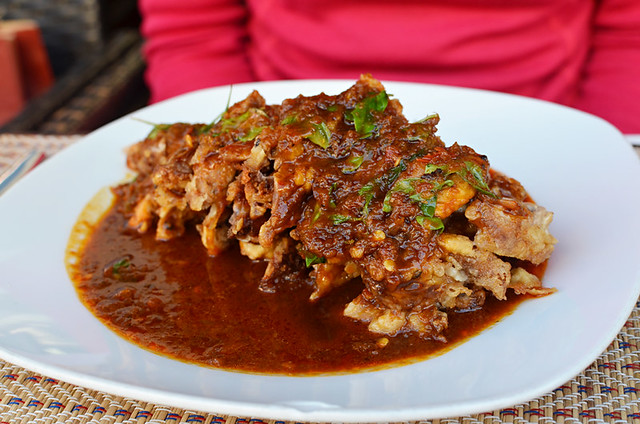 The main courses kept up the good work. My fried noodles were bursting with those distinctive Thai flavours whereas Andy’s duck, too much for one person and tender and tasty in itself, was elevated by the addition of the chilli and basil.

The décor might not have been aesthetically pleasing and the waitress wasn’t going to win any personality awards but the food made up for all of that – it was something we hadn’t experienced for a long time, excellent Thai cuisine.

And we were gutted. Gutted that for years we’d denied ourselves good Thai food because of a bad experience elsewhere.