The Spanish newspaper Diario de Avisos was responsible for quite a bit of chin pulling in our house the other night. Even lubricating our minds with a smooth red Bodega Monje tradiciónal didn’t get the cogs turning smoothly. Trying to decide what we thought were the 10 most beautiful places on Tenerife was a harder task than we thought it would be. There are too many beauty spots on the island. 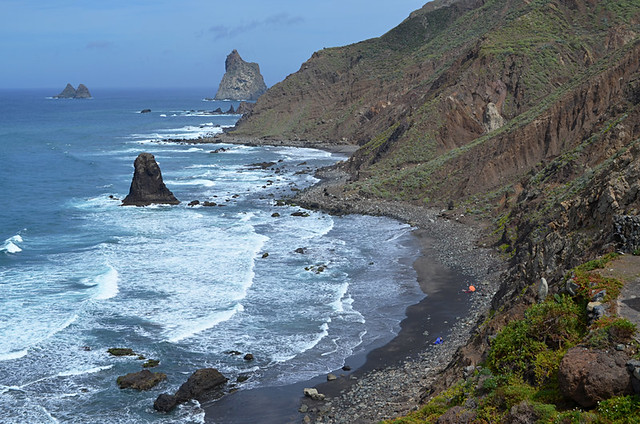 The paper had published a guide to Tenerife which included author José Manuel Moreno’s pick of the 10 most beautiful places on Tenerife. These were Playa Benijo in Anaga; Paisaje Lunar; The cliffs and lighthouse at Punto de Teno; Teno Alto; laurisilva forest at Monte de Agua in Teno (he clearly has a thing about Teno); the cliffs at El Sauzal; Montaña Guajara; Teide crater; Montaña Amarilla in Costa del Silencio; and La Caleta de Adeje. The last is the coastline rather than the fishing village with the same name.

It’s an interesting selection. But not one we’d necessarily agree with. It looks as though places have been picked which have geological interest whereas we simply opt for aesthetically pleasing, which means man-made places also get a look in.

With that in mind, this is our pick of the 10 most beautiful places on Tenerife, in no particular order. 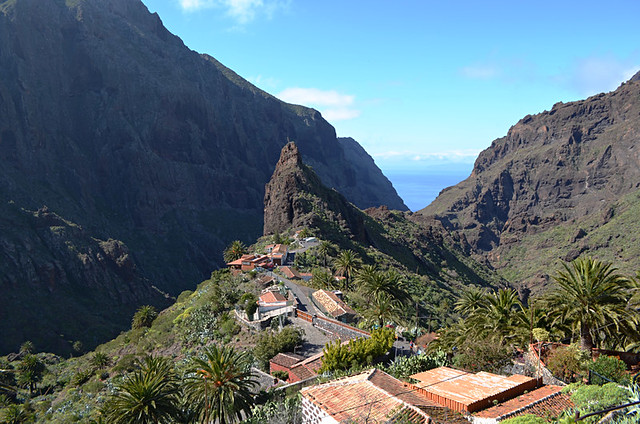 There’s a reason José Manuel Moreno included more than one location in Teno, it is one of the most surprisingly stunning areas of the Canary Islands let alone Tenerife. Masca is one of those places which just blows people away the first time they see it… and the second… and the third…
Getting there adds to the adventure, although it’s a drive not appreciated by everyone. 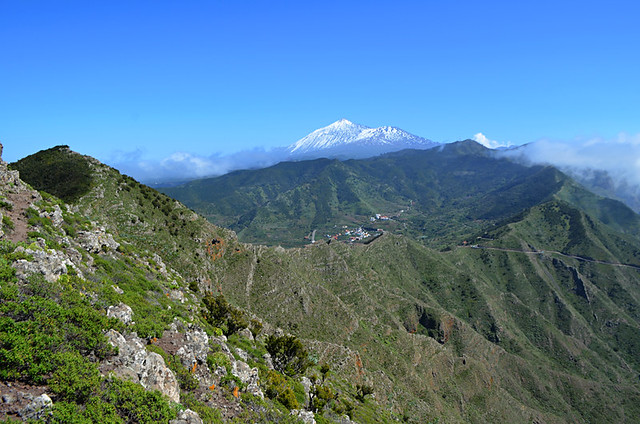 Even better in our view is the El Palmar Valley from the hills above. On a clear day with Teide adding gravitas to the verdant caldera, it is exquisitely beautiful enough to make the vistas of the sparkling Atlantic and La Gomera off to the side seem ordinary by comparison. 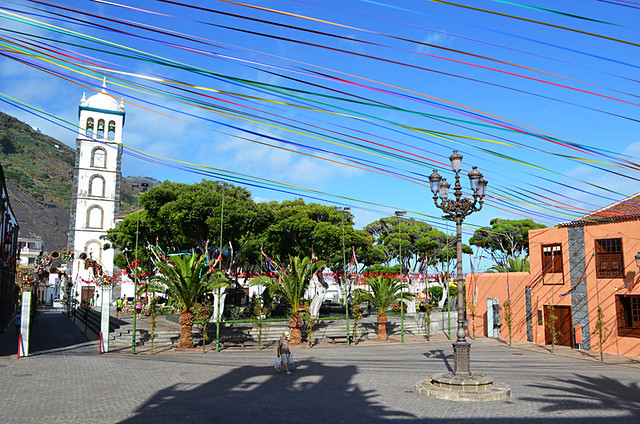 If there’s a prettier plaza in the Canary Islands we’ve yet to see it, or have anyone shout “I’ll see your Plaza de la Libertad and raise it with our Plaza de…” Andy told me she’d read a critical review of a guidebook by someone who’d dismissed Garachico with a “imagine my disappointment when I got there to find a dreary town.” Sometimes it’s a case of pearls to the swine.
The square is bordered by the African looking Iglesia de San Francisco, the tower of the Iglesia de Santa Ana, the lovely colonial boutique hotel La Quinta Roja, and the Palace of the Counts of La Gomera. Whilst centre stage is the kiosk bandstand, Indian bay trees, an open plaza and a statue dedicated to Simón Bolívar, the freedom fighter responsible for freeing a number of South America countries from Spanish rule. Every direction you look is history and beauty. Dreary, my culo. 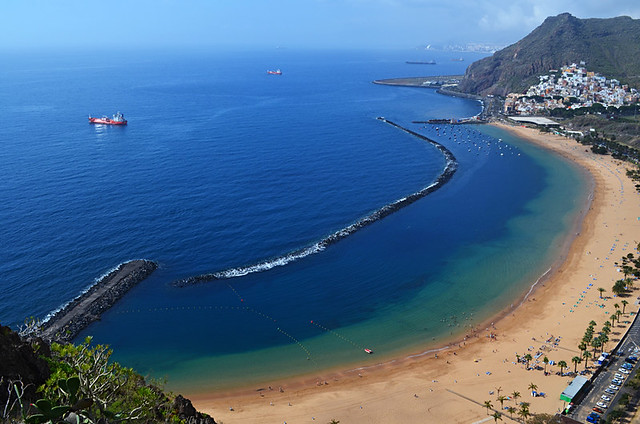 It’s another man-made entry but Playa de las Teresitas from the viewpoint overlooking the golden sands is one of Tenerife’s standout vistas. As well as the sweeping beach and turquoise water you get the fishing village of San Andrés tucked into the hillside, and even the Tenerife Auditorium in the distance. It’s such an eyeball-pleasing sight it makes it onto the cover of numerous guidebooks (not ours as we like to be different) and is regularly used in travel articles about Tenerife, even when the content doesn’t actually mention the beach. 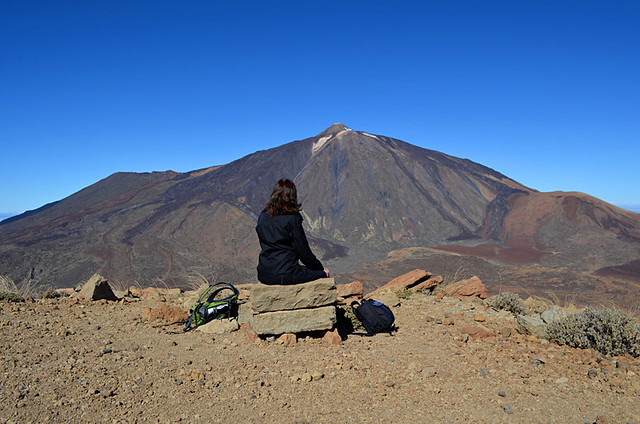 We go along with Karl Pilkington’s line of thinking when he observed the view from a cave opposite is better than the view looking out from Petra in Jordan. Similarly, although the view of Teide National Park from Mount Teide is pretty special, even better is the view from the summit of Montaña Guajara where Tenerife’s most dominant feature, the mighty mountain itself, forms part of the epic volcanic panorama. 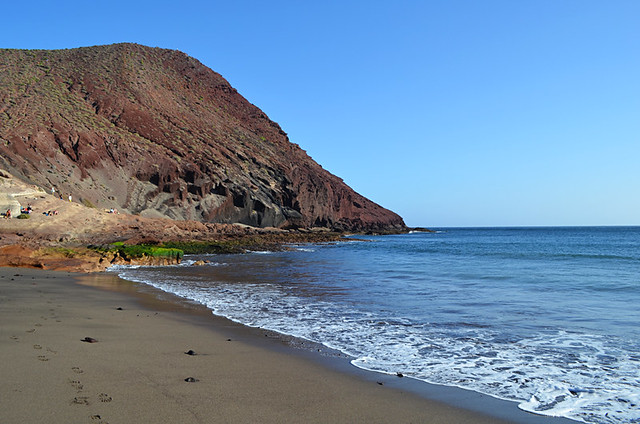 The distinctive red mountain jutting into the Atlantic greets everyone who arrives by plane at Tenerife Sur Airport… if they can tear their eyes away from el Teide that is. Viewed from up close it’s equally impressive and quite a unique feature. Walk around it, or scale it, and you see its multitudinous rosy faces. Best for us is from the soft sands on Playa de la Tejita. 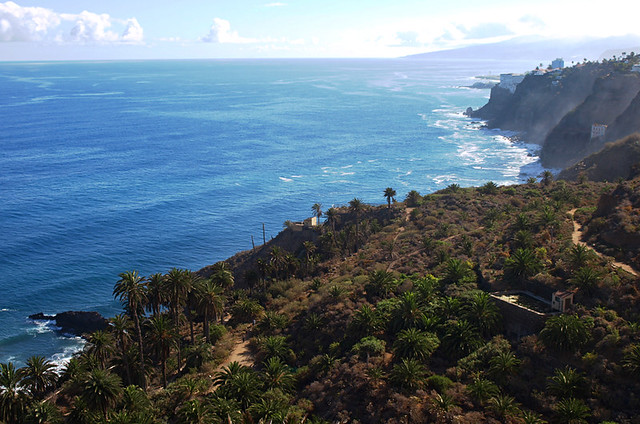 In our opinion the most dramatically beautiful section of Tenerife’s coast lies between Puerto de la Cruz and Garachico where man and nature have done a decent job of complimenting each other. Rugged cliffs, colonial haciendas, a ragged coastline and seas of banana palms combine to create a visual treat, especially above La Rambla de Castro. 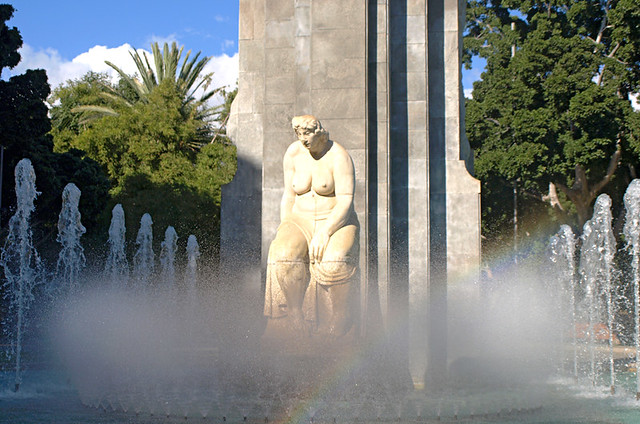 Parque García Sanabria is simply one of our favourite parks anywhere. Art and subtropical foliage make for perfect partners, creating a space where you can sate a hunger for both culture and nature. I have a real fondness for the park’s bamboo tunnel, especially when the sandy path is littered with lavender jacaranda petals. But the view which acts like a tractor beam for the eyes is of centrepiece Fecundidad bathing her ample thighs in the fountain’s fine spray whilst a rainbow dances around her shapely form. 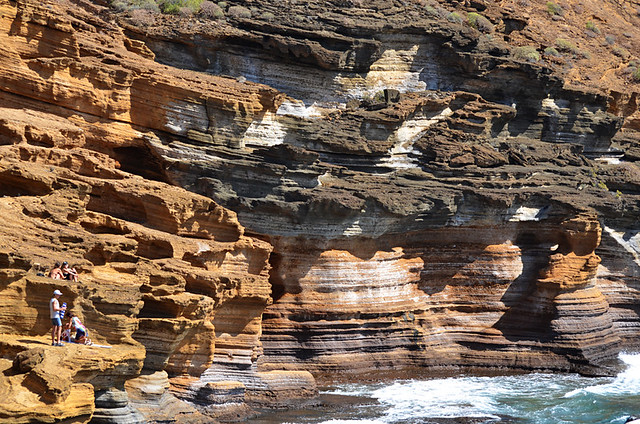 First viewing of the surreal yellow mountain is all the more remarkable and surprising as one of the approaches involves passing what looks like more of an abandoned squat in a rundown industrial inner city area from the 1980s than an apartment block in a tourist resort. It’s like finding a sparkling diamond in a midden. 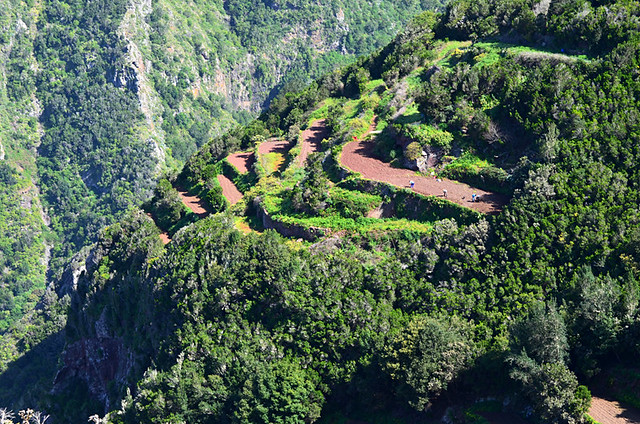 We could have picked any number of locations in Anaga, and it feels criminal to only mention one when it would be possible to fill ten ‘beautiful places on Tenerife’ with Anaga vistas alone. But in the interests of diversity we’re only throwing in one – the high and narrow agricultural terraces near Chinamada. From our first walking experience in Anaga we said if you were able to drop someone in those mountains without them knowing where they were, they wouldn’t answer ‘Tenerife’ if they had a thousand attempts at guessing it right. South America maybe, Tenerife never.

There’s an old Diana Ross song which begins with the line “Do you know where you’re going to?” It’s a question which could apply to some people as they step off their planes at Tenerife South Airport. […]