Spring is in the air and everything hots up; from the weather to what’s happening in the streets. There are absolutely loads of events on Tenerife during April, ranging from religious fiestas to harvest festivals and classical concerts to jazz and ballet. Foodies are totally spoilt in Tenerife this month with at least  four tapas and gastronomic routes to get your teeth into.

The Best Fiestas on Tenerife in April
Easter (Semana Santa) in Tenerife is a serious affair. That’s not to say it isn’t interesting. Most traditional towns will have solemn processions during the week between Palm and Easter Sunday with the main events usually taking place during Good Friday (17 April). There are some places where the spectacle is quite different from what newcomers to Semana Santa in Spain might expect. 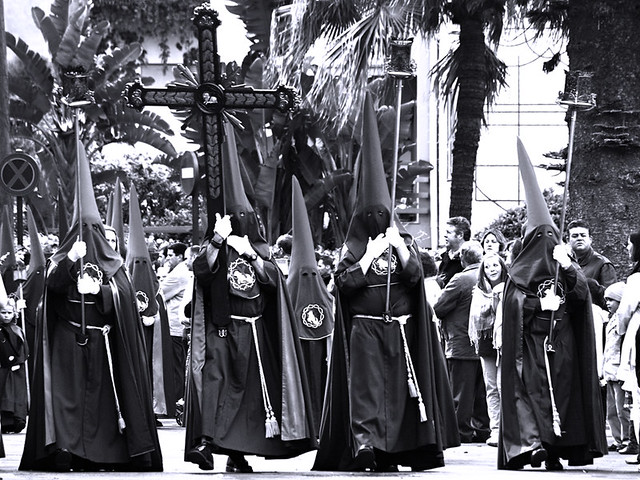 The Passion in Adeje and Candelaria
An alternative Semana Santa celebration that is equally moving is the Passion. On Good Friday (from Midday, 18 April) in Adeje town over 300 locals take part in an evocative and ambitious piece of street theatre that depicts the last hours of Jesus Christ.

One of the liveliest romerías on Tenerife takes place in lovely little Tegueste on the 27th of the month. The little town near La Laguna becomes a sea of people and animals as ox drawn ships sail through the streets for the Romería de San Marcos. It’s a very busy and colourful fiesta which draws  younger Canarios in traditional dress in their hordes. Vibrant and loads of fun.

Arona Book Fair (Plaza del Pescador; Cultural Centre, Los Cristianos; 10-12 April )
Arona’s Book Fair involves more than towers of literary offerings – there is a serious of events over three days, including concerts and dance performances, from 7.30pm on the 10th till 9pm on the 12th.

Canary Islands Food Fair (Explanada Casa del Mar, Los Cristianos, 10 & 13 April)
A great way to taste the best of Canarian food without having to travel far from then southern resorts, the Feria de Alimentos Canarias takes place over two days and involves kiosks with cheese, wine, breads, honeys, mojos etc. There is also a gastronomic route in the town over the same period with participating recipes offering special Canarian menus consisting of… well, the sort of things you’d find in most traditional Canarian restaurants.

Camino de Santiago Gastronomic Route (La Laguna, till 1 May)
A tapas route with a difference the ‘Camino de Santiago’ involves 28 La Laguna restaurants offering the sort of regional dishes you’d find in seven Spanish provinces that the  Camino de Santiago travels through. €3 gets you a taste of the cuisine from La Rioja, León, La Coruna, Burgos, Lugo, Palencia and Navarra.

Feria del Saldo (El Médano; 12 & 13 April, 11 till 8pm )
Simply a shopping fair with a serving of music attached. Good for picking up some Tenerife specials that are of much better quality than the stuff found in the interchangeable tourist shops. No ‘I heart Tenerife’ tee shirts here.

Tapeando Isora – Tapas Route (Guia de Isora, till 20 April)
Thirty one restaurants in towns and villages around Guia de Isora will be offering a ‘special’ tapas and a drink for €2.50 as part of the IV Tapeando Isora tapas route. There are some nice sounding tapas to be munched.

Tapas & Wine Route (Tegueste, till 30 April)
And yet another tapas, this time a tapas and wine one in lovely Tegueste where more than 30 restaurants around the municipality are offering tapas and wine for €2.75 throughout April.