Still in the twilight zone between the main Northern European season and the start of the mainland Spanish season you’d think June might be one of the quiet months on Tenerife. And yet it has some of the best fiestas and music festivals of the year. June really kicks off the start to summer and is reminder that most of the best events on Tenerife aren’t put on for the benefit of visitors.

Weather wise it’s normally warm and dry with maybe only a few light showers early in the month to see off spring and give the land a damp down before the long, hot, dry summer kicks in.

In short, it’s a fun month. 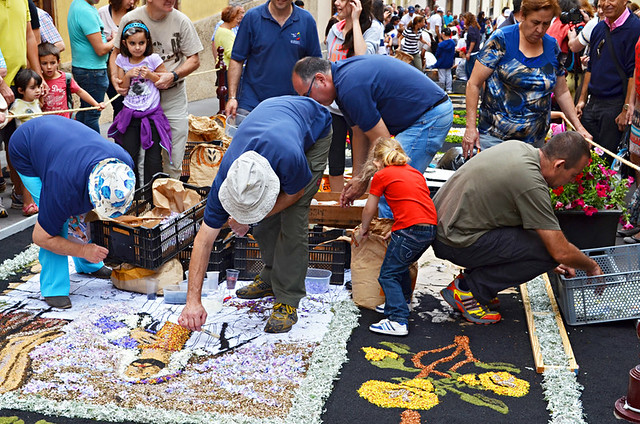 Corpus Christi and Tenerife’s Flower Carpets
The most colourful and sweetest smelling festival of all on Tenerife is the Corpus Christi celebrations in La Orotava. It’s very late this year, falling on 26th (actually a week after the date of Corpus Christi).
It’s a magical day as beautiful flower carpets are laid on the lovely old streets around the town hall and the Iglesia de la Concepción. The centrepiece of the event is the huge sand tapestry in the plaza in front of the town hall which is a transient work of art, weeks in the making and tramped over at the end of the Día de las Alfombras (day of the carpets). There’s a buzzing, party atmosphere and La Orotava gets very busy as people travel from all over to see the carpets. Turn up after 3pm and you’ll find the streets are a lot quieter.

Flower carpets are laid in other towns across Tenerife (Santa Cruz, Guia de Isora, Tacoronte) but none are on quite the same scale, or as elaborate, as La Orotava’s. La Laguna’s (on the 10th) has more carpets but, like a lot of other places, most aren’t always made with flowers.

Three days after the Día de las Alfombras, La Orotava holds one of the most vivacious romería’s on Tenerife in honour of San Isidro and the streets are filled with colour yet again. 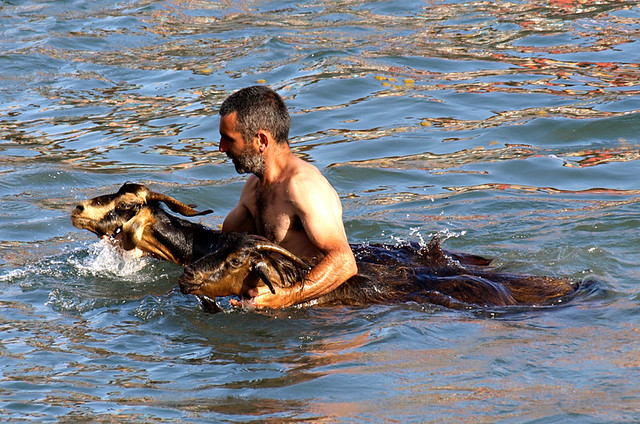 Fiestas de San Juan
The time of magic and love, on Midsummer’s Eve (23rd) Canarios head to the beaches across the island to enjoy beach parties and a midnight swim. The biggest and best, featuring live bands, is at Playa Jardín in Puerto de la Cruz. Not the place for anyone who doesn’t like crowds as the beach is packed to capacity with revellers. If you don’t mind crowds and a party atmosphere it’s great fun – food, lots of wine and a swimming costume are essential. Midnight bathing is said to guarantee good health, fertility and the chance of some hot love.

In some other towns the tradition is to leap over bonfires. Personally, I prefer sticking to a ‘bracing’ dip… and then getting close to a beach bonfire.

Midsummer morning (24 June) sees the wet and noisy baño de las cabras (bathing of the boats) in Puerto de la Cruz at the harbour. The goat bathing starts from early morning and is fascinating to watch as goats from the La Orotava Valley are dragged kicking and screaming into the water. No animals escape their annual dip; after the goats it’s the turn of horses. It’s a tradition that dates back to pre-conquest. 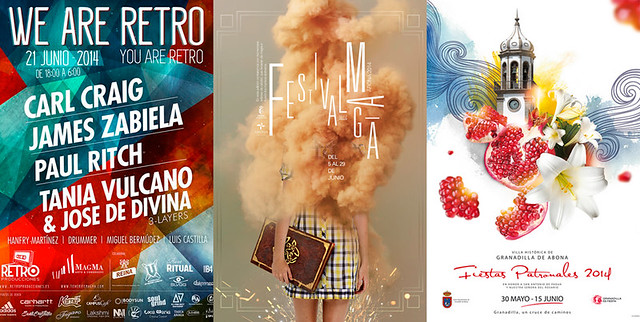 Ritmos del Mundo (Siam Park, Costa Adeje, 14 June, 3pm to Midnight)
The good news is that Ritmos del Mundo, one of the biggest and most popular summer DJ fests, is back rocking Siam Park. The bad news is that if you don’t already have a ticket, forget it. It’s totally sold out.

Fiesta de la Música (La Laguna, Plaza de Santo Domingo, 20 June)
A bit of a musical free for all with all sorts of music styles. Details are still a bit thin on the ground as they’re still putting it together. But as it’s all free it doesn’t really matter. It’s a good way to see some local talent in one of Tenerife’s historic cities.

Kyle Eastwood Band (Santa Cruz, Auditorio de Tenerife, 7 June, 9pm, tickets €20)
The name should be familiar and so should the style of music if you’ve seen some of his dad’s movies like Mystic River, Million Dollar Baby and Gran Torino. Saying that, this is a more jazzy performance than those haunting sountracks.

Santa Blues (Santa Cruz)
There’s not a sniff of information about this yet. The same thing happens nearly every year – virtually no information until the last minute. Is it going ahead or isn’t it? Who knows? Watch this space.

We Are Retro (Costa Adeje, Magma Centre, 21 June, from 6pm, tickets from €20)
Twelve hours of music from eight different artists including local and international names. Is it retro? I guess you’ll have to go to find out.

Festival of Magic (Arona, various, 5 to 29 June)
watch out for wandering magicians around Arona this month as the Magic Festival moves from town to town in the southern municipality ending in Los Cristianos at 8.30pm on 29 June.

Rute de la Tapa (El Sauzal, 19 June to 4 July)
There is still not a lot of details about this (prices and participating establishments) but if you’re looking for a tapas route later this month, El Sauzal is the place to go.

Pescado Azul Gastronomic Route (Granadilla de Abona, 20 June to 6 July)
Another municipality with a gastronomic route in June that hasn’t yet finalised the details of prices and participating establishments is Granadilla de Abona. This one has a blue fish theme (tuna, mackerel, sardines etc.) Welcome to last minute Tenerife.

An overview of ten Tenerife towns

These are ten Tenerife towns where it’s relatively easy to take a photograph which gives a good illustration of the town and its location. […]