November is the month of wine, chestnuts and tapas routes on Tenerife. It’s also one of the ‘rainy’ months, so finding things to do indoors, like eating and drinking wonderful tapas, isn’t a bad idea to have as plan B. Summer is definitely at an end and with it comes a different vibe as the main Northern European season starts and winter residents return to the island. 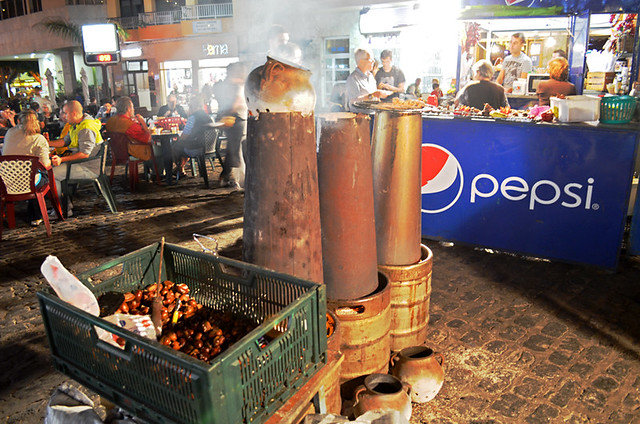 The big fiestas this month are to celebrate the new wines hitting the streets and the place to be to experience them is in the north where the sight of roasting chestnuts brings an early festive glow.

As we say every year, November is a month to eat, drink be merry.

Fiesta de San Andrés, Puerto de la Cruz (29 November)
The night of the 29th is really for children as they get to drag pots, pans, washing machine drums and anything that clangs or bangs around the streets as part of the celebrations called Arrastre los Cacharros. For adults, the best thing about celebrating San Andrés (St Andrew) is the wine and chestnut stalls set up around the harbour throughout the month. These are usually joined by a wine fair and live music in the days around the 29th.

Arrastre de las Tablas, Icod de los Vinos (29 & 30 November)
The celebrations in Icod de los Vinos aren’t for the faint hearted and involve younger residents careening down the town’s streets on trays to crash into a mountain of car tyres. Who needs Playstation? This takes place throughout the day and becomes increasingly wilder after dark as more and more wine is consumed and some older and former downhill racers fancy recreating past glories or, more usually, crashes. In the end, it’s all about wine and there are plenty of bars and stalls to drink wine, eat food and soak up the scene.

Earth, Wind and Fire Experience, Costa Adeje (Magma Arte & Congress, 4 November, 9pm, tickets €42)
Not exactly at the cutting edge of contemporary music Earth, Wind and Fire is the big name international group playing the island this month. I’m sure it will be fun and funky, but we’ll give this Boogie Wonderland a miss.

Canary Live Music, Costa Adeje (Magma Arte & Congress, 15 November, 9pm, tickets from €12)
A chance for visitors to the south of Tenerife to enjoy the sort of music we hear at all the big fiestas. Six of the top local ‘orquestas’  bring the Latino spirit to Costa Adeje for an all night party.

Panzaburro, La Orotava (Parque Cultural Doña Chana, 8 November, 7pm-2.30am, tickets from €5)
The title of this music fest is a bit of a wink at typical November weather. Six groups/singers/DJs heat up the night in La Orotava for this mini festival.

17th Festival of Theatre and Dance, Adeje (Cultural Centre, 7,14,21 and 28 November, tickets from €8)
Love, friendship and French surrealism are amongst the subjects covered in Adeje’s XVII Festival de Teatro y Danza. A very different scene from the karaoke bars and tribute acts at the coast.

Exposaldo, Santa Cruz (Recinto Ferial, 6 to 10 November, open 11am to 9pm, entrance €3)
Exposaldo is a shopaholics dream, the huge ‘consumerism’ fair at the Recinto Ferial has everything from clothes and shoes to cars at knock down prices. It’s an interesting event even if you don’t buy, but I still think it’s cheeky to charge entrance fee to what is basically a shopping market.

Honey Festival, El Sauzal (Casa de la Miel, 22 and 23 November, 10.30am to 6pm, free)
This sweet little food festival offers a great chance to try and buy Tenerife honey, and there are some superb and quite unusual honeys on this island. It isn’t just honey on sale, there are other goodies as well.

Chestnuts in Acentejo (Throughout November)
There are a few events with a chestnut or apple theme in Acentejo this month. Between 1 and 15 November is the chestnut fair, with restaurants in Acentejo (La Victoria, El Sauzal, Tacoronte, Santa Ursula and La Matanza) preparing special dishes with a chestnut theme. It’s chestnut and mushroom week at the town hall in Santa Ursula between 3 and 9 November. La Victoria is holding a handicraft and chestnut fair on 15 and 16 November whilst La Matanza holds their chestnut fair on 22 and 23 November. Finally, Tacoronte celebrates San Andrés with chestnuts and wine on 28 November.

Ruta de la Tapa, La Orotava (6 to 30 November)
This tapa route is only on Thursdays to Sundays during the period, with up to 27 restaurants participating around La Orotava, serving tapas and a drink for €2.50.

Tapeando Isora, Guia de Isora (Till 16 November)
There are 29 establishments participating in Guia’s tapas route, offering a tapa and drink for €2.50. The cafés/restaurants are spread out around the municipality; however, with eleven are in Playa San Juan and nine in Alcalá you could enjoy two decent tapas routes in a couple of the nicest coastal towns in the south of Tenerife.

Saborea San Miguel de Abona (Till 16 November)
Sixteen establishments are participating in the tapas route in San Miguel de Abona, offering a tapa and drink for €2.50. Like Guia de Isora, all are spread out around the municipality. The town of San Miguel de Abona has most and is a lovely historic Tenerife town in which to try some tapas that are a bit different. Each restaurant will be offering two choices, one of them an eco tapa.

Mes del Vino, La Laguna (1 to 29 Nov)
It’s all about wine and tapas in La Laguna this month with many restaurants and cafés in the city offering local wines and tapas. Casa Viña del Norte looks a good place to try a few, with a menu of 5 wines and 5 tapas on 8 and 9 November.

Sweet Potato, Cheese and Avocado Tapas Route, Güímar (14 to 30 November)
There are 30 Güímar restaurants participating in this tapas route, doing creative things with sweet potato, cheese and avocado. There are also food fairs on Sundays throughout the month at the  Mercado del Agricultor.

Patapa tapas route, Los Realejos (14 to 30 November)
Nice little play on words from Los Realejos for their tapa route. Pity they didn’t put as much effort into making it easy to find actual details. The drill is the same as usual though – tapa and a drink for €2.50.