“I’m really sorry about the weather,” I apologised to yet another person.

It had been the Tenerife Walking Festival plus the week a lot of Brits took their Easter holiday. The weather had been poor.

It hadn’t been great anywhere on Tenerife. The Barranco del Infierno in Adeje had been closed because of the bad weather and whilst we didn’t get the cold blustery wind other parts experienced, in the Orotava Valley we didn’t venture outside from Wednesday afternoon till Friday morning as it was grey, wet and miserable.

This often happens at some point in March. It’s a bugger for visitors who are unlucky with their timings, but rainfall in spring is welcome as it helps reduce the risk of forest fires over the long, hot, dry Tenerife summers.

Thankfully the clouds cleared for the Walking Festival’s closing party on Saturday and it was a beautiful day. 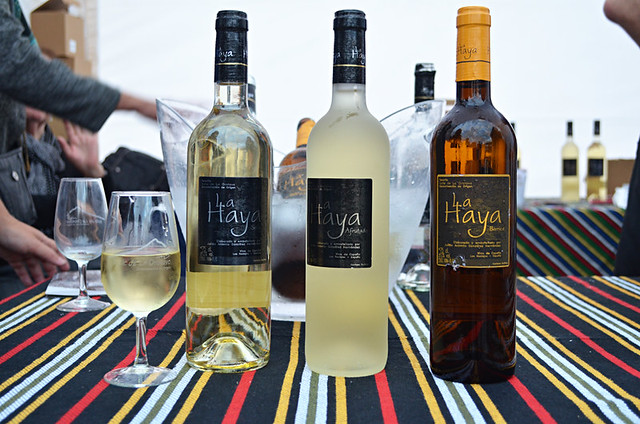 Part of the closing festival included a wine and tapas fair which to us seemed an attractive alternative to cooking. Just before sunset we headed down to Plaza Europa with a plan. If there was enough choice of tapas we’d eat at the fair. If there wasn’t we’d stop at restaurant Poco Loco on the way home as we’d had a yen for Mexican all week.

There’s a popular belief that Puerto de la Cruz is somewhat of one big third age home, ‘it’s full of old people’ is how some folk put it.

Tenerife, like the other Canary Islands, does play host to a more mature holidaymaker in winter than in the summer months. That’s all of Tenerife’s resorts. We regularly spend time in every one of them and I can’t see much of a difference in any between November and Easter when it comes to the dominant demographics. What’s more, I don’t see what the issue with that is anyway. Some people are fun, some people aren’t; some people are interesting, some aren’t. It’s not age which defines which are which. 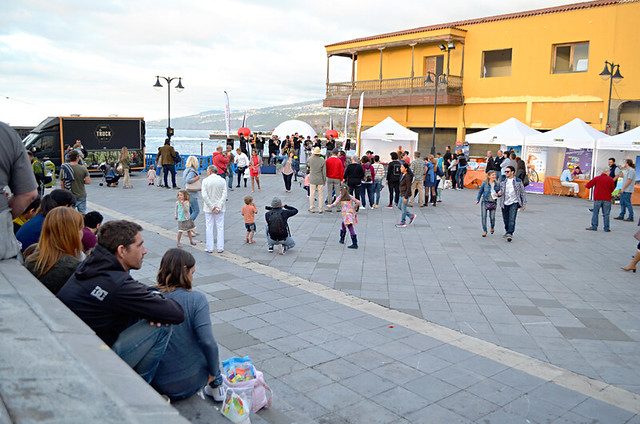 The place to be on a Saturday night in Puerto isn’t inside a pub listening to cabaret, it’s usually outside on the street at events like the wine and tapas fair. These are where you find the true essence of the town. The people who frequent these sort of events are of all ages and mostly, but not exclusively, local. If you ‘go local’ in Puerto you experience a very different scene than visitors who don’t.

Plaza Europa wasn’t particularly busy thanks one hugely distracting event – El Clásico, the football match between Barcelona and Real Madrid. On our walk from the harbour car park to Plaza Europa in front of the town hall we passed bar after bar packed with punters glued to TV screens.

Despite not being heaving, the atmosphere at the fair was like a friendly hug. 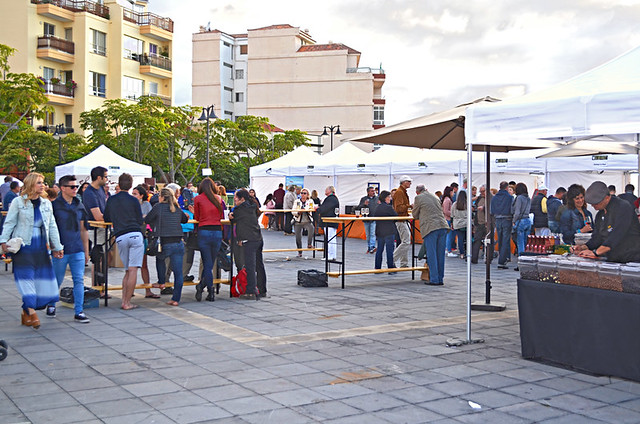 There’s such an incredible feelgood factor at these events; one of the things that Portuenses do best is know how to enjoy themselves. The atmosphere that talent creates is addictively infectious.

Some people queued at an encampment of little white tents to buy pinchos, tapas of octopus and mash potato, artisan chocolates, wines from the valley, honeys and even Vietnamese baguettes (they’re big in Saigon apparently). Others stood chatting at high tables, drinking and picking at their tapas. 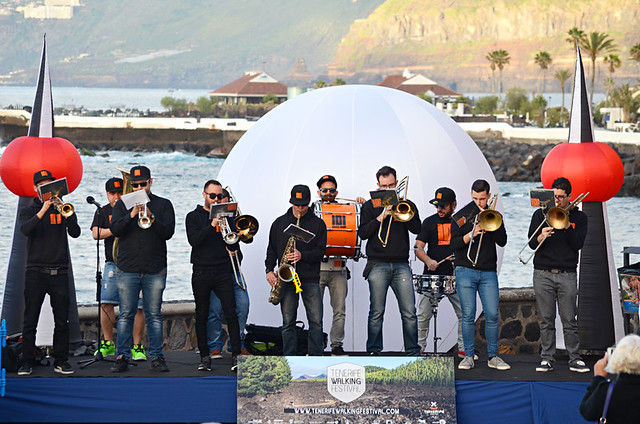 We sorted ourselves with a couple of glasses of white wine and watched an excellent band, 101 Brass Band from La Orotava. Like York’s New York Brass Band, they’re not your stereotypical brass band.  As we watched people dance to the band’s brassy version of Happy Andy spotted a familiar face amongst the crowd, an Irish travel writer in town for the Walking Festival. She in turn introduced us to her fellow walkers which is when we started apologising for the weather.

The response from every one of them was exactly the same.

“It’s been a fantastic week.” 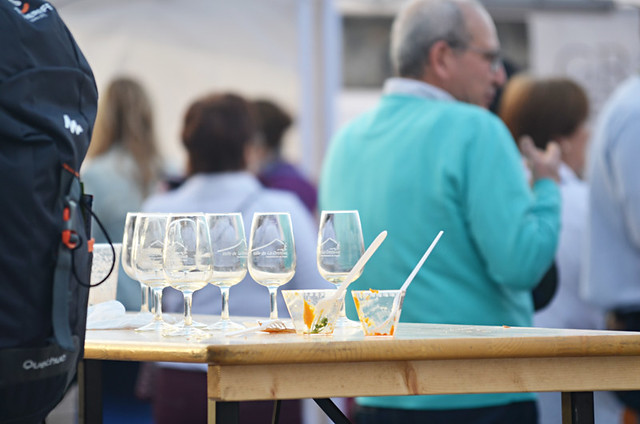 They’d been completely hooked by Tenerife’s charm. They’d had a great few days and it showed.

Standing on a traditional Canarian plaza on a warm spring night eating tapas, drinking wine and sharing stories with new friends whilst a hipster brass band provided the soundtrack was a perfect end to their walking festival.

They were an interesting bunch, representing various countries and from differing backgrounds. We spent a couple of hours chewing the fat before leaving the happy hikers to enjoy the rest of their last night. We hadn’t actually eaten any tapas and still had a yen for a Mexican. 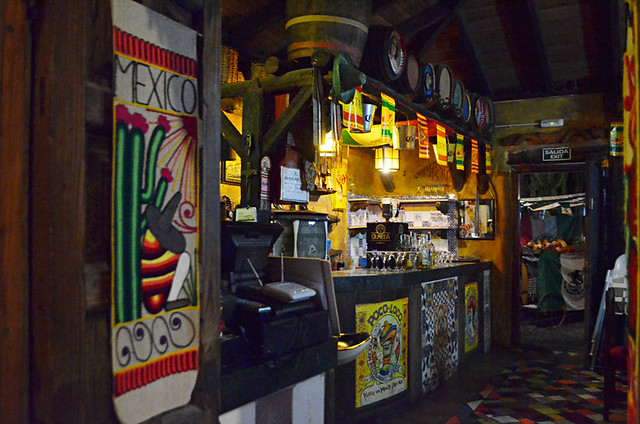 As we were later than planned Poco Loco was already nearly packed to capacity. They managed to squeeze us in at a table just before it got even busier. It was loco busy (maybe that’s where they get the name).

Strangely, most of the other customers were local girls glammed up to the nines and having margaritas and burritos before they moved on to the bars and clubs. Maybe Canario girls are better at coping with spicy food than Canario lads. 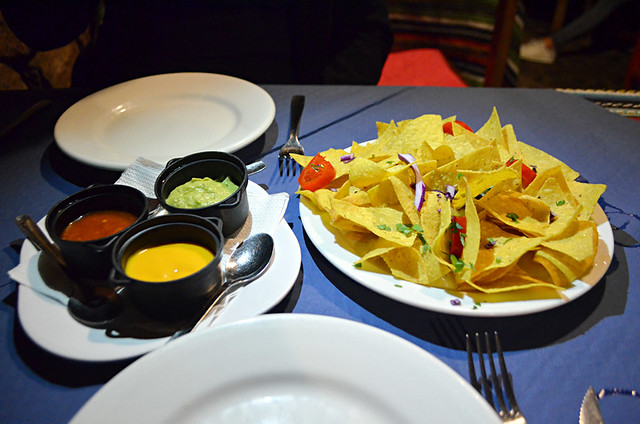 We were probably the oldest people in the place.

When people roll out the ‘north of Tenerife is full of old people’ chestnut it says a lot more about them and where they choose to hang out than it does about the reality of life in towns like Puerto de la Cruz.