A few weeks ago I wrote about a typical Saturday night out in Puerto de la Cruz. This month it’s the turn of neighbouring La Orotava.

When we go out to sample the local nightlife, we don’t just confine ourselves to bars; there’s usually too much going on to just sit in a bar. And so it was the case when our nephew Liam and niece Emily visited mid July.

The Elite Festival in La Orotava had been in our plans for a long time as one of the main bands, The Good Company, are favourites of ours. We’d met Victor Ordonez, lead singer/songwriter with the band, a few years ago when he showed us around his favourite haunts on Gran Canaria. As well as immediately liking him, we became instant fans of his music. 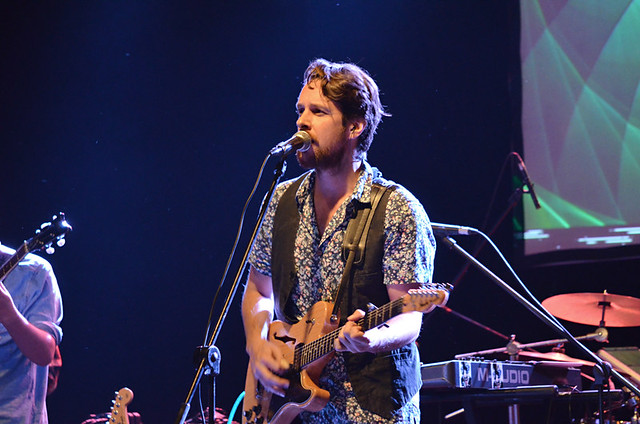 The four of us sweated our way up the hill to the bus stop and caught the 352 which deposited us in the centre of the newer half of La Orotava, a hop skip and a jump away from Parque Doña Chana; the venue for the festival.

It was the first time we’d visited Parque Doña Chana, and it is a small park – the sort of place ideal for quiet reflection… but maybe not whilst there’s a rock festival taking place. As it was only 9pm, there weren’t many people around, even though the festival had started and one of the bands, Moriran Todos (or it could have been Jon Snow and mates) was giving it their all, appreciated by a couple of neo-hippy female fans who danced enthusiastically in the evening sunshine. 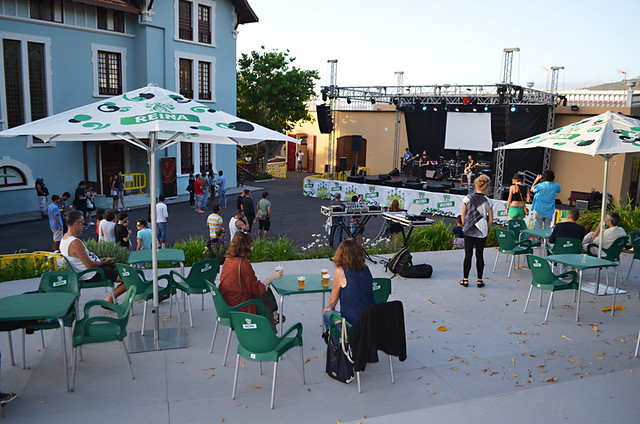 Although sitting in a lovely little park beside an equally lovely colonial building listening to live music and drinking beer, with views of Mount Teide and the north coast as a bonus, was no hardship, we decided to head to a bar in the town till the festival got a bit busier.

As we wandered out of the park we bumped into Leo, one of the musicians with The Good Company, who said hello in typical Spanish fashion, introducing Emily to the kissing on both cheeks way of greeting someone. As her ‘first time’ happened to be with a musician in a rock band, it was a tradition she immediately warmed to. 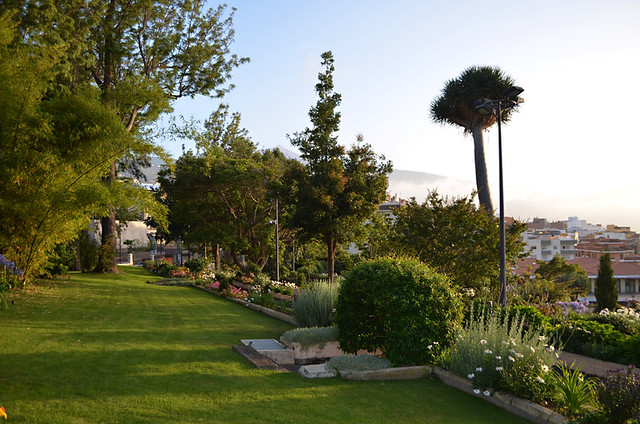 Although known for its historic old town, the bar scene in La Orotava is a modern and quite interesting one that we really need to explore more. The main scene is centred on a row of stylish bars above the town’s main car park. The sounds coming from them was the sort of music you’d expect from a town that has been known for its sophistication for five centuries, and more familiar than you’d hear in many traditional towns. We grabbed a seat outside Café Quilombo, usually a live music venue, but not on a night when there’s a music fest in town. It was still too early for Orotava’s night owls to be out and about, but we did spot a dog that looked like a chimpanzee. 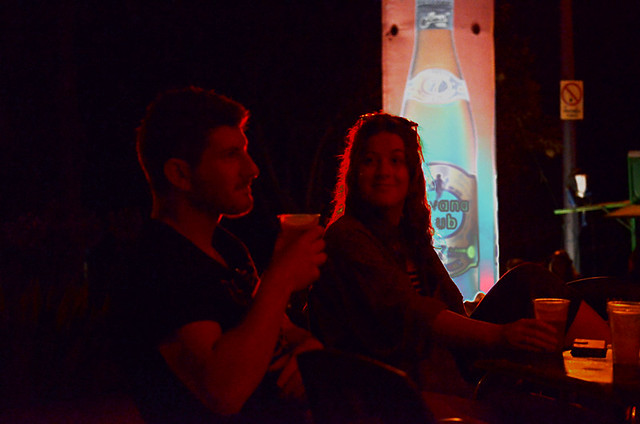 As darkness fell we returned to the Elite Festival where things had busied up; although there was still plenty of room to wander around, replenish drinks without queueing and get close to the stage. There’s a funny thing here on Tenerife where people stay a respectful distance away from the stage at concerts. I’ve lost count of the times I’ve heard bands encourage people to move closer. 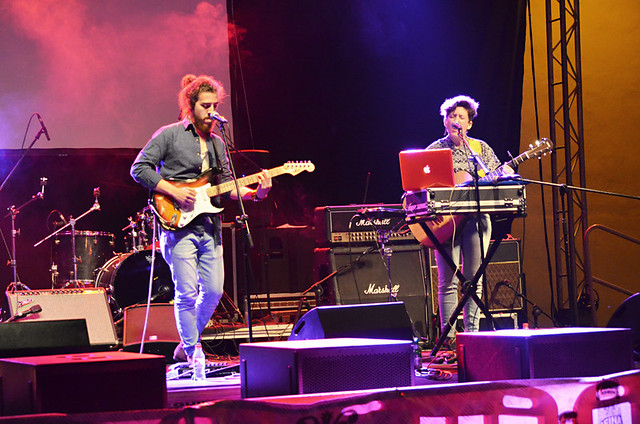 We arrived in time to hear a spellbinding and stand out performance from Bel Bee Bee. Worth catching if you see the name anywhere.
From then the night drifted enjoyably away in that typical Tenerife fashion as we people-watched, took turns getting beers, chatted to the band members from The Good Company and made room for more beers with frequent trips to toilets which were clean and queue free. Not something you’d find in a festival in Blighty. 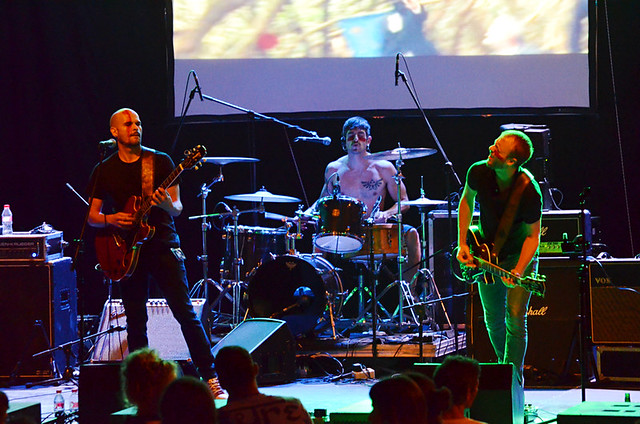 Bel Bee Bee was followed by a hi-octane set from Tripolar who looked as though they had come straight from auditions for the latest Mad Max movie. Following them was our Café Quilombo barman, who took to the stage with his group, Sanchesky. In between live bands, DJ Nico from Puerto de la Cruz played the sort of sounds which made us look forward to his next stint of keeping the atmosphere buzzing. 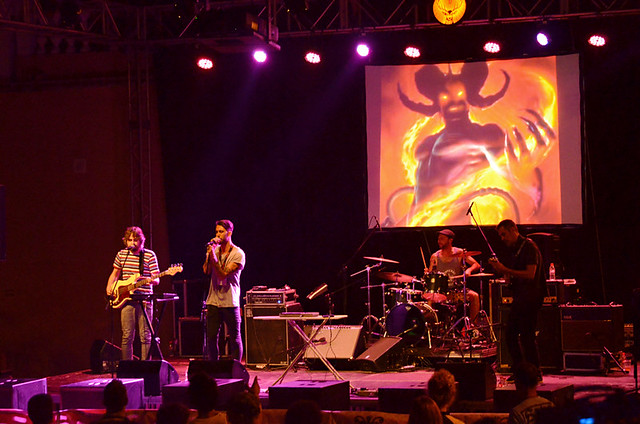 After that it was the turn of The Good Company who, despite a bit of a cock-up by the festival’s sound technicians, did a cracking set which had us humming Delta and Concord, from their latest album Walden Year, for the rest of the following week.

Sometime between 2 and 3am we decided it was time to head for home, surprising Emily and Liam who thought we were joking when we said we were walking rather than catching a taxi. 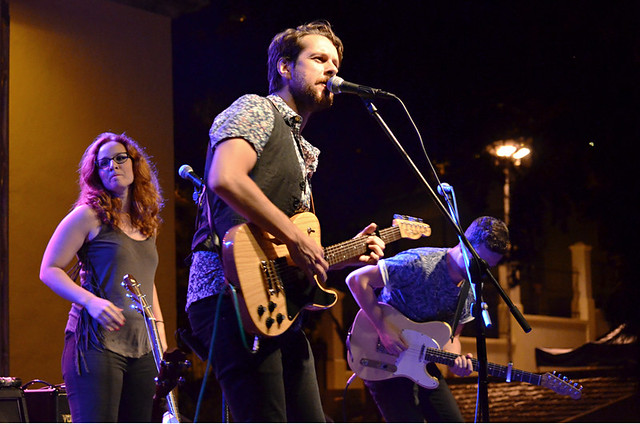 In the early hours of Sunday morning we swapped a rock festival for unlit narrow lanes which linked La Orotava with the outskirts of Puerto de la Cruz, following deserted country roads we’d never walked before, hoping Google Maps could be trusted.

They could. A rough concrete road we’d put our trust in emerged directly opposite the road leading to our house.

Thirty minutes from festival to feet up; a perfect end to a fun and memorable Saturday night out in La Orotava.