There’s an ominous slow and steady drum beat as we walk past the Iglesia de Francia in Puerto de la Cruz. We look across to where the town’s band is playing a funereal rhythm, half expecting to see someone being led to the gallows. The depressing sound means one thing. Easter on Tenerife is on the horizon. 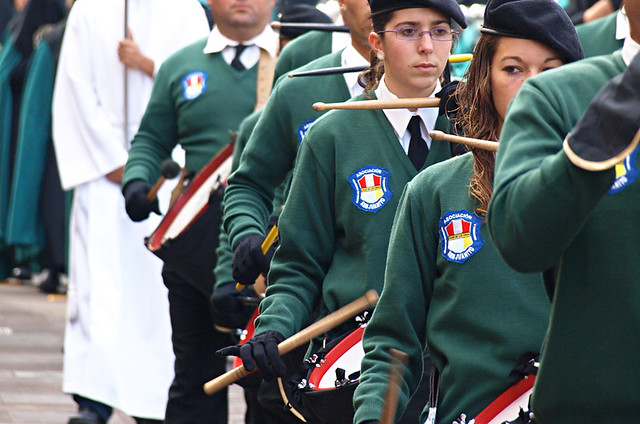 Easter on Tenerife is not exactly what you’d call a jolly affair.

Forget fluffy bunnies, apart from those in a salmorejo sauce, or Easter egg hunts. Easter on Tenerife is still all about a decent man being paraded through the streets before being nailed to a cross.

So the drumming evoking a feeling an execution is about to take place pretty much nails it (I apologize sincerely for that bad taste pun). 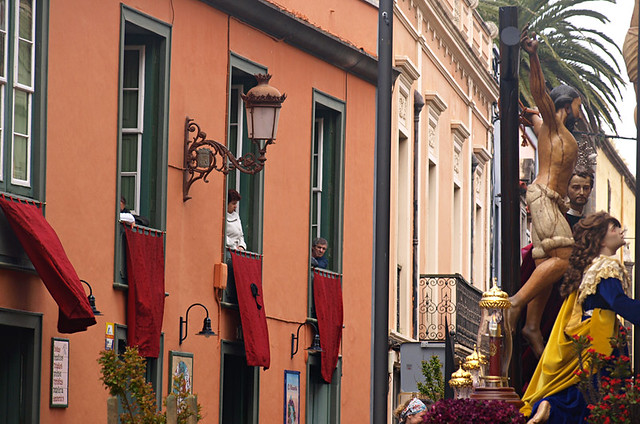 Easter on Tenerife is most decidedly a sombre affair. The posters to advertise Semana Santa on display in traditional towns across the island provide clues as to what to expect. There are no frivolous colours, or locals in traditional dress having fun. Basically they feature either a forlorn and battered Jesus or the Virgin Mary with a dagger through her heart.

That’s not to say what takes place on Tenerife at Easter, or Semana Santa as it’s called in Spain, isn’t interesting. 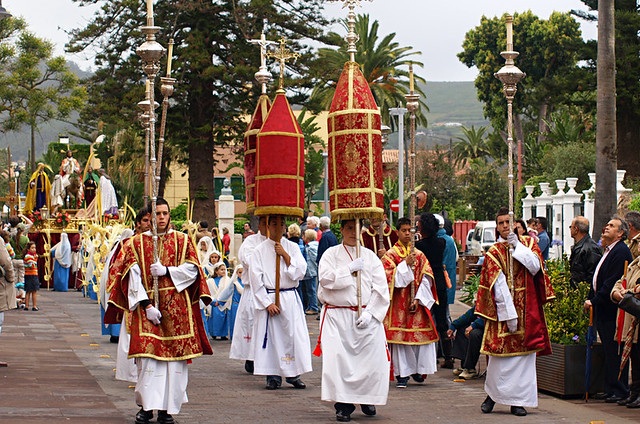 In the weeks before Semana Santa there are religious processions in traditional towns across the island. From Palm Sunday these take place in the bigger towns every day up to and including Easter weekend. Whilst it’s difficult to miss these if you stay anywhere remotely traditional, listen for that ominous drum beat and the occasional soulful wail of wind instruments, there are some locations where Semana Santa is particularly fascinating. 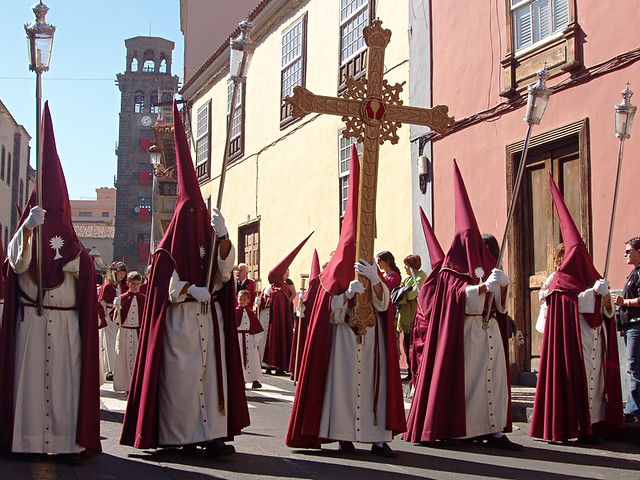 It’s no surprise the main ecclesiastical centre on Tenerife holds the most evocative processions. Partly this is due to the number of hermandades (religious brotherhoods) which silently (apart from the drum beat) march through the streets. But mostly it’s because of the uniform they wear – long cloaks and tall pointy hats which conceal the face apart from two holes for eyes. It’s initially a shocking sight thanks to the look being corrupted by the Ku Klux Klan, but it’s one which adds to the slightly surreal and vaguely disconcerting atmosphere. There are two main processions on Good Friday, the Magna Procession at 5pm and the Silent Procession at 10pm. Both are riveting whether you’re religious or not, and both are virtually silent despite the differing names. But witnessing hooded figures silently sway through narrow, old streets after dark is especially poignant and a bit spooky, especially when all the street lights are turned off.

The Passion in Adeje 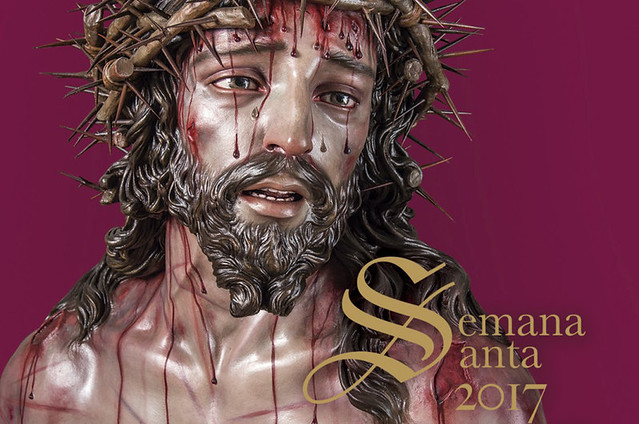 Equally poignant but more of a theatrical spectacle is the depiction of the last days of Christ, The Passion, on the streets of Adeje (the old town not the resort) also on Good Friday. Hundreds of locals take part in this elaborate piece of street theatre as the story begins at midday in Plaza de la Cruz del Llano and unfolds as it moves towards its gory climax at Plaza España. Thanks to the sheer scale of the Pasión in Adeje and the quality of the production it’s not only screened on Canarian TV it is broadcast nationally as well. With Adeje being so close to Tenerife’s main southern resorts, it’s an Easter event which is ideally located for visitors to reach easily.

The Passion is enacted in some other towns on the island, but not on the same scale. 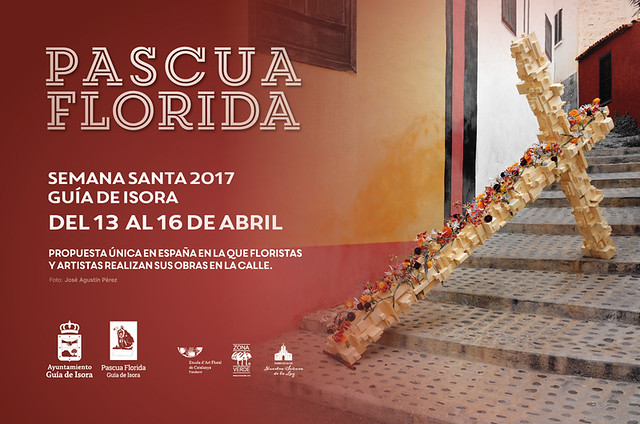 For an Easter tradition which is altogether lighter, brighter and more likely to put a smile on your face, Pascua Florida in Guia de Isora in the south west of the island bucks the trend of oppressively serious processions and depictions of Christ being crucified. During Semana Santa the hill town’s older streets are decorated with floral sculptures which are artistic interpretations of the Passion. It’s one we’ve yet to see ourselves but our friend Linda Wainwright describes it beautifully and makes it sound most alluring in her Island Momma blog. The festival, now in its 9th year, isn’t so well known and subsequently is a far quieter affair than the two ‘biggies’ in La Laguna and Adeje. Plus the sculptures are on display from 13-16 April, so no need for everyone to descend on the town at the same time. 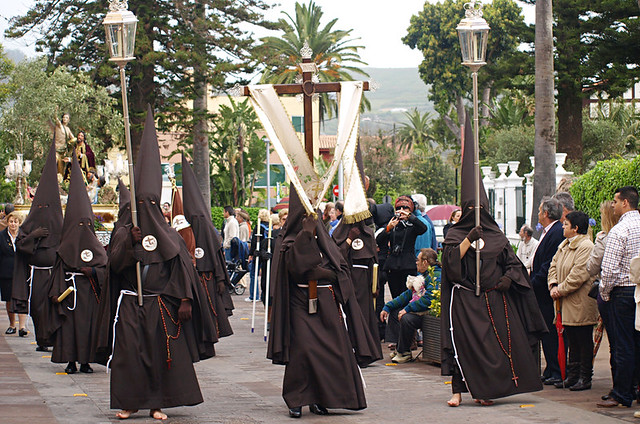 I’m not religious in the slightest, but I respect that people celebrate, if that’s the right word, Easter here in the manner in which they do. They haven’t allowed Semana Santa to be hi-jacked by the marketing men, subsequently it still has true meaning for the islanders.

But you know what? I really do miss being able to buy decent Easter eggs.