Overall
When I heard a luxury hotel was being built alongside one of my favourite coastal towns in the south west of Tenerife, I had worries that Alcalá would be spoiled. When I eventually set eyes on the completed Gran Melía Palacio de Isora my concerns dissipated in the warm gentle breeze. That it was a luxury hotel was clear, but its domed buildings were low rise and didn’t jar with the views toward La Gomera. The colour scheme was much the same as the surrounding landscape (no coincidence). Instead of clashing with the town, it seemed to compliment it rather well. Staying there has reinforced that view. 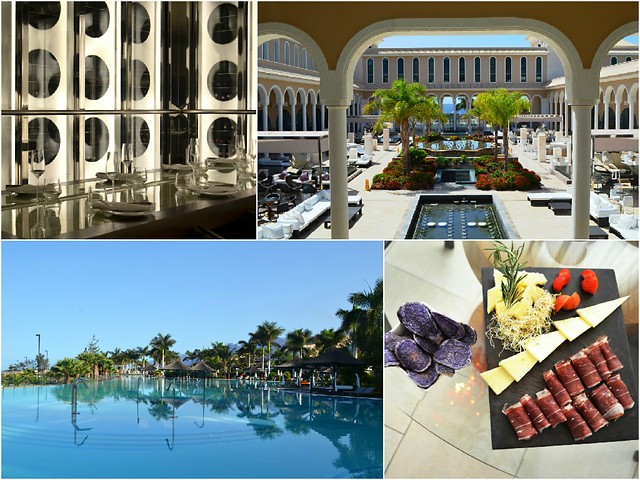 What is the Gran Melía Palacio de Isora Like?
It’s difficult to define the style of the Gran Melía Palacio – at times you can see the colonial influence, at others there’s a calming, Far Eastern vibe. What’s consistent from the moment you walk through the front doors to see sculptures made from dried palm leaves, chic comfortable foyer furniture and twirling silver mobiles below a silver dome is that this is a hotel where style and artistic touches stroll hand in hand throughout the grounds. It also reminded me of stepping into some luxury beach hotels in Thailand where the views of the ocean unfold before you. 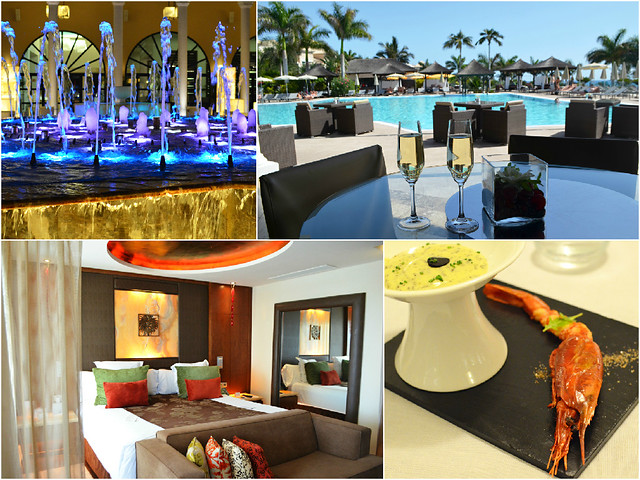 It’s not really like any other Tenerife hotel we’ve stayed in. That’s something I really like about the new breed of luxury hotels on the island – they have their own personality. The inner courtyard beyond the foyer has the air a real plaza about it with shops, bars, restaurants set around fountains and tables and chairs that look as though they’ve been set for a society wedding.

When we arrived it was quiet, most people taking advantage of the sunshine by lounging around one of the seven pools, one of which is the largest infinity pool in Europe – pure Condé Nast cover material. At night, the courtyard came alive with dancing fountains and champagne flowing at the courtyard’s bustling bar whilst a DJ played cool sounds to guests lounging on the chill out furniture on the terrace overlooking the sea and La Gomera.

I don’t know if it’s always like this, but there was an electric after dark vibe that is often missing from hotels, even luxury ones.

The facilities are, as you’d suspect, almost endless:- a spa by Clarins that includes, amongst the usual range of body pampering offerings, special treatments for mums to be as well as for men; a gym (personal trainer if required); tennis; paddle tennis; archery; yoga; tai-chi… boxing and a children’s and teens’ club. 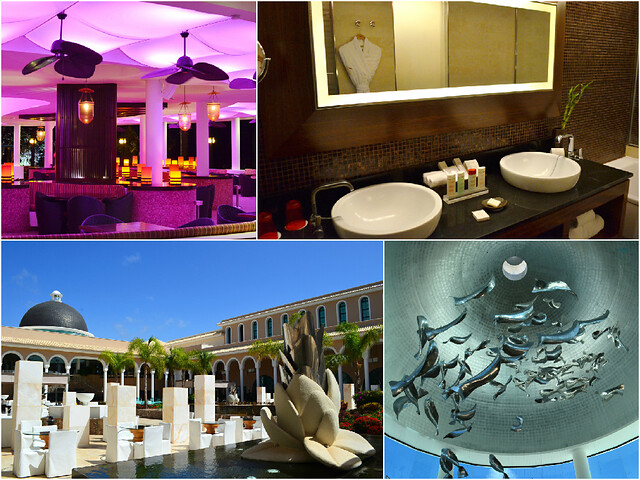 We almost never ever get round to doing any of those things, except maybe some spa time. In truth, it was just a pleasure to wonder around the tropical grounds and swimming pools spotting quirky bits of art and wallowing in the stylish luxury. A step outside of the hotel takes you to the latest additions to Alcalá; a new beach and seawater pools. I’ve no doubt the town has benefited from having the hotel next to it.

What are the Bedrooms Like?
We stayed in the Red Level part of the hotel and the bedroom was right up there with the most stylish we’ve rested our heads in. Mood lighting; mahogany furniture; billowing drapes; a sexy, fiery cupula above the bed; HD TV; fast free WiFi; a clock you can plug your iPhone into; a bathroom with that Far Eastern exotic look; a welcome slate of cheese, serrano ham and purple crisps and a balcony which not only had views of the sparkling sea but a jacuzzi as well. You could say we were pleased with that little package.

The Red Level has its own lounge where snacks, newspapers and drinks are available during the day. It also has its own pool. It’s an adults only zone which suited us perfectly. There’s also a Red Level for families. After a day out and about, a bit of quiet pool time was a real treat, especially as there was no hassle over finding a sun bed and there was a complimentary bar late afternoon. All in all, totally relaxing and re-energising. 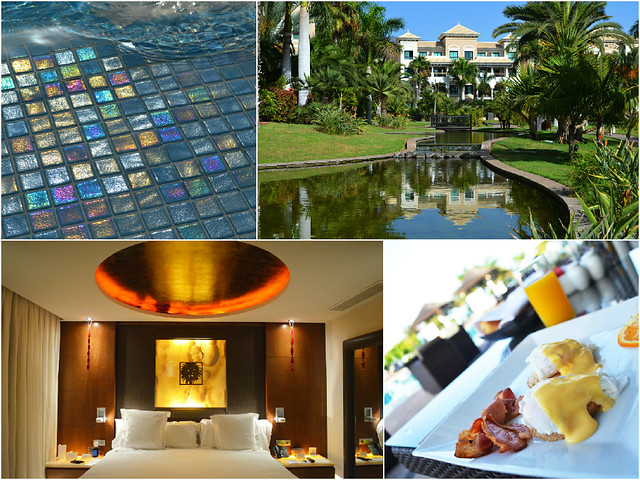 How Good is the Food?
Breakfast was served in the Red Level’s terrace and included an attractive and imaginative buffet or/and a hot menu which included scrambled egg with smoked salmon and eggs Benedict. Everything was freshly made to order.

For lunch and dinner, there are a great choice of restaurants. The Club Ocean has floor to ceiling windows, so you want to make sure you’re dressed to compliment the ice cool décor; the Oasis Grill has views across to La Gomera (good for sunset dining); the Nami Asian Bistro includes sushi show cooking and the DÚO tapas bar is as chic looking a tapas bar as I’ve seen.

We ate in the DÚO restaurant where the food, prepared by an Asturian chef, is unmistakeably Spanish in nature, but modernised so that it looks as contemporary as its surroundings. Basically you get dishes that border on avant-garde which are still as hearty as typical Iberian fare. The amuse-bouche of a huge langoustine with dip was big enough to be a generous-sized starter. Country cooking with bells on, and it rang mine. 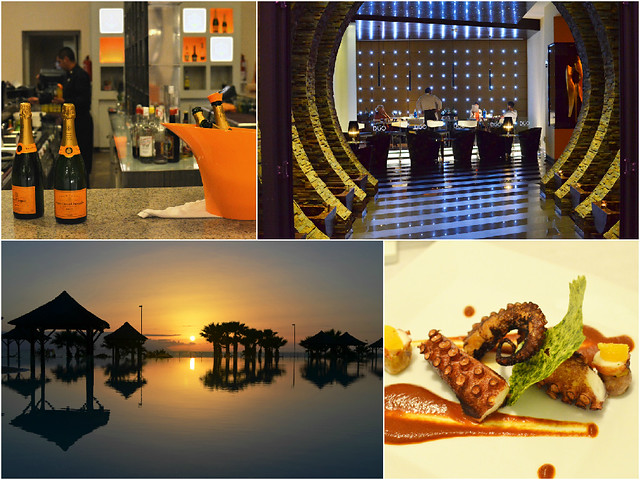 What is the Best Thing About Gran Melía Palacio de Isora?
For me the Gran Melía ticked all the right boxes for a modern, luxury hotel. From location and style to comfort and gastronomy it was five star all the way. And the sunset view from behind the pools is a winner.

Deluxe rooms are from €153 a night (breakfast included) in low season and from €183 in peak season.

Who Would it Suit Best?
There’s plenty of facilities to make it a good family hotel. But to me it stands out as an ideal place for couples to unwind in unabashed, subtropical luxury.

Lots of people like to sit under the Canary Island sun sipping from a jug of refreshing sangria. It’s an enjoyable thing to do, but it’s not ‘going local’. Sangria is most definitely Spanish. […]