What is a ‘secret’ restaurant on Tenerife? If a restaurant is a real secret it’s going to go out of business pretty rapidly. Basically, there’s no such thing as a secret restaurant. There are just restaurants you know about and restaurants you don’t. Saying that, there are some restaurants on Tenerife that seem more secret than others; hidden away on roads you would only drive along by accident or chance unless you lived there. The restaurant at Finca El Patio is one such place.

We first visited Finca El Patio many years ago and were completely charmed by the rural hotel located on a back road between Puerto de la Cruz, La Orotava and Los Realejos. It’s even better now that the finca has developed into an organic farm with fruit, vegetables and even the famous Canarian black pigs. 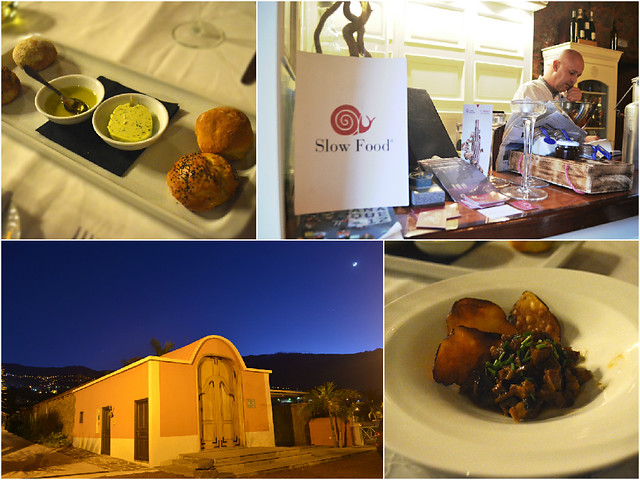 The restaurant is housed in one of the old buildings, a single room with a wooden, beamed ceiling and exposed red brick and stone walls jazzed up with some vibrant local art work.

When we popped in late afternoon to make our booking Dutch chef Adrian Bruins, co-founder of the Slow Food Canarias movement, had just baked some homemade rolls. As he took our details, he offered us one. A hot roll straight from the oven. We were won over there and then.

The Food at Restaurant Finca El Patio
At night the old building looks quite magical and even more of a secret hideaway. On a clear night I could see the dark shadow of the Tigaiga ridge which blocks out the bulk of Mount Teide at this side of the Orotava Valley.

There were a few other diners; a mix of guests from the rural hotel and locals on a ruta de tapas that was taking place at the time. El Patio’s black pig tapa drawing decent numbers throughout the night. 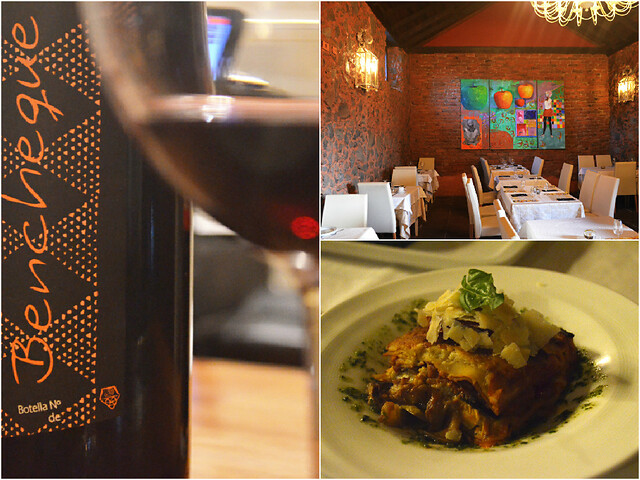 The menu isn’t extensive yet features a good mix of meat, fish, pasta and vegetarian dishes.  It’s influenced by Canarian gastronomy with some international dishes as well. For a concise menu, it ticks a lot of boxes. Seasonal products from the finca feature highly and we decided to try to cover a decent range of those.

To get the juices flowing we had a selection of Adrian’s bread with herb butter and extra virgin olive oil – simple, but a mix I love. The wine was almost as local as the ingredients; a bottle of Bencheque vino tinto from the vineyards up the hill in Cruz Santa.

Salads on Tenerife can often be bland and uninspiring. El Patio’s garden salad wasn’t one of those. It was relatively simple – mango, papaya, celery, goat’s cheese, three types of leaf, a pesto dressing with a hint of palm honey as well – but being fresh from the garden the mix of flavours and dressing was positively perky.

As nearly everyone else was having cochino negro and mushrooms with papas bonitas crisps, we had to try that as well. If you’ve eaten it, you’ll know why good cochino negro (black pig) is so prized on Tenerife. It’s a fabulously tasty meat and cooked in its own fat as it was at El Patio just intensifies its flavours.

As a complete contrast to tucking into the local livestock, we went veggie and tried the lasagne. Again lots of fresh ingredients from the finca paired up with an intense tomato puree and strong and savoury goat’s cheese from La Gomera. Once again the freshness of the ingredients stood out, giving the food an extra zest you don’t get with mass produced ingredients. 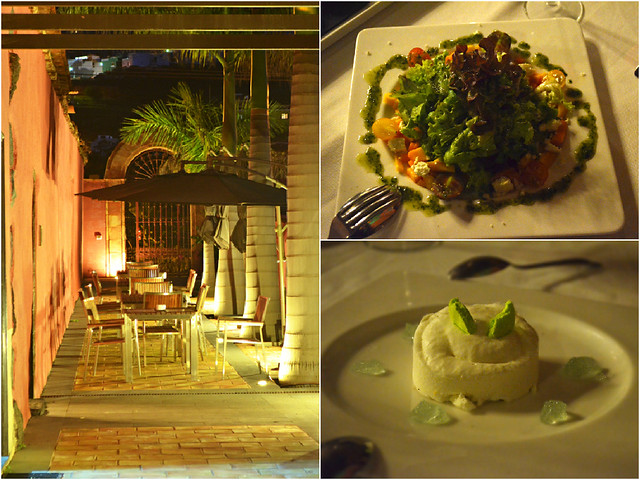 Adrian likes to have a bit of fun with his food which is why there was a dessert that sounded like a refugee from the drink menu – Gin and Tonic.

And that’s exactly what it tasted like, a gin and tonic flavoured pudding.

You’ve got to love a place that bookends a meal with warm homemade bread and a gin and tonic dessert. That’s class.

Once you learn that Finca El Patio also hosts wine tastings, themed gastronomic evenings with guest chefs and jazz concerts you begin to wonder why, if not exactly a secret, we don’t hear more about it.

Restaurant Finca El Patio, Calle Jardin 13; Los Realejos; (+34) 680 994 161; opening hours – now that is a bit of a secret. Better to phone and make a reservation or send an email to restaurante@fincaelpatio.com