You know that feeling, when the last day of your holiday looms and you head to the beach or the pool, feel the warmth of the sun on your skin and wish you could stay forever? I think the first time that we were really aware of being on the ‘right’ side of that feeling was the first time we took visitors back to the airport for their return flight while we jumped in the car and drove back home. It’s hard to describe just how good that felt.

But being on holiday, and living in a destination, are two very different experiences, especially when you have to try to earn a living, as we found out when, in 2003, we walked away from everything we had ever known to set up home in Puerto de la Cruz in the north of Tenerife.

For anyone who has ever dreamed of doing the same – leaving grey skies behind and making a new life for themselves in the Canary Islands – The Banana Road is a must-read. From buying a house, meeting the neighbours, and getting to grips with the wildlife to trying to earn a living on an island where business practices can be decidedly shady, you’ll discover the good, the bad and the downright bizarre of settling into Paradise. 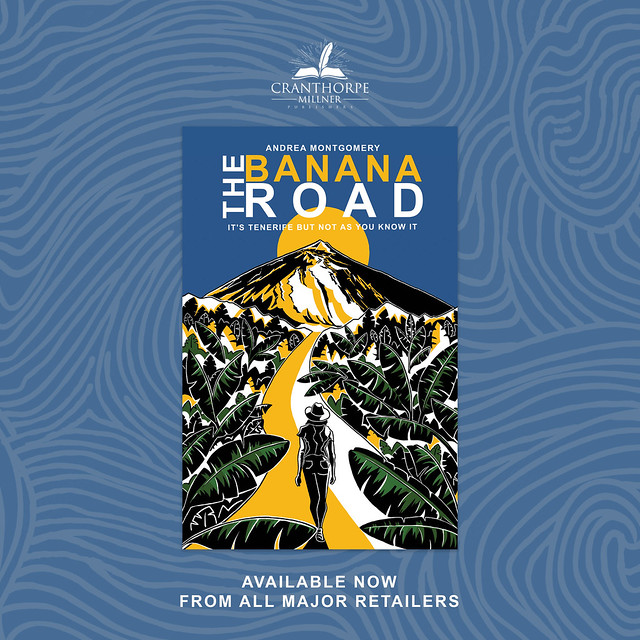 When Andy and Jack walk away from their successful careers, leaving family, friends and Manchester to move to the Canary Islands, they hope to find a new adventure and quality time together in the sun. What they do not expect to encounter is the intriguing, often amusing and sometimes downright bizarre cast of characters that inhabit their new, sub-tropical world.

Buying a small house on a pitch ‘n’ putt golf course surrounded by banana plantations in the north of Tenerife, they set about trying to earn a living while getting to know the eccentric neighbour who hints at a double life as an espionage agent; the Disney Gang; and a white cat with no tail, an Eric Cantona attitude and a penchant for torture. An arrest and a sudden death turn their world upside down and open the door to a series of seemingly unrelated incidents. As Jesus takes up residence in the bottom of the garden and paradise begins to unravel, the shocking truth is finally uncovered and Andy and Jack face losing everything.

A sneak peek or two:

‘Just like that, almost our entire life savings were gone, and we were the new owners of a house on a pitch ’n’ putt golf course, in the middle of a banana plantation, at the foot of Spain’s highest mountain.’

‘Both Whiskas and I stare incredulously, me from the front door, Whiskas from over his shoulder, halfway down the passage, as Jack runs to the gate and blasts Whiskas with the water. The last we see of him that night is a white blur being swept down the passage like a Parisienne student on the end of a police water cannon.’

What they’re saying about The Banana Road:

“The Banana Road is an engaging and lively account of what it’s really like to up sticks and move to Tenerife. A fascinating cast of characters, both human and animal, make for an entertaining read that will appeal to anyone who’s ever drifted off in the sunshine dreaming of extending their holiday on this subtropical island.”
Helen Ochyra, travel writer and author of Scotland Beyond the Bagpipes

‘Andrea Montgomery is inspiring, bold and courageous in her life and in her writing. This is a remarkable story, told with wit and warmth. You won’t be able to put ‘The Banana Road’ down once you start it.‘
Helen Mort, author of Black Car Burning

“Discover the Real Tenerife as the author takes you on their day to day escapades living abroad on the largest of Spain’s Canary Islands. A must read for those considering a move and new beginning in a foreign unfamiliar country. A realistic yet witty and fun account of getting settled, meeting the locals and earning a living to survive in this new unchartered territory. The author makes you feel like you’re along for the ride, experiencing their journey with them!”
Robert Tellier, Travel Blogger @ gr8traveltips.com

Pick up your copy of The Banana Road in your local book store (in the UK) or from any of these online retailers: