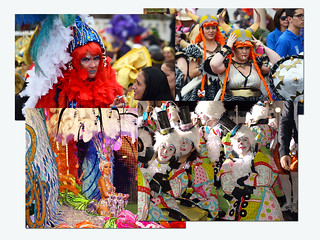 There are hundreds if not thousands of articles and pages about carnival on Tenerife (or carnaval as it’s called here). We can confidently say The Real Tenerife’s is different.

We’ve notched up first hand experience of carnival across Tenerife, watching numerous opening and closing parades and high heels drag marathons; we’ve regularly donned fancy dress for all night street parties and worn widows garb to join in the Burial of the Sardine processions; we’ve been backstage at the Gala for the Election of the Carnival Queen and interviewed a bleary-eyed but beautiful newly elected queen in the grounds of the Hotel Mencey the morning after she was elected (she almost fainted she was so tired). We’ve even interviewed a carnival queen costume designer in a secret location in Santa Cruz as he worked on his latest creation.

When it comes to carnival, we’ve jumped into its hedonistic clutches many, many times. Our Carnival information comes from first hand experience and insider info. That’s why we know it’s different.

February 9, 2020 Jack About Tenerife, Carnival, Fiestas, Special Feature 0
At this time of year there are articles galore about carnival on Tenerife and many either get something wrong, or don’t paint quite the full picture of what carnival means on the island. […]

February 9, 2016 Jack Carnival, Fiestas, Life 0
We regularly say to people that carnival on Tenerife simply isn’t the same if you don’t wear some sort of fancy dress. […]

March 10, 2015 Jack Carnival, Culture, Fiestas 4
Some Carnival parades on Tenerife have a better atmosphere than others. The opening carnival parade in Santa Cruz has more energy and fun than the city’s… […]

February 24, 2014 Jack Carnival, Culture, Fiestas, Photos 0
Continuing our peek behind the scenes of carnival on Tenerife, after the costumes are designed comes the big night, the grand gala for the election of… […]

Behind the Scenes of Tenerife Carnival, Designing the Carnival Queen Outfit

February 19, 2014 Jack About Tenerife, Carnival, Culture, Fiestas 1
A couple of years ago we interviewed the king of Tenerife’s carnival queen costumes, designer Leo Martinez. Arranging to meet Leo was like arranging to meet a spy. […]