There were two things we learned during our last visit to El Calderito de la Abuela in the municipality of Santa Ursula. The first was that it has some quite special views along the north west coast of Tenerife, especially at sunset. The second was, if you wanted to enjoy those views, it’s wise to book in advance. El Calderito is an extremely popular restaurant at the weekend.

Part of a trio of restaurants owned by members of the same family (the other two being La Bodeguita de Enfrente and Donde Mario) El Calderito de la Abuela is the least attractive looking of the three, but only from the outside. However, it boasts the best position, clinging to the hillside overlooking the valley and the Atlantic Ocean. 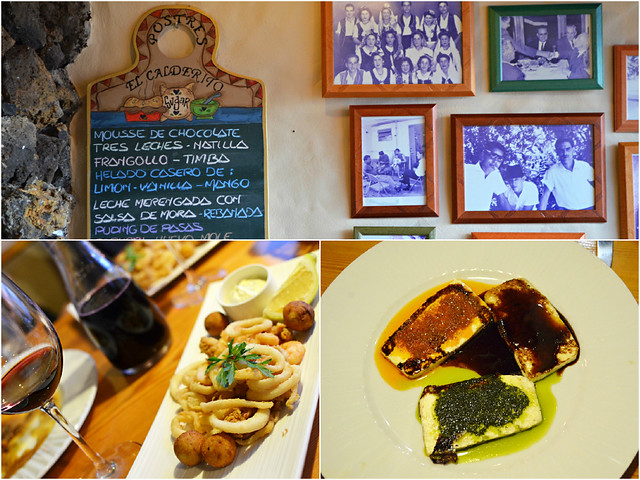 Once inside, it’s a different story; the décor is both rustic and imaginative with various memorabilia including old black and white photos, wine bottles around the lights and lining the wooden ceiling and the odd pumpkin lying casually around. The seating is in various nooks and crannies to make dining feel intimate, even though the restaurant can accommodate a decent number of hungry diners. Prime position are the window seats. Even though we booked for 8pm (early by Canarian standards) we were too late for the window booths. These were taken by a mix of local families, couples and residents/visitors of varying nationalities. This small area in the hills above Puerto de la Cruz buzzes at the weekend.

As well as having an attractive atmosphere that is instantly welcoming and relaxing, the menu at El Calderito de la Abuela manages to mirror the décor in that it is definitely traditional, but it’s also got a bit of flair that makes it stand out from other trad restaurants. It’s a good choice for unadventurous diners as well as those who like something a little bit different.

The Food at El Calderito de la Abuela
The menu is one of those which has too many things I could happily devour. So lots of humming and hawing and last gasp decision making as the waiter worked his way through Andy and my mum’s orders.
Last time we’d had a great tasting, fried seafood plate which consisted of squid, mackerel croquettes, prawns and even battered shark (told you it was a bit different) and though I was tempted to repeat the experience, I wanted to try something different. 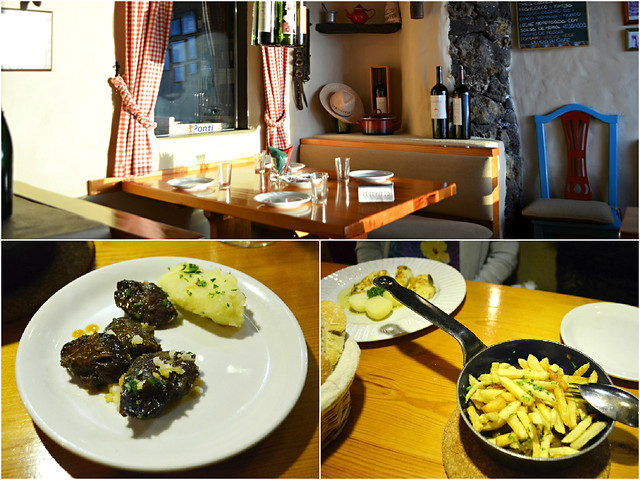 My mum’s main course was a straightforward cherne (stone bass) with boiled potatoes; a good choice for those who fancy fish without the worry of bones. Andy tried la carne en salsa de la abuela (I suppose the shortened English version would be ‘granny’s stew’) – slow cooked, tender beef chunks with green beans in gravy and covered by chips. My choice wasn’t a million miles away from ‘granny’s stew’ but instead of beef, my melt-in-the-mouth chunks were black pig cheeks; a local speciality. Both were served in their frying pans which was a quirky touch that was practical and looked good. 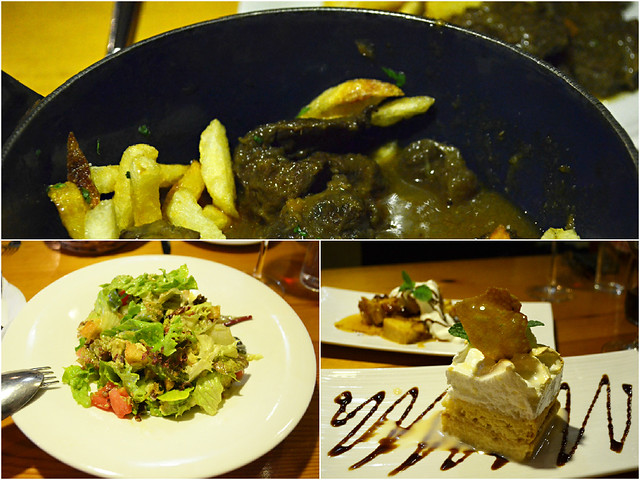 We were too full for a pud, but that didn’t stop us ordering a couple anyway. We’d had puding de pasas before and knew it was a tasty bread pudding type affair. For some reason I also ordered a postre I wouldn’t normally have considered, tres leches (three milks), as I’m not a fan of milky puds.

I’ve no idea what little voice prompted me to go for that pud, but I’m glad it did. The tres leches was exceptionally good and not milky at all, more like a fluffy, creamy cake. It was as light as a particularly yummy cloud.

Thanks to early evening cloud cover, the sunset wasn’t as spectacular as our last visit. The food on the other hand was every bit as enjoyable.

Vineyards on Tenerife, Lunch, Wine and Sex at Bodegas Monje

Just about every visiting travel writer gets taken to Bodegas Monje, subsequently it’s the Tenerife vineyard which gets most mentions in travel articles… […]