Overall
The Sandos San Blas is a Tenerife hotel which is quite unlike any other Tenerife hotel. It looks luxurious, has a strong connection with local culture, and has bags of unusual features. 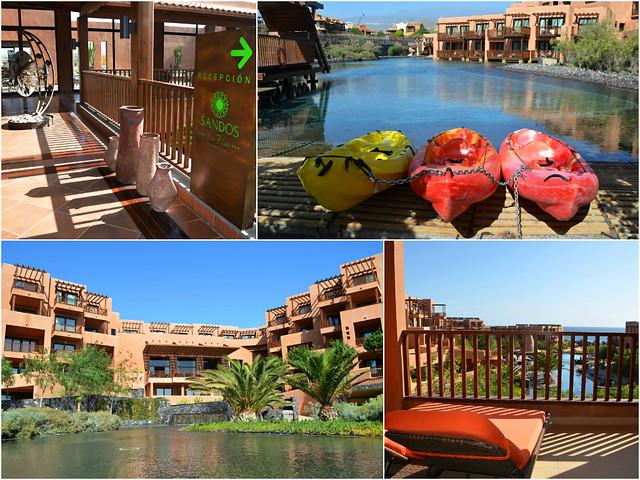 Where is the Sandos San Blas?
The Sandos San Blas sits on Tenerife’s sunny south east coast. It almost joins Golf del Sur (or is that Costa San Miguel now?) with Los Abrigos. On one side you’ve got a traditional fishing village with great restaurants, on the other a purpose built golf resort with a marina – both a few minutes walk away. Outside the entrance is one of the nicest little walks in the south of Tenerife. And the airport is so close you could almost walk from it (there’s not a problem with aeroplane noise before you ask).

What is the Sandos San Blas Like?
The Sandos San Blas looks a bit like a cross between a Mexican hacienda and one of those North African desert cities. It’s a look which we really liked; it fits with the arid surroundings. I sometimes judge a hotel’s ‘interest’ factor by how quickly I run out of things to photograph. The San Blas has a sky high ‘interest’ factor; from the colonial courtyard entrance with contemporary iron works of art to Tatooine type dining areas and a moated modern restaurant. The hotel, like its many water features, flows down the hill from the San Blas Barranco till it reaches the coast and a tiny man made beach area.

Water features highly in the hotel’s design, you’re rarely out of earshot of a calming trickling sound. There are a series of beautiful pools, including an infinity, with plenty of sunbathing spots. Some wicker ‘double’ loungers come with convertible hoods, giving them a sort of pram look – handy for protection against the sun or the breeze which often blows along the east coast. The most attractive water feature is a small lake with kayaks. 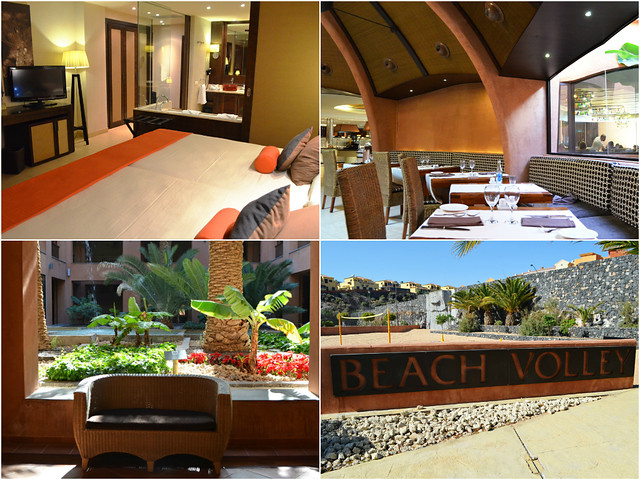 It’s a good hotel for anyone that wants to stay active on holiday without having to travel outside their hotel. Apart from a gym and spa there’s a beach volleyball court, tennis courts, bikes for hire, a climbing wall, Segways, shop and an imaginative children’s playground. The hotel is keen to promote local culture and subsequently there is an interactive museum about life in the area as well as a courtyard garden with labelled indigenous plants – many plants around the grounds are labelled. Best of all is the walk around the San Blas Nature Reserve immediately outside the hotel. The route in the San Blas Barranco is one of the most enjoyable and interesting short(ish) routes we’ve walked in the south of Tenerife. You can either do it on your own (free for guests) or go with a guide (€7 guests €15 for non guests) which, if you don’t know Tenerife and its history, adds a lot more depth to walking the route.

What are the Bedrooms Like?
Simply put, the room we had was one of the most attractively stylish bedrooms we’ve stayed in on Tenerife. Chic, sexy and contemporary it was a hotel room for people who like their hotel rooms to have a sultry personality; the sort of room that’s finished off perfectly by having a dry Martini in hand. Stand out feature was a glass bathroom (with sliding wall for anyone not comfortable with the fish bowl feel), but the whole bedroom was a palace of good taste, sleek furniture and imaginative designs, all effortlessly matching the Venetian red and dark chocolate colour scheme.

The room had all the mod-cons (flat screen TV with channels to suit multitudinous nationalities, including BBC1 and ITV), hairdryer, mini bar and free wifi (poor signal) plus a big private balcony with views that followed the flow of the swimming pools down to the sea. In case you haven’t picked up on it by now, we thought it was an exemplary hotel room. 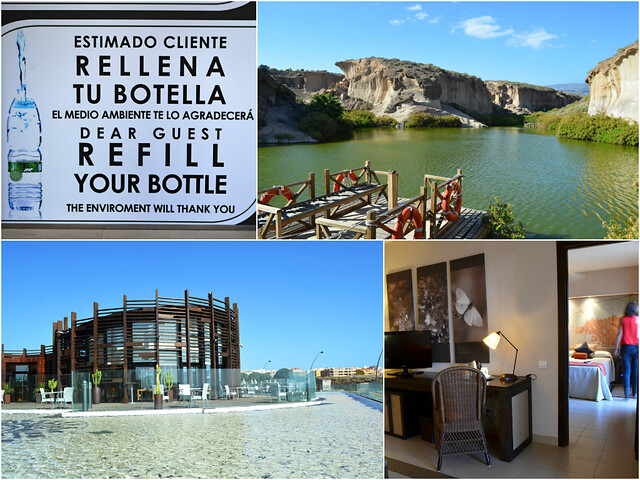 How Good is the Food?
We didn’t try the gourmet restaurant so can’t comment on that. Where the hotel oozes 5 star luxury in the looks department, the food on offer at the buffet didn’t match the rest of the hotel’s high standards. For me it wasn’t imaginative enough and although there were meat, fish and pasta dishes, there didn’t seem much diversity of choice between lunch and dinner. Views on Tripadvisor seem to vary on this point. There are those of the same opinion as us, and there are others who were more than satisfied with the quality of the food and variety of choice.
There was plenty of choice at breakfast with a good selection of hot and cold dishes, cereals, fruit, yoghurt etc. What I particularly like about the main dining room was that it was split into smaller circular rooms, some adults only, which made dining feel a bit more intimate.

One surprising aspect for a 5 star hotel was that there wasn’t much of a choice of wine. As the bar area was full to overflowing (some nice live sax possibly the culprit), we decided to buy a bottle of wine and take it back to the room (no hardship). That was easier said than done. We succeeded but it required the help of reception staff and a phone call to find out what wine might be available. Having no wine list in a luxury hotel is quite bizarre.

Where the Sandos San Blas really scored highly was in its approach to the environment. Rather than grab a new plastic bottle of water every time they wanted one, guests were encouraged to refill bottles from fountains placed at various points around the hotel. 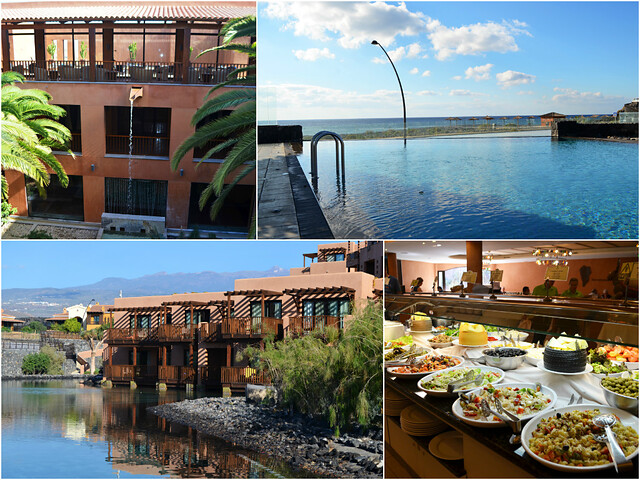 What is the Best Thing About the Sandos San Blas?
It looks absolutely fabulous. I loved the design of the hotel and the fact that water played a major part in features. But best of all was the way in which the Sandos San Blas promotes the culture and history of the area. It’s a hotel that doesn’t stand aloof from the place its located. With the museum, labelling of plants and the San Blas Barranco, there’s no excuse for guests not learning something about the destination they’ve visited.

Who Would it Suit Best?
The range of activities makes it ideal for families similarly the hotel’s style is also ideal for couples looking for a romantic place to stay.