One of the things that surprised us when we moved to Tenerife was finding out Santa Cruz had a Rambla just like Barcelona; a tree-lined avenue that cuts through the city where you can stroll hand in hand in the dappled shade, stopping every so often to partake of refreshments (i.e. have a beer).

The differences between the one in Barcelona and the one in Santa Cruz are A) Tenerife’s La Rambla isn’t jam packed with tourists, B) you don’t have to keep an eye out for pickpockets in the crowds and C) there are no gangs of marauding drunks on a stag or hen night at the weekend. 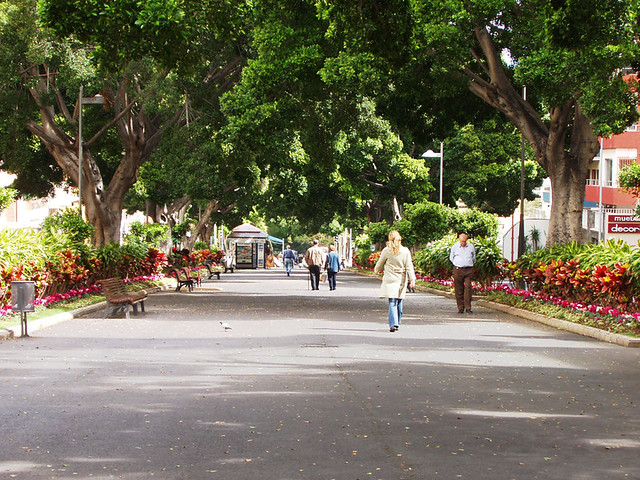 Okay, there are a few other differences in Barcelona’s favour (Gaudí buildings, the fantastic La Boqueria market and so on) but La Rambla in Santa Cruz isn’t lacking in history and culture. Most of the exhibits from the 1st International Street Sculpture Exhibition in 1973 line the route, making it something of an open air art gallery.

The avenue runs right across the city from the TF5 autopista, curving east until it arrives at the coast. There are sculptures to spot almost right from the starting point, beginning with a trademark industrial looking piece from Tenerife artist, José Abad. 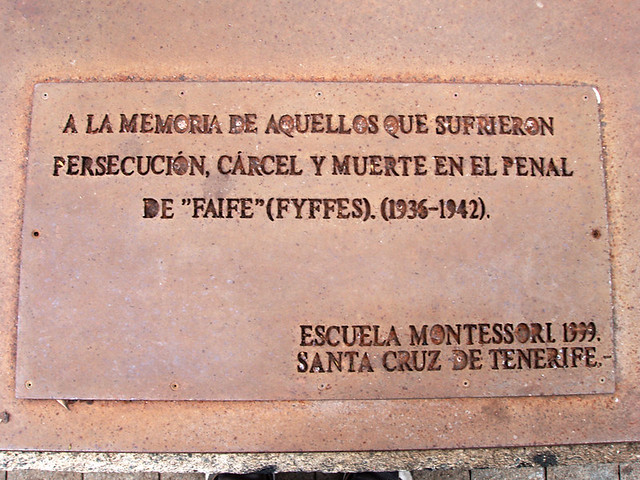 La Rambla widens after Abad’s work, becoming lined with petunias and Indian bay trees that create dappled shade as the route passes Maria Simon’s ‘Man’ before arriving at an understated triangular sculpture by The Montesori School. This piece is in memory of islanders who suffered imprisonment and death at the Fyffe’s warehouse during the Spanish Civil War; a solemn reminder life on a paradise island hasn’t always been rosy.

From understated to you can’t miss it if you tried. I can’t say Francisco Sobrino’s red, twelve metre high ‘Movil’ in the centre of Plaza de La República Dominicana is my favourite work along the route. It’s too gangly and awkward, but it’s a good landmark for pointing the way to CD Tenerife’s football ground.

Close by is Parque Viera y Clavijo which should be a highlight of the route as it boasted a Joan Miró work,‘Femme Bouteille’. But controversy and shenanigans regarding the restoration of the park over the last few years has meant that the sculpture is a bit of a nomad and can shift position around the city. 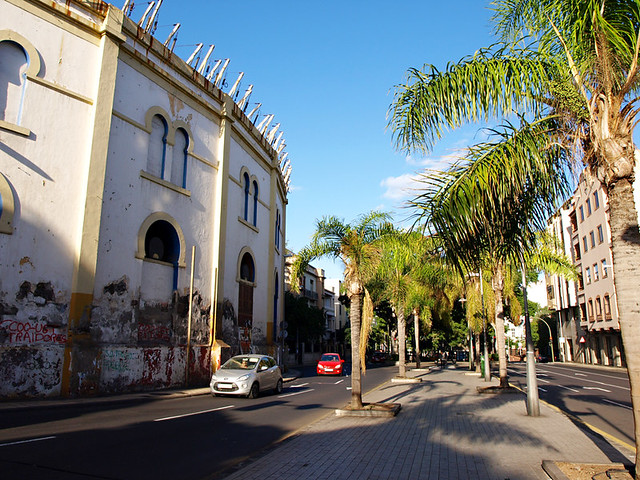 The café beside Plaza de la Paz, named to commemorate the end of the First World War, is perfectly placed for a coffee break and a rest. This section of La Rambla is full of history, but sadly some of the iconic landmarks have disappeared or changed beyond recognition in the last decade.
One that remains a terrible waste is the bullring at Plaza de Toros. It was built in 1893 but Tinerfeños didn’t take to the sport and there hasn’t been a bullfight there since the fifties. The bullring was used as a venue for concerts and rallies and should be one of the city’s main features. However, ownership lies in private hands and it’s been closed for over ten years. The last time I passed, it was a dilapidated mess. 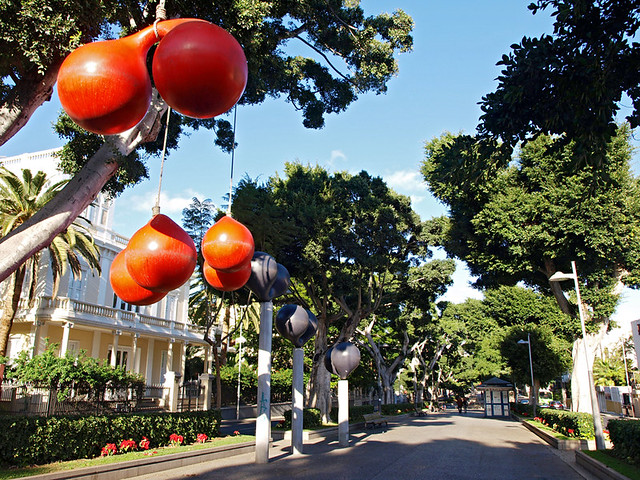 After the depressing vision of the bullring, things brighten up with the sight of  Xavier Corbero’s balls, also known as ‘Ejecutores y Ejecutados’, swinging from the trees.

Almost immediately afterwards is the main attraction on the route, courtesy of Britain’s most prominent sculptor of the 20th century, Henry Moore. Reclining figures and fallen warriors were a favourite theme of Moore’s and ‘Guerrero Goslar’ encapsulates both. Graceful lines and undulating curves shine on even the dullest days. 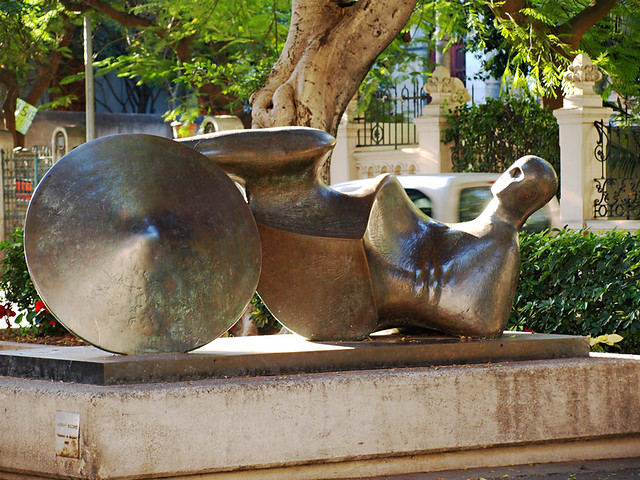 A detour to Parque García Sanabria, which runs alongside La Rambla, is essential at this point. The centrepiece is ‘La Fecundidad’, a voluptuous nude female figure bathing in the park’s fountain – in the right light you can see a rainbow dance across her generous thighs. The most playful work in Parque García Sanabria is ‘Monumento al Gato’ by Oscar Dominguez.  Dominguez, who grew up in Tacoronte, was an artist in the grand tradition of troubled geniuses with a passion for wine, women and bullfighting; at 25 he painted a self portrait depicting the veins in his arms slit open; 27 years later life imitated art when he committed suicide. 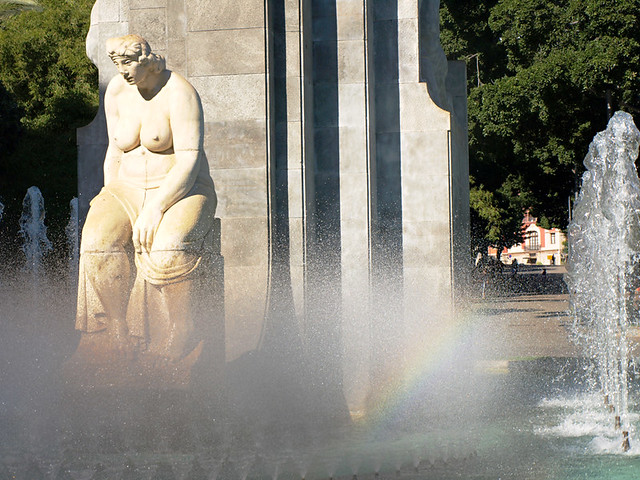 Opposite the Grand Mencey Hotel, an untitled statue by Feliciano marks the last stage of the trail. In front of the College of Architects is ‘Lady Tenerife’ by Martin Chirino. Chirino was inspired by Guanche designs, their influence evident in the figure’s swirling outline. 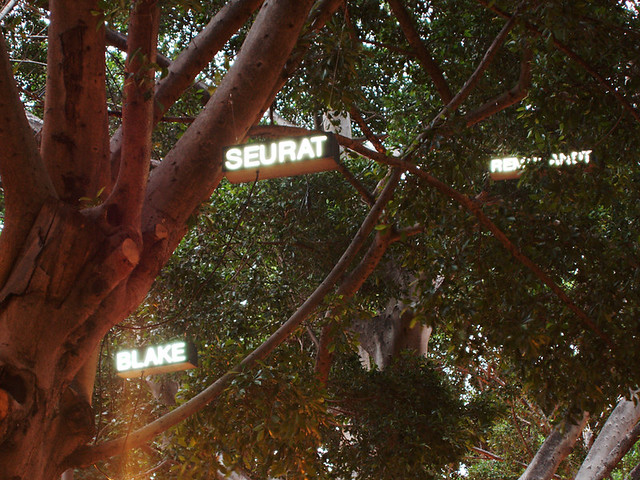 La Rambla ends at the coast with one of my favourite works on the route. Jaume Plensa’s ‘Islas’ is missed by many strollers who don’t know La Rambla as it’s hidden amongst the trees and not easily noticed in daylight hours. As dusk falls the leafy canopy lights up with the names of a host of revered artists.

It’s a simple creation with a magical charm that puts a smile on my face; a nice way to end a stroll in Tenerife’s friendly capital city.