Overall
It’s the Hard Rock Hotel. Unless booking from a jungle hut where you’ve been living as a hermit for the last couple of decades, you should have an idea what to expect from a brand which is famous throughout the world – rock music, glitzy showbiz décor, and eye-catching memorabilia all over the place. And that’s exactly what you get. But as this is the Hard Rock Hotel rather than Hard Rock Café that leaves a lot of room for surprises, especially as there’s only one other of its kind in Europe. 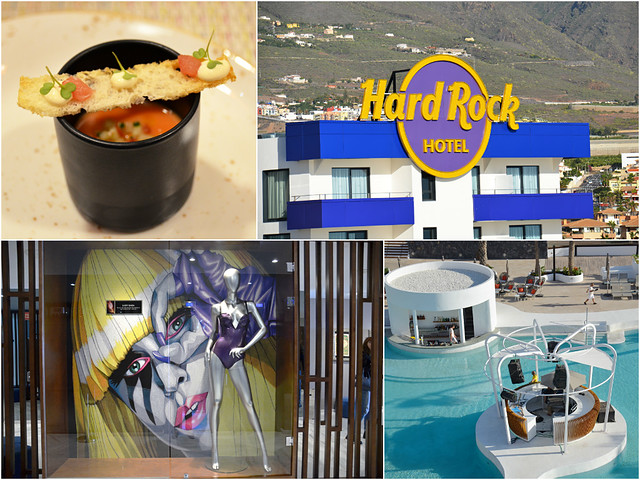 Where is the Hard Rock Hotel?
The Hard Rock Hotel towers above the centre of Playa Paraiso, a tired southern resort which had been somewhat left behind by near neighbours over the last decade… until the Hard Rock moved in. Located in the south west of Tenerife, it’s in one of the sunniest parts of the island. It’s only a few minutes to the TF1 autopista by car, 10-15 minutes to Tenerife’s tourist nightlife centre of Playa de las Américas and around a 20 minute drive to Tenerife South Airport. 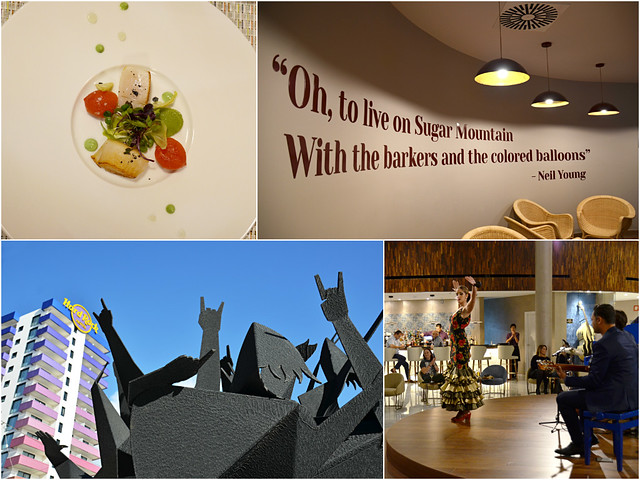 What is the Hard Rock Hotel like?
From the moment we entered the Hard Rock Hotel to be met with a vision of a carnival queen type costume which belonged to Elton John, followed by a glass of purple cava sipped to the strains of Bon Jovi, we knew we were in for a very different hotel experience. Music memorabilia and lines from songs adorn the walls whilst an electric blue piano takes centre stage in the main lounge. Retro album covers and photos of the Beatles in Tenerife line the corridor leading to the elevators for the Oasis Tower, one of two towers. The other is the adults only Nirvana Tower whose exterior glass lifts flash different coloured blocks after dark, like over-sized Tetris.

Two things stand out in the corridors leading to bedrooms, an ice machine (something lacking in most European hotels) and display cabinets with outfits belonging to various musical legends – e.g. Amy Winehouse, Tina Turner, Beyoncé. 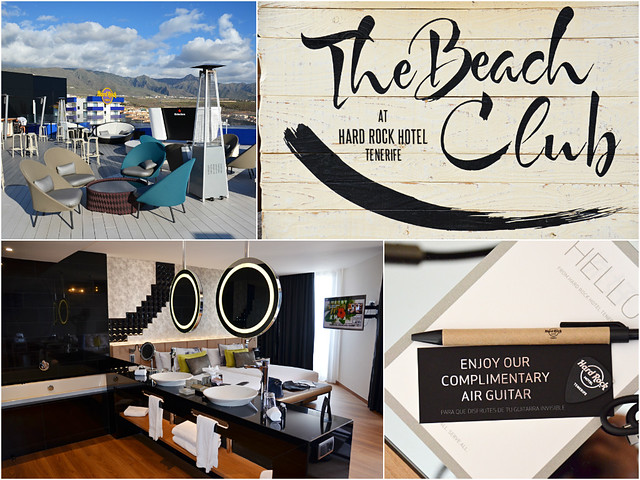 There are heated pools with bars for each of the two towers, Nirvana’s being adults only with a swim up bar whereas Oasis, as well as a main pool with a DJ playing a sunny soundtrack, has a fun and funky children’s pool complete with mini water slide and a couple of brilliant mock flamingos. The toddler’s pool leads to one of the best children’s play areas we’ve seen in a Tenerife hotel.

The star pool lies in what used to be a swimming pool complex in a cove below the hotel. Reached by a lift or stairs, it includes a lagoon-sized pool, restaurant, stage area for concerts, a private sandy beach and a swim up bar. Stylish and sexy, it’s one of the first signs just how much of a transformation Playa Paraiso is going through. 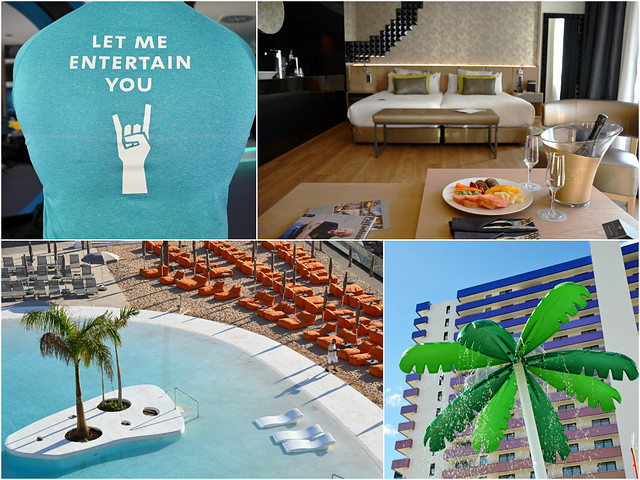 As you’d expect music is a big feature at the Hard Rock Hotel, with different tracks playing in different areas. Not keen on the sounds, simply move on. There are a number of bars and concerts are scheduled for various times throughout the year. When we were there the live entertainment was courtesy of a sizzling flamenco dancer accompanied by a couple of excellent musicians. Not exactly hard rock, but mesmerising stuff.

As an alternative to music, music and more music the Tex-Mex 3RD Half bar/restaurant screens sporting events and football matches including Premiership games. 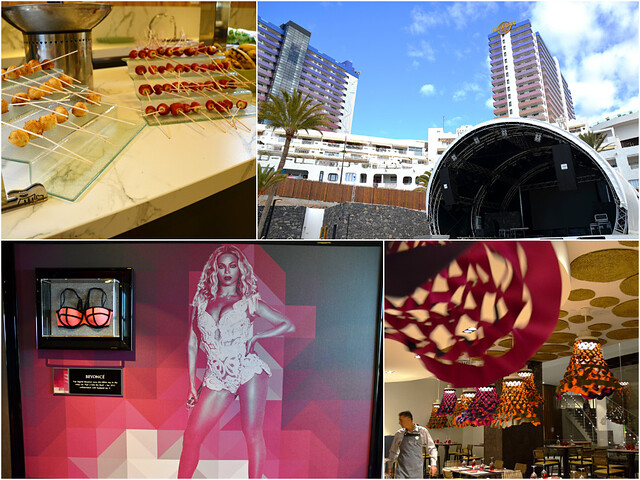 Romantically perfect for a pre-dinner aperitif is the 16th floor sky bar which has views along the south coast and La Gomera. On a mid December night the temperature was a bit on the cool side but heaters and blankets kept things cosy.

The hotel also has a very good spa (experienced first hand) and a state of the art gym (seen, but not tested).

What are the Bedrooms Like?
Suitable for a rock star? You bet. Sleek and chic, with sophisticated black, silver and mahogany colours, fast free wifi, comfy beds with plenty of pillows, sofas, mirror ceiling with star dressing room light bulbs, sockets galore, mini bar, wine cooler, big balconies and a partially open plan bathroom (twin sinks and bath tub – showers and toilets are behind black glass doors). If the open plan design sounds too ‘out there’, you’re not rock star material I’m afraid. 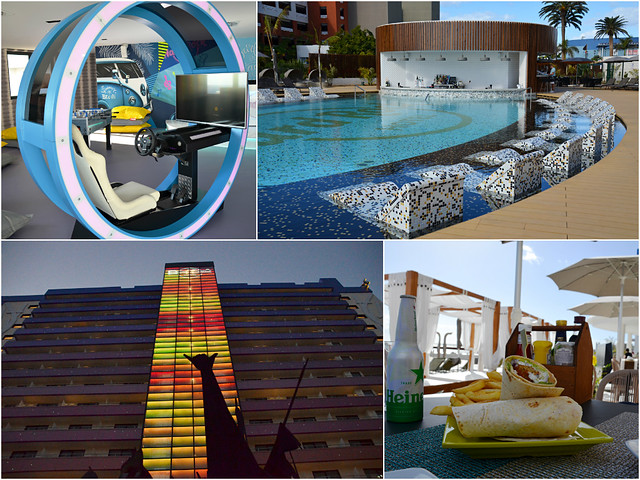 As well as looking the part there are loads of little quirks, such as a plectrum for playing your complimentary air guitar. I’m not going to give more away as the fun lies in discovering the little things for yourself.

How Good is the Food?
With a choice of pool snack bars; main buffet restaurant; American diner; steak, Japanese and Spanish restaurants there’s a variety of choice which should keep all but the fussiest eaters satisfied.

For lunch we shared tasty falafel wraps for two at the Oasis pool snack bar. Dinner at the Ali Olé restaurant included a selection of traditional and contemporary tapas dishes which were not far below a level of food we’ve eaten in some Michelin star restaurants. Apart from the food being good it was fun dining; low, spinning flamenco light shades adding a flamboyant obstacle for waiters to negotiate. 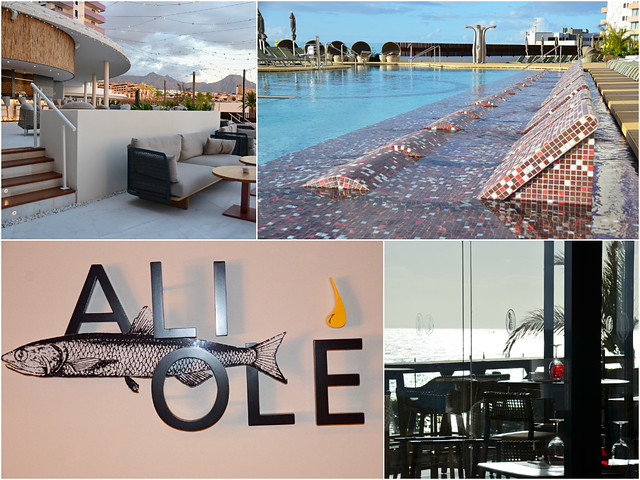 Breakfast ingredients included something I’ve not seen in a Tenerife hotel before, quail eggs. Apart from those, the choice was extensive with a good range of hot dishes, quality meats and cheeses, waffles, crepes, churros, pastries, cereals, yoghurts, health foods, juices and a chocolate fondue.

We were impressed with the choice and standard all round.

What is the Best Thing About the Hard Rock Hotel?
It’s fun, it’s different and it’s quality. We stayed there shortly after returning from a remote and tranquil part of Chile and initially the hi-tech style combined with loud music was a bit of a culture shock. Within an hour we’d adjusted, completely buying into what it was all about and lapping up the energetic vibe. Where else would you check out to the sound of Nick Cave singing Red Right Hand? 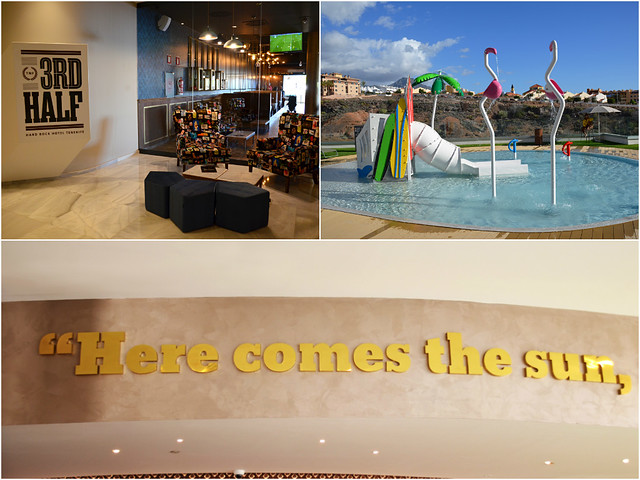 Who Would it Suit Best?
Music fans of all ages, and those looking for rock star style luxury rest and relaxation in the sun whether couples, families or friends.

Welcome To The Real Tenerife

To launch The Real Tenerife website, we thought it might be interesting to share why we felt the need for a website about the ‘real’ Tenerife. It’s for one very simple reason and all we need is a picture of a map of Tenerife to illustrate it. […]