Overall
For me there’s only one type of hotel which is going to fit in with a traditional centre like La Laguna’s old quarter, so perfectly preserved it has UNESCO World Heritage Site status, and that’s one in a building which oozes as much charm as the colonial buildings around it. Although I like the historic, I’m less a fan of the stuffy, oppressive décor you can occasionally find in historic hotels. Thankfully La Laguna Gran Hotel combines both the old and the contemporary seamlessly – making it a sophisticated and stylish hotel which maintains a respect for the past, creating features out of its history. 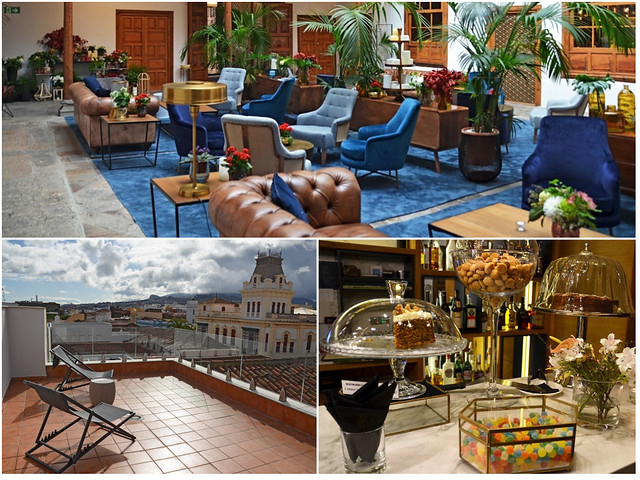 Where is the La Laguna Gran Hotel?
It’s located a short distance from Plaza del Adelentado, so although in the heart of La Laguna’s historic centre it’s also near the city’s ring road. This means no need to negotiate the narrow and busy streets if arriving by car (the hotel has it’s own underground car park). Most of La Laguna’s highlights are a short stroll away, as are atmospheric and quirky traditional and contemporary restaurants, shops, and cool cafes – La Laguna is a university city, a factor which adds youthful vitality to the place. As La Laguna is located at around 600m above sea level, in winter months the temperature is considerably cooler than at the coast. This is definitely not a destination for those seeking a stereotypical beach and resort type holiday.

What is the La Laguna Gran Hotel like?
The design is what you could call contemporary colonial – the elegant lounge which greets visitors has plush blue carpets and low leather sofas in the centre of a covered courtyard around which runs a traditional Canarian wooden balcony. Skylights make it both as bright as being outside but protect from cool winds and potentially pelting rain. Adding extra light are glass and copper ball shades – ultra-modern yet made me think of Jules Verne’s 20,000 Leagues Under the Sea. This marriage of classic colonial and modern design features throughout the hotel. 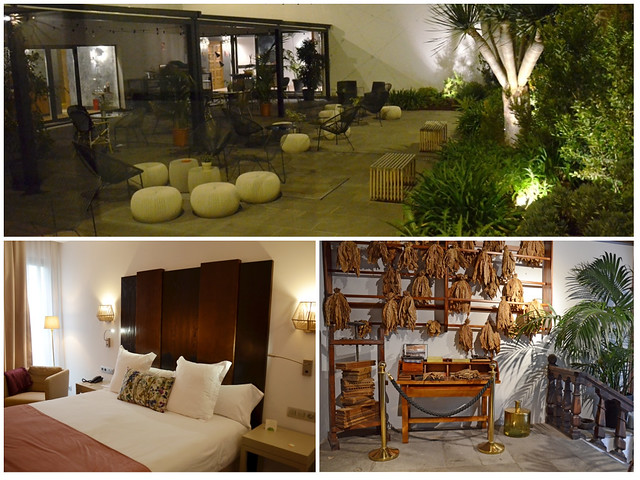 To one side of the lounge is a small display of tobacco leaves, a nod to the building’s past as a tobacco drying warehouse. To the other is a smart, cosy bar; ideal for a pre-dinner cava (which is how we used it).

On the roof is a swimming pool, gym and sun deck area. When the weather’s friendly it’s a scenic spot in which to sunbathe. At other times the views across the historic skyline and to Anaga still make it worth spending time on.

What are the Bedrooms Like?
Rooms are good-sized and quietly tasteful – pale pink or soft silver drapes and bed throws, fluffy pillows, large flat screen TV, free wifi. Ours had a small terrace with table and chairs overlooking an internal courtyard, but wet January weather kept us from using it. Bathrooms are spacious and stylish. There was no real wow factor to the rooms; however, they were extremely comfortable (the most important thing to me) and a nice space to relax in. 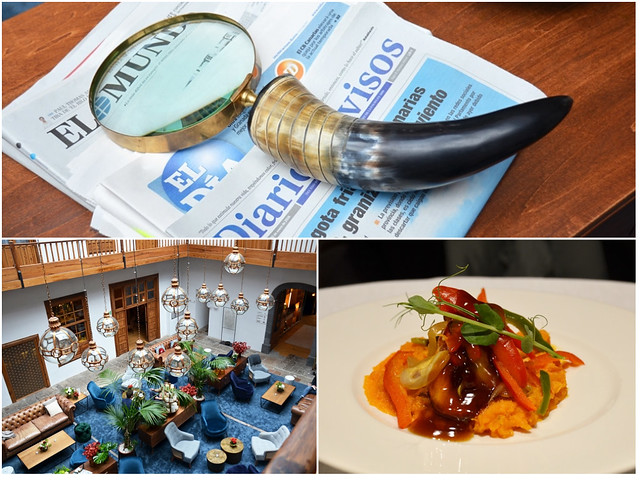 How Good is the Food?
We had some trouble finding the dining room, and I’m still not sure we discovered the quickest route. The two ways we tried involved following a corridor till we found a lift which deposited us near the dining room; with the other  we crossed a little open courtyard with tables and chairs where there was an unusual wall feature covered in bejeques (house leeks), another nod to La Laguna’s character. It’s an attractive area which must really come into its own during warmer months.

Breakfast consisted of a small, but very varied buffet with good quality products and plenty of choice (both hot and cold) including Canarian specialities. Dinner was equally impressive and excellent value – €15 for a three course meal consisting of updated typical Canarian dishes.

The La Laguna Gran is also home to the latest addition to Tenerife’s wealth of Michelin star restaurants, Nub. A delay in it opening meant we missed trying it by a couple of days. 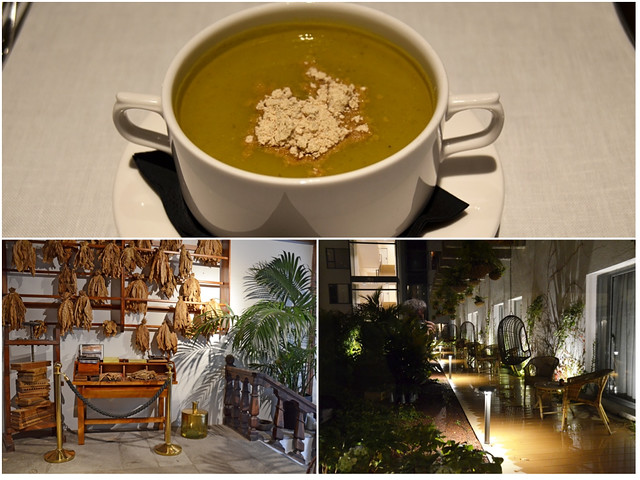 What is the Best Thing About the La Laguna Gran?
It’s a beautiful, classy and extremely comfortable base from which to explore one of Tenerife’s most appealing traditional centres; exactly the sort of hotel I’d choose in a city known for its colonial architecture.

Who Would it Suit Best?
This is a hotel for Slow Travellers – people who visit places for the culture, traditions, history, architecture, and gastronomy as much as its weather. La Laguna is an ideal location for a short city break, and as such the hotel is probably more suited to couples than families.