How many vineyards do you think there are on Tenerife?

A wine map of the island I picked up years ago lists over 70. Another source lists over 120. In reality there are probably more, most of them cottage industry sized. I read that 22 bodegas produced 70% of Tenerife’s wine.

How many of them are the sort of places where visitors can just turn up, have a look around and a tasting and maybe even a bite to eat?

That cuts the number down significantly. But there are some. 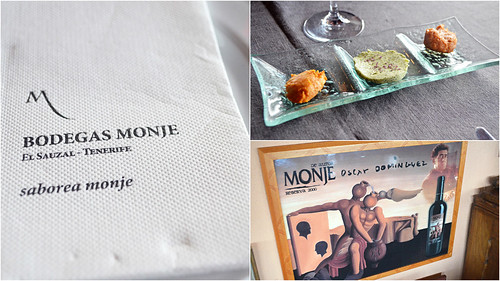 The most famous is Bodegas Monje. Just about every visiting travel writer gets taken to Bodega Monje, subsequently it’s the Tenerife vineyard which gets most mentions in travel articles, especially as they also throw Wine & Sex nights (more of that later).

There’s good reason why visiting journos are taken to Bodegas Monje. Importantly the wine is extremely quaffable. But Bodegas Monje also has ‘the right stuff’ .

There are lots of excellent bodegas on Tenerife, but most don’t match the romanticised vision of a sun-kissed vineyard with rows of green vines, heavy with plump grapes in front of a quaint stone building with the odd French oak barrel lying about the place.

Bodegas Monje comes close. It sits on the hillside 600 metres above sea level in El Sauzal. Helping its cause are some of the best views you’ll see of Mount Teide, framing the vine clad slopes. It’s not particularly easy to find, lying off the beaten track, which does it no harm in the exclusivity stakes. 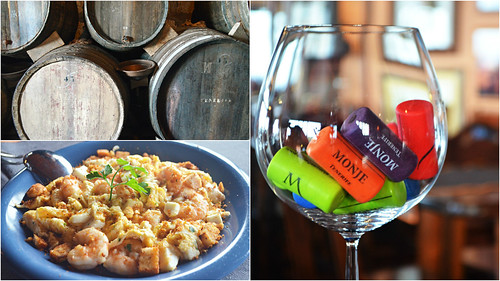 It was the place we turned to when a visiting filmmaker friend said he wanted footage of wine, vines and the like.

The Restaurant at Bodegas Monje
After a morning spent in La Laguna we turned up at Bodegas Monje just in time for lunch. One of its attractions is that it boasts a restaurant with panoramic views along the north coast. It’s a nicely decked out restaurant, with prints of the Monje family as well as some engagingly interesting posters of local surrealist Oscar Domínguez. It’s worth a visit for the restaurant alone.

The menu consists of slightly creative Spanish and Canarian dishes. Get there between 10am and 12.30pm and there’s a breakfast menu consisting of five combinations, one of them the very Canarian sounding leche y gofio.

We opted for a shared combination of a variation of pulpo a la gallega, croquettes with sweet jam and revueltos (basically scrambled eggs) with prawns, goat’s cheese and croutons. 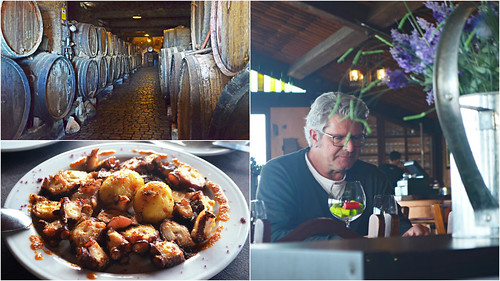 Obviously there had to be wine involved, three of us opting for generous and silkily smooth glasses of different Monje reds – Hollera, Tradicional and Tintomonje; all easily identified by their different coloured labels and corks.

It was a wonderfully relaxing prelude to a tour of the vineyard.

Bodegas Monje Cellars and Tour
Modern wine production involves gleaming steel vats which might be practical but aren’t in the slightest photogenic. Bodegas Monje has a proper old school wine cellar which is dark and musty with rows of aged oak barrels, some draped with spider webs. It might be a bit of a show-piece cellar but it works for me.

The Monje family have been producing wine for five generations with the El Sauzal vineyard being established in 1956. The family originally come from northern Spain, although if you meet the tall gregarious Felipe Monje with his shock of silver hair you could be forgiven for thinking there might be a touch of the Irish in there as well. 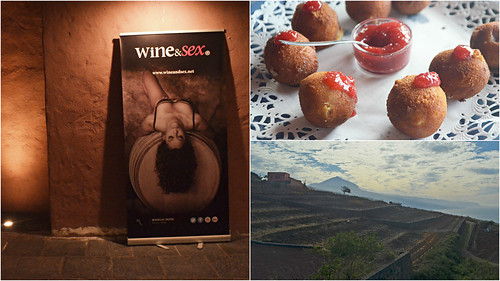 The main grapes grown are the Tenerife classics, Listan Negro, Listan Blanco and Negramoll, all still tended by hand thanks to the steepness of the slopes on which they’re cultivated.

The tour involves the old cellar, the new cellars, a film showing the process from growing to drinking and ends in the salon where theme events like the Wine & Sex nights are held. It might sound risqué but in reality it’s a dinner with a burlesque type show. It looks like good fun… and one night we might actually work up the nerve to go.

It certainly adds a spicy element to a tour of vineyard that you’re unlikely to find anywhere else.