Overall
The Hotel Tigaiga is a very Puerto de la Cruz type of hotel. By that I mean it’s as much part of the town as the harbour and Plaza del Charco. It was built by Enrique Talg in 1959 but the story goes back a bit further than that. It’s a family run affair with ties which stretch back to the halcyon days of tourism when there was still the spirit of adventure about visiting islands off the coast of Africa. That’s not to say it’s a hotel which is stuck in the past. The Talg family have been and continue to be pioneers in tourism in the north of Tenerife. The Tigaiga’s heritage may be one of old school holidaying, but it’s also one of the most switched on hotels on Tenerife when it comes to IT and social media. 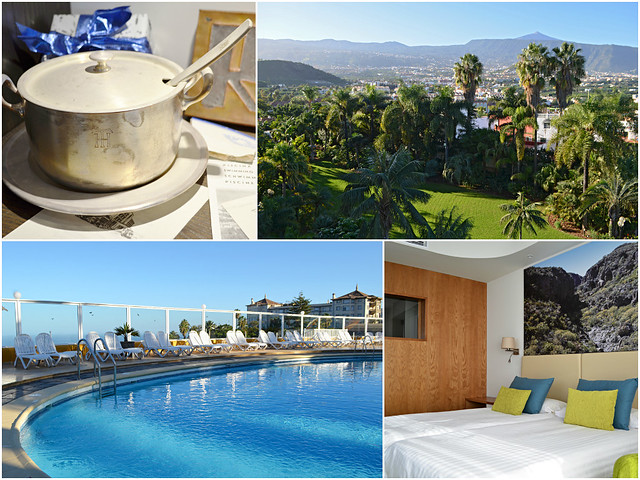 Where is the Hotel Tigaiga?
The Hotel Tigaiga is located in Parque Taoro above the centre of Puerto de la Cruz, just off to one side of the former Taoro Casino. It’s a tranquil residential area where it feels as though there are as many gardens as houses. Directly outside is Parque Taoro, public gardens which are a favourite place for joggers. A short walk away are the Risco Bello water gardens. To reach the centre of town involves a descent through the delightful Taoro water gardens where there’s also a café/restaurant. It’s about a fifteen minute stroll to the centre, a bit longer on the upward return journey. Basically, the Tigaiga is in a good position for being close to the heart of Puerto de la Cruz but far enough away for people who like to escape the hustle and bustle of a busy town.

What is the Hotel Tigaiga like?
The exterior of the Tigaiga looks very much like an average small 1980s hotel, it’s only once you step through its entrance you start to get a feel for what the hotel is all about. The interior, recently renovated, is light, bright and conservatively modern – furnishings and colour schemes are generally in tasteful apple greens and powder blues (symbolising the sky and the land) with the occasional sultry dark chocolate thrown in. It’s a style which is neither too contemporary for older, returning guests nor too fuddy duddy for younger first timers. This seamless blend is evident throughout. For example the lounge area, with its comfortable chairs and bookcase, looks like a tasteful but standard hotel lounge. But on closer inspection one long white desk features pop-up screens; a discreet internet corner. 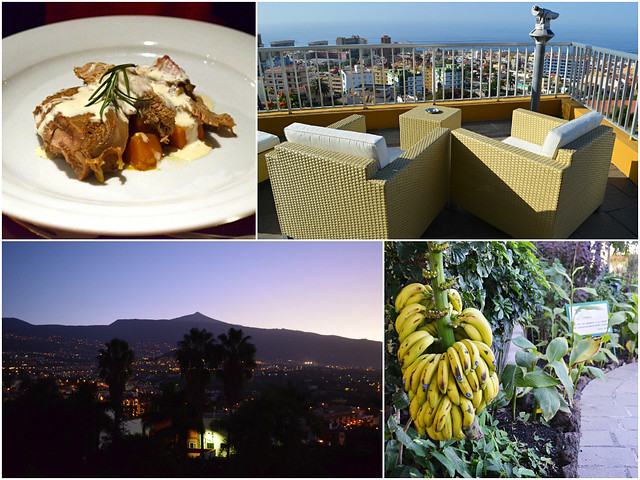 Because the Tigaiga sits above the town, the heated swimming pool and sunbathing areas have uninterrupted views of the sea; the town below simply doesn’t exist from the sunloungers dotted around its curved shape. Look inland and you’re treated to the emerald spine of the island drawing your gaze to Mount Teide towering above the Orotava Valley. This is sunbathing with wow views attached. There’s a small sauna below the pool where you can sweat it out whilst enjoying vistas over Puerto’s rooftops and out to sea.

At night there is live entertainment in the rather stylish bar. It’s one of the better hotel bars as it actually looks more like a bar than an extension of a lounge. When we were there the entertainment was courtesy of some quite decent flamenco dancers. 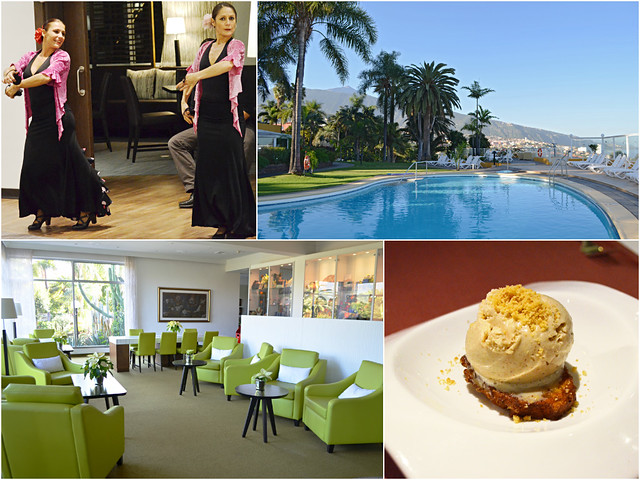 A nice touch, one of many, is the corridor leading to the bar is a mini museum with quirky artefacts, some of which give an insight into the hotel’s origins – like an old pot with HT engraved on it which could be Hotel Tigaiga… or Hotel Taoro. You’ll have to ask about that one, it’s a nice little story.

However, the jewel in the Tigaiga’s crown is its grounds. The hotel is surrounded by 7000 square metres of lush and lovely subtropical gardens that are an attraction in themselves. There’s something quite Far Eastern about them, possibly because sunloungers dotted around the grass below towering palms remind me of hotel gardens in places like Thailand and Sri Lanka. There are nooks, crannies and quiet spots galore. Again, revealing that blend of the conventional and the modern, guests can take a guided tour of the gardens with a human guide or, innovatively, use an online guide to learn about the exotic plants they discover.

One garden area even involves a sensory experience where you walk barefoot over different surfaces. 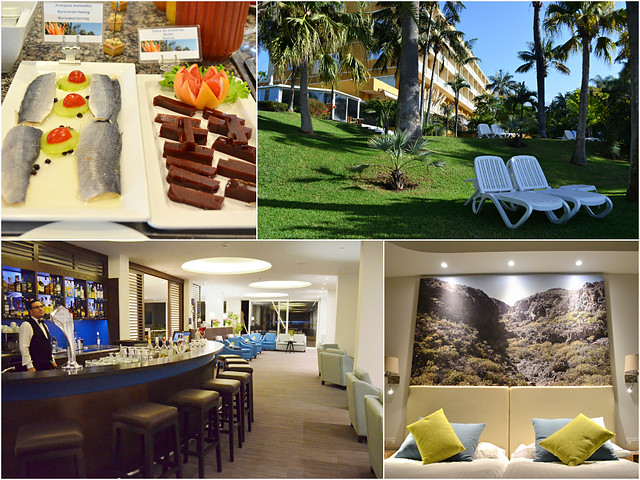 What are the Bedrooms Like?
There are 76 bedrooms, 4 panorama suites and 3 junior suites. Our room was at a western corner giving us panoramic views over the town as well as to the Tigaiga ridge and Mount Teide. Large and bright, it was decorated in the same cool pastel colour scheme as the rest of the hotel so that it looked and felt quietly contemporary. There were nice little unique touches – a small window in the modern bathroom meant you could still enjoy the views whilst lathering up in the large walk-in shower. Each room has a flat screen TV, wifi (good signal), bath robes, hairdryer and safe (extra charge). It was comfortable and practical. A high spot was sinking a sunset beer on the balcony. Superb views, a beer and a sunset – a winning combination in my book.

How Good is the Food?
In its award winning Jardín restaurant the Tigaiga offers something that is quite rare in hotels even luxury ones, dinner with waiter service. Salad starters are typically buffet style (one of the more imaginative versions) but after that, soup, main and dessert are chosen from a select menu so that the dining experience is more akin to a restaurant than a hotel buffet. The food is probably best described as being creatively international and on a level with the better contemporary restaurants on the island. There’s an à la carte restaurant, Tinguaro, which is open to the public. We’ll be returning to try that out at some point.

Breakfast is of an equally high standard with an excellent choice of fresh fruit, warm breads, cold meats, cheeses, pate, yoghurt, Bircher muesli (something I picked up a taste for in Austria) and a selection of hot dishes with a chef to rustle up preferred egg styles to suit. 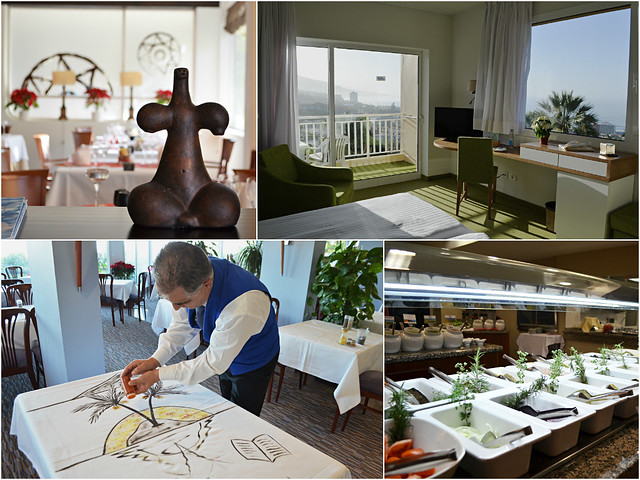 There’s an absolute charmer of a touch at weekends when Jose Luis takes a break from looking after the dining room to ‘paint’ works of art on white tablecloths using a spoon, black sand and coloured spices.

What is the Best Thing About the Hotel Tigaiga?
The gardens are clearly a stand out feature and it’s a wonderfully warm and friendly hotel. But the best thing for me is the Talg family have given it a uniqueness which makes staying there quite different from any other Tenerife hotel. There are just lots of little things which put a smile on your face.

Who Would it Suit Best?
Definitely couples of all ages, especially those who appreciate tranquility, scenery, gardens, good food and a dollop of old fashioned, but not fussy, class.