Anyone who has been to a romería on Tenerife, where food and drink is handed out from the back of beautifully decorated carts, will probably have had gofio amasado thrust into their hands.

It’s one of the lower league foods given away at romerías (boiled eggs, popcorn, chunks of bread spread with sobrasada are others) and seasoned fiesta goers ignore little foil parcels with the stuff in favour of attempting to go for the most sought after goodies  – the barbecued meats.

Other than that, gofio amasado occasionally turns up in the entrées section of traditional Canarian menus. 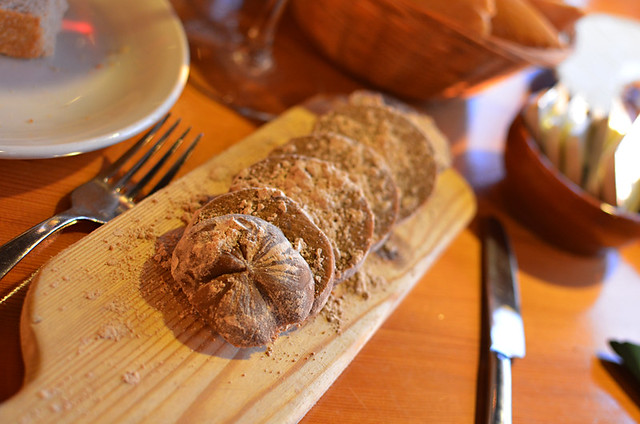 It’s gofio (toasted grain flour) mixed with water, olive oil, almonds and honey and kneaded until it’s a solid mass. Then it’s rolled into a sausage shape and cut into thick discs. Like a few Canarian dishes, ingredients can vary from household to household.

As for the taste, well like many things where gofio makes up the main ingredient, it’s probably an acquired one. Gofio amasado is quite dense, you don’t need to eat a lot of it for it to be filling – it’s ideal peasant food. In fact I read one recipe where the Canarian author compared it to the Lord of the Rings’ Elven bread.

If anything, it’s a wee bit on the boring side without any strong flavour. Saying that, I quite like to eat it now and again and have tried making it to see if I could perk it up a bit more. The result was more or less like every other gofio amasado I’ve eaten.

It’s very cheap, so if you see it on a menu it’s worth giving it a try. On the other hand, go to a romería and you won’t have any problem getting to taste some for nada.