I’m an eavesdropper. I don’t go around deliberately listening into the conversations of everyone I pass, but a key word or phrase accidentally overheard will perk the lobes up.

Airport check-in queues are particularly good for being nosy, especially those full of people returning to Britain after a visit to Tenerife. There I do deliberately listen, keen to hear people’s views. Recently a conversation between two couples revealed some approaches to holidaying on the island that are common.

The first was the usual: “We’ve been working hard so did nothing, just lay around the pool for a fortnight.”
Everyone has their own way of switching off from work and re-energising. Some people do nothing and that’s cool. Others like to spend some of their time at least doing something completely different to recharge the batteries.

But it was the other couple’s comments which had me wanting to interrupt. They’d hired a car one day and driven around the island.
“Yes, we’ve seen it all now,” was the regularly spouted comment which had me tempted to butt in with a “no, you really haven’t”. 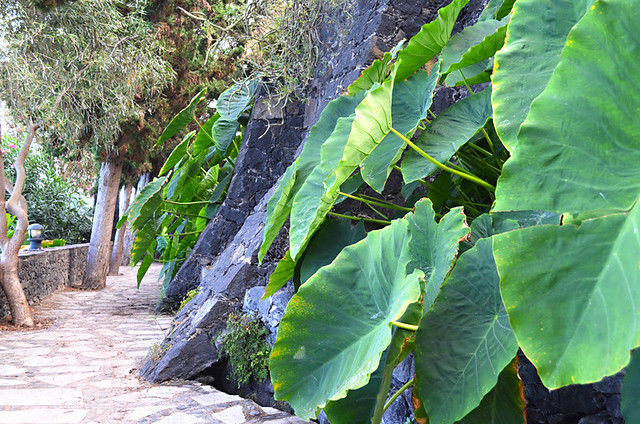 The park itself has only been open as a recreational park for a relatively short time. It was opened in 1987. But it’s been around for centuries, existing as an open air communal laundry where the women of El Sauzal and neighbouring towns came to do their washing and no doubt catch up on the local hot gossip.

It’s not a place that I’d seen mentioned before I accidentally stumbled across it years ago whilst following in the footsteps of a Victorian traveller for a magazine article. I was instantly enchanted, it was like entering a secret wonderland. 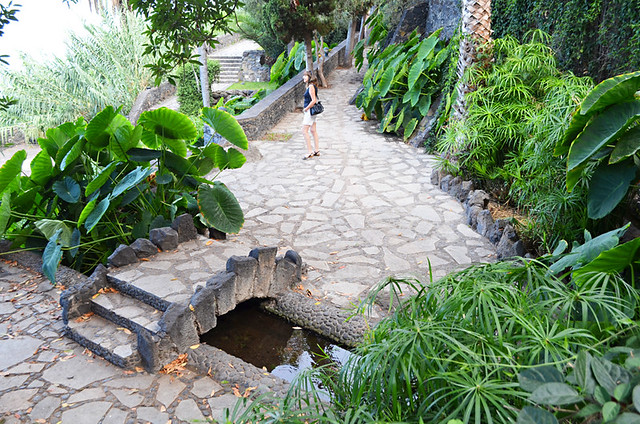 Parque de los Lavaderos isn’t your typical public gardens. The land here slopes down the hill as though being dragged towards the ocean. The main entrance involves a steep descent through an overgrown wilderness. When we were there recently it was far more overgrown than when we first visited.

At first it looked as though the park had been abandoned, left for nature to reclaim it. Lamps were broken and the plants untended. The views of the north coast and Mount Teide remained some of the best you’ll find on Tenerife. 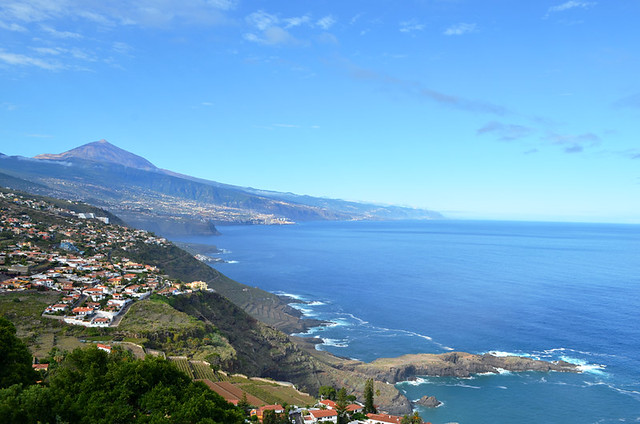 It’s an entrance that will deter some people from exploring further. But that would be their loss.

The stairs level out at a small terrace with a café which changed names since the last time we were there. A sign informed us it opened from 3.30pm (we were there in the morning). Their facebook page shows concerts are regularly held there. It’s quite a venue and a very special place to sit with a glass of wine.

From this point it became clear the gardens hadn’t been abandoned at all. 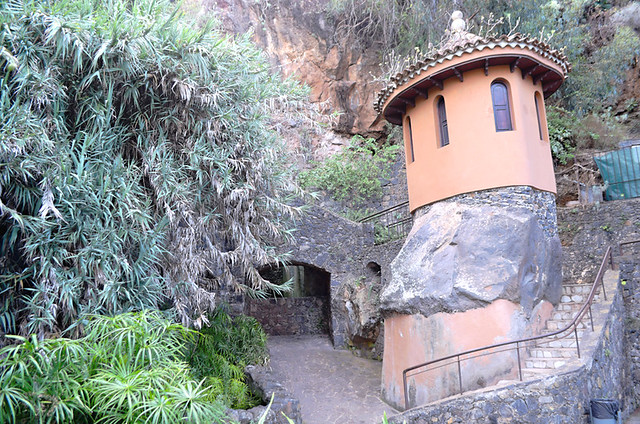 Stone steps descend to a paved terrace and a grotto with a circular house that looks straight out of a fairytale. Huge yam leaves act as a guard of honour for trickling streams, whilst cane thickets and palms add an exotic, subtropical element to the vista. It’s quite magical.

The landscape is not Mary, Mary quite contrary but it’s clearly tended and kept neat in a naturally wild sort of way.

From the grotto, paved walkways lead to the centrepiece of Parque de los Lavaderos, the covered laundry where the water gushes as enthusiastically as it has done since El Sauzal was one of the most important centres on Tenerife. 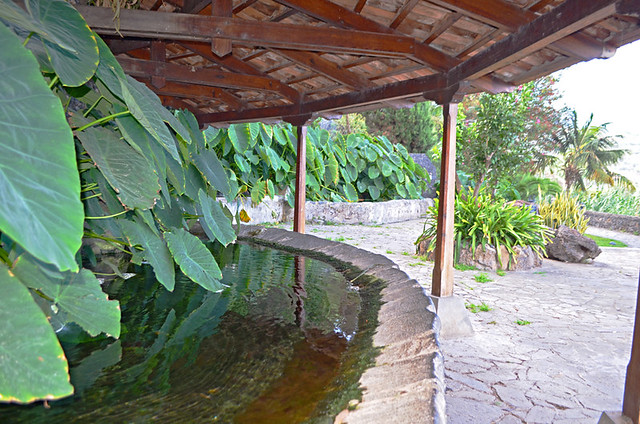 With its trickling streams and fountains, mutant foliage and views over the Atlantic to Mount Teide Parque de los Lavaderos is a place which wraps you in a smile inducing blanket of calm… well it does with us.

Parque de los Lavaderos is open from 8am till 7pm in winter, 8am till 10pm in summer; entrance is free; the entrance is on the road leading out of town underneath the church, there is also a side entrance on the incredibly steep Carretera de los Ángeles; the café Terraza Los Lavaderos is open from 3.30pm till 10.30pm daily, closed Wednesday. How its opening times ties in with the park’s in winter is a mystery. We’ll have to go along to find out.