Since tourism began here in 1866, Puerto de la Cruz, on the North West coast of Tenerife, has offered unrivalled displays of flora and foliage to the wealthy and the famous; wandering those gardens today, the ghosts of an earlier era can still be seen in the shadows cast by the trees and the reflections in the water. 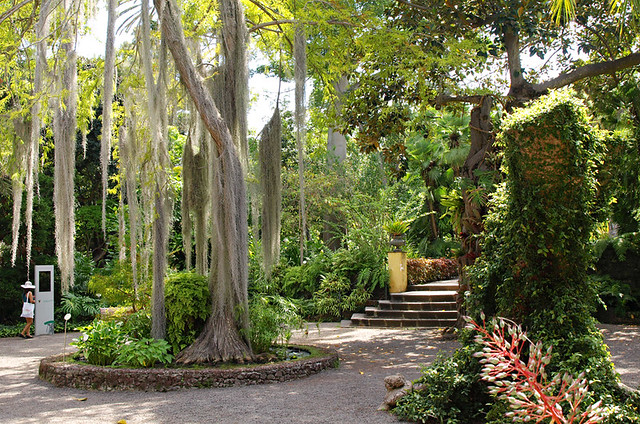 Botanico Gardens
In the district of La Paz, a 10 minute taxi ride from Plaza del Charco, is the magnificent Botanico Gardens with over 5,000 exotic tree and plant specimens from all over the world. Originally intended as a holding ground for exotic flora from the New World en route to the court of King Carlos III in 1788, the Spanish winters proved too harsh for the hot sapped specimens and so the project was abandoned, to the great benefit of Puerto de la Cruz in whose perfect climate the plants and trees thrived.

Within the 60,000 square metres of park are such wonderful exhibits as the drunken tree (Palo Borracho) which seems to sway on its feet; the sausage tree (Árbol de las Salchichas) whose fruit really does look like sausages and the gigantic, 200 year old Higuera whose aerial roots spread over a large part of the garden and that looks like a cross between a triffid and Tree Beard, pretty it’s not, but awesome it certainly is.

Sitio Litre
The orchid garden of Sitio Litre is the oldest in Puerto and has been in existence for over 140 years. The mansion, originally a convent, was built in 1730 and bought in 1774 by a British merchant, Mr Archibald Little after whom the house is named, Sitio Litre translating as ‘Little’s Place’. There have been many famous visitors to the garden that Little created, amongst them Agatha Christie who stayed in the house with her daughter in 1927 following her divorce from her first husband. The gifted botanic artist Marianne North produced over 800 paintings during her world travels, many of them featuring Tenerife and the gardens of Sitio Litre where she stayed during her lengthy sojourn to the island in 1875.

Formal borders frame immaculate lawns across whose surface shadows are cast by a giant pine and two drago trees, a third drago purports to be Puerto’s oldest at 300 years. Most impressive of all is the orchid garden itself; a tunnel of rare and beautiful specimens, it is reputedly the best collection of orchids in the Canary Islands.

Park Taoro
Once graced by the fine ladies and gentlemen of the Victorian era is the 100,000 square metres of park and gardens at Casino Taoro. Behind the Casino, Park Taoro is a favourite haunt for joggers as it supplies endless combinations of paths and routes around its unstructured islands of palms, cacti and Indian Laurel trees set in volcanic basalt.

From the front of the casino, planted terraces tumble down the steep hillside towards the town, their green tendrils spreading onto the pathways that thread between ponds, fed every hour or so from a gushing waterfall cascading down the terraces, over several smaller falls, through stepping stones and under bridges into rock pools. 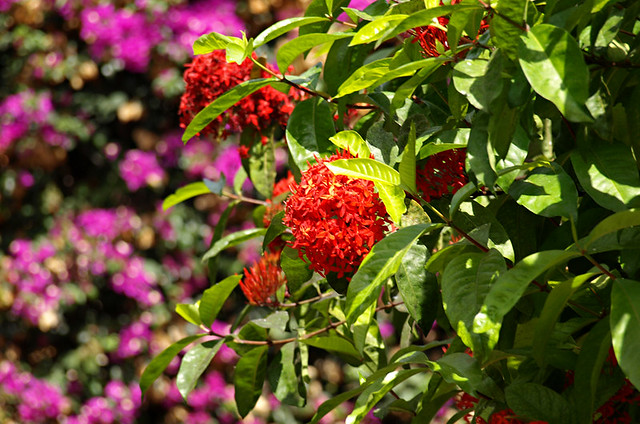 Risco Bello
Hidden alongside the casino, the water gardens of Risco Bello offer a peaceful retreat from both the heat of the day and the bustle of down town Puerto. A gentle air of decadence adds to the sense that you’re discovering a secret garden as you weave your way down cobbled paths and over wooden, rickety bridges and giant stepping stones. The gardens abound with statues and fountains, there’s even a small waterfall behind whose façade the path leads you through a small grotto. The pools themselves are a haven for vividly coloured dragonflies and butterflies that hover and feed amongst the reeds and lilies filling the water’s surface. The little tables that adorn the waterside café offer a place to sit and enjoy the solitude. Update 2022: Sadly, Risco Bello is no longer open.

Discover the best of Puerto de la Cruz with the Real Tenerife Town & City Guide. This mini guide features two walking routes, one town and one garden route which covers the locations described here. As well as having easy to follow directions, the guide is full of information about the town and its attractions, recommended ‘refreshment’ stops and choice restaurants.
Available online for just €3 and sent to your email address in PDF format for you to print at home.