The trouble with the football season is that it can play havoc with dining times. We’re happy to snack on a toastie in the Beehive Pub in Puerto de la Cruz when kick-off interferes with lunch, but evening games are a different matter altogether.

During Champions League games we have to eat before the 7.45 kick off, it’s like eating late afternoon as far as we’re concerned and a full meal seems too much at that time. 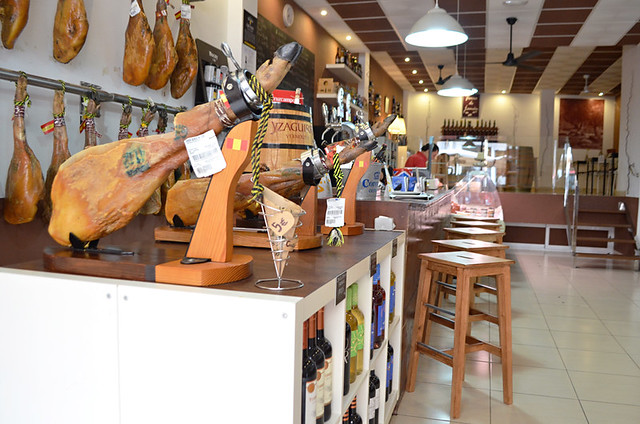 This is where tapas comes in handy. I’ve mentioned before that Puerto de la Cruz has the best choice of tapas restaurants on Tenerife as far as I’m concerned. Relatively recently these have been joined by a handful of deli type bars specialising in jamon iberico. One of these, Tierra de Jamon is on Calle La Hoya. As it’s a stone’s throw from the Beehive, dining there meant we’d have optimum eating time before the match started. 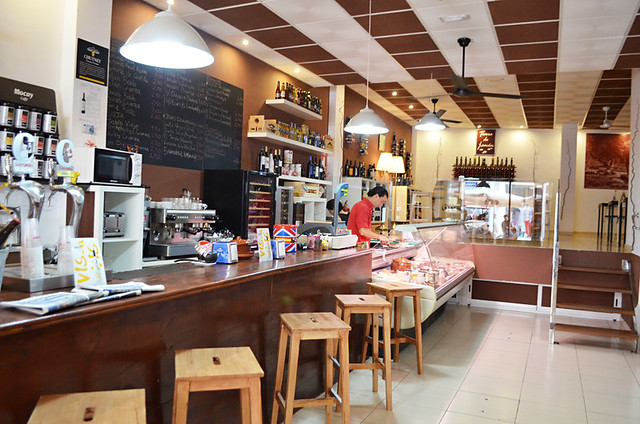 We’ve wanted to eat in Tierra de Jamon since it opened. Places with rows of hanging hams always appeal. They’ve got that old school Spanish tasca look about them even when, as in this case, the décor is sleek and chic.
Jamons and wines take pride of place at the entrance whilst a row of chunky stools sit invitingly in front of a long bar. A stylish mezzanine area offers a choice of stools beside huge barrels or more conventional tables and chairs. I mentioned Tierra de Jamon is also a deli, so it’s a good place to pick up cheese, chorizos, jamon and quality local and Spanish wines. 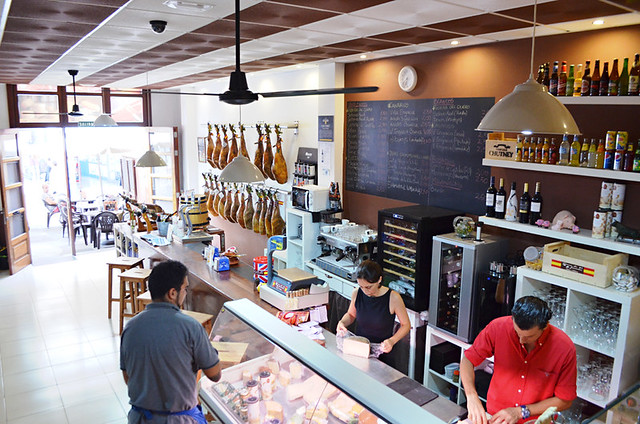 Although it specialises in jamon, cheese and wine, the tapas menu includes a good range of other tapas dishes including tortilla and anchovies. It seemed perfect for our situation. Four of us sat down at the outside terrace, checked out the menu and promptly ordered… burgers.

The Food at Tierra de Jamon
Although ordering burgers in a tapas bar specialising in jamon iberico sounds incredibly naff and stereotypical Brits abroad, we had good reason. As well as the tapas menu, there was a hamburguesas caseras menu and one look at that had us hooked. They sounded bloody marvellous. Plus three of us ordered iberica burgers, so we didn’t stray too far from the specialist ham path.  Andy ordered the Angus burger – tempted by the fact that it was a) Aberdeen Angus and b) it was jazzed up by the addition of French goat’s cheese and red peppers. Our iberica burgers on the other hand had an intriguing topping that included dried apricot, raisins and manchego shavings. 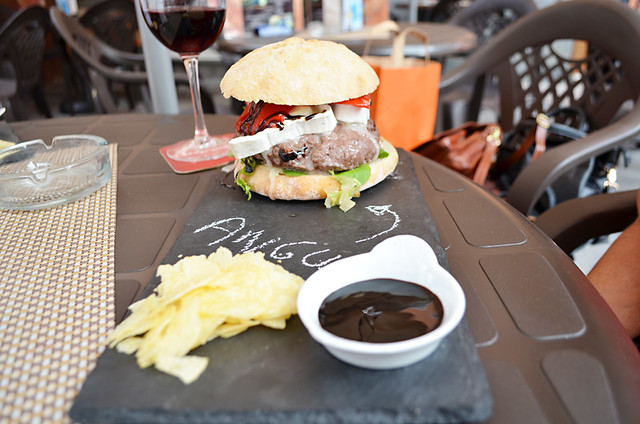 As the burgers were made from scratch there was a bit of a worry about timings but our waiter  promised we’d have plenty of time to devour them before the match started.

Our decision to stray from the tapas path proved a sound one. The burgers looked as good as they had sounded; huge, colourful towers held up by a chunky beefy base and served on a slate with some crisps and a relish.

They were good to their word, serving them in plenty of time. But they were so big that it took us a while to munch our way through them, especially as we wanted to savour every delicious bite – the creative toppings enhancing the beef. Andy and I should have gone half and half so we could have enjoyed both iberica and Aberdeen Angus versions, but we were so caught up enjoying the ones we chose the thought didn’t enter our heads till afterwards. 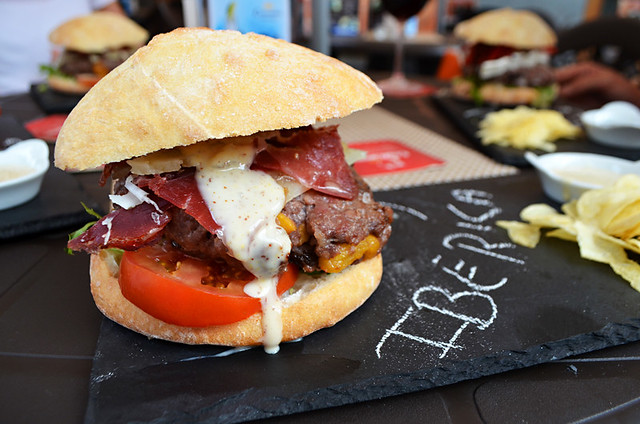 In the end we made kick off with a few minutes to spare. Had it not been for the football, we’d have lingered longer. As well as the superb burgers, the glasses of wine at Tierra de Jamon are generous and good value – quality wines average €2.50.

Tierra de Jamon is a good looking place with great food and friendly staff. We will definitely be returning to try the tapas. On the other hand, there were four specialist burgers and we only tried two of them…