For our first festive season on the island we were surprised just how Christmassy Tenerife felt, there was less materialistic madness and more an atmosphere of ye olde Christmas spirit. We were enchanted, and even shed a tear or two, as a mix of nationalities sang Silent Night outside the Iglesia de la Francia in Puerto de la Cruz. We also made a colossal cock-up, expecting a fun-filled Christmas Eve to be enjoyed by the one half of the family who’d joined us for our first Navidad on foreign shores. 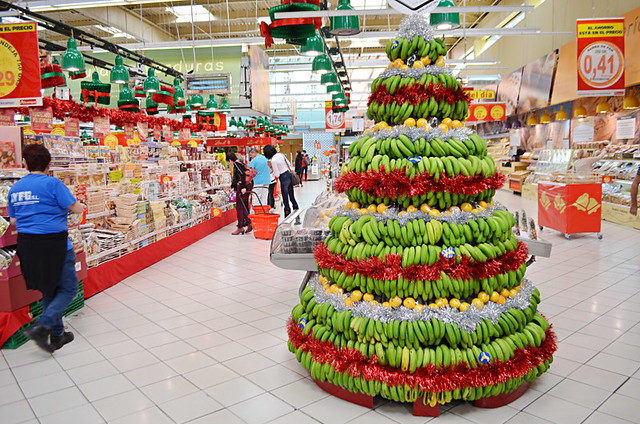 Christmas on Tenerife can be familiar and yet it can also be very different. Here are ten tips for enjoying a particularly Tenerife festive season. 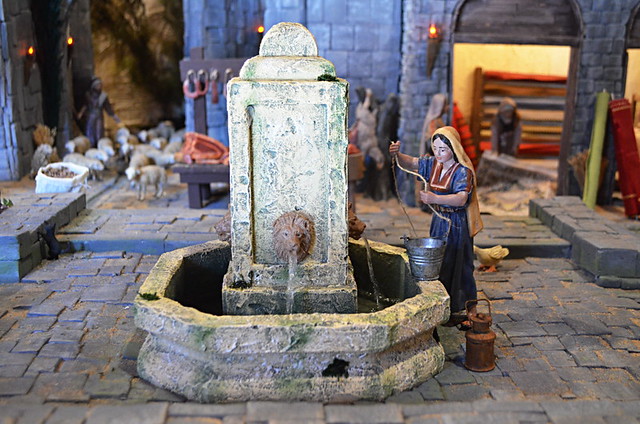 One of the big festive things to do on Tenerife is to follow a belén route, these are elaborate and lovingly created nativity scenes, the best of which have working models. All traditional areas will have plenty of belénes to seek out. Our favourite places to go nativity scene hunting are La Orotava, which has a special belén route to follow that can have you wandering into the back rooms of shops and even people’s houses, Puerto de la Cruz and Santa Cruz. They’re less obvious in resort areas but most hotels will have one although I’ve yet to see the rogue belén character known as el caganer in a hotel belén. 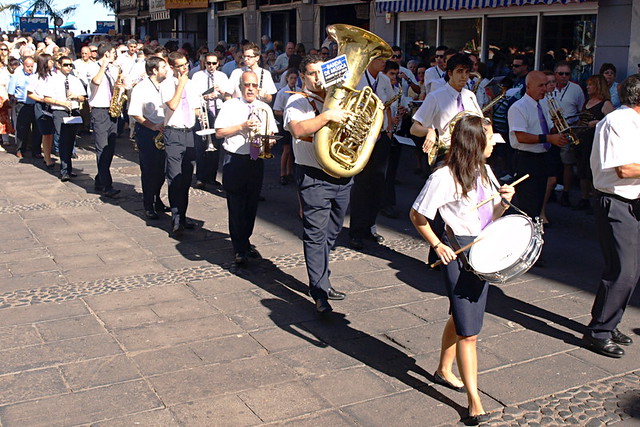 A tradition on Tenerife is for the Tenerife Symphony Orchestra to hold a free open air concert on Christmas Day evening in Santa Cruz. It seems like a magical experience (we’ve only ever viewed it lying stuffed like Xmas turkeys in front of the goggle box). Alternatively, Tenerife Auditorium stages the big musical of the year over the festive period. This year (2016) it’s Mamma Mia! However, we particularly like the the smaller, more intimate affairs such as  when the local brass band plays Christmas Carols outside of Iglesia de la Francia. All municipalities have quite extensive Christmas programmes which include concerts throughout the festive period. 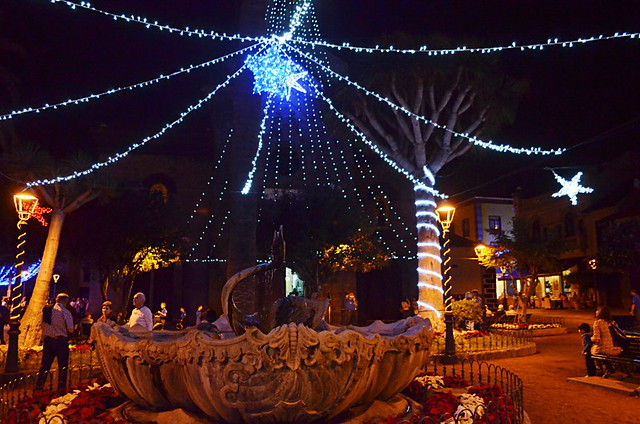 Some of Tenerife’s traditional towns pull out all the stops when it comes to sprucing up the streets for Christmas. We like to go on a mini tour to find out who has the best Christmas lights. Invariably Puerto de la Cruz, Santa Cruz, La Laguna and La Orotava usually look sparkly and beautiful. 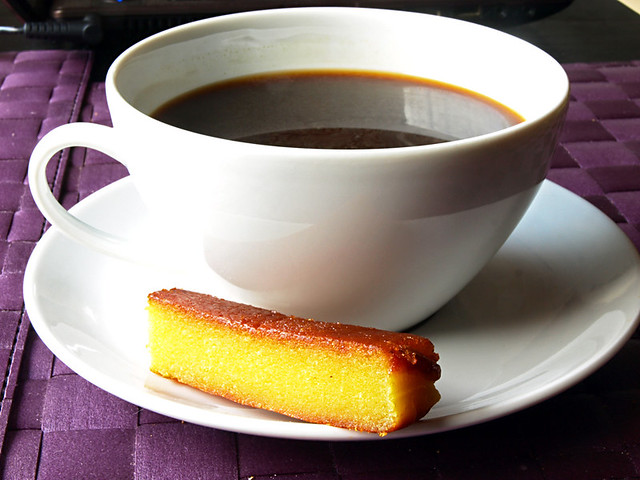 In theory turrón, a type of nougat cake from Jijon, should only be available around Christmas. The Moors introduced turrón to Spain, but a popular tale attributes its existence to a Moorish king in Alicante who had a bakery create a cake from almonds so his Scandinavian princess wife could enjoy a year-round flavour of the almond trees which she loved to see in bloom in spring. Whatever the source, the classic turrón yema tostada (a mix of almonds, honey, egg yolk and sugar) goes great with a cup of coffee. At Christmas the local supermarkets have aisles full of different flavours of the stuff.

Pick up a poinsettia 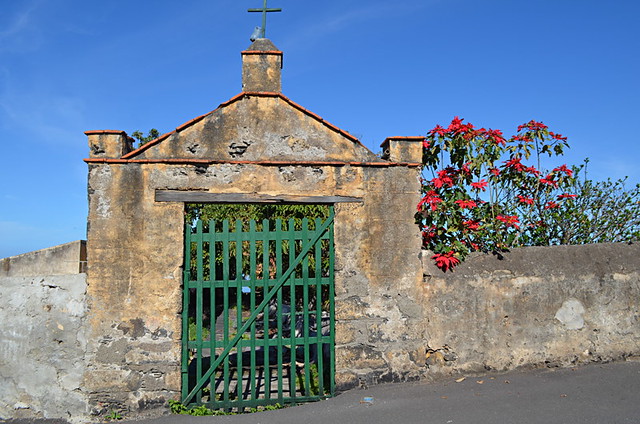 Tenerife turns scarlet at this time of year as the island’s poinsettias bloom spectacularly. You can pick up potted versions of this Christmas plants in most local supermarkets but the best displays are found by the roadside, some in neat, landscaped rows, others growing wild. The most famous Tenerife display of poinsettias is the floral clock at the entrance of Parque García Sanabria in Santa Cruz. 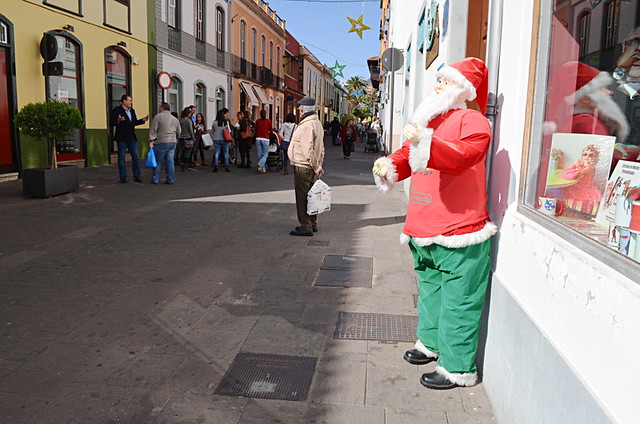 Christmas shopping on Tenerife can be a pleasure rather than a battle for survival amidst frantic hordes… up to a point. Whilst you don’t really find Christmas markets in the same vein as those in other parts of Europe, there are artisan markets in some areas. Puerto de la Cruz has one every day in the run up to Christmas and beyond. The bigger traditional towns are lovely places to shop, as long as you time it right. We wandered almost spookily quiet historic La Laguna streets last year. However, don’t be fooled. The real festive period on Tenerife doesn’t fully kick in till around Christmas Eve (Nochebuena) when things start to get frantic as locals start preparing in earnest for Los Reyes Magos. 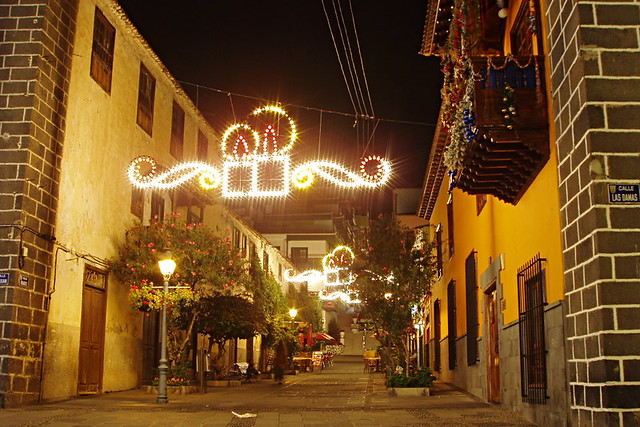 In southern resort areas there are parties galore and Christmas Eve is pretty much what we expect from a British type Christmas Eve. Not so in traditional parts where everything shuts down by about 9pm, even restaurants, as locals head home to enjoy Nochebuena with the family. Our first Xmas Eve was an extremely quiet one as we were caught out by this. We ended up dining out in a mediocre Chines restaurant. If you want a fun-filled Xmas Eve in traditional area you’ve got a couple of options. Head to a bar that isn’t Spanish or, if that’s not an option, wait till after midnight when meals and mass are over and younger Canarios celebrate at Nochebuena parties in clubs.

Go to the beach 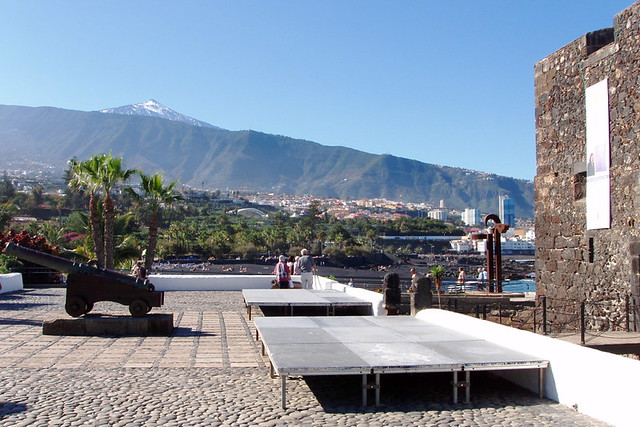 It’s a surreal experience to sunbathe on Christmas Day, especially if there’s snow on Mount Teide.

Toast the New Year outside 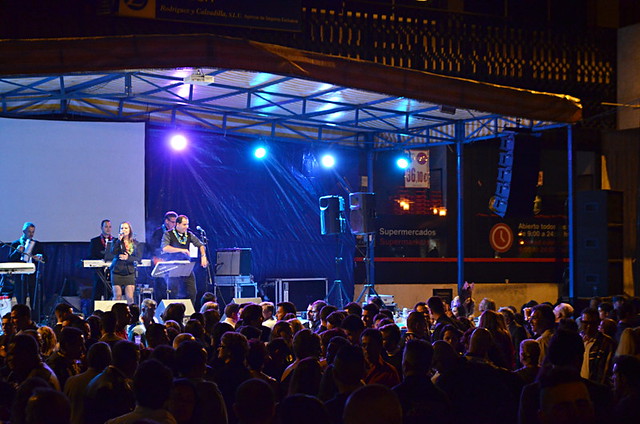 Although pubs, clubs and restaurants put on special New Year (Nochevieja) parties, the best place to see in the New Year is at a street party. Again this applies mostly to traditional areas. Dress to the nines (the locals do), stock up on cava and grapes (for chomping as the midnight bells toll), wear red underwear (for good luck), enjoy the fireworks and dance the night away to live bands and DJs, then wander home at dawn. It’s a memorable experience. 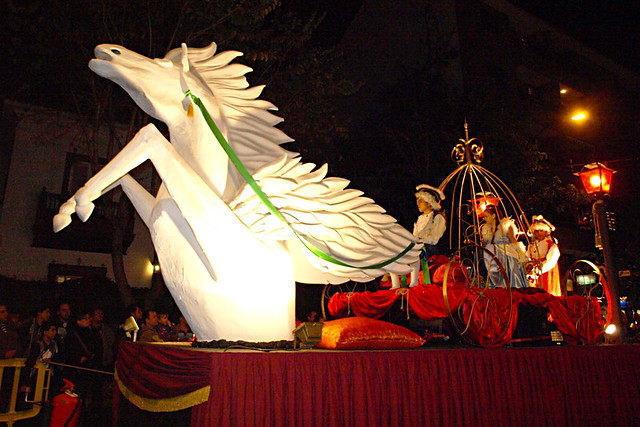 The festive season doesn’t end on first or second of January on Tenerife, it continues until the sixth which is basically Christmas Day here, the day when children wake up to find if Los Reyes Magos (the three kings) have considered their behaviour throughout the year good enough to leave them presents. On the night before, Los Reyes Magos arrive on the island (lots of them as it happens in each municipality) to parade through towns, sometimes on camels, accompanied by a flamboyant entourage. It’s supposedly for the children, but adults love the parades just as much as their offspring.

And that’s it, all over by midnight on the sixth of January… except the ‘rebajas‘ (sales) start on the seventh. Then things really get crazy.