Travel writers often enthuse about the virtues of trying authentic local dishes when visiting new destinations. It’s certainly a view we subscribe to. But over the years our attitude towards ‘traditional’ local cuisine has evolved somewhat. The longer time we spend in a place (e.g. Tenerife and the other Canary Islands), the more we notice how similar traditional menus are from town to town. We like variety, and once we’ve been round the traditional menu block a few times, we crave something different.

Tenerife and the Canary Islands are no different to most destinations where traditional menus don’t vary all that much from restaurant to restaurant. In some places you can still be working your way through those menus over the course of two weeks, but in others you’ve exhausted choices within a matter of days.

However, where Tenerife is different from many locations we’ve visited is that in the last few years a talented new breed of local chefs have given traditional dishes a right kick up the backside. They’ve tweaked and prodded recipes to give them a contemporary makeover and in doing so have breathed new life into old dishes. It makes dining out on the island far more interesting for foodies who enjoy traditional gastronomy but also having their tastebuds exposed to new flavours and innovative cuisine.

Here are ten examples of traditional Tenerife/Canarian dishes and ingredients which have been given a modern makeover. 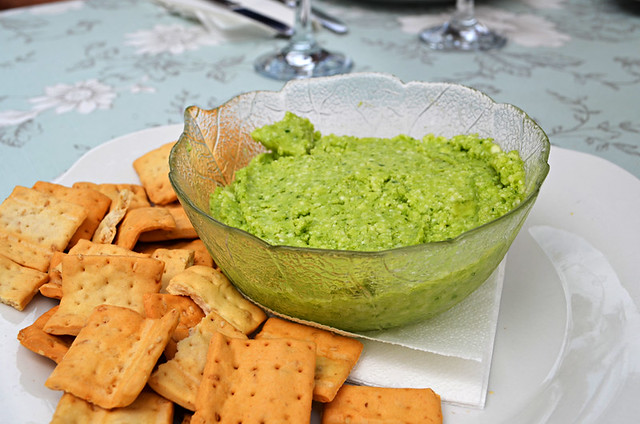 In truth I could never tire of the taste of almogrote, a pungent cheese pate from La Gomera. But I’ve also thoroughly enjoyed it when it’s been used more creatively – as an ingredient in a risotto, or melted on papas arrugadas (that one was on Gran Canaria). Most interesting was a fresh and savoury almogrote verde at La Cuadra de San Diego in La Matanza. When I posted an image on Twitter there was an almost immediate response from people on La Gomera who protested it shouldn’t be called almogrote as it was green. 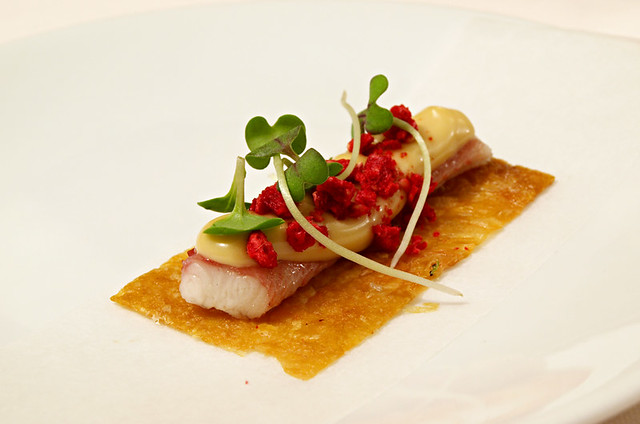 Many visitors to Tenerife might not realise eel is a traditional ingredient on the island. But there are areas which specialise in morena frita (fried moray eel) and every supermarket has packets of gulas (tiny eels) often used in revuelto de gulas (eels and scrambled eggs); tastier than it might sound. A modern take on how to make eel more user friendly was at Michelin star restaurant El Rincón de Juan Carlos in Los Gigantes where Juan Carlos placed a fillet of eel on a crispy chicken skin bed and topped it with teriyaki sauce and dried raspberry. That dish alone showed why El Rincón has a Michelin star. 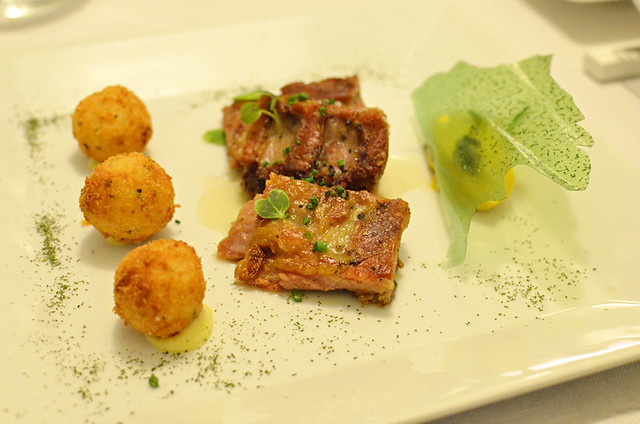 Costillas con piñas y papas is a hearty, mishmash of a dish found on many restaurant menus in the Tenerife hills. Although the flavours are there, it’s not the most appetising looking (like most of these kitchen-sink type dishes you find in the Canaries) so any reboot tends to improve its looks no end. This far more sophisticated modern take was at the DÚO restaurant inside the Melia Gran Palacio de Isora in Guia de Isora. 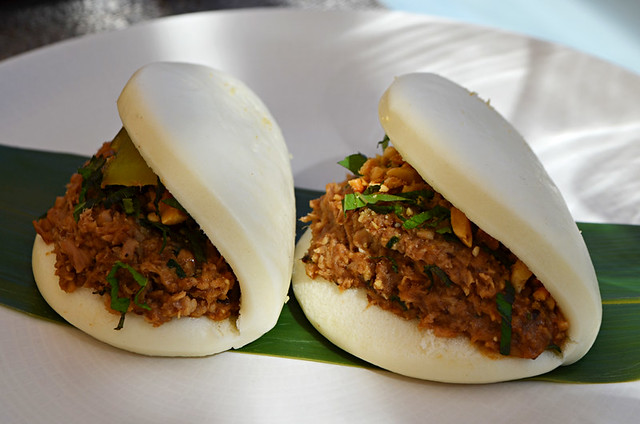 Cochino negro (Canarian black pig) is a delicious speciality found in the best traditional restaurants on Tenerife and another I don’t get tired of trying whether it’s pig cheeks or as part of a gourmet burger. Best of all is at Tasca Haydee in La Orotava where cochino negro in Chinese bao buns has become a popular signature dish. 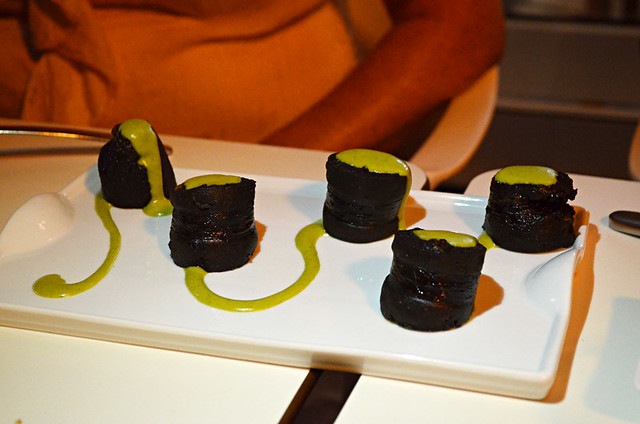 Spain’s version of a blood sausage is quite versatile; I’ve eaten it in a variety of forms, the most unusual possibly being a morcilla pizza in Madrid. In Tenerife I’ve had it with honey and almonds as well as this rather excellent, volcanic landscape affair consisting of morcilla and mojo verde at La Cocina Gastrobar in Puerto de la Cruz. 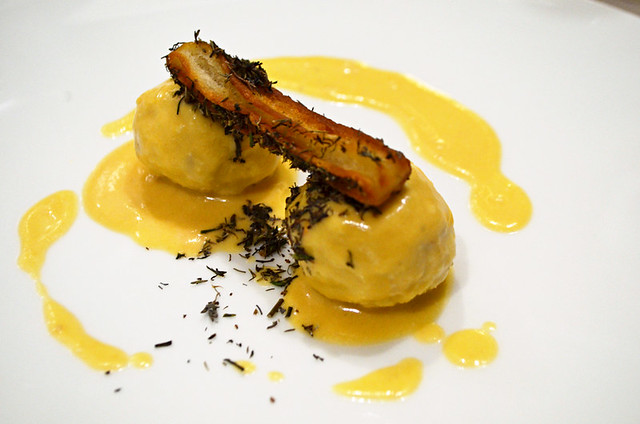 Cherne (wreckfish or stone bass) is a favourite local fish and found on the menu of any decent traditional restaurant on or near the coast. Mostly it’s simply grilled or fried, which is hunky John dory for me as far as fish preparation is concerned. In modern restaurants it’s turning up in alternative ways. Twice in the last year I’ve had it in albóndigas (balls) form. In the picture the cherne at Solana in Santa Cruz came served in a light coconut sauce and with a herby churro. 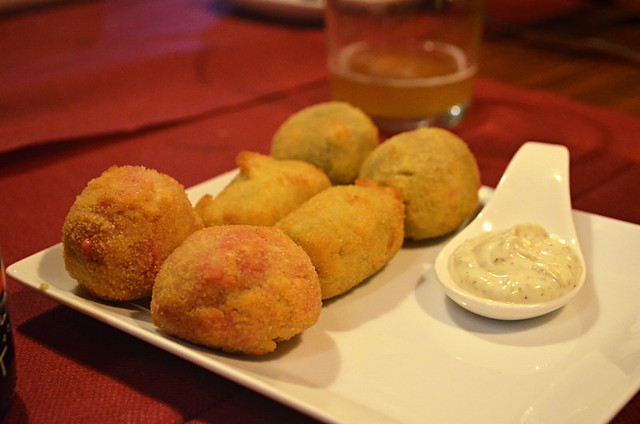 Just a few years ago these were either fish, jamón, chicken and very occasionally spinach if you were lucky. Now Tenerife chefs have gone to town with ingredients. I’ve had blue cheese ones, puchero croquetas, banana croquetes and also this trio of mushroom, leek and beetroot croquettes at El Mañá in Puerto de la Cruz. 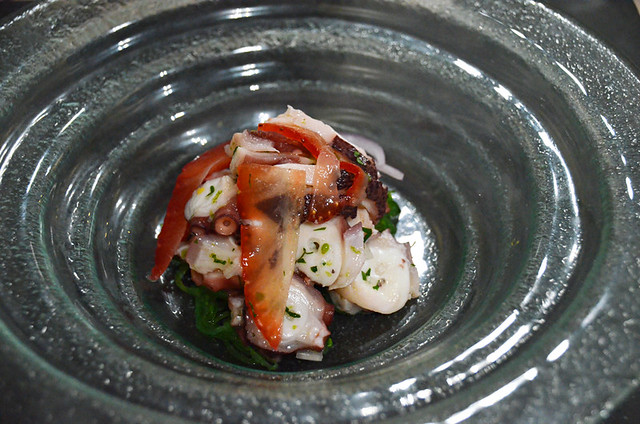 I love pulpo, properly cooked it’s very tender and extremely tasty. For years it either came served as a thick tentacle, as part of a salad or, with potatoes, as pulpo a la gallega. Now you can find it in various forms – as a timbal, octopus carpaccio or, my current favourite, octopus and strawberry ceviche at La Arena 53 in La Orotava. 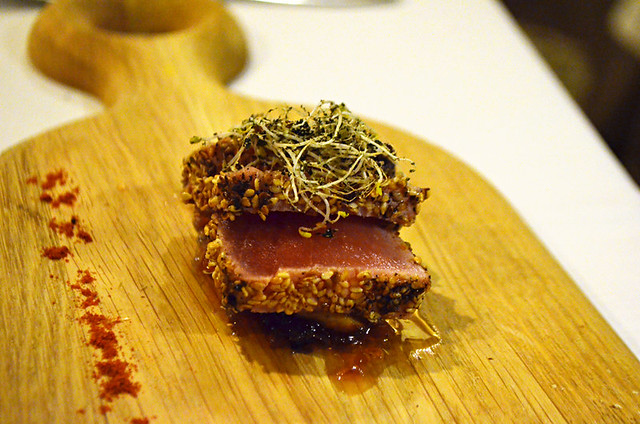 For a long time I strayed clear of cooked tuna on Tenerife as it was often presented as a slab which invariably was overcooked so it was far too dry. The new generation of chefs often only allow a brief flirtation with the skillet and the likes of tuna tartar is popular at the moment. It’s melt-in-the-mouth moist and delicious. This one was served in the restaurant of the Hacienda del Conde Hotel in Buenavista del Norte. 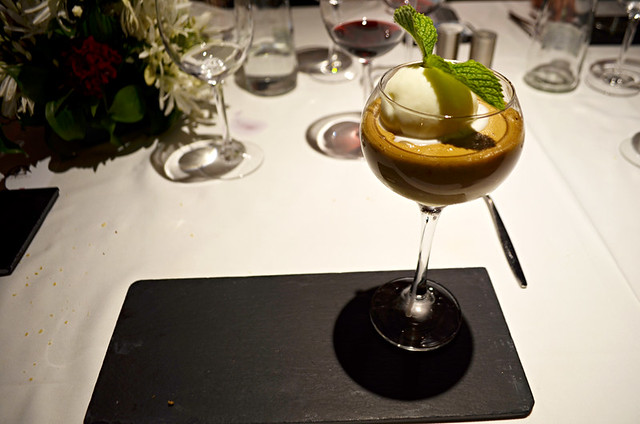 Anyone familiar with Canarian desserts will know they’re not always the most exciting of creations, but they do reveal a talent for being able to create a lot of versions of milk puds. Contemporary chefs have given a much needed boost to this area of dining, with the likes of gofio being used in all sorts of creative ways. This isn’t gofio, it’s a barraquito or the Mirador de Garachico’s version of what a barraquito would be like if it was a dessert.

If any of the above dishes are of the sort to get your juices flowing in anticipation there’s bad news. Because Tenerife’s more creative chefs are, well, creative they change their menus around on a regular basis so dishes mentioned above might not be on the menu. But the good news is twofold. One, there will always be some tastebud-teasing dish based on traditional recipes and ingredients. And two, because menus change regularly there’s no danger of over familiarity of menu items resulting in culinary boredom.