A bureaucracy-laced trip to the Tráfico offices (the authority responsible for roads and driving) in Santa Cruz is never something we look forward to as it usually involves a seemingly endless cycle of queues and forms. It’s one of the more organised of administrative centres on Tenerife, but nevertheless you might as well write off most of the day if you have to visit.

On the up side, a trip to Tenerife’s capital is never a hardship. There’s always something interesting to see, do and eat. 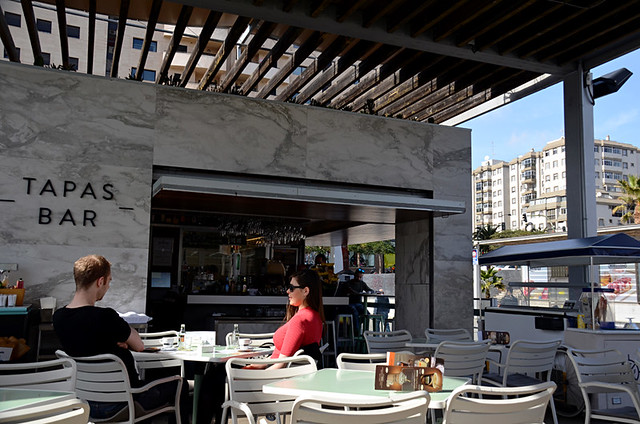 By late morning we were out of Tráfico and in the centre of the city, enjoying a coffee and good music (Blues, Jimi Hendrix) at the Bluefin Plaza beside El Corte Inglés. Being late January when temperatures drop a few degrees across the island, we had opted to wear jackets. After 15 minutes on Bluefin’s sun-smooched terrace we regretted that decision. Santa Cruz is one of those places on Tenerife where the sun shines most of the time. In the shade in January temperatures might be cooler, in full sun they can still sizzle.

Usually there’s a lot of dithering goes on when it comes to deciding where to eat in Santa Cruz. The restaurant scene is such it’s like driving into a car park where there are so many free spaces it makes it difficult to choose one. This time we knew exactly where we were going to have lunch, courtesy of a facebook post which had popped up in my feed the previous day – the Mercado de Nuestra Señora de Africa. 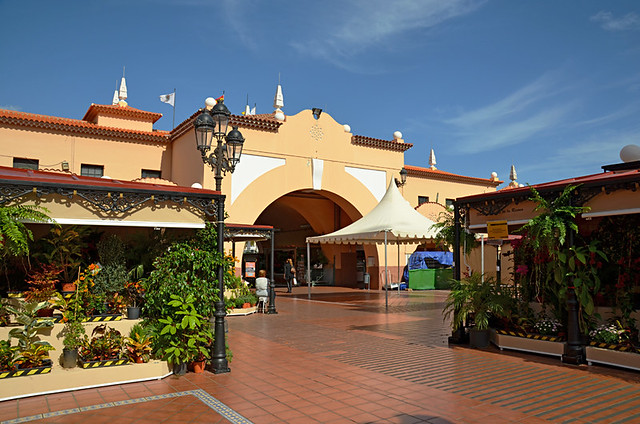 Mercado de Nuestra Señora de Africa
Despite its geographical position, name and colonial North African style, the market has nothing to do with Africa itself. The wife of General Ricardo Serrador, the driving force behind the market being built, was devoted to Nuestra Señora de Africa. La Recova, its other name, has been the place in Santa Cruz to buy fresh fruit and vegetables, fish, meat, cheese and flowers since it opened in 1943. Now it also doubles as a tourist attraction.

Around part of its exterior are tiny stalls where chicharreros (the nickname for people who live in the city) pick at tapas and sip at small glasses of red wine. 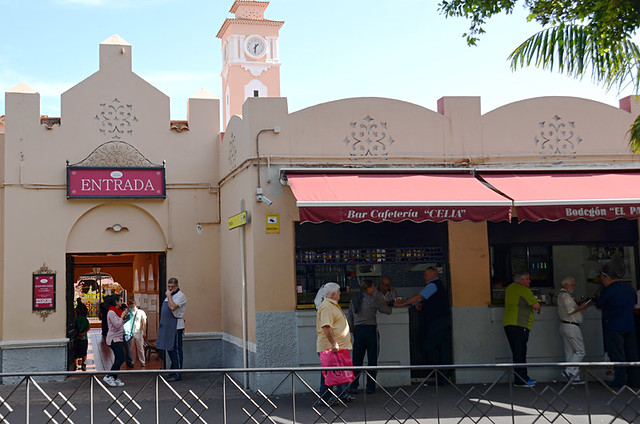 We entered via a side door but the main entrance is the most picturesque approach, an arched walkway bookended by statues of a flower seller and ‘Homenaje al chicharrero’, two fishermen dragging a boat.

The market occupies two floors. At ground level is a network of stalls selling fruit & vegetables, meat, cheese, flowers, herbs and spices as well as a couple of cafés.

We were more interested in what lay beneath ground. 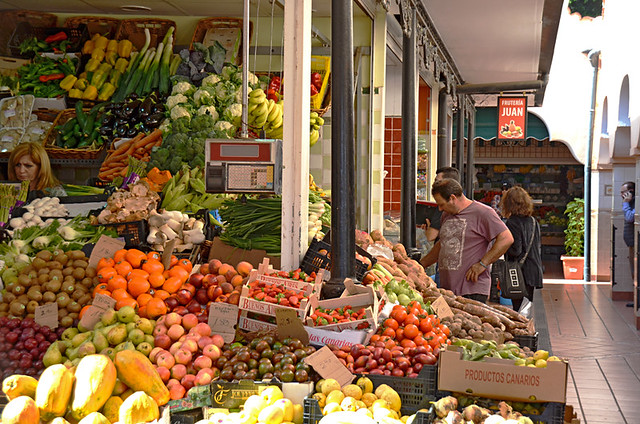 Underground food scene at La Recova
The lower floor at La Recova is a fish and seafood lover’s Nirvana. Not only are there stalls where the most exotic creatures from surrounding waters are laid out on ice carpets, there’s a food hall with a selection of units specialising in fish and seafood dishes whose menus range from traditional to the contemporary. 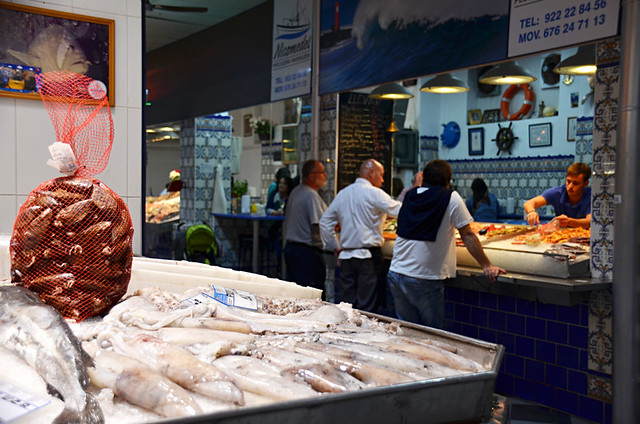 In some food halls you grab a seat then go find the food which rings your bell the loudest. Not so at La Recova. Here different areas belong to specific stalls. We plonked ourselves on stools at Dos Grados Centigrados where smart chefs in black uniforms bustled away preparing dishes which were in danger of making us literally drool.

“Sorry, no food. Today we prepare,” one of the chefs dropped a bombshell. “But you can have wine.” 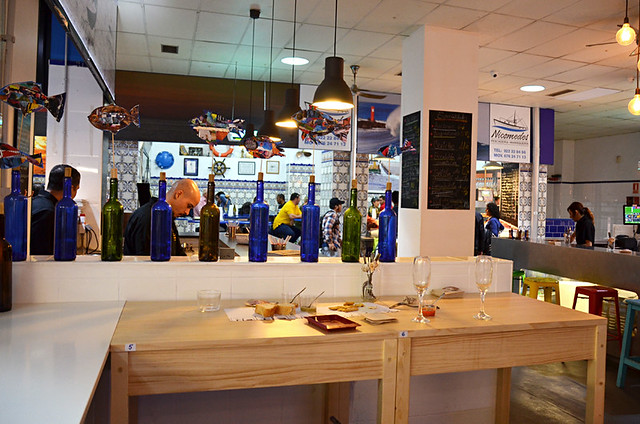 Feeling as gutted as some of the residents of nearby market stalls we shuffled five feet to the next kiosk, la ría, where smiling chef Juan de la Vega “like Zorro’s surname” waved us away.

“You wanted to eat there,” he teased.

Every cloud has a silver lining might come across as a cliché, but often it’s true. The menu at la ría was as enticing as that at Dos Grados Centigrados. We ordered ceviche (the 3rd most popular dish), hummus with cod, and tortilla de gambas al ajillo (garlic prawn omelette – the most popular dish) with a couple of glasses of white wine. 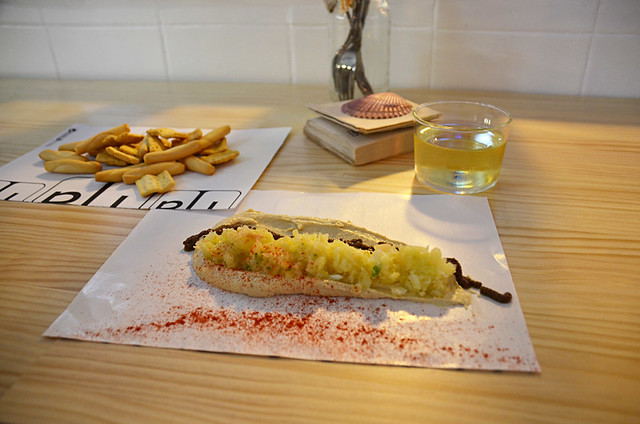 As well as being a foodie’s version of Aladdin’s Cave it’s a good spot for people watching. Whilst we waited for our food we watched chicharreros browse fish stalls as a mix of office workers and shoppers took up stools at other stalls. Despite it being below a tourist attraction, hardly any visitors had made it ‘down below’.

The hummus and cod arrived on a piece of paper with accompanying mini bread sticks, not a place for the ‘we want plates’ fans. It was an unusual and moreishly delicious combination. Even better was the follow up ceviche, a zingy assault of fresh flavours exactly as good ceviche should be. 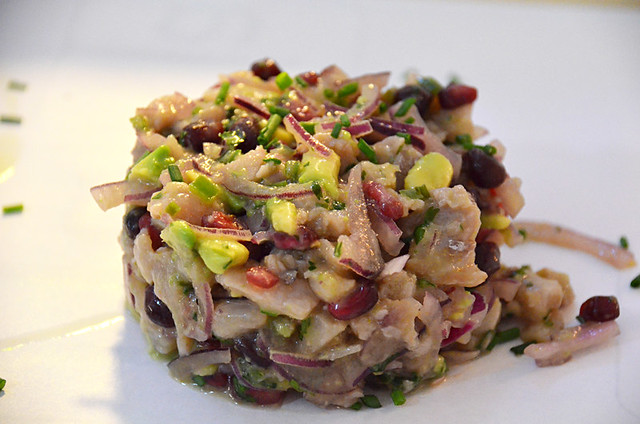 As Juan de la Vega brought various dishes he served them with snippets of information; his grandmother’s side of the family originally hailed from Glasgow, how long other stalls had been opened, stories of stones with the la ria’s name on them being photographed around the world.

The last dish was the garlic prawn tortilla; a stand out light, fluffy and sensationally tasty omelette. 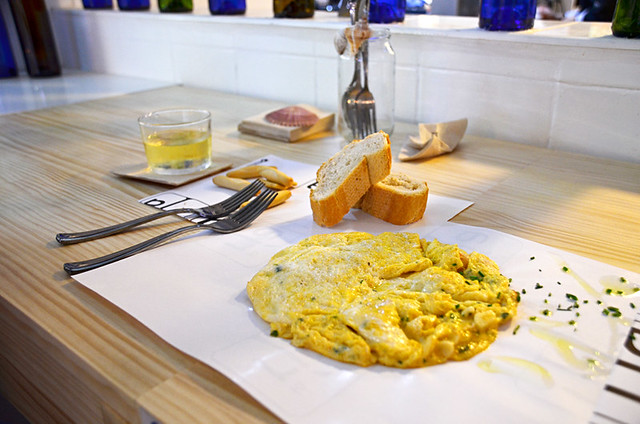 As we wolfed it down we toasted the fact that Dos Grados Centigrados had been closed.

Even when we thought we were finished we weren’t quite done. Juan filled our glasses with more white wine and placed two spoons with little heaps on them – “The second most popular dish, ensaladilla de papas negras y gambones,” he explained. 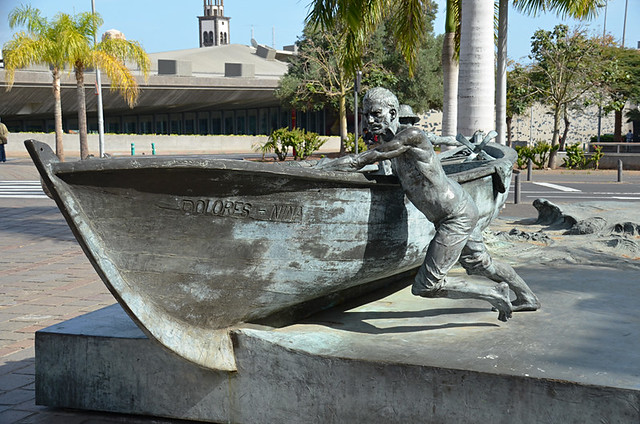 It was the perfect antidote to the bureaucratic morning and another reminder of just how excellent the gastronomic scene is on Tenerife.

We have to return to Tráfico next week. Guess where else we’ll be going?