Posting a couple of photographs on our facebook page this week got me pondering about restaurants and cafés on Tenerife which are in the sort of location where drinks and food are served with distractingly stunning vistas.

I started scribbling down favourites in no particular order as they popped into my head, stopping at 10 because, despite Google apparently liking titles with random numbers (e.g. 23 things to do in the Canary Islands), I like the number 10 when it comes to lists. Five’s good as well when there isn’t enough of something to warrant a 10 list. Anyway I digress.

The point is there are far more than 10 restaurants with impressive views on Tenerife, but these are some of our favourites. 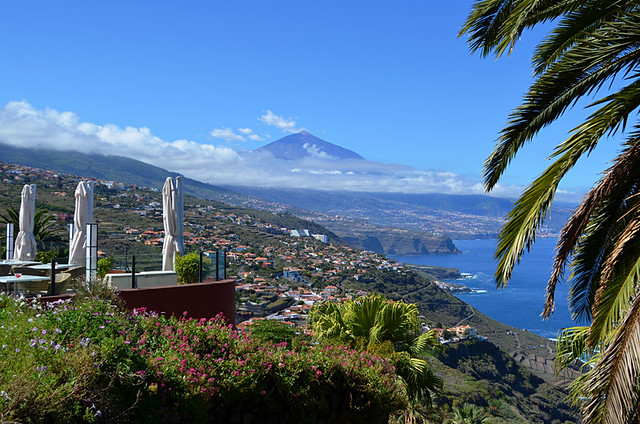 We’ve long claimed one of the best views of Mount Teide is to be had from El Sauzal. As a bonus you also get a great chunk of the north coast thrown in. To complete the package, the surroundings at the Terrazas del Sauzal are such a stylish mix of the contemporary and colonial architecture that they put up a damn decent fight with the vistas to grab your attention. The innovative menu is excellent as well. 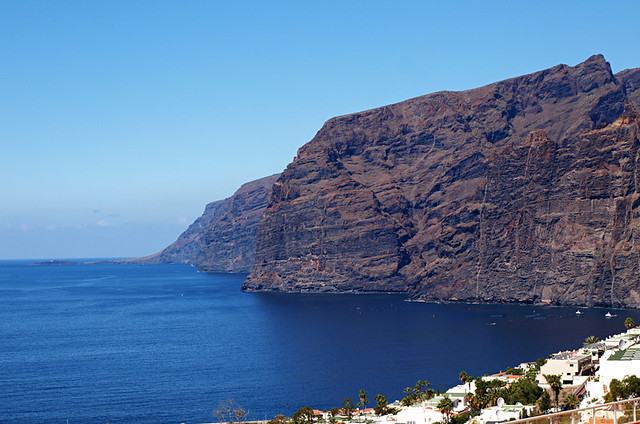 Thanks to the cliffs the resort is named after and La Gomera on the horizon, Los Gigantes probably shades it as the resort with the best views on Tenerife. Even better though is to get high. By that I mean climbing above Los Gigantes to the terrace of the café at the Mirador de Archipenque where the vista acts like a natural drug. 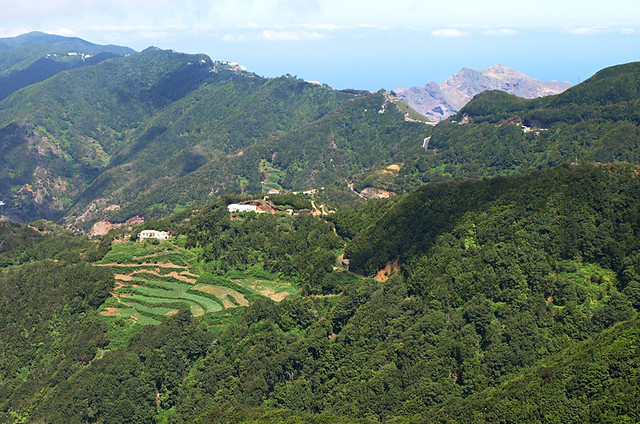 The most typically Canarian amongst this bunch, Casa Carlos is located in a rather unattractive building beside the road which splits Anaga. But it’s a place which oozes rural character. Sometimes there’s an old barbecue set up the car park/outside terrace, creating irresistible aromas. The real draw is the lush mountain scenes which hypnotise customers enjoying traditional Canarian cuisine with Dorada beer on the tables overlooking Anaga’s seemingly impenetrable barrancos. 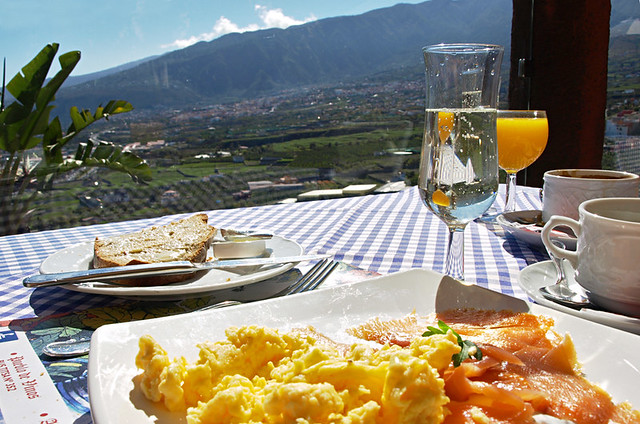 The food can be a bit hit or miss at the restaurants in El Monasterio, perched on a volcanic cone in the lower Orotava Valley, but it’s a place we’d still strongly recommend people visit. Taking friends and family there for a ‘last day’ cava breakfast has become a tradition. It is unique on Tenerife and an explore of the mock religious buildings and grounds is part of the experience before digesting the views from the appropriately named Café el Mirador. 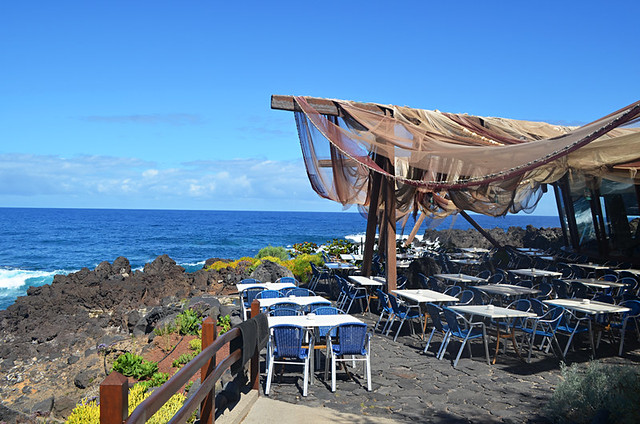 We were captivated by El Burgado in Isla Baja from the first moment we set eyes on its fishing net-covered terrace. I keep meaning to order a whisky and ice there, just so I can say “I’ll have whisky on the rocks on the rocks”. Sit on the terrace and look down the rugged coast towards the Teno Massif and, with the billowing nets above your head, it can feel like you’ve been marooned. 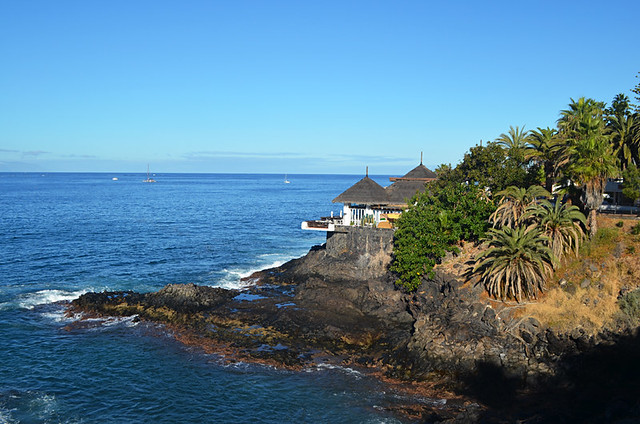 Views over resort areas don’t generally do it for me, but Las Rocas in Costa Adeje juts out to sea, aloof from the modern resort buildings at its back. At sunset, when the gaze is drawn outwards to tangerine and velvet blue skies above mysterious looking La Gomera, it feels as though you could be in a restaurant perched on a rocky outcrop in the middle of nowhere. 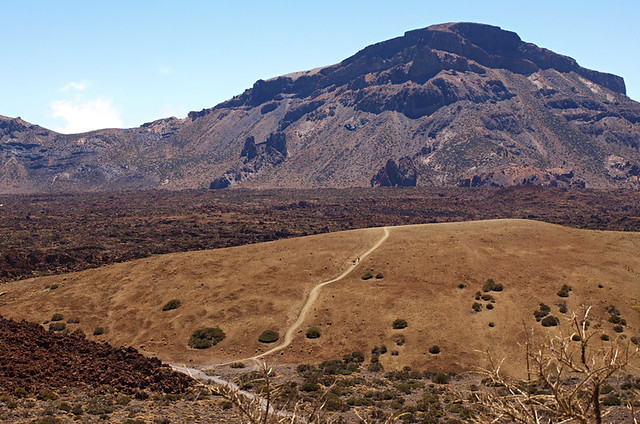 It can be manic, and the food mediocre and overpriced, but there’s no denying that tucking into a bocadillo beside the floor to ceiling windows overlooking Teide National Park from the cable car café at the lower station is a ‘wow’ experience. Clearly you get the same views by standing outside, but if it’s chilly up there those big windows act like a greenhouse. 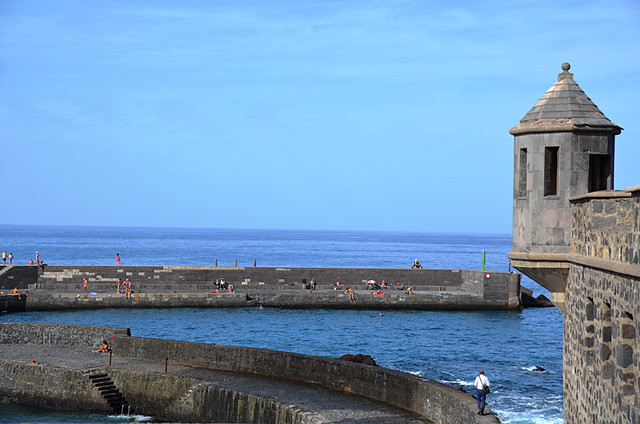 I celebrated my birthday with lunch at the Cofradia de Pescadores in Puerto de la Cruz on a warm and sunny December afternoon. It reminded just how special the place is. Not only do you get fantastically fresh fish and seafood you get views which, although not expansive, include the nicest old harbour on Tenerife and the town’s fort complete with cannon ready to repel piratical invaders. 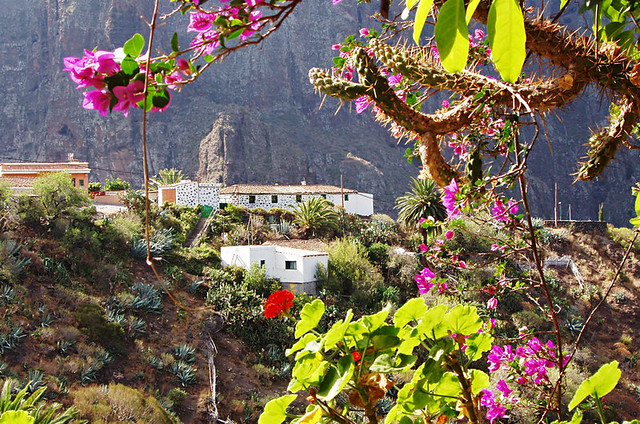 The classic view of Masca is the one looking down from the car park. However, you get an equally stunning view and a quite different perspective of one of Tenerife’s most picturesque beauty spots from Restaurant El Guanche in the hamlet’s former schoolhouse. They also serve delicious food which isn’t like the usual fare, using the best of local ingredients but no meat. 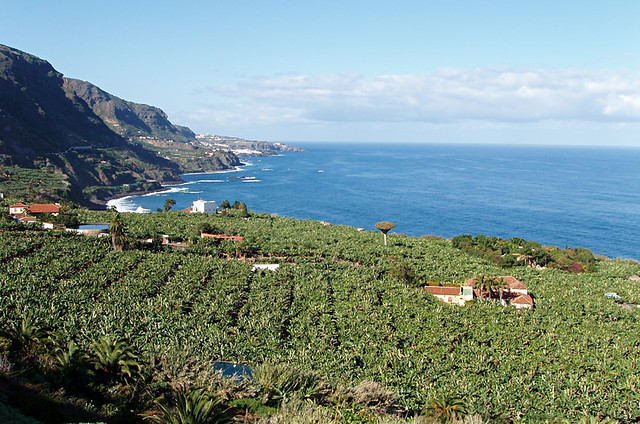 When the setting sun kisses your face at Mirador San Pedro all feels good with the world. Perfectly placed for a post-walk cerveza after exploring the Rambla de Castro it looks out over our favourite stretch of Tenerife’s coast, where the cliffs are dramatic and banana plantations carpet much of the land, their lushness broken only by a lone drago tree and colonial haciendas.

Like the preceding nine restaurants and cafés, it’s a treat for the eyes.