It’s one of those places we’ve wanted to try ever since it opened around three years ago but just never seemed to find the opportunity to do so. It seems ridiculous considering how close it is to where we live. But when Jack’s birthday dawned with another endless blue sky and toasty temperatures more befitting of September than the end of December, we set off to explore the Acentejo coastal path and then headed to Terrazas del Sauzal for lunch. 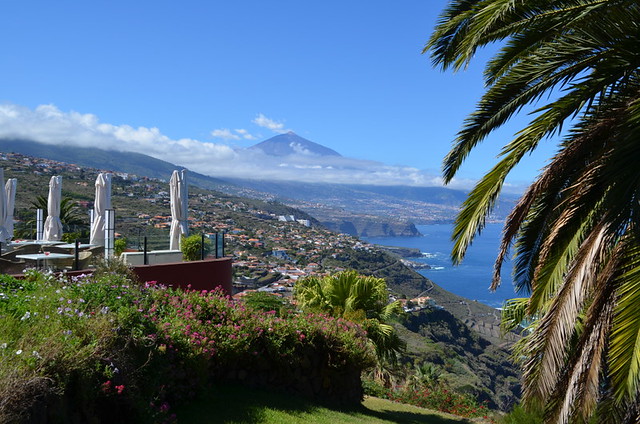 Where is Terrazas Del Sauzal?
It’s not particularly easy to find Terrazas del Sauzal, particularly if you don’t know El Sauzal. Coming from Puerto de la Cruz on the TF 1224, you have to turn sharp right  at the church, along Calle La Iglesia to find it. But once you’ve found it you won’t forget it. Perched high above the cliffs of the north west coastline, surrounded by beautiful gardens and with what must surely be one of the best views of Mount Teide on the island, it’s a stunning location by anybody’s standards.

Terrazas del Sauzal is set on two levels. The lower level is the elegant restaurant with its vaguely Regency style, fronted by floor to ceiling windows which look out over an outdoor dining terrace and swimming pool to that glorious view. On the upper level is the cocktail bar/brunch/lunch restaurant which occupies an expansive terrace and is furnished in contemporary chic, white tables and parasols with Rattan chairs and chill out areas of comfy sofas and coffee tables. 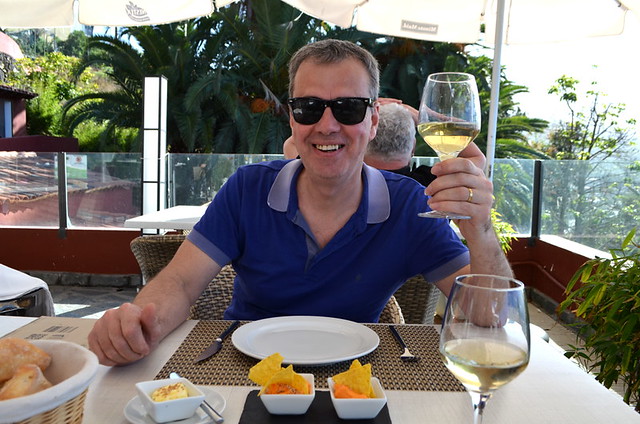 By the time we arrived, most of the tables that front the terrace were already occupied or reserved but we managed to grab the last front line table that still had shade, the heat of the sun being too much to bear full-on. There were a couple of tables that had optimum views but the sun was pouring beneath the parasol which was offering shade for the table but not its occupants. One of them had a middle aged couple at it when we arrived but within half an hour they had retreated to a shady table further back. The other remained resolutely unoccupied.

The Food at  Terrazas del Sauzal
There are three menus; a tapas/picoteo menu featuring ten dishes of traditional tapas including jamon Iberico, cheeses, croquettes, a mixed grill and of course, papas arrugadas; a brunch menu which is only served on Saturdays and Sundays and offers full Continental or a Cava breakfast with a mouthwatering selection of cold or hot dishes to select from. There’s also a children’s brunch menu and a gourmet option including such gastronomic delights as Eggs Benedict; and there’s the à la carte restaurant menu featuring 14 sensational starters, including five vegetarian options, followed by a choice of fabulous fish or meat courses and then seven delectable desserts. I’ll be honest, there was little on that menu I didn’t want to order. In the long run, we opted for three starters between us and hoped it would leave room for dessert. 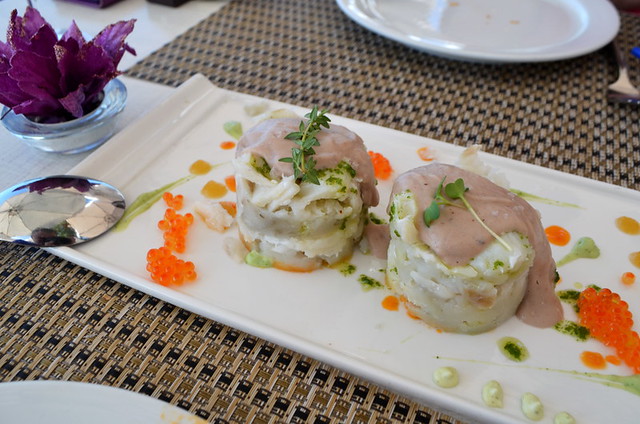 While we waited for our dishes the waiter brought a complimentary amuse bouche of orange butter with freshly made bread and almogrote with Doritos. I tried really hard not to eat all the bread but failed miserably and the waiter promptly brought more bread. I did manage not to eat the extra portion. First up was milhojas de bacalau, batata roja y cremita de castañas con mojo verde (cod and red sweet potato in chestnut sauce with green mojo). Moist cod, sweet potato and  creamy chestnut is a combination that was clearly made to appear on the same plate. Topped with a sprig of fresh rosemary that just lifted it all to greater heights, it was a resounding success. 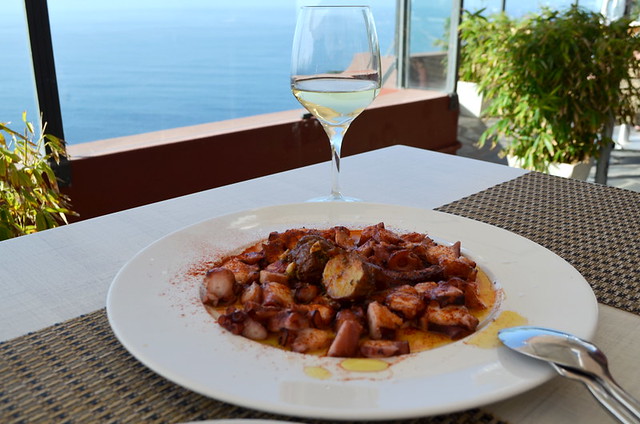 Next was pulpo a La Gallega con papas bonitas a nuestra estilo (the restaurant’s own interpretation of Gallega style octopus with potatoes). The octopus was beautifully tender,  infused with garlic and served with some of Tenerife’s famous little potatoes. Our final dish was pastel de berenjenas, espárragos trigueros, salsa de cebolla y aceite de curry (aubergine cake with asparagus, onion sauce and curry oil). The dish arrived with red pepper deep fried in fluffy batter rather than asparagus but certainly didn’t seem to suffer any ill effects as a result. The aubergine, red pepper and onion sauce were another taste sensation and the golden batter added a light, almost churros style crunch. We could have come to blows on equal sharing of this one were we not so thoroughly chilled out. 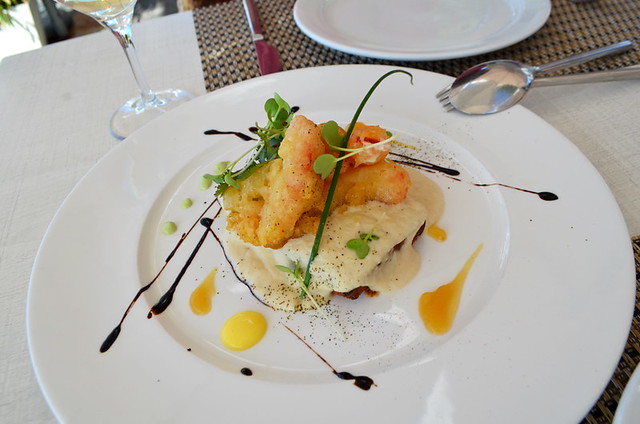 Sadly, by the time we were ready for dessert the restaurant was rammed, with just about every table taken except those that were in full sun, and the waiter took an inordinate amount of time to get back to us. I guess we could have tried to attract his attention but we were happy to just sit and soak up the atmosphere while we finished our chilled bottle of white wine. By the time he finally got to us, the dessert urge had gone off. A victory for the calorie count.

There’s no denying Terrazas del Sauzal is a bit pricey for an everyday lunch but it’s equally undeniable that everything about it is top notch. For us, it was the perfect birthday lunch venue and one we fully intend to return to, possibly to enjoy a brunch with the next visitors who come to stay. This is not a fast food outlet. Sit back, relax and enjoy. 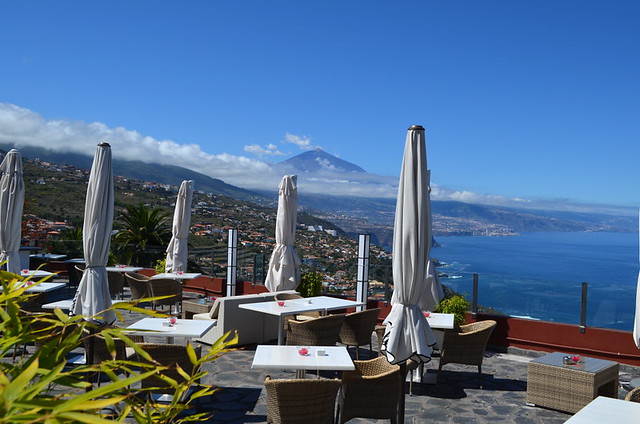